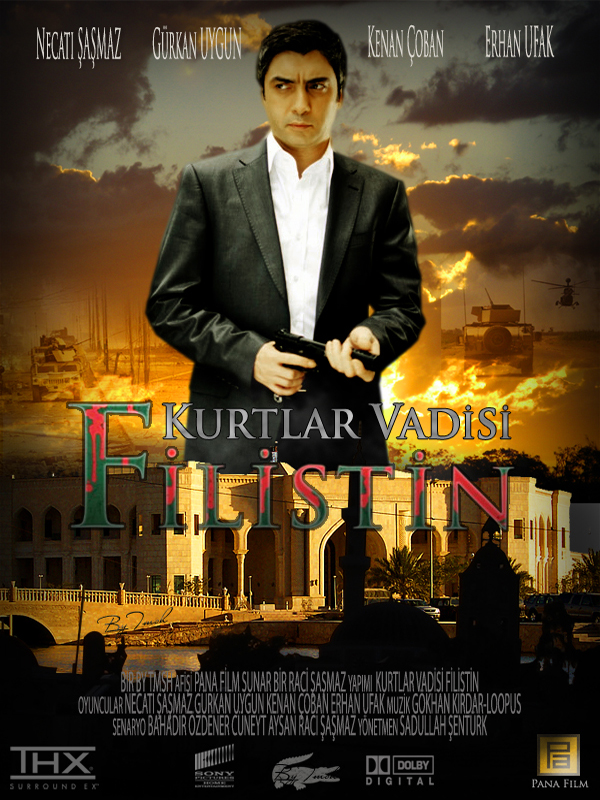 Poster for "Valley of the Wolves: Palestine"

Just a few days after the Turkel committee cleared the IDF of any wrongdoings during its raid of the Gaza-bound Mavi Marmara, the most expensive Turkish film ever made hit the theaters across Turkey and the rest of Europe.

The film, “Valley of the Wolves: Palestine”, is the second in a series of movies depicting the dashing Polat Alemdar taking on bad guys – and winning. The movies are based on a very successful TV series, which in the past have caused much tension in the already-strained relations between Turkey and Israel.

Israeli officials have said the films are not only anti-Israel, but anti-semitic as well. The first movie, “Valley of the Wolves: Iraq”, even featured a Jewish doctor harvesting organs from dead Iraqis. The doctor was played by no other than Gary Busey.

The new movie depicts Alemdar coming to Israel to avenge the death of his fellow Turks on the Mavi Marmara. Lots of blood, lots of violence and lots of preaching. One thing that really got Israelis going was the production’s decision to release the film on January 27, the international Holocaust Day.

Some of the exchanges are classic. For example, when Polat is asked by an Israeli soldier what brings him to Israel, he answers “I didn’t come to Israel – I came to Palestine!”. Or when he confronts his nemesis who tells him he won’t escape the Promised Land, Alemdar answers “I don’t know which land was promised, but I promise you its graves!” Take a look at the preview.

As I watched, I felt something familiar. That feeling you get when the good guy gets the bad guy. And I remembered another movie, from the 80’s, that always brought those feelings home. It was Rambo. It was just before the end of the Cold War, and Stallone was killing Vietnamese and other Communist scum by the dozen.

Israelis are the Turk’s “bad guys” these days. As a young adolescent growing up in Israel and America, the dirty “commies” were my bad guys back then. And they could be depicted in any fashion. Any commie was the filth of the earth, and they all deserved to die. And I remember watching Rambo shooting guys, and stabbing them and choking them slowly. And I remember smiling when he did it. I liked it when he won. When he got the bad guy.

Now I know how the Turks feel when they watch Polat kick some Israeli ass.