A selection of articles and stories about asylum seekers and refugees in Israel on the occasion of World Refugee Day. (Full disclosure, I couldn’t include just 10) 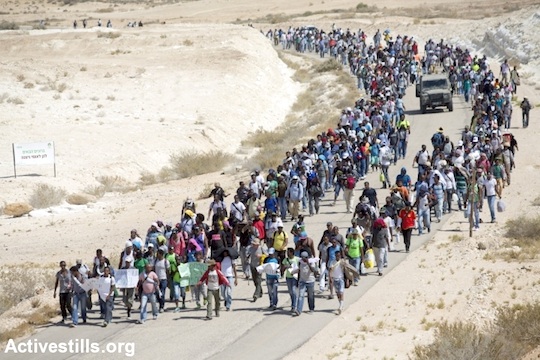 African asylum seekers march from the Holot detention center, in which they are jailed, to the Israeli-Egyptian border in protest of Israel’s asylum policies, June 27, 2014. (Yotam Ronen/Activestills.org)

It has been more than a decade since refugees from Darfur first began making the dangerous journey across the Sinai desert in order to seek asylum in Israel. Since those early years, Israeli society and successive Israeli governments have become increasingly hostile toward the asylum seekers from Sudan, Eritrea and elsewhere who sought safety and dignity in the country.

On the occasion of World Refugee Day, here is a selection of articles about African refugees in Israel over the years. Since +972 Magazine was founded, we have always put special emphasis on telling refugees’ stories, letting refugees tell their own stories, and documenting their struggles in Israel.

The following list is organized semi-chronologically, with the most recent issues and coverage presented first. Also, check out our full collection of articles on refugees and asylum seekers in Israel.