Israel is threatening to bisect the West Bank by building in the E1 area, between the settlement of Ma’aleh Adumim and Jerusalem. A photographic journey shot in medium format film – starting east of Jerusalem, through the west of the city and all the way to Tel Aviv – provides portraits of how different rights are extended to different people under Israeli rule.

By Mareike Lauken and Keren Manor 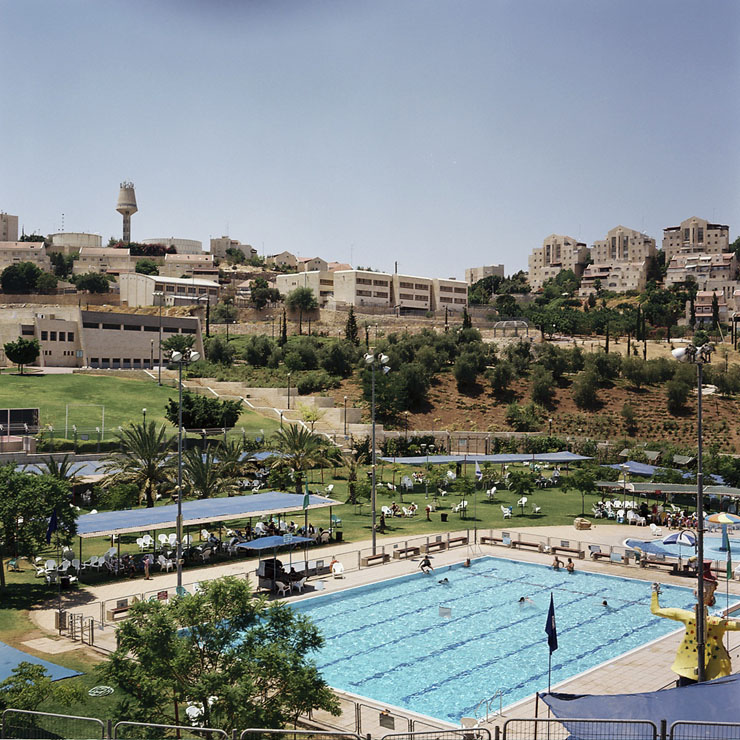 Our journey begins in Ma’aleh Adumim, one of 124 Israeli settlements established in the Occupied Palestinian Territories since 1967. With its green lush palm trees, olive tree roundabouts and parks, the settlement of Ma’aleh Adumim stands in stark contrast to the surrounding semi-arid environment. 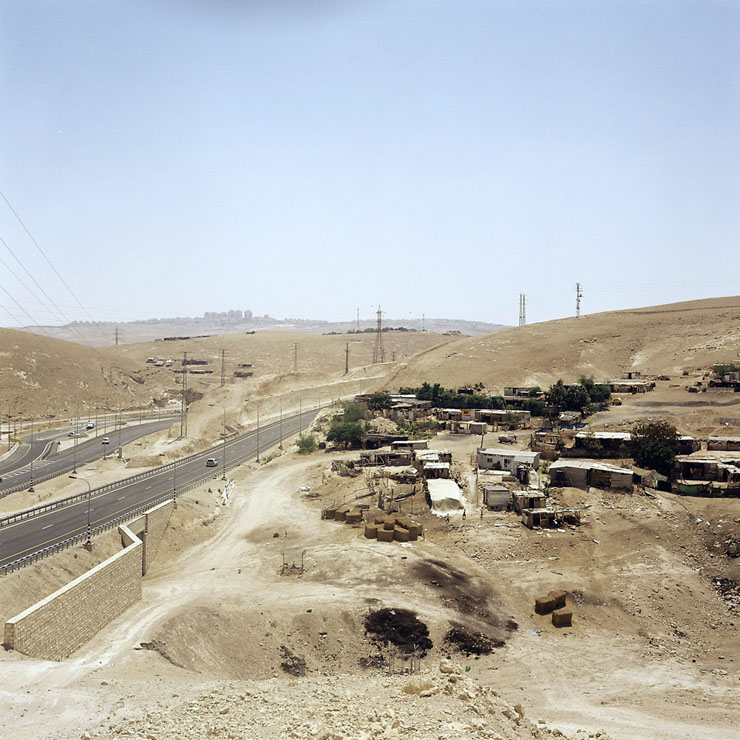 Khan al-Ahmar is a Bedouin encampment in the West Bank, between the illegal Israeli settlement of Ma’aleh Adumim and Kfar Adumim. The families living in Khan al-Ahmar are from the Jahalin Bedouin tribe who fled from the Negev during the 1948 War. The encampment was slated for demolition in February 2010 due to allegations of illegal buildings.

Not far from the settlement we find the Arab al-Jahalin Bedouin communities, who live with no access to water or electricity services, while facing the constant fear of being displaced for the second or third time. 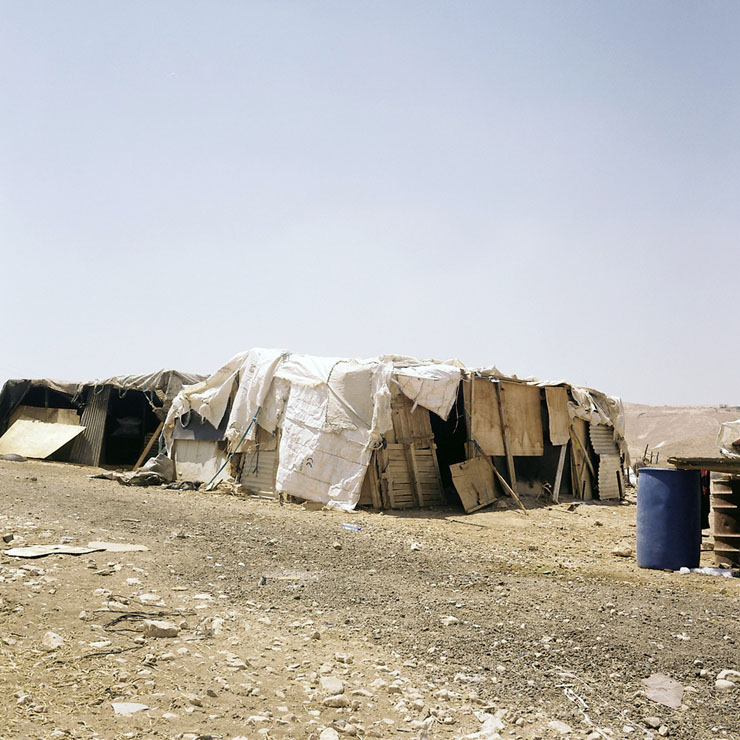 The Palestinian Bedouin communities of the Arab al Jahalin tribe are at an exceedingly growing risk of forced ethnic displacement. The communities have been informed by the Israeli Civil Administration that they have no option but to leave the area, as part of a larger plan to relocate Bedouin communities living in Area C, where Israel retains control over security as well as planning and zoning. 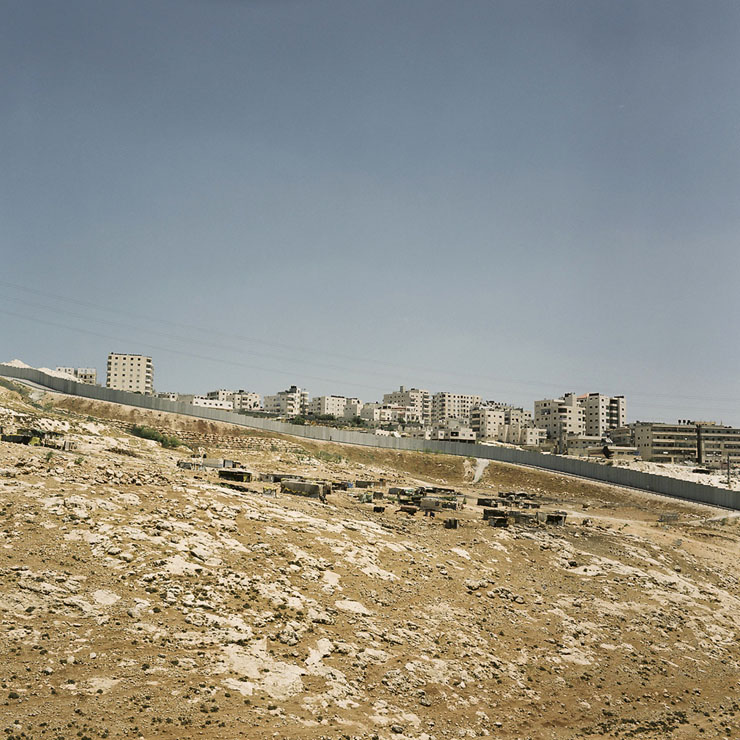 Anata is a town northeast of Jerusalem, which is divided into three areas; the Jerusalem municipality, Area C and Area B. Large areas of Anata’s land have been confiscated or destroyed in the process of constructing the separation wall and bypass roads. The wall and bypass roads will separate Anata from its eastern lands, which constitute the majority of the village’s lands and will surround Anata from all sides, together with the Shuafat Refugee Camp and Dahiyat Assalam.

As we drive towards Jerusalem we can see on our right a new section of the Israeli separation wall, and we cross to the “other side” through a new checkpoint. It seems that the opportunities for normal life for the people in the Shuafat refugee camp are even more obstructed than before. 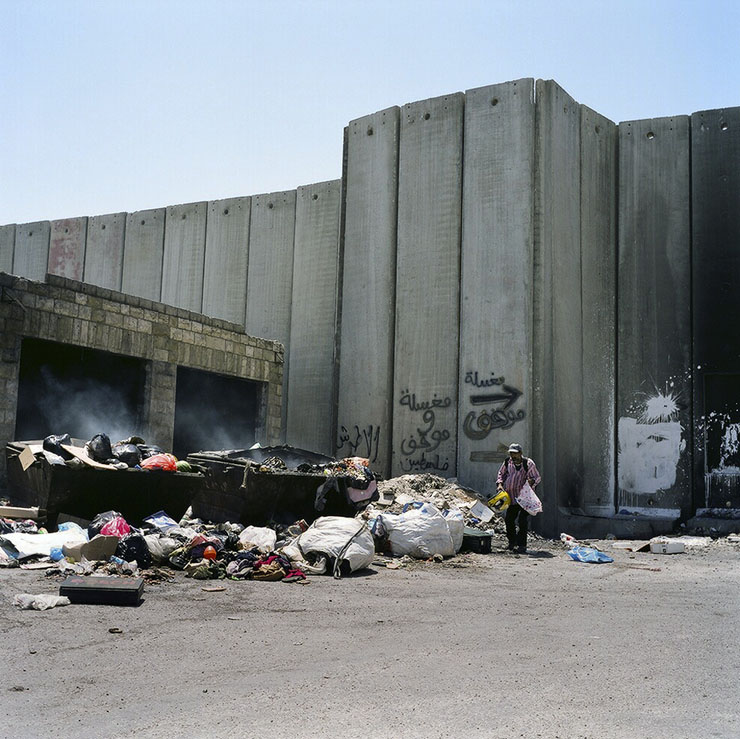 The Shuafat Refugee camp is the only Palestinian refugee camp located inside Jerusalem municipality. While its residents carry Jerusalem identity cards, which theoretically grant them most of the same privileges and rights as Israeli citizens, the camp itself is largely serviced by the United Nations Relief and Works Agency (UNRWA). 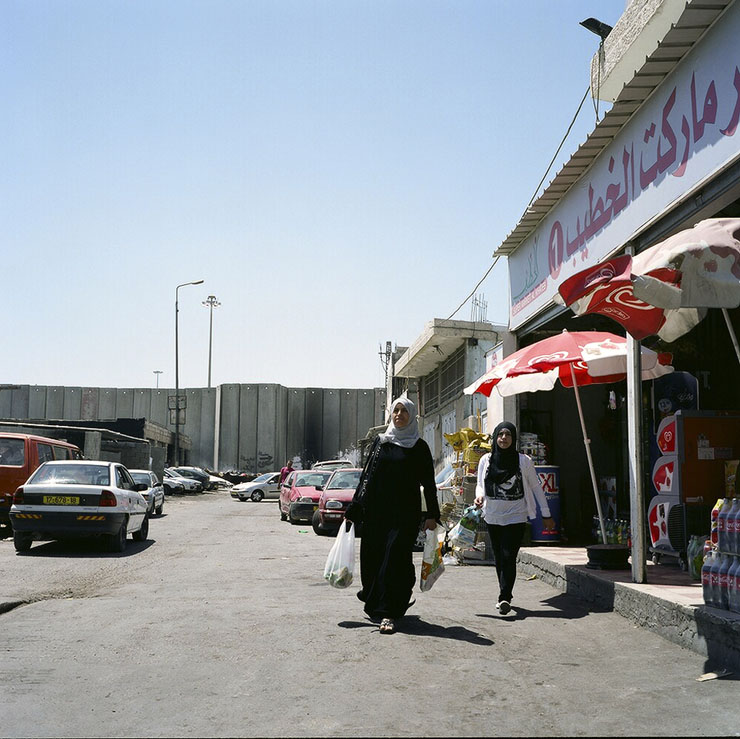 The separation wall in the Shuafat refugee camp and the new permanent military terminal located at the entrance to the camp will separate more than 20,000 Palestinian Jerusalem residents from East Jerusalem, and directly affect their access to their schools, workplaces and other facilities and institutions.

We cross the checkpoint again, and this time we are stopped by the Israeli soldiers. Half an hour later, we are allowed to continue to Jerusalem, since we have the “right” passports. 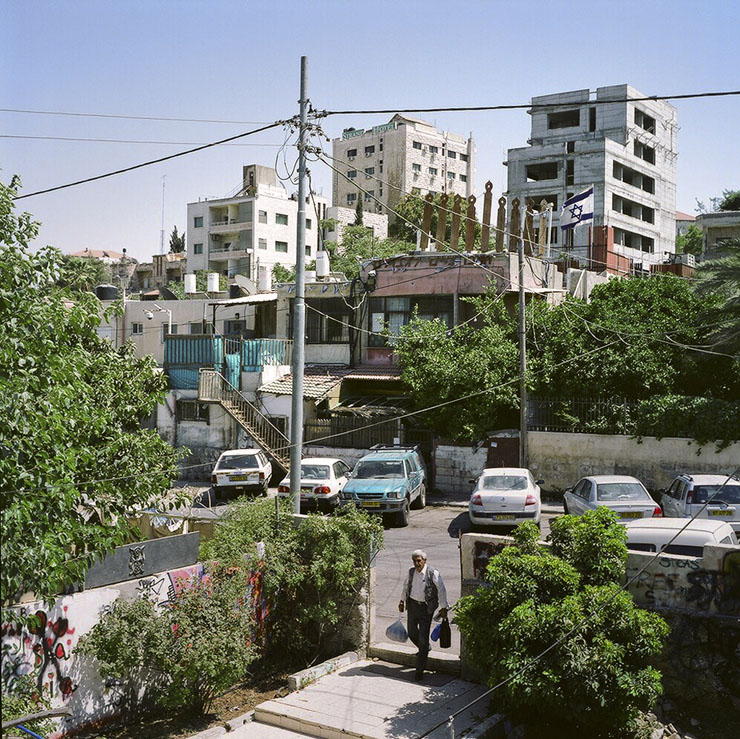 Nabil Al-Kurd enters his family house in Sheikh Jarrah. The Palestinian residents of Sheikh Jarrah, refugees from the 1948 war, were settled in the neighborhood by the Jordanian government that ruled the area till 1967 and the United Nations Relief and Work Agency for Palestinian Refugees (UNRWA). The Al-Kurd family, like other Palestinian families in the neighborhood, were evicted from some of their homes, and Jewish settler families moved in based on an Israeli Supreme Court ruling that the property was owned by Jews. 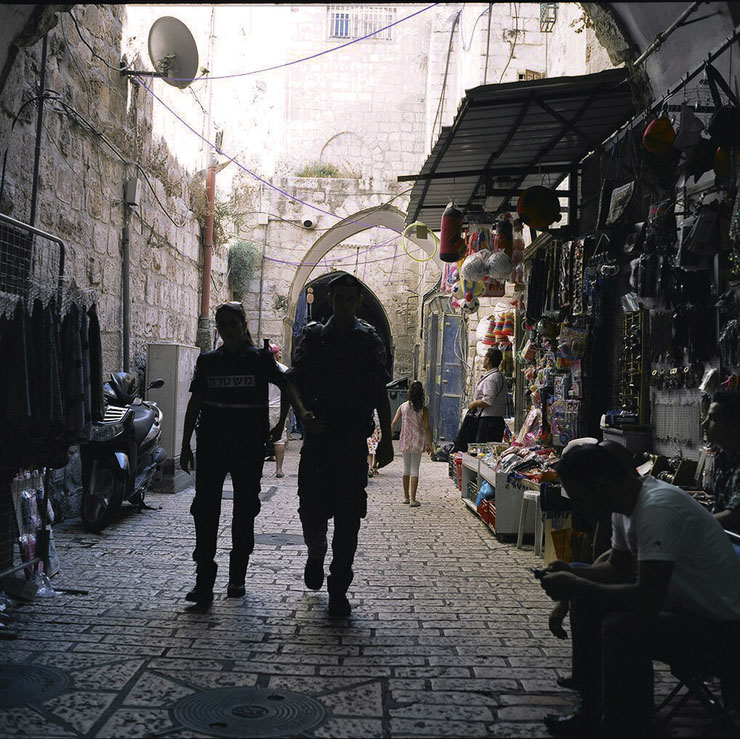 We cross the city from east to west. Despite the fact that in Israel, the annexation of East Jerusalem is considered to have “reunified” the city, we found two very different realities in East and West Jerusalem. In the eastern part, we see neglected neighborhoods, a massive police and army presence, traces of demolished houses and more new segregated Jewish settlements. Life in the west seems much more comfortable. 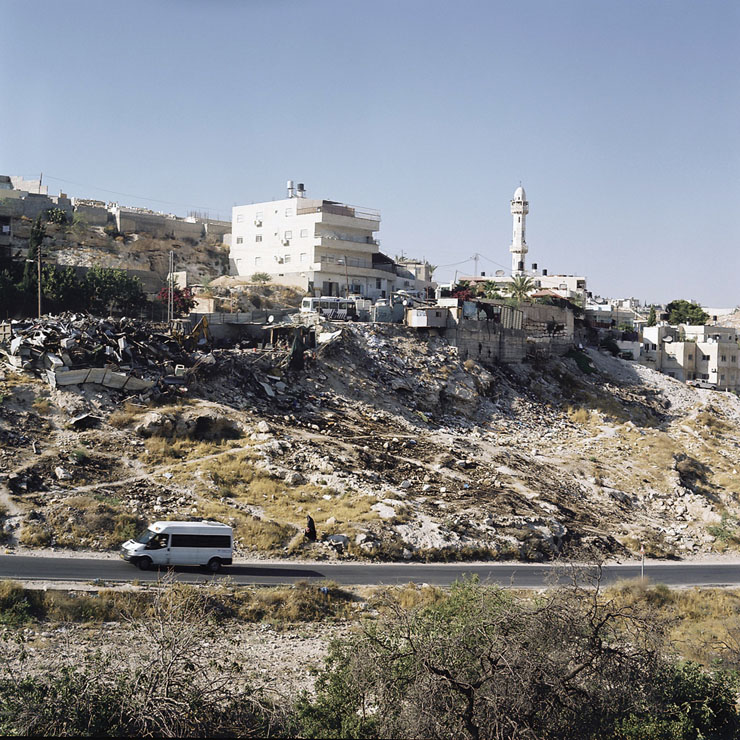 Jabel Mukaber is a neighborhood in East Jerusalem. East Jerusalem residents are required to pay taxes like all city residents. However, they do not receive the same services. The Jerusalem Municipality has continuously failed to invest significantly for infrastructure and services (such as roads, sidewalks, water and sewage systems) in Jerusalem’s Palestinian neighborhoods. 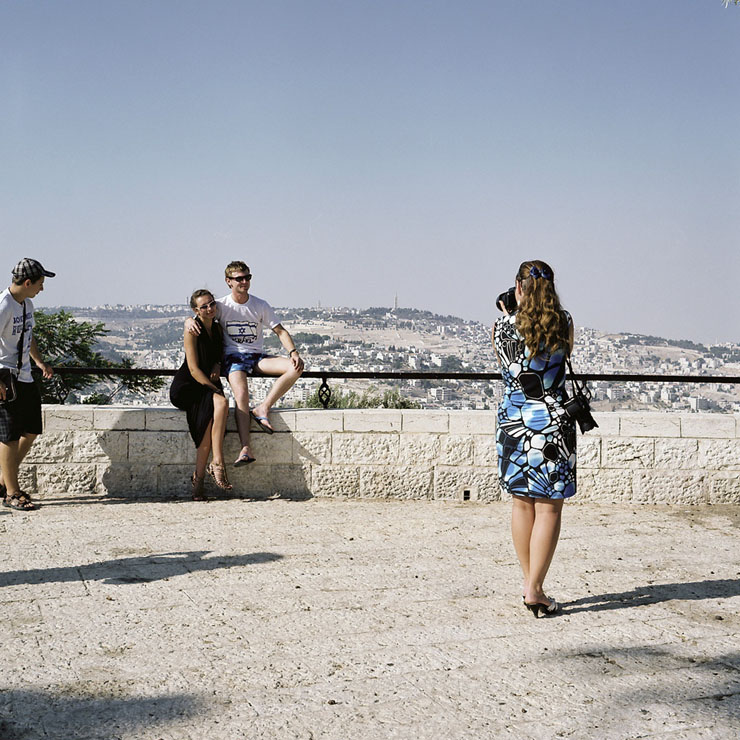 Armon Hanaziv (also known as East Talpiot) is an illegal settlement annexed to Israel during the 1967 war. It was established in 1973 and around 15,000 people currently live in the neighborhood. Development of the settlement in 2006 worked to create a belt around Jerusalem to ultimately sever East Jerusalem from the West Bank. 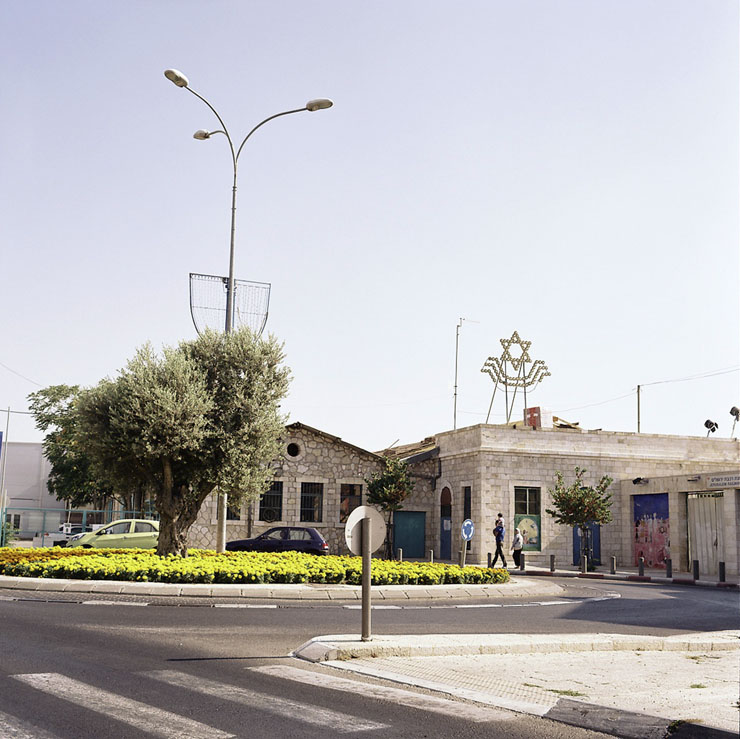 Following the 1948 war, Jerusalem was divided into two — the western portion, populated primarily by Jews, came under Israeli rule, while East Jerusalem, populated mainly by Muslim and Christian Palestinians, came under Jordanian rule. Today, the status of Jerusalem remains one of the core issues in the Israeli–Palestinian conflict. 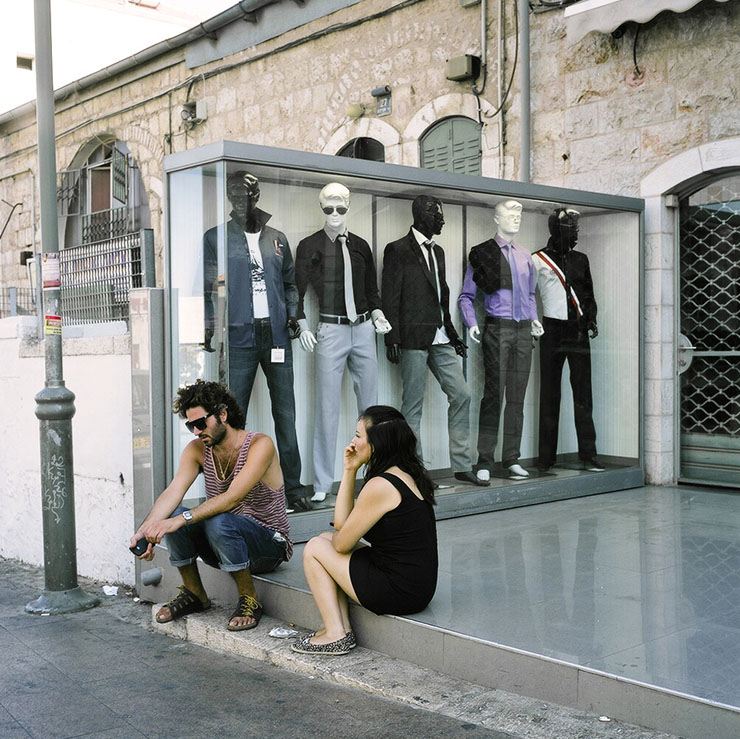 A street in West Jerusalem. 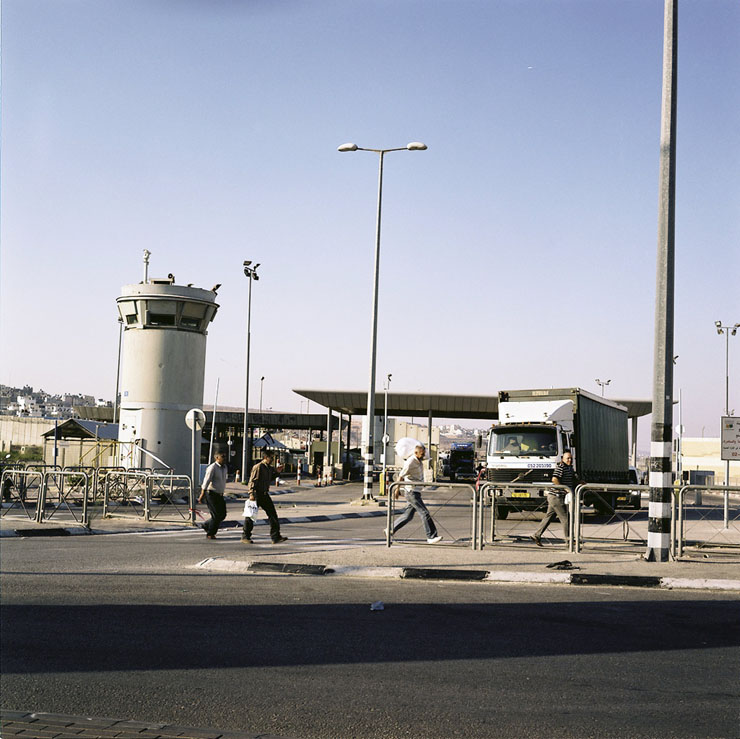 Qalandiya checkpoint is one of the largest Israeli military checkpoints in the occupied West Bank. It separates Ramallah residents from southern Palestinian towns and the northern Palestinian neighborhoods of Jerusalem. The crossing is only to be used by Jerusalem ID holders, foreigners and Palestinians with special permits to enter Israel.

We go out of the city and reach Qalandiya checkpoint in the late afternoon. The few Palestinian workers who have a permit to work in Israel are passing the checkpoint on their way home. 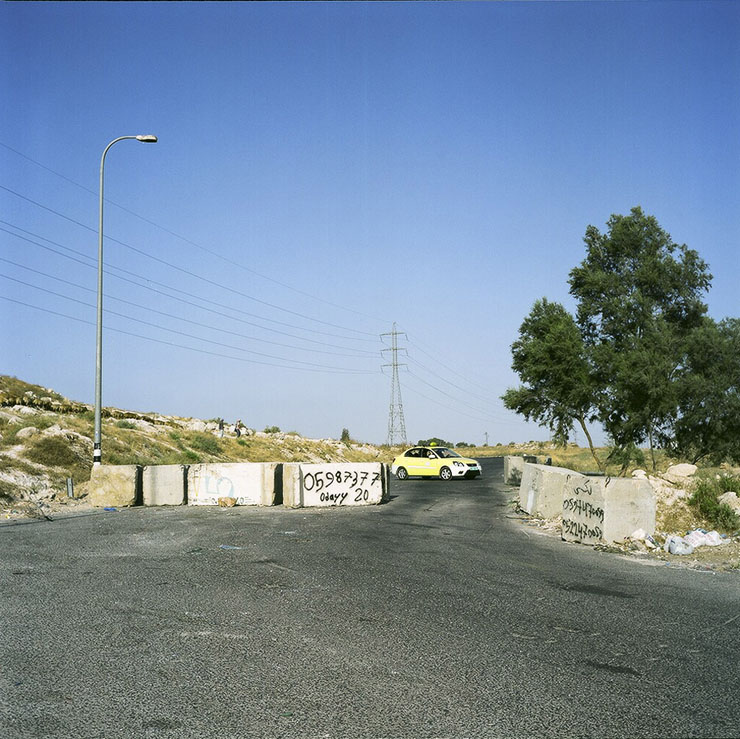 An open roadblock on an access road connecting Palestinian villages with Route 443. In 2002, Israel prohibited Palestinians from using the road by placing physical obstructions like iron gates, concrete blocks and checkpoints. In 2009, Israel’s High Court of Justice accepted the Association for Civil Rights in Israel’s petition against an Israeli army order barring Palestinians from driving on Route 443. 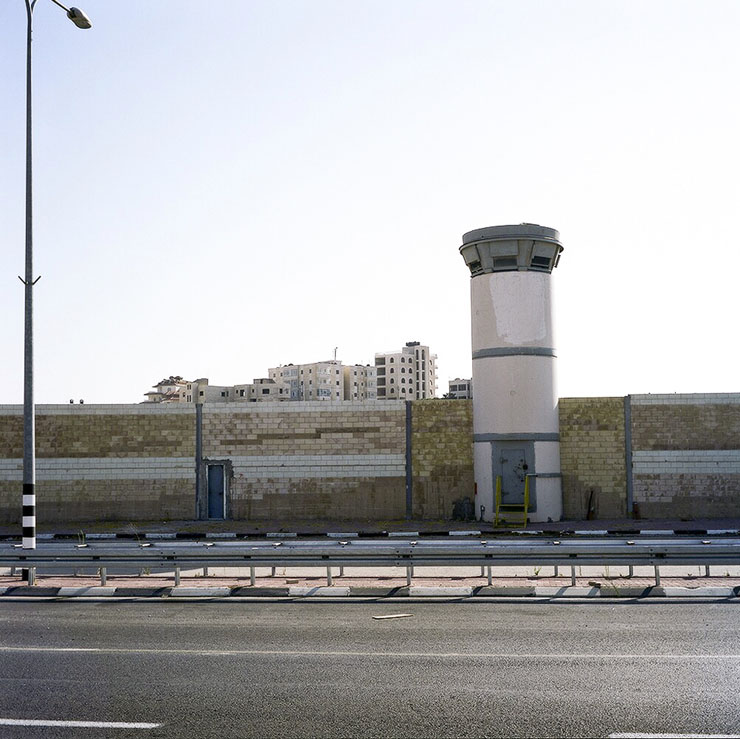 Route 443. Israel paved the road in the 1980s, using 14 kilometers of an existing route in the West Bank as part of the road. This 14-kilometer stretch, which is about half the length of the entire road, served for decades as the main Palestinian traffic artery in the southern Ramallah District. Israel expanded the existing route by expropriating thousands of dunams of public and private land belonging to Palestinian residents of villages in the area. The usage of this road is highly problematic for Palestinians, though they do now have a legal right to use it.

We continue to Route 443 on our way home.  The sun is going down. We can already see the skyline of Tel Aviv only 30 km from the fences, roadblocks, watchtowers, settlements, and checkpoints that accompany us on our way out of the West Bank. 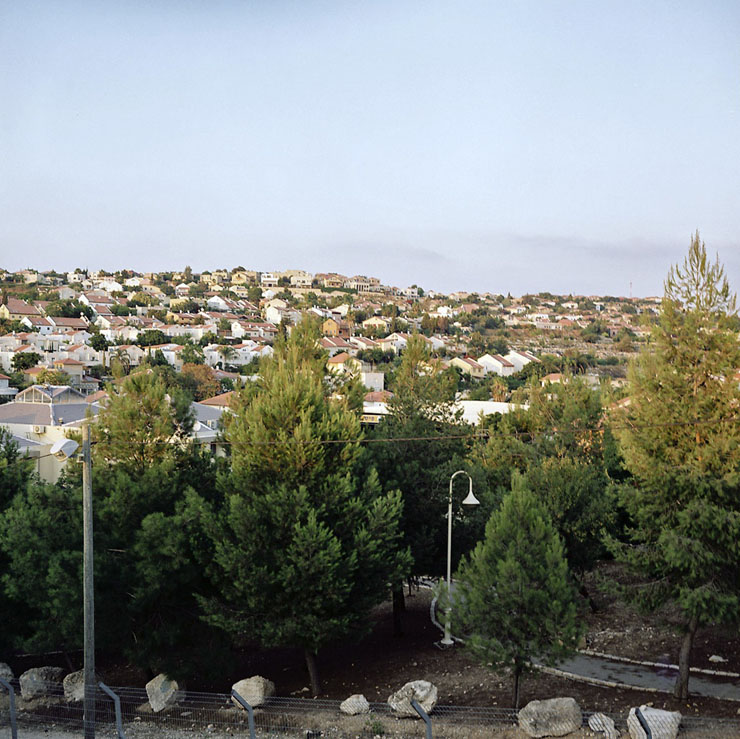 Lapid settlement was established in 1996. It was built on a strip of land designated as a no man’s land. Before 1967, this territory did not belong to either Jordan or Israel. 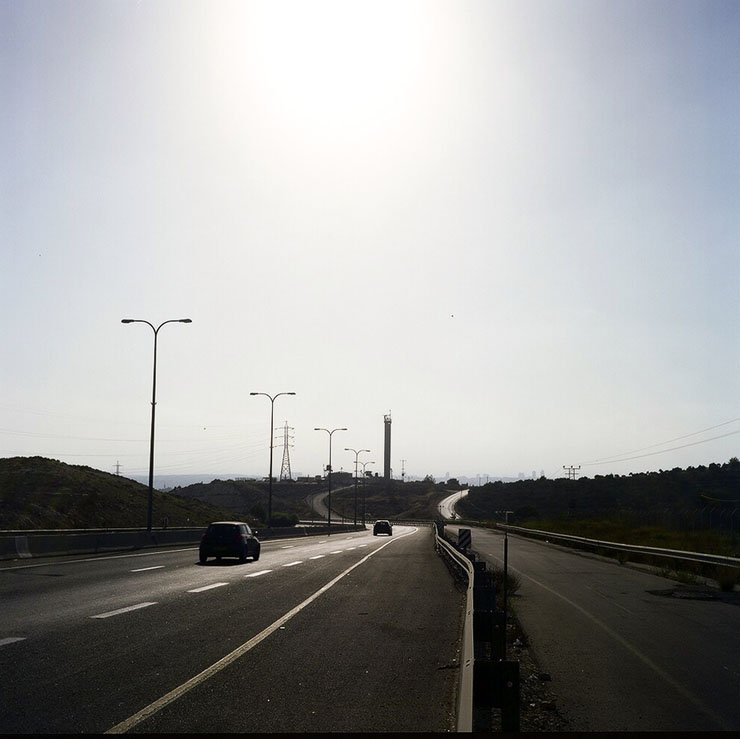 Although it is located in the occupied territories of the West Bank, Route 443 is used daily by thousands of Israelis, as it is an alternate route to the main Jerusalem-Tel Aviv road (Highway No. 1), which is generally over-crowded with traffic. 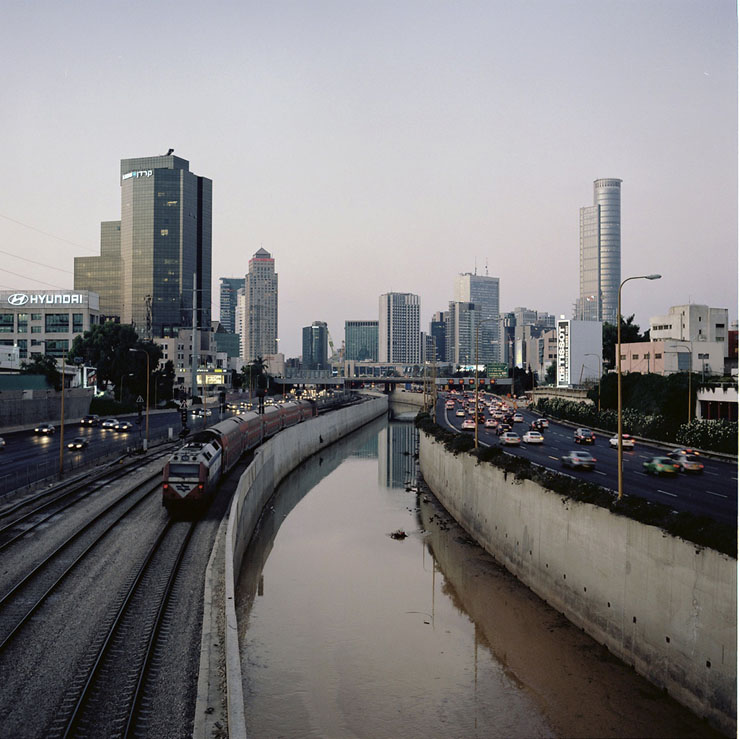 Tel Aviv is the second most populous city in Israel, founded in 1909 by Jaffa’s Jewish community. It is the country’s financial capital, the second-largest economy in the Middle East, and the 31st most expensive city in the world.
Get Our Weekly Newsletter

emailemailemail
Before you go…
A lot of work goes into creating articles like the one you just read. +972 Magazine is nonprofit journalism, owned by many of our writers, editors, and journalists. In order to safeguard that independent voice, we are proud to count you, our readers, as our most important supporters. With your support, we can keep +972 Magazine a strong, independent, and sustainable force helping push the global discourse on Israel/Palestine.
DONATE
More About Jahalin 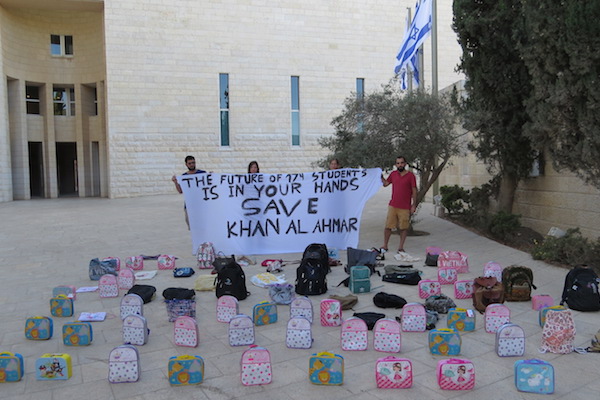 As Israel prepares to demolish Bedouin school, activists lay out backpacks for each student
As Israeli authorities prepare to demolish Khan al-Ahmar’s school, a group of activists lay backpacks outside Israel’s Supreme Court — one for each student who may soon find himself without a place to learn.  A group of Israeli and foreign Jewish activists laid 174 backpacks outside Israel’s Supreme Court in Jerusalem on Tuesday morning as…
By Edo Konrad July 10, 2018 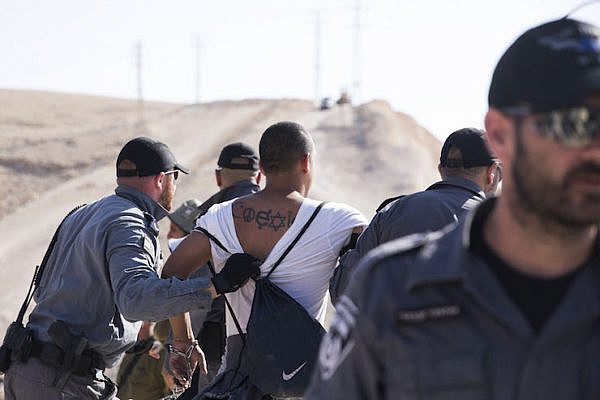 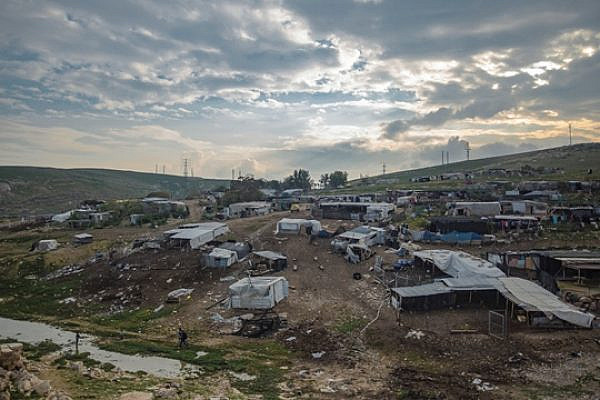 The Bedouin village where compassion ends
The Palestinian residents of Khan al-Ahmar are facing the threat of expulsion from their homes in the West Bank. No matter how hard they tried to ingratiate themselves with their settler neighbors, nothing seemed to help.  Sukkot is a lovely holiday. For seven days we play pretend: building ornate sukkot tabernacles in the safety of our…
By Orly Noy October 6, 2017