“Firing Zone 918” is the Israeli military’s term for a portion of land in the West Bank home to hundreds of Palestinians who have been there since the 19th century. Why are they under threat of eviction and how is it being done? A primer. 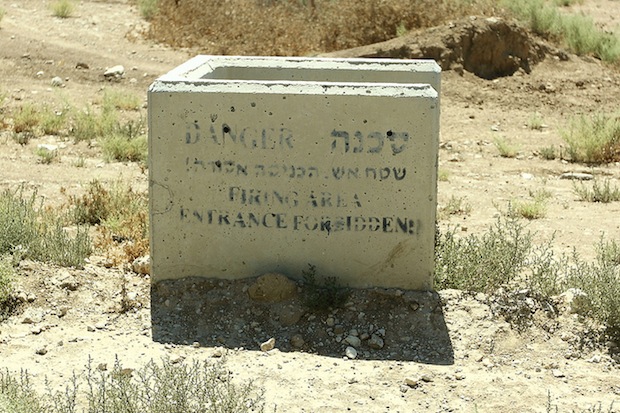 “We must maintain “the necessary fitness of the IDF”

This is the reason that the State of Israel has given for its recent order by Defense Minister Ehud Barak to destroy eight Palestinian villages and expel 1,500 residents from their land in the southern West Bank. “Firing Zone 918,” which the Israeli military wants for so-called training, includes 30,000 acres of private and agricultural land in the South Hebron Hills. The Palestinian residents have lived and worked on these lands for generations. Since 1999, the threat of expulsion has hovered over their heads. The destiny of these villages will soon be decided.

1. A chronicle of expulsion and legal developments

Israel declared the area a “closed military zone” in the mid-1970s. In 1999 the Civil Administration issued demolition orders for dozens of buildings, and during October and November of the same year, Israeli authorities expelled over 700 residents from their homes and confiscated their property. Throughout the operation of expulsion the security forces sealed caves and demolished tents, wells and toilet structures. Four months later the Israeli High Court of Justice ordered to allow the people to return to their land and forbade their expulsion pending a final decision. The defense minister and the general of the central command at the time tried to uphold the expulsion, partially to keep the area under Israeli control in negotiations.

In 2005, after the arbitration process ended with no agreement, the hearings resumed in an effort to avert the new demolition orders issued by the Civil Administration. (For the sequence of legal proceedings during these years and to witness the violence of security forces and settlers against the villagers facing eviction, click here.) For the next seven years, the interim orders temporarily thwarted the destruction of the villages.

Last July, the state informed the High Court that the defense minister’s position was that “permanent residency will not be allowed” in most of the area designated as a firing zone and that eight of the 12 villages originally included in the warrant will have to be evacuated. For procedural reasons unrelated to the fundamental arguments presented by the attorneys, the High Court ordered that the petitions be annulled. However, the interim order prohibiting the demolition will remain intact, and the residents will submit new petitions before its final date.

60.2 percent of the West Bank is designated as “Area C,” according to the Oslo map that was drawn up in the framework of the interim agreement signed between Israel and the PLO in 1995. This map, which was supposed to be applied for five years during which a final-status agreement would be reached, was designed around one central principle: demography. The division of the West Bank into three separate areas enabled the transfer of control over large swaths of the Palestinian population to the Palestinian Authority, while at the same time preserving large and sparsely populated [by Palestinians] swaths of territory under complete Israeli control.

Since Oslo, almost two decades ago, Israel has cemented a consistent policy in Area C, the goal of which is the deepening and eternalizing of Israeli control over the area. This policy both unilaterally determines the future of the West Bank, and diminishes Palestinians’ ability to live in Area C. This policy is enacted through a number of different methods:

– The declaration of National Parks and Nature Reserves

– Sealing off territory and declaring it as an “Army Training Zone”: About 18 percent of the West Bank has been declared a “firing Zone.” which is slightly more than the entire territory contained in Area A, where all of the major Palestinian cities are located. Five thousand people from 38 different communities live on these lands. Most of them lived there before their land was declared a “firing zone.”

Such consistent discrimination is carried out, inter alia, through the exclusion of Palestinians from planning mechanisms (in contrast to the 20 local planning commissions designed to serve Jewish settlers). It has created a reality in which, between 2007 and 2010, the Civil Administration provided a total of 64 building permits to Palestinians in Area C, whose population is around 150,000.

Discernment between the different methods used to dispossess Palestinian residents from their lands is important for legal proceedings and for recognizing the overarching and unified policy that stands behind all of these different methods. In a report published by the EU at the beginning of the year and endorsed by every single member state, Israel’s policy was called “forced transfer of an indigenous population.” In large part due to this policy, Area C is home today to less than 6 percent of the Palestinian residents of the West Bank, whereas before 1967, between  200,000 and 320,000 Palestinians lived in the Jordan Valley (in what is today Area C).

3. The expulsion of residents and the demolition of villages: international law vs. the state of Israel

Demolition of “life-sustaining infrastructures” –  eight villages in this case – actually means the forced expulsion of residents, who are defined as a protected population. This expulsion is contrary to the Fourth Geneva Convention (Article 49) and the Hague Conventions. International law experts state that a violation of this section of the Convention is a war crime. It was also determined that “even indirectly creating circumstances that cause a protected people to leave shall be prohibited.” There are individual exceptions to this ‘absolute prohibition.’ whose terms do not apply in this case, as they are reserved for use during periods of population transfer, and the transferees reserve the right to be immediately returned to their land after the battles in the region end. Futhermore, Article 54 of Protocol I Addition to the Convention explicitly states that there is a prohibition on the destruction or damage to buildings necessary for the survival of the protected civilian population.

Against these very clear cut provisions, Israel is trying to justify its position on the grounds that the vitality of the area allows it to preserve “the necessary fitness of the IDF.” Evacuation orders handed to residents are based on the state’s claim that the villagers are not permanent residents of the area, and therefore should not be without a permit in the firing zone. This argument ignores historical records proving the existence of villages, which are the “center of life” of the residents for centuries, and at the latest since the 1830’s. A survey conducted in 2005 found that 88 percent of residents were born in the caves located in a “closed area.” One of the studies documenting the existence of the villages since that time, “Life in the Caves of Mount Hebron,” was published in 1985 by the Defense Ministry.

4. Whose struggle is it?

The existence of a regime of separation through discrimination is nothing new in the South Hebron Hills, or in Area C in general. For example, while the threat of demolition hovers over the heads of the inhabitants of these eight villages, the 10 settler outposts located partially or entirely within the “firing zone” are under no such threat.  Futhermore, the IDF recently confiscated vehicles belonging to Palestinians since traveling in a “firing zone” defined as a “closed military zone” is a violation of a military order prohibiting traffic in the region.” Not so for the residents of the settlement Avigail,  whose only road winds through those very territories defined as a “closed military zone.”

The economic consequences of Israel’s systematic discrimination are equally as sharp: the failure to develop industrial zones, agriculture and housing in Area C casts doubt on the viability of a Palestinian economy. These restrictions are in sharp contrast to the government budget that settlers in the region have access to.  At the top of the list of 253 local and regional councils, which are ranked according to government investment to residents, are five councils encompassing settlements, with the first place going to the Mount Hebron Regional Council.

While some forms of discrimination are rectifiable, this is not the case when it comes to the destruction of villages, loss of land and the forcible transfer of a population to a nearby city, which will secure them lives of unemployment and poverty. Maintaining the status quo through such actions prevents the reality of a two-state solution on the one hand, and on the other embodies the darkest face of a single regime in a shared space. Resistance to this cannot nor should not be fought by only the 1,500 threatened residents, but by all who see such actions as a humanitarian disaster, as an injustice and as a real danger to our futures.

The defense minister’s decision to destroy the future of the villages and the unique lifestyle of the residents can still be prevented.  Israel should cancel the program of destruction of villages and expulsion of its residents, to allow planning and construction to be held in conjunction with Palestinian representatives of the area, and to allow free access to and from the villages.

Eyal Raz is a political activist from Jerusalem. This article was originally published in Hebrew in Haoketz. For more information on this struggle and to take part, visit the Facebook page.
Get Our Weekly Newsletter 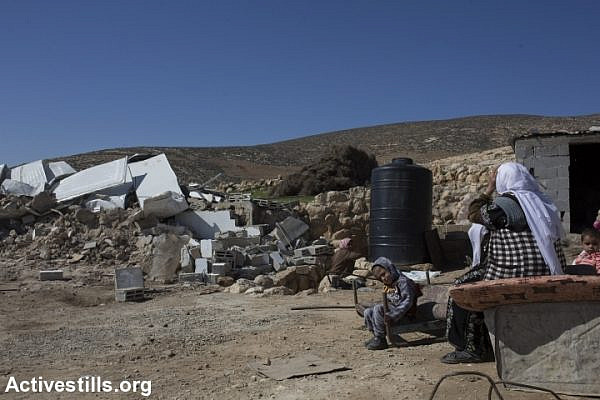 Court to decide fate of Palestinian villages in ‘Firing Zone 918’
Hundreds of Palestinians in the south Hebron hills are living under the fear of imminent displacement because the Israeli army says it wants to conduct live-fire drills on their village lands. Israel’s High Court of Justice on Wednesday will hear the case of eight Palestinian villages fighting looming demolition and displacement by the Israeli army…
By Edo Konrad January 9, 2017 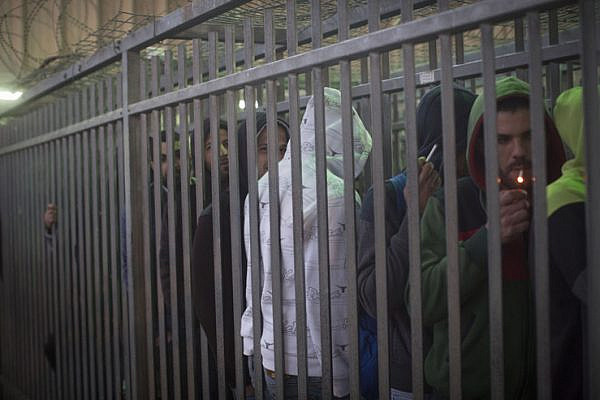 Most Israeli Jews think there’s no occupation. So what is it?
A recent poll finds that 72 percent of Jewish Israelis believe Israel’s control over the Palestinian territories does not constitute occupation. So what do you call military rule over a captive population that didn’t vote for the army to be there? Depending on who you speak to, the word “occupation” is either the most loaded…
By Natasha Roth-Rowland May 11, 2016 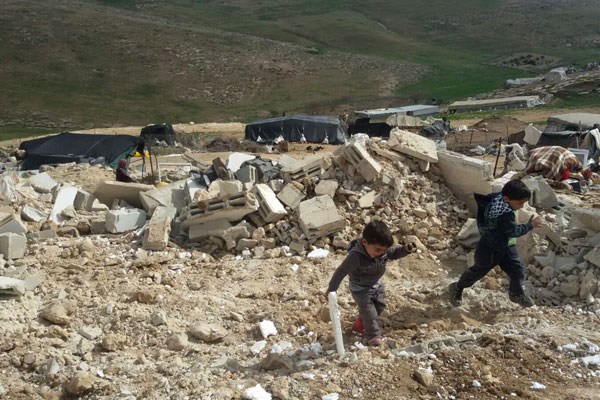 WATCH: Living in the looming shadow of expulsion
‘Firing Zone 918’ in the south Hebron hills is home to around 1,300 Palestinians, most of whom live in caves or shacks and make their living from agriculture and shepherding. Since 1999, the residents have been living under threat of demolition, dispossession, and eviction after the IDF has declared their land a fire zone. On…
By Social TV March 22, 2016