A not-so-crazy speculation for the new year: A date for new elections will be set; at least one major Arab party won’t be allowed to participate in them, resulting in a call for boycott in the Palestinian public and the Jewish left. With the Arabs out of the Knesset, the right will enjoy a much bigger majority, forever. Game, set, match 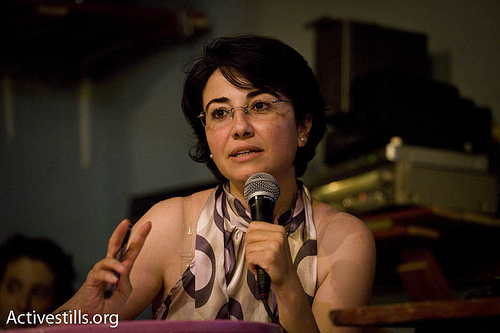 If you leave out the West Bank, Israel is still a functioning democracy. New bills are threatening freedom of speech, minorities’ rights are not defended and specific laws targeting non-Jews effectively make them second class-citizens.

But still, the core elements of a functioning democracy – most notably political representation of all citizens – are still there.

Yet even this somewhat flawed system could disappear this year.

The common wisdom in the Israeli political system is that a new date for early elections – later this year or in the first half of 2013 – will be set in the coming months. Some claim that Prime Minister Benjamin Netanyahu would like to hold general elections in Israel before November 2012, because the prospect of Barack Obama winning another term might hurt the Israeli premier in the polls. Others cite the police investigation against Avigdor Lieberman as a reason.

According to the Israeli system, the Central Elections Committee has the right to forbid parties who support terrorism, racism or oppose democracy from participating in the elections. But the committee is a political body, composed of Members of Knesset, and is currently controlled by the right. In the past, it has tried to use this article in the law for political purposes, but has failed. This time it may succeed.

It is very likely that the Central Elections Committee may ban the two major Arab parties, Balad and Raam-Taal, from participating in the elections. Given the public hostility to Balad, and especially to its MK Hanin Zoabi, letting Balad participate would be a huge surprise.

The Central Elections Committee has already disqualified Balad and Raam-Taal from participating in the last elections, when the public sphere was much more tolerant. In Balad’s case, even representatives of Labor supported the decision.

As expected, the Supreme Court overruled the Central Election Committee’s decision and allowed the two Arab parties to take part in the 2009 elections that brought Netanyahu into power (same thing happened in 2003). Balad won three seats and Raam-Taal four. One could even argue that members of the Knesset knew in advance what the Court’s ruling would be.

The public atmosphere in Israel has changed, and so has the Supreme Court, which is more conservative than it has been in the last couple of decades. If faced with a similar scenario in the next elections, I believe that is very likely that the court will not overrule a Knesset decision to disqualify Balad and perhaps even Raam-Taal.

The result would almost certainly be a call for all Palestinian citizens to boycott the elections. And to be honest, I am not sure that any Jewish progressive should participate in an election in which the ruling coalition bans opposition parties. Arab parties that would be allowed to run – if there are such – would be faced with a major problem, as would Jewish democrats – the few that are left.

Historically, the dilemma whether to boycott elections or leave the parliament in protest of anti-democratic laws has always been a major crossroad on the way to authoritarian regimes.

Low Arab turnout, and perhaps even full non-participation, would hand the right a landslide victory in the elections (the left has not won a majority in the Jewish public since 1973, and currently it is far from it, even with the Arab vote). Such events would surely benefit Avigdor Lieberman, by framing the elections around the Palestinian citizens. Lieberman’s racist proposals surrounding the issue could attract many new voters to his party.

The 19th Knesset will be much more rightwing then the current one. More importantly, Israel won’t be able to go on claiming that it respects minority rights after forcing their representatives out of the Knesset. The left will be torn apart and the Palestinian minority will be forever alienated.

And from there it will all go downhill.