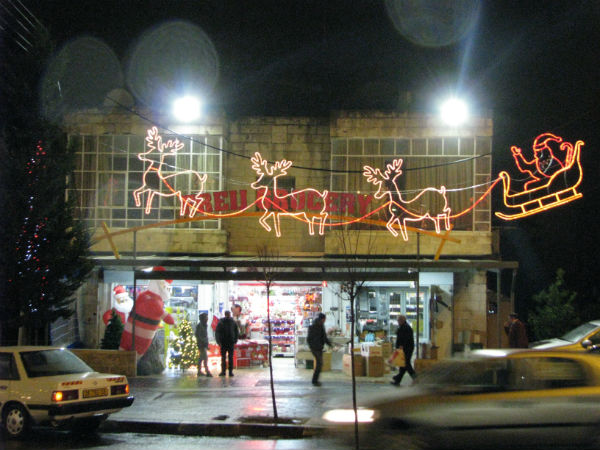 It took time to learn all that. A typical Jewish Israeli child would grow up in the 1980s not really understanding who was the guy with the red and white hat that kept bringing gifts to people in movies and TV shows. Since then, foreign pop culture has had an increasing impact on that of Jewish Israelis, massive immigration from the former Soviet Union brought greater openness, and maybe something in our resolve as defiant Jews has weakened. Look at me – I’m headed on a Christmas journey, taking ten days in December to explore this cultural phenomenon in the land over which the star of Bethlehem is said to have shone, a “yeled tov-yerushalayim” (Jerusalemite goody-two-shoes) like myself. Who would have believed?

Worry not, mom and dad, my star remains the Star of David, but Christmas is undeniably exciting, and especially in an elusive land such as ours. My plan is to fashion this trip after my “September Journey” of several months ago. Each day in September I set off to somewhere else on the map of Israel/Palestine to trace the path of that month’s political trends. The result included 24 posts, measuring over 40,000 words and hundreds of photos. Will Christmas provide this many adventures? I’ll bet on it. There are so many “Christmases” being celebrated in the holy land, from the Christmas of Filipino migrant nurses to the Christmas of the British Consul General. I’ll try and sip as many different styles of Canaanite eggnog as are available.

Now to the question of funds: A few days ago, my friends at +972 posted an appeal for readers to pitch in for the cause. +972 is a hardcore non-profit. Not only do we not get paid for our writing, but there is no real source of funding for travel expenses. Each project has to be funded through the generosity of reader. Unfortunately, the recent appeal landed this project literally zilch. So much for the holiday spirit. I’ll be heading to my first destination of the journey on my own account and my own account is slender, so I have no choice but to ring again the salvation army bell: If you, dear reader, have it in your heart to contribute to my Christmas present to you, you can do so by donating here. Thanks so much, and a merry Christmas and/or happy Hanukkah and/or happy festivity of your choice to you.

That’s all for now. It’s time to get things prepared for the “winterreise.” I’ll just leave you with a note on the photo posted above. This is my first sighting of Santa and his sleigh. He appeared to me two rainy nights ago in north Jerusalem’s Shuafat neighborhood, not two kilometers north of my Childhood home on French Hill. Santa made it this close to my childhood home and was culturally sensitive enough to not drop by. He’s a good sort and practically a neighbor. It’s time to go and meet the rest of the local Christmas crowd. Ho ho ho, off we go!