My Christmas journey begins with a death threat. On Sunday I published a piece in popular Israeli news site “Mako,” concerning the murder of demonstrator Mustafa Tamimi in Nabi Saleh. Tamimi was shot at point blank from within an armored IDF car with a tear gas canister. Readers did not take to my expression of remorse over the event, and attacked me in scores of comments sent to the site. In one of them I was offered a bullet to my skull.

What’s to do in the face of such elegant criticism? I decided to go out, seek an appropriately morbid drink, and toast my own good health and safety. To the best of my memory, a Jaffa bar named “Norma Jean” offers a Belgian beer named “Mort Subite” (“Sudden Death”). That sounded appropriate.

At Norma Jean they were all out of death, so instead I ordered a double shot of Chivas Regal, the preferred drink of assassinated Israeli Prime Minister Yitzhak Rabin. While sipping I heard the word “Christmas” spoken by the bartender. He was serving the fellow sitting to my left a glass of dark ale. It turned out to be the St. Bernardus Christmas ale, a Belgian and life-loving brew. 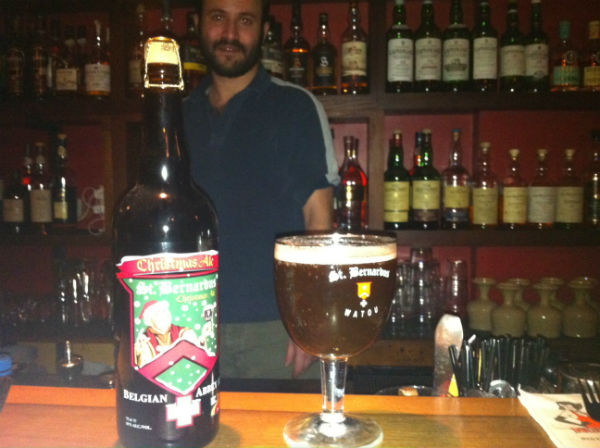 Whisky is gulped quickly, I moved on to the Christmas ale, feeling as though I was drinking Christmas itself. Isn’t this what the holiday is all about? Tidings of comfort and joy in the darkest spell of winter, a promise that the days are to begin growing longer, a sip of good Lambic when a death threat is hanging over one’s head.

Cheered up, I moved on to another bar, the “Chaser” in the Florentin neighborhood. There I met Zach Wheat, a Texan musician who converted to Judaism and moved to the holy land in the footsteps of a long gone beloved. I told him of my horror at the murder threat and my joy upon being served the Christmas ale. He found a response that befitted both stories: “The problem with Christmas in Israel,” he said, “is that there is no virgin and there are no three wise men.”

Zach recently received his Israeli citizenship. Since he didn’t get converted by an Orthodox rabbi, he is not taken for Jewish by the state, but since he refused to be registered as “Christian” under the “nationality” clause (“Israeli” nationality is not an option in the registry of Israel’s Ministry of the Interior. You’re either “Jewish” or something else) his ID states his nationality as being “Cypriot.” There’s nothing Cypriot about this guy. He’s a Texan.

The following morning I shot up to Jerusalem for a meeting at the Ministry of Tourism. On the way to the central bus station I took the photo appearing atop this post: A Santa decoration and the reflection of Tel-Aviv’s grand synagogue in the window of a Russian bookshop on Allenby St.

On the “sherut” to Jerusalem I met Craig, an intelligent young Canadian who studies refugee issues. He’s on his way to the village of Taybeh, east of Ramallah (not to be confused with the larger village of Taybeh which is inside Israel), to taste of the famous beer brewed there. I’m invited to join him once my meeting ends. I figured that since Taybeh is the northern West Bank’s only primarily Christian community, it’s more than relevant to the project, plus it offers beer. I said I’ll be glad.

Since we arrived early in Jerusalem, I decided to pop into the city’s two fanciest hotels for some pretty predictable Chrismas spirit survey. Here’s the lobby of the American Colony Hotel, situated in East Jerusalem. Some guy there is still busy putting up the mistletoe. And here’s the lobby of the King David Hotel in West Jerusalem. Christmas decorations here would appear offensive to some of the clientele, but no Hannukah decorations are to be seen either. The local guy-on-a-ladder is busy fixing the lights. I took a cab to the Ministry of Tourism, my meeting was not Christmas-related, but then, isn’t everything Christmas-related? Take the grand portrait adorning the ministry building’s lobby. It is that of former Tourism Minister Rehavam Ze’evi (nicknamed “Gandhi” for some reason I never could fathom). Prior to getting assassinated in 2001, Gandhi’s agenda was the expulsion of all Palestinians from this country – yes, also the Christians. A victim of terror or not, this man did his damnest to rid this country of Christmas altogether. I wish that I could sympathize with him, now that I’ve received death threats from political opponents, but I just can’t. 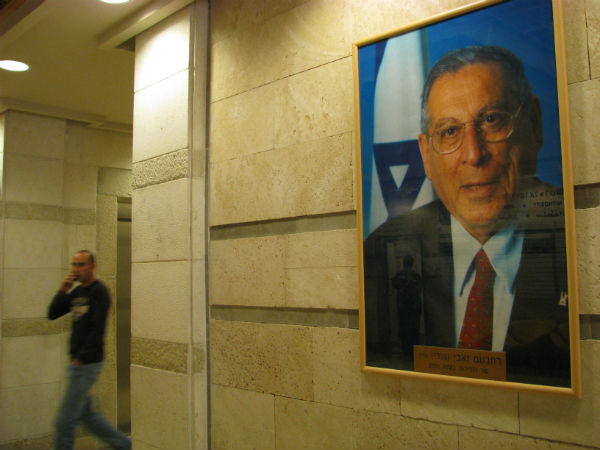 My hostess at the Ministry tells me that I’m missing out on something enormous: right as we speak, the current Minister is having a reception with heads of various Christian churches in Jerusalem in honor of the approaching holiday. As soon as our meeting ends I dart out, grab a taxi and pray to catch if only a glimpse of the Greek Orthodox Patriarch’s crown – but midday Jerusalem traffic is obscene, and once I reach the meeting’s venue – The Leonardo Hotel – not a robe is left to kiss. “It was very colorful” the insensitive security guard tells me.

Now I really need some comfort and joy. For a writer working on a “Christmas journey,” missing something like this is worse than a death threat. I hopped on a northbound Palestinian bus, with Taybeh and its beer on my mind, only to find that I have not enough cash to go into the ATM in the poor West Bank. The subsequent hour included a long walk and an awful falafel in the settlement of Neve Yaakov, a ride in an Israeli cab that would only dare take me halfway to my destination, and a boring wait in a rocky wasteland. Finally I got a Palestinian cab and headed to the day’s final destination, the beautiful desert village of Taybeh. Here there was beer to be had and new friends to chat with. Jamie, Craig’s friend, told me about his experience of Toronto’s Christmases as a Jew. They feature plenty of Chinese food and movies, since only Chinese restaurants and cinemas remain open on Christmas Eve. We chatted with Brewmaster Nadim Khoury, a legend in my world. His daughter Madees volunteers to pose for a response to my Christmas ale image of the night before. Taybeh Golden isn’t a “Christmas ale” per se, but being made by a West Bank Christian family is as Christmasy as it gets. It’s more than a Palestinian beer, too. It’s really good, and sipping it within view of a wonderful sunset I felt fully relaxed for the first time in 24 hours. I can only feel sorry for you, dear threatener. You will never have moments like these.