Nazareth Illit – Nazareth Proper – Cana in the Galilee, Christian for one day. 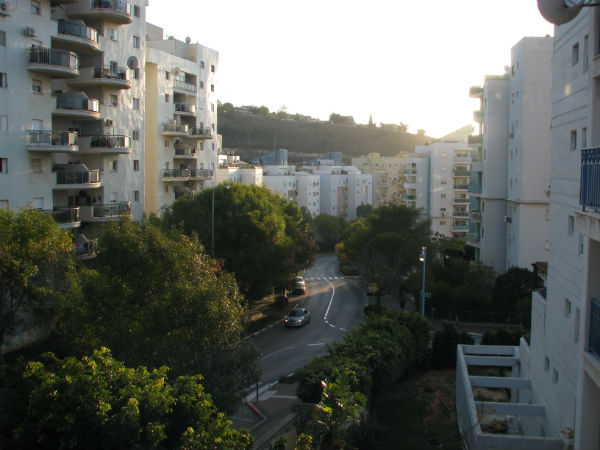 Shimon Gapso is mayor of Nazareth Illit, a city of 40,000 situated on a hilltop overlooking Nazareth proper. Nazareth Illit was designed to be a Jewish-only “answer” to the Galilee’s main Arab-speaking hub, but over the decades became increasingly mixed. Last year, Nazareth Illit’s Christian community asked to have a municipal Christmas tree erected on one of the city’s many roundabouts. Mr. Gapso objected.

Before leaving for the north on this trip, I phoned Nazareth Illit’s municipality to see whether anything has changed. A spokeswoman for city hall began by denying that anything was wrong to begin with: “The mayor was willing to put up one tree,” she said, “but they were asking for a tree to be placed on every roundabout in the town.”

I was surprised, this isn’t at all the story I heard, and I listened well at the time because I wrote about it. I asked the lady whether a tree was placed in Nazareth Illit this year and she said yes. “There’s one in the Northern neighborhood, by the Plaza Hotel.”

I asked whether the municipality paid for it. She didn’t give a straight answer. I asked for an interview with the mayor. She said he’s out of town. I asked to see her instead, for ten minutes, over one of the coming days. She said she doesn’t have time, being too busy with preparations for Hanukkah. “Not even ten minutes?” I asked. She said no.

So no one was to receive me in Nazareth Illit, but that tree sounded like a sight worth the climb. As soon as Nicola “Santa” Abdou was done with the students’ party, I bid him farewell and headed up the mountains to Nazareth Illit. Here’s what the roundabout next to the Plaza Hotel looked like. 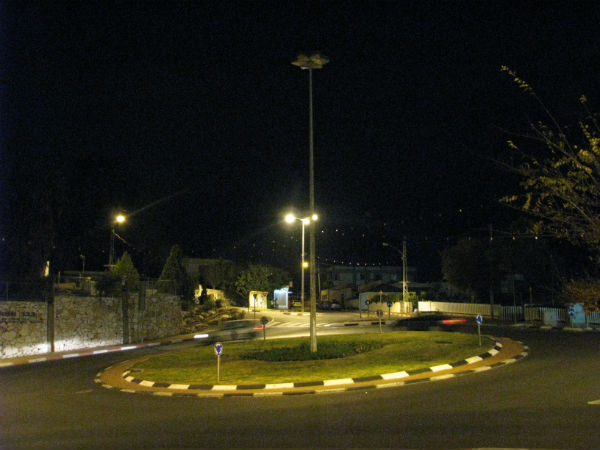 I walked into the hotel and asked its manager, a Jewish Israeli named Eitan, where the tree was. He pointed to the one placed in the lobby and insisted that this was the only tree in the area. 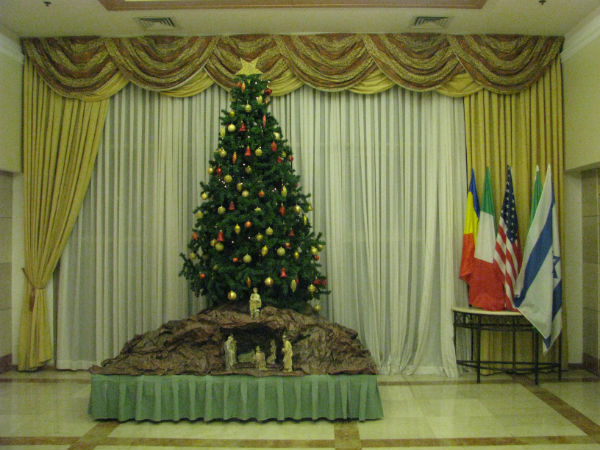 Did the spokeswoman lie to me? Could it be that she did so twice, once with the “every roundabout” story and once with the made up public tree? Making stories up is a matter of trust: She may have trusted that I wouldn’t travel to her city to see for myself. I dare speculate that hearing my native Hebrew accent, she trusted that I didn’t really care. As a Jewish Israeli, I was so likely to suspend disbelief and simply accept her version, that she went for it.

I was thinking about this the following morning, while winding through the stone streets of non-elite Nazareth. A pilgrim or even a tourist in this city must suspend disbelief nearly twice every two minutes. How else to accept that the annunciation happened in two potential sites on which two different churches were erected? How else to accept that notes tucked in the wall of a church will bring good fortune, despite slender evidence? 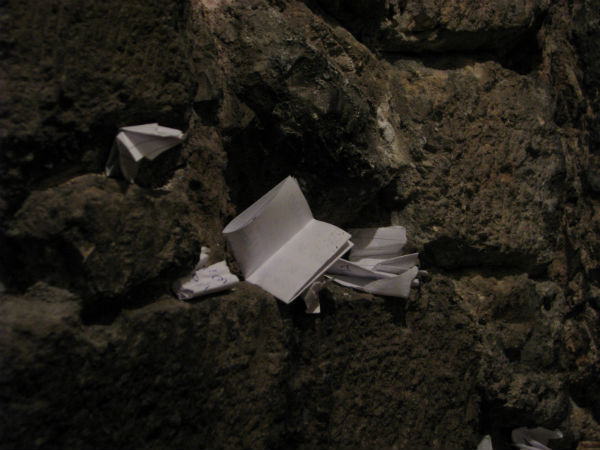 How else to accept that the paintings are ancient, despite seeing the young woman paint over them in real time? 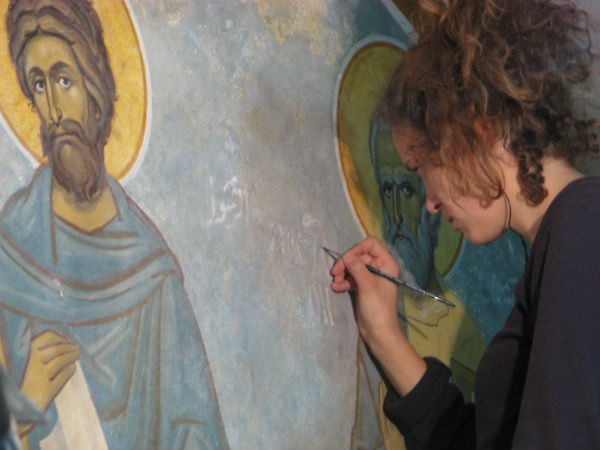 How else to accept that God had a white son, even though the Chinese make up the largest ethnic group in humanity? etc, etc… 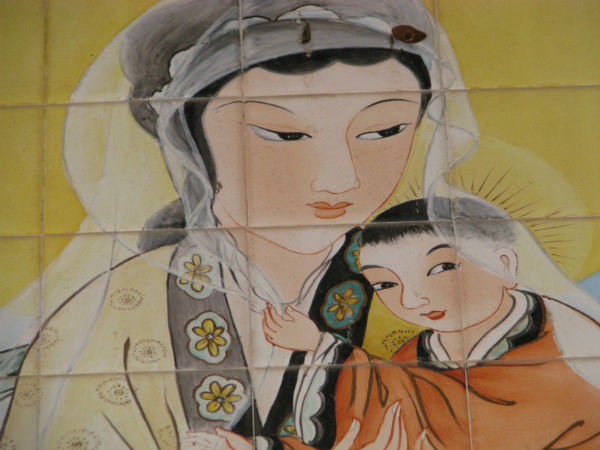 On this new day I decided to suspend my own disbelief. Reader Aristeides was amazed that that the Christmas I’m finding over here so far is “quite devoid of Christianity.” If I overcame my disbelief in the virgin birth and ressurection, I would doubtlessly find much more in and around Nazareth. I decided to become Christian for one day, and celebrated my rebirth by heading out on the Jesus trail. 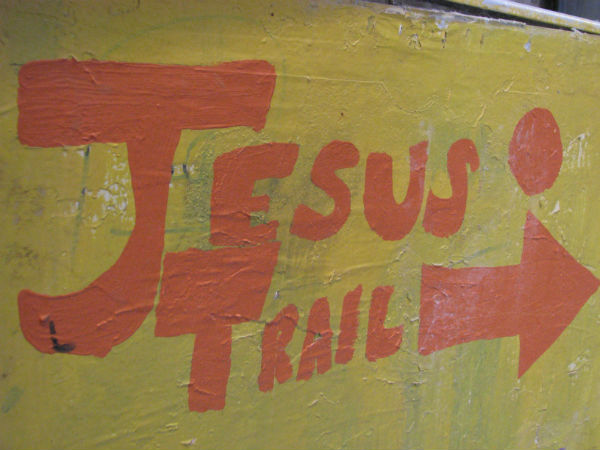 Maoz Yinon, the young, Jewish-Israeli founder of Nazareth’s now legendary Fauzi Azar Inn, marked the Jesus trail a number of years ago. It charts a route from Nazareth, where Christ spent his youth, to Capernahum, where he lived and taught as a grown man. Last month the Ministry of Tourism launched its “Gospel Trail,” a takeoff on Yinon’s achievement. As a Christian man, I can’t possibly pick the government’s trail. Yinon is the meek who deserved to inherit the earth. The Ministry of Tourism is a rich man trying to walk through the eye of the needle into heaven.

Once the trail emerged from Nazareth’s truly filthy suburbs, I found myself faced with the expanses of the Galilee. They were filthy in a different way: full of factories, gas stations, industrial greenhouses… Nonetheless, I felt uplifted. The notion of this land being holy had moved me now in a way that it never did my Jewish Israeli spirit. I supposed I would have experienced similar thrill as a visiting diaspora Jew. 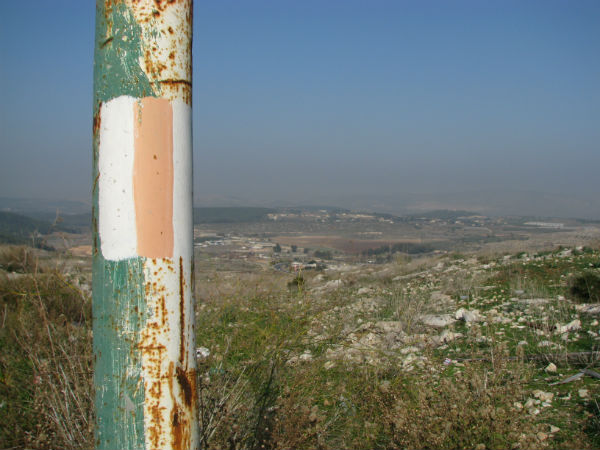 Three hours later I faced the destination of my pilgrimage and one of the Jesus trail’s first stations: Cana in the Galilee. 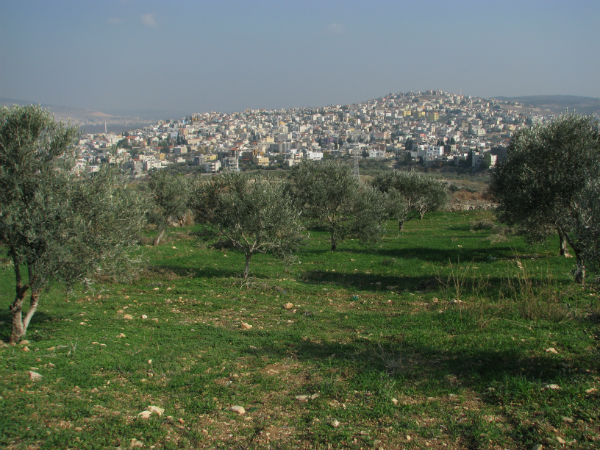 It is here that Christ performed his first miracle: that of the water and the wine (Ah, the liberty of not having to add: “according to tradition”!) Considering this, it was quite surprising to find Cana entirely bereft of typical Christmas symbols. The path of churches running through the heart of town was undecorated, souvenir shops sported no seasonal offerings and the window of the toy store on the main street was oddly decorated for Easter. 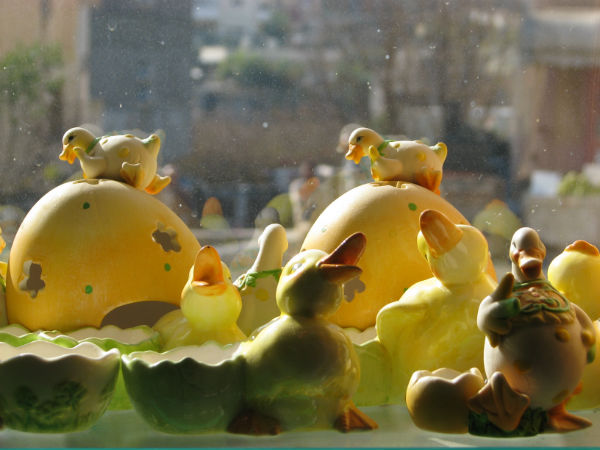 It appears that Aristeides was right. At the moment I became mentally baptised and assumed pure faith, commercial Christmas vanished from my view. It was only inside the Wedding Church, located directly where the miracle was performed, that I saw one sign of the holiday: a large-scale nativity set.

I approached one of the nuns and asked her of her view of Christmas. Sweet Sister Marie came here from the Philippines. She began by explaining that Christmas should reflect the poverty of Christ and not be celebrated materially.

“Santa Claus does not exist,” Sister Marie decreed. “Its the work of the Masons. There was a man we know as St Nicolas. He wanted to help two young ladies, whose father wanted to sell as prostitutes. St. Nicolas walked to the town and gave the father money. The Masons abused this memory and turned his figure into that of Santa Claus.”

Unwilling to suspend disbelief, Sister Marie told me how she uncovered the lie. “In the Philippines we hang stockings by the window on Christmas. My mother told us not to hang many stockings, because Santa is poor. Then my sister woke up at midnight and saw my parents putting chocolate and gifts into the stockings.”

The initial shock led to disillusionment. “When I was a child I wanted to see Santa Claus, I wanted the gifts. I loved caroling. When I was ‘in the world’ I loved Christmas the most, but now I understand: Christmas is a time for us to meditate on Christ’s way in this world. He was so poor. Just imagine him, born in the manger. He didn’t go to the palaces and there were many palaces to go to. He gave us an example. He chose to remain poor in order to teach us.” 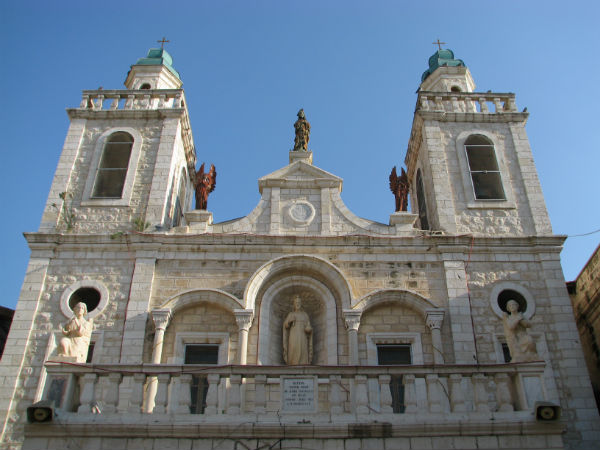 Still, I had to go up to the mall in Nazareth Elite and get myself some new socks. Having re-entered this shockingly modern city on the hill, which looks nothing like anything around it, I took a bus and found it full of Russian speakers. At the mall, the red and white Christmas ornament decorations spoke for themselves. 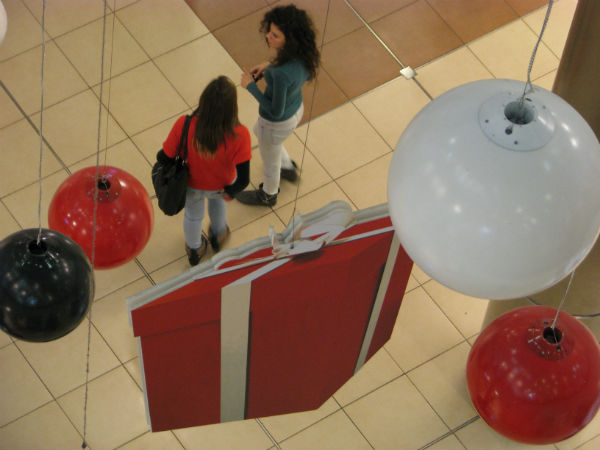 The clientele was made up nearly exclusively of Israeli-Palestinians and immigrants from the former Soviet Union, two groups that are open to the (typical) concept of Christmas. Mayor Gapso has to suspend his own disbelief. He does not accept that his town no longer embodies the Zionist ideal its founders had in mind, that it is truly diverse and wonderful for that very reason. Someone should wake him up in the middle of the night and show him who really puts the chocolates in the stockings.