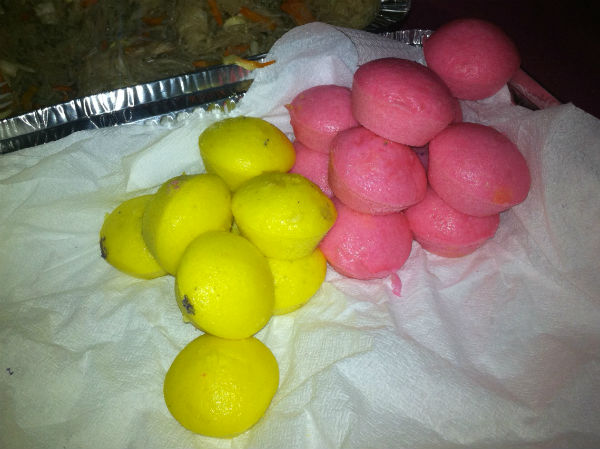 At sundown on Friday I arrived at my favorite place in the entire country: The tiny community of Harashim. It was founded in the 70s as part of Ariel Sharon’s plan to Judaize the Galilee. Scores of small towns known as “lookouts” (“Mitzpim”) were established on mountaintops. Since Palestinian communities developed around springs in lower altitudes, the lookouts overlook them as Kafka’s castle overlooks the town below it, and could easily be used for military purposes if neccesary.

The people who came to live in such places, however, were precisely the kind of people prone to make friends with the Palestinian villagers. Those were nature lovers, new-age-y types, and peaceful souls of many creeds. Harashim’s population is mainstream as compared to that of other lookouts, but its layout is unique and betrays a deep respect for man and nature. The village is hidden. Its original modest stone houses don’t peek over the natural brush, so that to someone walking along main street they are literally invisible. 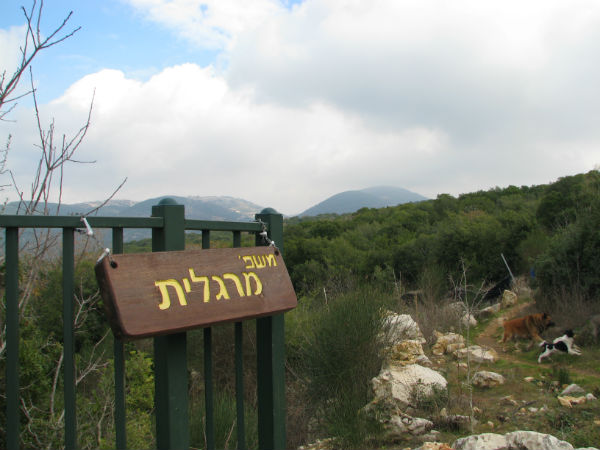 Suspended hundreds of meters above the Beit Hakerem valley, Harashim’s unpaved clifftop walk offers an astonishing view that extends from the sea of Galilee to Haifa’s bay. It is the rainiest spot in Israel, and thus the greenest. I would never have known of this place if not for an extraordinary young woman named Tal, who got word of my music and invited me a few months ago to perform at the local pub.

Tal’s family should have a special Christmas connection. Her father, Ariel, was raised near Bern in Switzerland. He met an Israeli girl named Anat on the island of Crete, converted to Judaism and married her. Over a first cup of Harashim coffee I asked him whether he longed for the White Christmasses of his childhood. Arial said yes, but didn’t seem too sentimental. He’s here now, Jewish and content.

Later in the night the family’s cozy, wood-heated living room was visited by Yaniv, who does celebrate Christmas. His mother, Maria, is a non-Jewish Argentianian, and since Jewish identity is inherited from the mother, Yaniv too is considered a gentile. 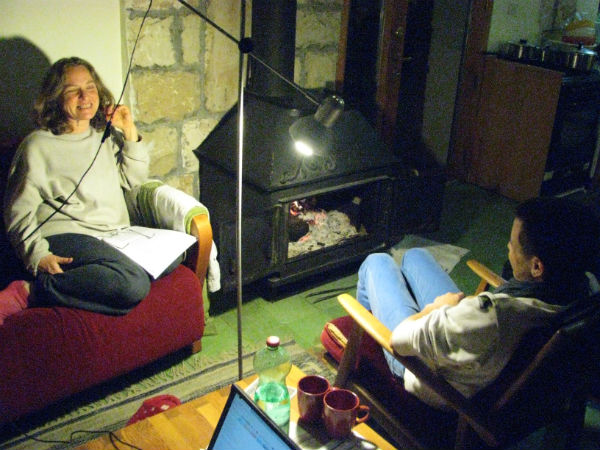 Yaniv isn’t the only caroller in Harashim’s choir. Another neighbor, Seija, has already left to her native Finland to celebrate the holiday with her family. One of Tal’s sisters is helping her grandparents put up Christmas lights in the valley of Emmental. Another, Daphna, already has them up in her room. There was talk about asking a member of the community to pose as Santa for a certain party, and a friend from Tel Aviv just arrived on a Christmas journey and filmed himself singing “Santa is Bankrupt” in front of the fireplace. This community, supposedly strictly Jewish Israeli, is hardly untouched by Christmas. 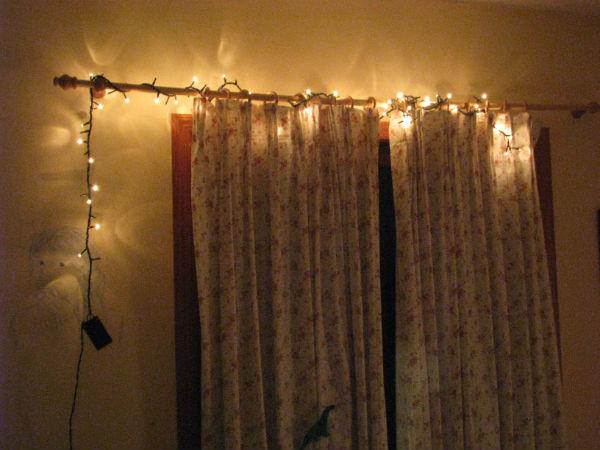 I looked at Daphna’s lights, wondering whether Bing Crosby referred to Harashim when he sang: “Christmas eve will find me / where the lovelight gleams.” He promised to be home for Christmas, if only in his dream, but home is such an elusive concept, almost as elusive as Christmas. I felt at home in Harashim, about as far from my home as Israel allows, I felt Yuletide in this house where Yuletide isn’t celebrated.

Daphna’s lights are rather easy to find. “Judaizing” the Galilee meant bringing Jewish Israeli families away from the coast to live among the Christians, Muslims and Druze. Though endowed with a pub, Harashim hasn’t so much as a shop where one can buy a carton of milk. The nearest shops are in Peki’in, where chocolate Santas are also on sale.

We made some use of this fine neighborhood, driving down to the pub at the Christian town of Tarshikha on Friday night. On Sunday we strolled through the green brush, met friends and ate plenty. Then on Saturday night the promise of a very special Christmas party justified leaving all this wonderfulness behind and heading traveling south into the most rugged area of Tel-Aviv, the area surrounding the central bus terminal. 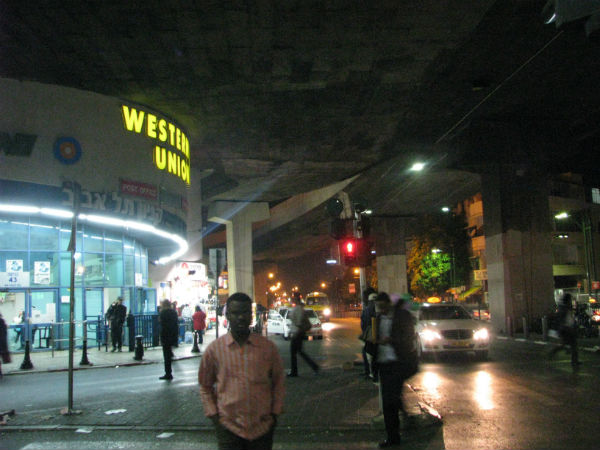 I reunited with Ruthie and both of us headed into the monsterous terminal building itself. There, inside a small bar, we met our friend Yonatan. All around him were platters full of noodles and sushi, bottles of soft drinks and balloons. Yonatan was wearing a Santa hat and every one else in the room was dressed in red. They were all Filipinos, well, mostly Filipinas. 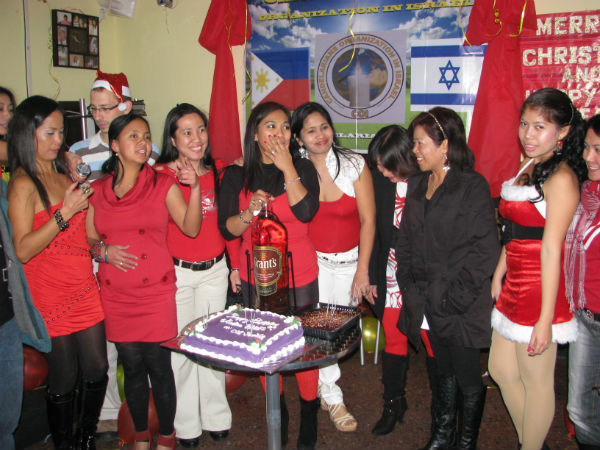 People from the Philippines arrive in Israel mostly as nurses, to care for the elderly and the handicapped. They are a community of some size and over the years many of them have put down roots here. Yonatan is an activist for the organization “Israeli Children,” which fights to prevent the deportation of children born in Israel to migrant worker parents, and to assure their well being.

He’s well-versed in the ways of Filipino Christmas parties. “First everyone waits for an hour and a half,” he said, “Everything always begins an hour and a half late. Then they share greetings, good wishes and prayers. Then they eat. Then they celebrate the birthday of anyone whose birthday is approaching, and then the party begins, with performances and there’s a raffle with a laptop as first prize.”

Yonatan added that we can move on whenever we wish. “There are other parties on tonight. People can hop from one bash to the next, like at the Mimouna.” Mimouna is the feast North African Jews observe in honor of Maimonides following passover.

Before hopping on, we watched kids perform a dance to Justin Bieber’s “Baby,” had our photos taken with the revelers countless times and tasted sweet, fluorescent colored Puto pastries, seen at the opening of this post.

Over the puto tray I had the honor of meeting my first Filipino priest. Father Rick Fernando has been with this community since 2006. He’s not the type to weep to “I’ll be home for Christmas.” Belonging to a nation whose sons and daughters travel the entire earth, he’s come to define home differently: “We bring Christmas with us.” He told me, “We bring our culture with us, and since we have no families here, we form families.”

I told him of of his compatriot, Sister Marie from Cana, and of her displeasure with the wrapped gifts and white pom poms that abounded around us. “These secular symbols are signs of the coming of Christ,” Father Fernando said, “It’s all that they are. There is nothing unholy about them. The Franciscans want to live simply and that’s beautiful, but these women here are not nuns. They are in the world, and both the convent and the world were created by God.” 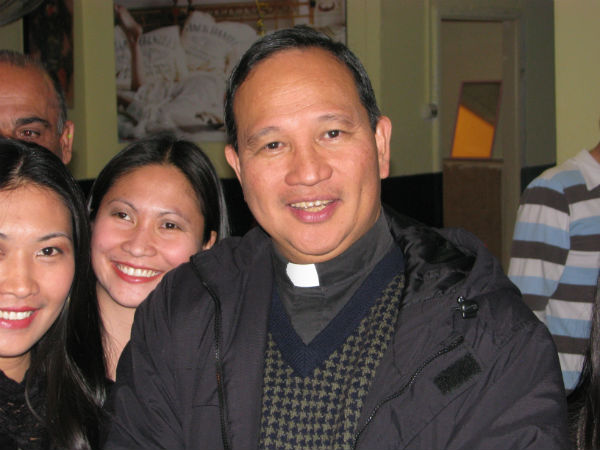 The next party, held at a community center in South Tel-Aviv’s Hatikva neighborhood, was utterly huge and soon erupted into some fine dancing. 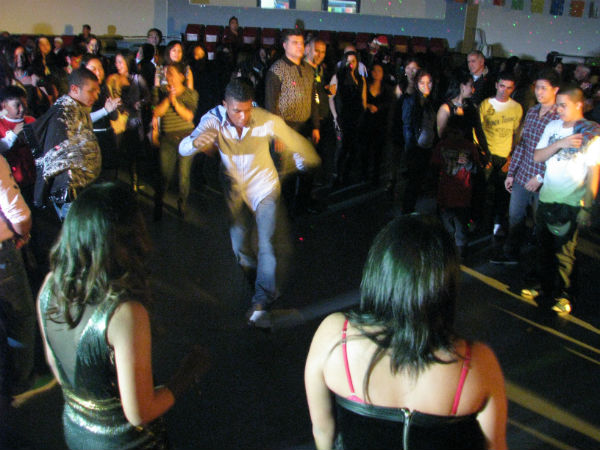 Yonatan explained that each party was thrown by natives of different regions in the Philippines. With us here were the people of Pangasinan, on the island of Luzon. Following the dancing, they held a beauty pageant and kids got up on stage to sing. Yonatan and his colleague Noa, who made a cameo appearance in the September journey, knew the kids well and cheered them on. 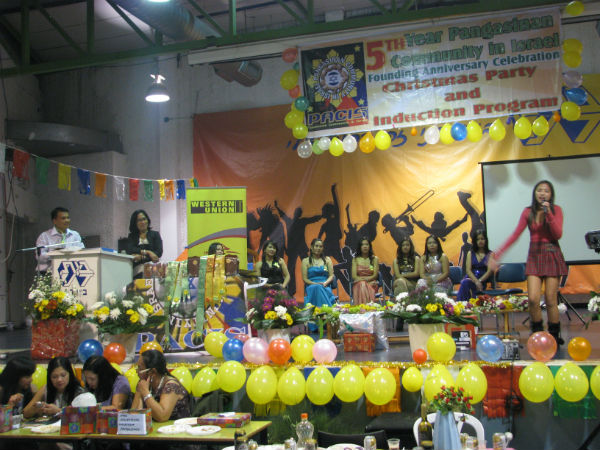 I expressed an interest in speaking to one of the children and Yonatan urged me to avoid doing so. The xenophobic establishment is so eager to deport the kids, that a Christmassy statement could cause much harm. As a safe alternative, I stopped 9-year-old Brigit in the community center’s corridor and asked her about some other wintery holiday.

“Sufganiot!” she said, the Hebrew name of the holiday’s traditional jelly-filled donuts.

“Which candle of the menorah do you like best?” 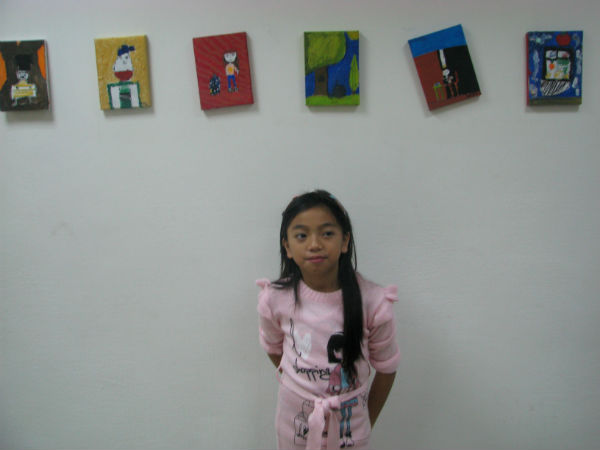 Brigit is a smart and wonderful kid and I’m glad to have her share this country with me. The same goes for Ariel, Maria and Seija from Harashim, for Father Fernando and for the African man in the fifth photo from the top. Small country though this is, there’s room here for everyone and for everyone’s traditions, whether or not they mix and mingle with our own. An ethnically exclusive lookout can only last as such for a brief while. Eventually, inevitably, Christmas lights are lit and puto pastries are served, right next to the sufganiot.