What’s wrong with the “military service shirkers” bill? Well, just about everything

The Ministerial Legislation Committee is scheduled to debate tomorrow (Sunday) a bill by MK Moshe Matalon (Yisrael Beitenu), which prohibits government support of artists who are “military service shirkers” (Mishtamtim, in Hebrew). In explaining why the bill is essential (Hebrew document), Matalon says: “The spread of the phenomenon of evading one’s duty of serving in the IDF is critically supported by celebrities, particularly of the arts and sports fields, who undoubtedly serve as a role model for the youth, and who are unwilling to let a contribution to the State harm their own career advancement. This sends a severe message to the youth, according to which the worship of the celebrities and the love they receive do not necessarily derive from a contribution to the existence of the State and society and sharing the [common – YZG] burden.”

One does wonder what Matalon thinks of the example set by his fellow USSR Beitenu MKs, the famous patriots Faina Kirshebaum and Anastasia Michaeli: Look, kids, you can make it to the Knesset, and as bloviating ultra-nationalists, without serving even a single minute in the IDF! Perhaps MK Matalon should clean his own house first?

Snarkiness and the usual hypocrisy of Yisrael Beitenu aside, Matalon’s bill contains several reasons for concern. For starters, there is no such thing as “shirker.” The IDF is responsible for discharging anyone who doesn’t serve; none can do so without the IDF’s approval. There are people who avoid the service, even though they are lawfully bound to this indentured servitude, and they are generally called defectors. For its own reasons, the IDF has repeatedly tried to confuse the terms “shirker” and “defector,” trying to make Israelis think defectors are shirkers. Now, if the IDF suspects that someone has cheated it, and avoided indentured servitude – to which yours truly has finally bid goodbye this week – through cheating, then it has to gather the evidence (it is a criminal offense), and drag that person to court. Somehow, this very rarely happens. There is no “evading phenomenon:” there is only whining by the IDF.

The IDF plays fast and loose with the data. It repeatedly hints that most of the people discharged for mental reasons are faking it, and that most of them are secular people. But when it was forced to expose the data, it turned out (Hebrew) 45% of the people getting a mental health based discharged are ultra-Orthodox – who are free of military duty anyway. Why are the haredim, who are already discharged, asking for a mental health discharge? Because with a mental health discharge, they are no longer bound to their yeshivas and can legally go to work. Why does the IDF play this game? Hopefully, we’ll find out some day. 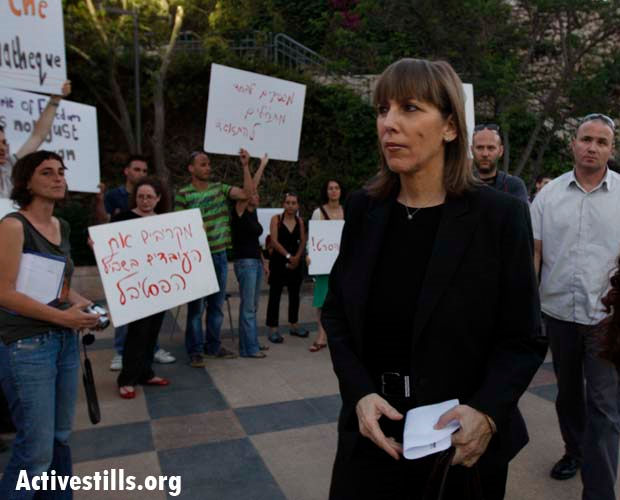 You know your bill is over-patriotic when it troubles Limor Livnat (Credit: Activestills)

Perhaps the strangest bit in the bill, and the most Soviet, is the authority granted to the Minister of Culture and Sports to allow an artist to perform even though he did not serve in the IDF. That is, Matalon and the rest of the MKs who signed the bill want to turn the Minister into a current and Israeli version of Andrei Zhdanov: at his whim, the artist may either work or starve.

Even Limor Livnat, the current minister – not a blushing violet she: her artistic career began in disturbing theater shows which were not patriotic enough for her taste, and she later upgraded her act into physical assault of a protester; some would say her main contribution to Israeli culture was giving inspiration to the young punk band, “Punch Limor Livnat in the face,” even she does not want to become the second coming of Zhdanov, and she announced (Hebrew) she would oppose the bill.

Such bills rarely become laws. The problem with them is the atmosphere of false resentment they create: Look at those bastards in the Knesset/the High Court of Justice, they’re defending the shirkers. They’re all non-patriots, they’re all traitors. That’s how you pull the ground out from under sane politics, a politics of citizenship and human rights, and replace it with a politics of blood and land, of unthinking grudge. It seems that, for members of Yisrael Beitenu, that is precisely the point.

email
Before you go…
A lot of work goes into creating articles like the one you just read. +972 Magazine is nonprofit journalism, owned by many of our writers, editors, and journalists. In order to safeguard that independent voice, we are proud to count you, our readers, as our most important supporters. With your support, we can keep +972 Magazine a strong, independent, and sustainable force helping push the global discourse on Israel/Palestine.
DONATE
More About knesset