Fourteen-year-old Yusef a-Shawamreh, who the IDF killed one week ago in the southern West Bank, was not vandalizing the separation barrier when he was killed, but was crossing it to pick plants on his family’s agricultural land, B’Tselem reported Wednesday following its own investigation.

According to the report, a-Shawamreh was shot when he and two friends, Zahi a-Shawamreh, 13, and al-Muntaser Beallah a-Dardun, 18, were going through a wide gap in the fence that has existed for at least two years; it is safe to say the IDF has known about the gap in the fence. The two surviving youths told B’Tselem field researcher Musa Abu Hashhash that they heard three or four shots as they got off the road, fired with no advance warning.

This contradicts the IDF’s version of the story, which claims that soldiers saw the youths vandalizing the fence, began procedures to arrest a suspect — which means shouting warnings and then firing in the air – and then shot a-Shawamreh after he and his friends allegedly did not heed the warnings. B’Tselem also reported that although the soldiers provided first aid to a-Shawamreh, a military ambulance took 30 minutes to reach the site of the shooting, despite the fact that there is a military base only two kilometers away. What’s worse, the soldiers were apparently on a proactive ambush mission in broad daylight and should have been aware that Palestinians regularly cross that part of the fence to pick gundelia, a thistle-like edible plant annually harvested at this time of year. 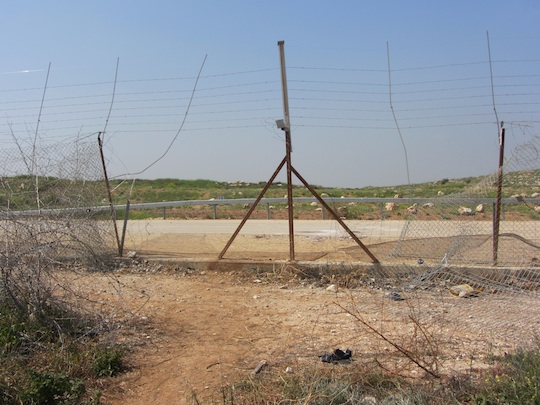 The gap in the barrier through which the three crossed. (Photo by Itamar Barak/B’Tselem)

This section of the barrier is located well within the West Bank, some 200 meters east of the Green Line, not far from the a-Shawamreh’s home in the south Hebron Hills village of Deir al-‘Asal al-Foqa. The a-Shawamrehs own farmland that is now located on the other side the barrier, and that land is where the three youths were heading to gather plants.

In a statement, B’Tselem said: “By justifying the use of lethal fire in broad daylight at youths who posed no danger to any other persons, the above [IDF] statement conveys a cynical lack of concern for the life of a Palestinian teenager.” The Military Police Criminal Investigations Department (MPCID) has launched an investigation into the incident.

Eleven were killed in Gaza, about half of them civilians who posed no threat whatsoever, except that they were close to the border fence; others were targeted by Israeli airstrikes in response to fire into Israel. The eight killed in the West Bank include the Jordanian-Palestinian judge shot and killed at the Allenby Crossing, the circumstances of which remain obscure and conflicting. (It certainly doesn’t help that the security cameras were peculiarly not working that day.)

While the circumstances of each killing vary to a degree, the numbers are startling. They tell the story of a military framework all too capable of taking  lives all too often.

Correction:
The sixth paragraph of this article has been corrected to reflect that on average, one Palestinian was killed every 4.26 days in the first 81 days of the year, and not, as it mistakenly stated due to a typo, 4.26 Palestinians each day.

Related:
IDF kills Palestinian suspected of vandalism
2013 was a deadly year in Israel-Palestine