Demolitions and arrests in the West Bank, solidarity with Rachel Corrie’s family, preparing for war, and more. Activestills images tell the stories of the week. 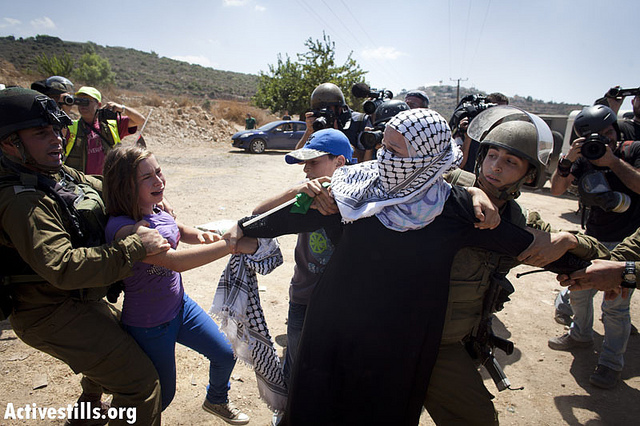 Israel soldiers arrest Nariman Tamimi, an activist from Nabi Saleh, while children from the village try to free her at the entrance to Nabi Saleh’s water spring during the violent dispersal of the weekly protest against the occupation held in the village on August 24, 2012. (photo: Oren Ziv/Activestills.org) 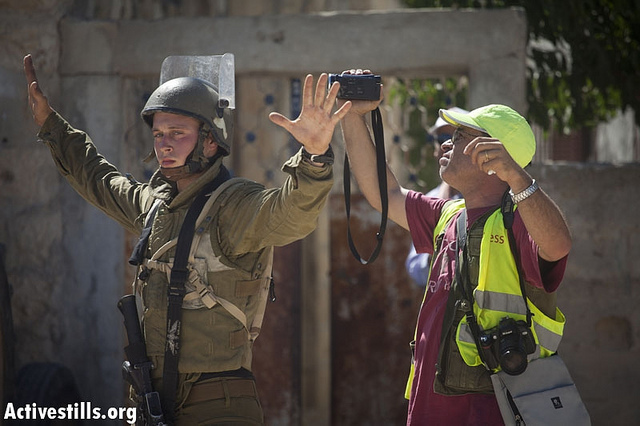 An Israeli soldier prevents a Palestinian cameraman from documenting the house-to-house searches conducted by the Israeli army in the center of Nabi Saleh village during the weekly protest against the occupation and settlements, August 24, 2012. (photo: Oren Ziv/Activestills.org) 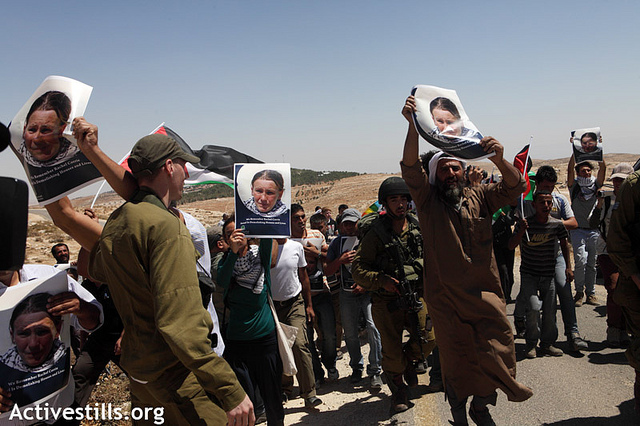 Palestinians from Um Fagarah village, together with international and other Palestinian activists, demonstrate to demand justice for Rachel Corrie and protest house demolitions, in front of Avigai outpost, South Hebron Hills, August 28, 2012. The demonstration took place the same day Rachel Corrie’s parents were preparing for a judge’s ruling in their high-profile civil lawsuit against the military, in which the judge ruled her death an “accident.” Um Fagarah is one of the 12 Palestinian traditional villages located in “Firing zone 918” slated for demolition. (photo: Anne Paq/Activestills.org) 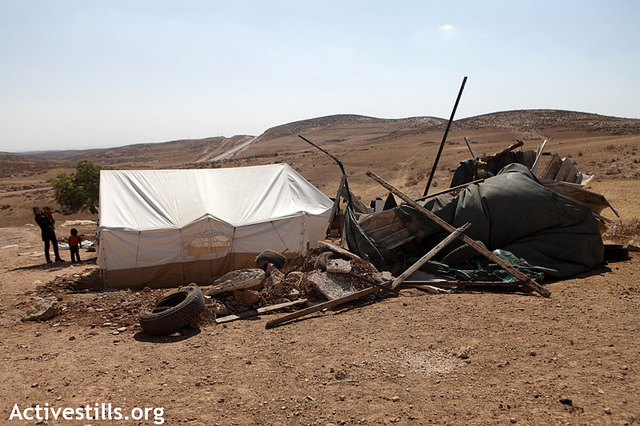 A tent provided by the Red Crescent next to what remains of a residential structure which was demolished earlier by the Israeli army during a wave of demolition in Khirbet Zanuta, South Hebron hills, August 28, 2012. The demolition in the village of Khirbet Zanuta devastated the small community of seven families. In total, two wells, four animal shelters, and a concrete structure to store wheat were destroyed, affecting 25 people including 17 children. (photo: Anne Paq/Activestills.org) 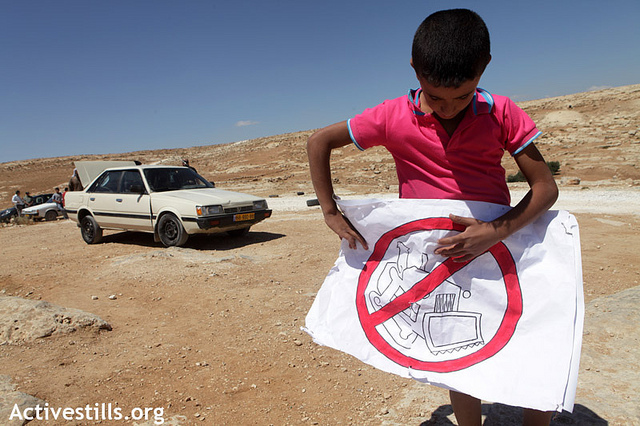 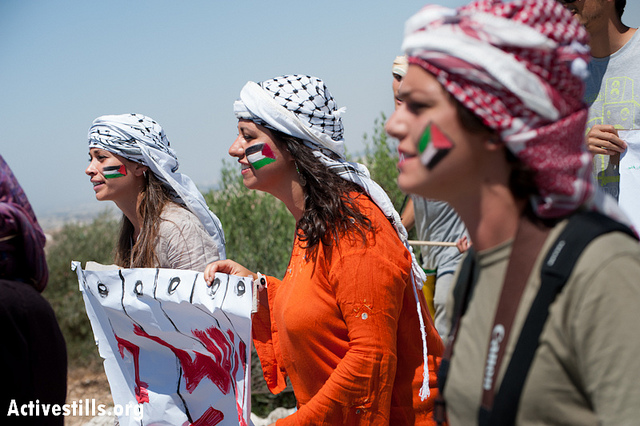 Italian solidarity activists join Palestinians in the weekly nonviolent demonstration against the separation wall in the West Bank village of Al Ma’asara, August 24, 2012. If completed as planned, the separation wall that is being built around the village will cut it off from its agricultural lands. (photo: RRB/Activestills.org) 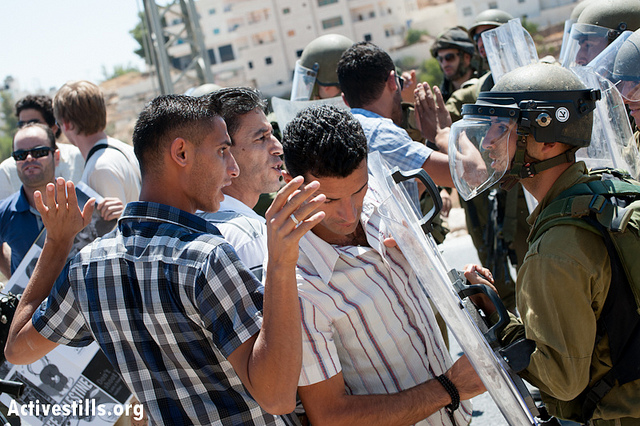 Palestinians confront Israeli soldiers in the weekly nonviolent demonstration against the separation wall in the West Bank village of Al Ma’asara, August 24, 2012. If completed as planned, the separation wall that is being built around the village will cut it off from its agricultural lands. (photo: RRB/Activestills.org) 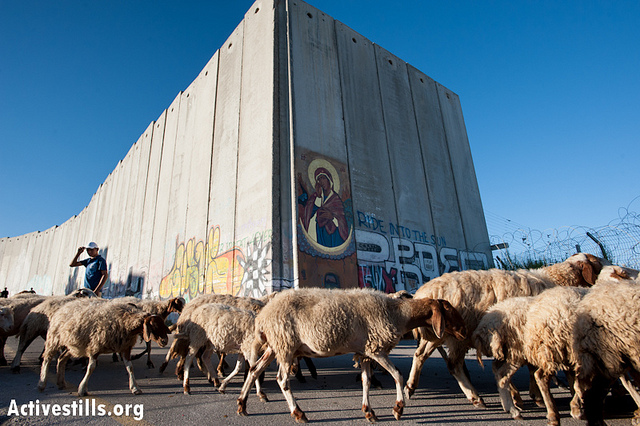 A Palestinian shepherd tends his flocks near the Israeli separation wall close to the Bethlehem checkpoint, August 25, 2012. The Israeli barrier and settlements have rendered 85% of Bethlehem Governorate’s agricultural lands off-limits to Palestinian use. (photo: RRB/Activestills.org) 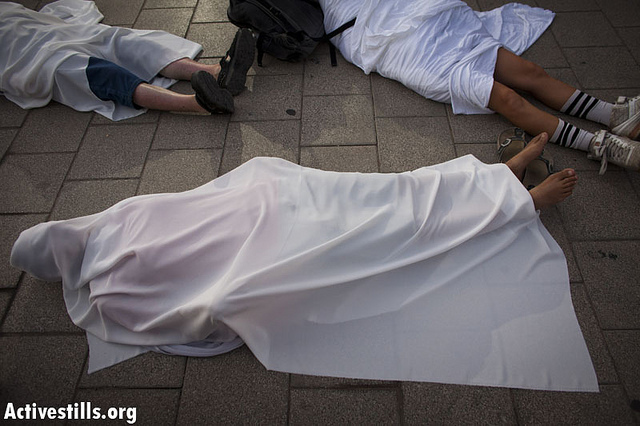 Activists stage a “die-in” in front of the offices of the Ministry of Defense in central Tel Aviv, during a protest held against an Israeli attack on Iran’s nuclear installations, August 23, 2012. (photo: Oren Ziv/Activestills.org) 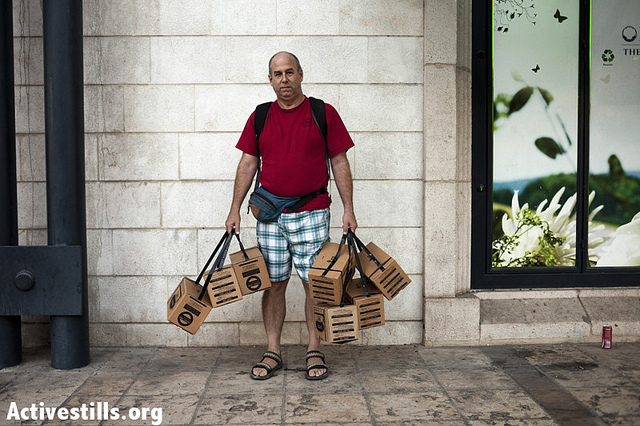 Richard, 54, seen after collecting gas masks for his family at a distribution station in a shopping mall in West Jerusalem on August 28, 2012. “I see it as a pacifier, like what we give to kids to shut up when they cry. In case something happens, I don’t think a gas mask will help much,” he explained as he left the shopping mall. “And besides, it’s an expensive pacifier too.” (photo: JC/Activestills.org) 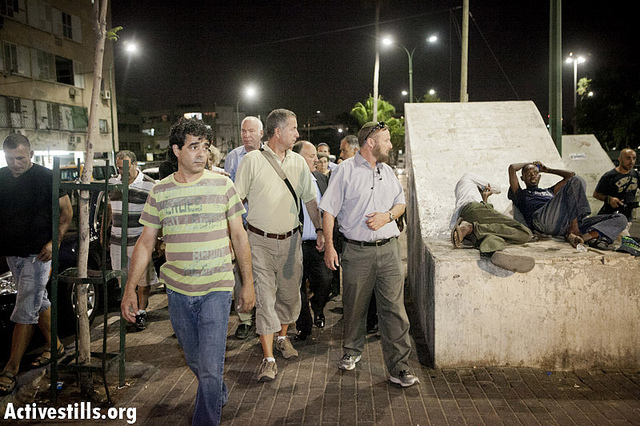 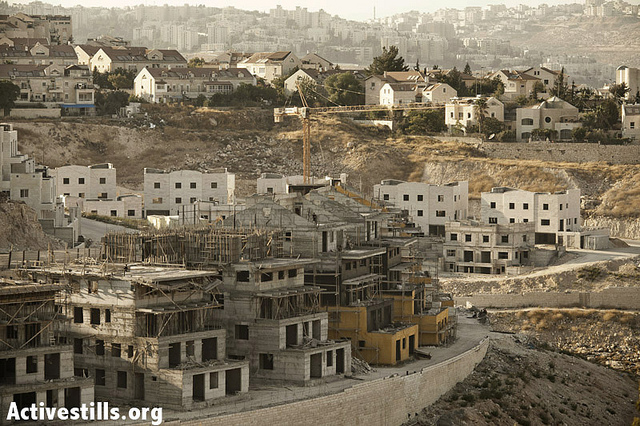 Ongoing construction work in the Pisgat Ze’ev settlement in East Jerusalem, as seen from the Anata neighborhood on August 29, 2012. Under international law, all Israeli settlements established after 1967 in occupied Palestinian territory are illegal. Residents of Anata complain of having lost land and access to the hill on which this part of Pisgat Ze’ev is built, although they add that several local families have actually moved to the settlement in order to find themselves on the other side of the separation wall, and to avoid having to go through a checkpoint several times a day. (photo: JC/Activestills.org)

emailemailemail
Before you go…
A lot of work goes into creating articles like the one you just read. +972 Magazine is nonprofit journalism, owned by many of our writers, editors, and journalists. In order to safeguard that independent voice, we are proud to count you, our readers, as our most important supporters. With your support, we can keep +972 Magazine a strong, independent, and sustainable force helping push the global discourse on Israel/Palestine.
DONATE
More About Palestinian solidarity 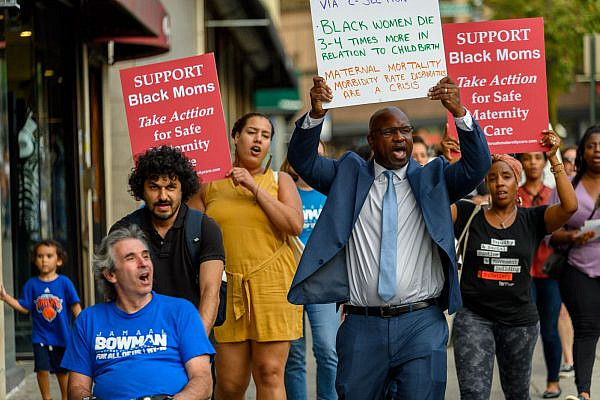