A prisoner’s release, a fight for academic freedom, a demolition threat, and more. Activestills images tell the stories of the week. 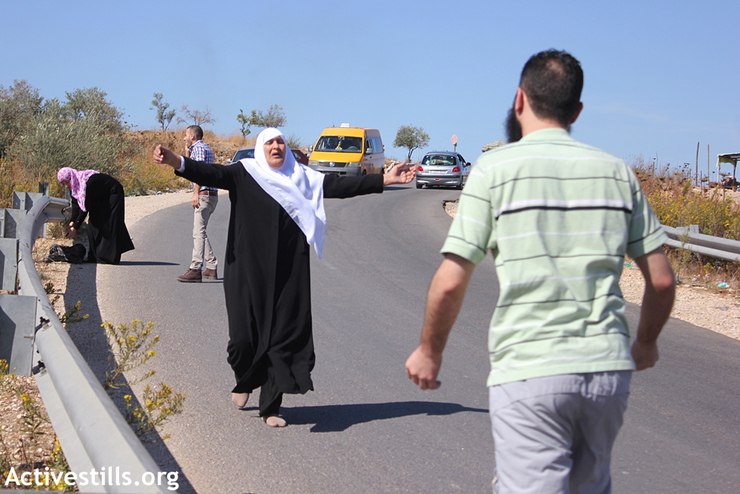 The mother of Hassan Safadi runs to greet her son as he arrives at the Jubara checkpoint near the West Bank city of Tulkarm after his release from Israeli military prison, October 29,2012. Hassan reportedly went on an on-and-off hunger strike for 168 days in Israeli military prison, in protest of Israel’s ‘administrative detention’ policy, under which Palestinians can be detained for prolonged periods of months or years without any charges brought against them. (photo by: Ahmad Al-Bazz/Activestills.org) 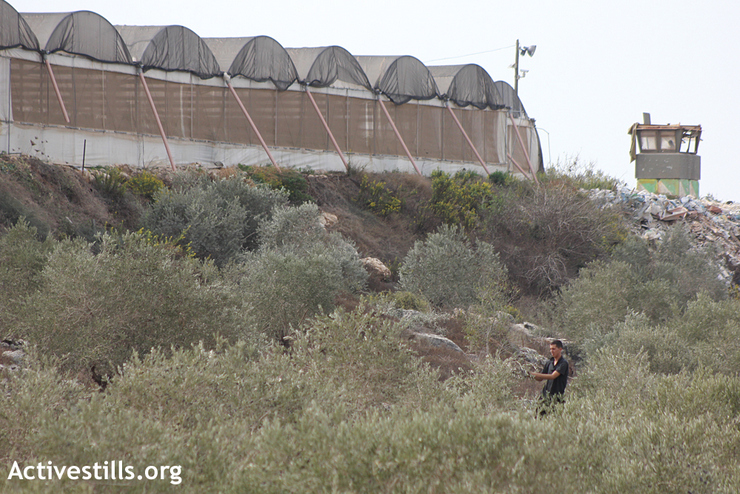 A Palestinian farmer picks olives under Israeli greenhouses from the illegal settlement of Kedumim, during the olive harvest season in the West Bank village of Kfar Qadum, near Qalqiliya, October 24, 2012. (photo by: Ahmad Al-Bazz/Activestills.org) 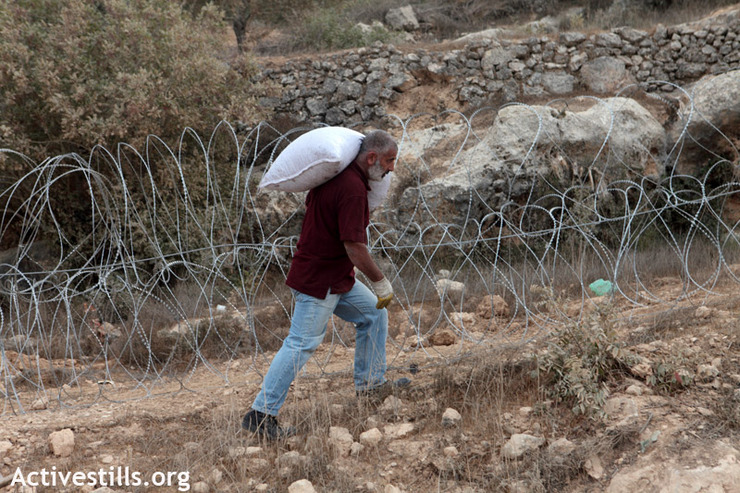 Members of the Atrash family carry olives after they harvested on lands located on the other side of the route of the Israeli separation wall, in the West Bank village of Al Walaja, October 27, 2012. The family owns more than four dunams in the valley of Al Walaja. Since the Israeli authorities closed off some access roads, the family can only get to their land by walking through the mountains and going through a gap in the wall. However, once the wall is completed it will surround Al Walaja and in all probability, cut off access to their land. (photo by: Anne Paq/Activestills.org) 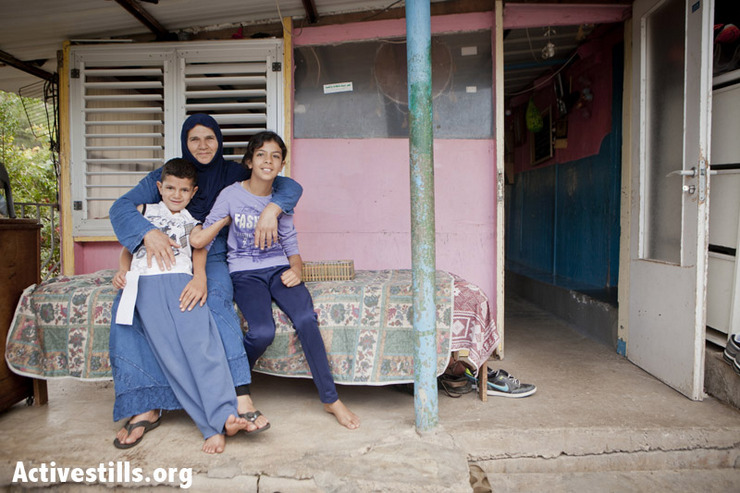 The Khawalid Bedouin family posing outside their home, currently under threat of demolition, October 27, 2012. The four Khawalid family homes are built on the same property, and are all slated for demolition. The Israeli administration has issued the demolition order, announcing that the lands are bordering an area planed to be a national park. (photo by: SG/Activestills.org) 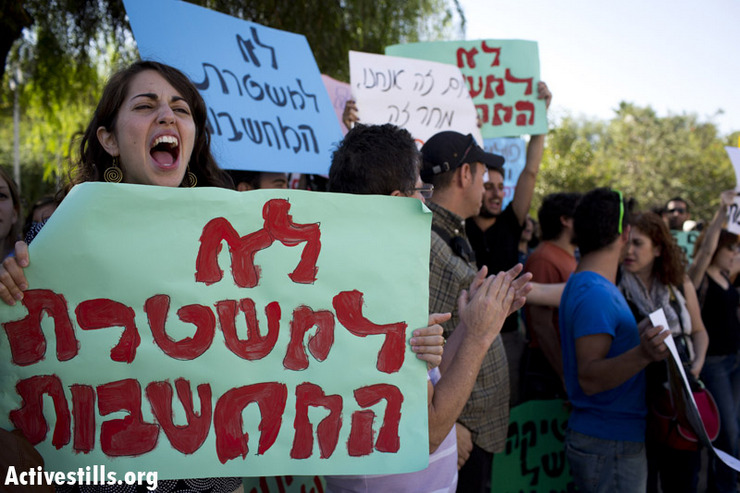 Students and political leaders protest outside the Council for Higher Education (CHE) in Jerusalem on October 30, 2012, in protest against attempts to close Ben-Gurion University’s political science department. The future of the department was discussed during the council meeting, which met in order to reconsider last month’s decision to shut down the program. When the meeting ended, the decision had not yet been published. The CHE had come to the decision to close the department after the program had been criticized by the ultra-rightist organization Im Tirzu for being “unbalanced” and teaching only left-wing political approaches. Im Tirtzu had specifically pointed fingers at members of the department’s faculty for their political opinions and activities, which it says affects their teaching. (photo by: Oren Ziv/ Activestills.org) 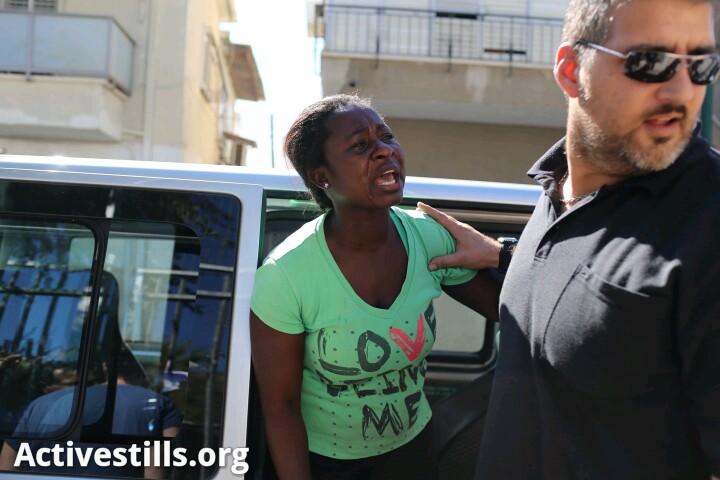 Inspectors from Oz Unit (the immigration authority) arrest a mother moments after she brought her daughter to the kindergarten in “Hatikva” neighborhood in Tel Aviv. After her arrest they went to the kindergarten and took the girl as well. The mother and her child did not have the option to go and fetch their belongings or to say goodbye to friends and family. (photo by: Oren Ziv/ Activestills.org) 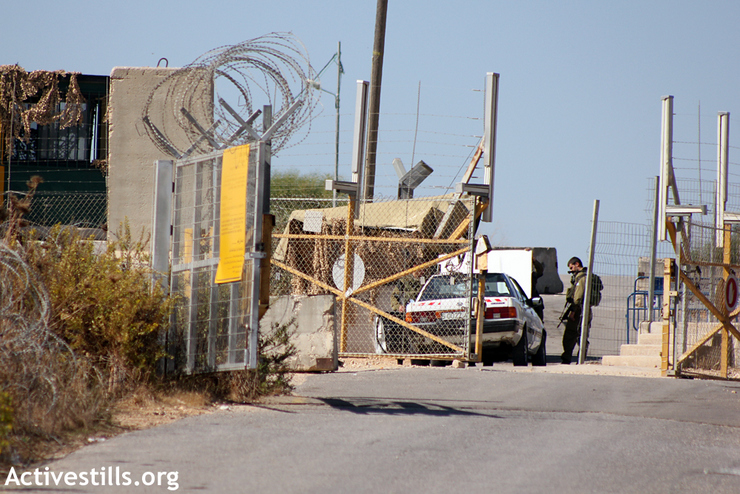 Israeli soldiers check a Palestinian car at Jubara checkpoint, Tulkarm, October 29, 2012. Jubara is an isolated Palestinian village located 6km south of Tulkarm, West Bank. It is surrounded by the wall. Only villagers of Jabara with Israeli permits can pass this checkpoint in order to enter their village. (photo by: Ahmad Al-Bazz/Activestills.org)
Get Our Weekly Newsletter