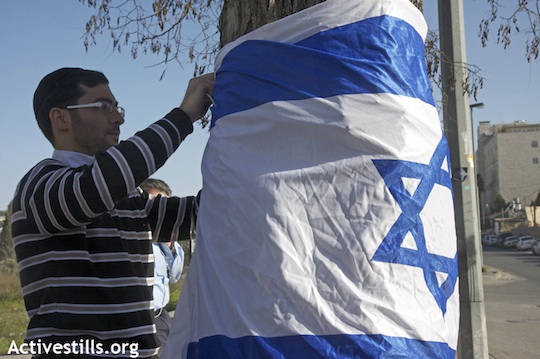 A Jewish settler attaches an Israeli flag to a tree in the East Jerusalem neighborhood of Sheikh Jarrah. (File photo: Anne Paq/Activestills.org)

The past decade has not been kind to Liberal Zionists. Israel’s far-right government has undermined democratic norms at every turn, entrenched occupation via continued settlement building, and sought to snuff out the national aspirations of Palestinians. Meanwhile, the American left has taken a harder line on Israel that shades into questioning the Jewish state’s right to exist.

Being a Liberal Zionist today means inhabiting a political no man’s land. And there is something to admire in the tenacity of its proponents. Jewish nationalism is a complex historical phenomenon that should not be reduced to the closed, exclusionary ideology which both far-right and far-left would make of it.

But political labels must eventually correspond to political realities. Just as there are no more American Federalists, French Radicals, or English Whigs, changes in Israeli society are rendering the Liberal Zionist program impracticable and irrelevant. The available evidence suggests that Liberal Zionism is destined for the same fate as those bygone parties.

The left in Israel has been on the back-foot for the better part of two decades. Israel’s Labor Party has not won a national election since 1999, and seems poised to suffer dramatic losses in the upcoming Knesset contest. The country’s rising generation is more religious and right wing than its elders, polling indicates. And racist rhetoric increasingly finds an echo in the political mainstream, from Prime Minister Benjamin Netanyahu’s notorious warning about “Arab droves” heading to the polls to Yair Lapid’s more recent denunciation of an interfaith marriage.

Nor has Israel spared Liberal Zionists in the crusade against its critics. Under the anti-boycott law passed in 2017, border agents now rifle through the reading materials of left-wing activists and question them on their political beliefs. The harassment has touched prominent liberals in the American Jewish community, among them Peter Beinart and Meyer Koplow.

The law has also been turned against the limited boycott of West Bank settlements that Liberal Zionists have long advocated. After the vacation rental service Airbnb announced in November it would de-list properties in the occupied territories, settlers took advantage of the legislation to file a class action lawsuit against the company. The government’s message to Liberal Zionists could not be clearer: swallow the occupation or be treated as anathema.

When support for a state means endorsing its repeated and unrepentant human rights violations, liberals will drop their support for that state. And rightly so, for in a modern political order, the state’s legitimacy is based on its respect for fundamental liberties, not some imagined scriptural right to land.

Liberal Zionists have acknowledged as much. Beinart, the dean of the movement, made this exact point in his landmark 2010 essay, “The Failure of the American Jewish Establishment.” He wrote at the time that “the Jewish establishment has asked American Jews to check their liberalism at Zionism’s door, and now, to their horror, they are finding that many young Jews have checked their Zionism instead.” Not even a decade later, the doorstep can no longer be avoided — this is a time for choosing.

As a recovering Liberal Zionist, I have found non-Zionism to be the most congenial self-descriptor. Political labels are amorphous, and it can be difficult to tease out the difference between non-Zionism and its more radical cousin, anti-Zionism. I would argue that anti-Zionists and non-Zionists part company in their diagnosis of Zionism’s sins.

Jewish nationalism is inherently wrong according to most anti-Zionists, either due to the folly of nationalism itself or its incompatibility with Jewish identity. Their aversion to nationalism leads them to favor a bi-national or one-state settlement over a two-state solution. Many also evince a deep-seated and vehement distaste for Israel that extends past questions of politics into the cultural domain.

Non-Zionists have less issue with Jewish nationalism itself than in how Zionism has been developed as an official rhetoric and policy of the state of Israel. The triumph of the far-right’s version of Zionism was not inevitable — it resulted from concrete and contingent historical processes. There were various junctures in Israeli history when a liberal (and acceptable) version of Zionism could have won out. That did not come to pass, and most likely will not. Non-Zionists refuse to delude themselves otherwise and champion a human rights-first perspective free of ethnic or partisan allegiance.

The distance between non-Zionism and Liberal Zionism might seem small indeed – perhaps not great enough to warrant separate names, but the Zionist label can derail the alliances that many liberal American Jews hope to forge with Palestinian and left-wing activists. And making a clean break with Zionism recognizes that resolving the Israel-Palestine conflict will come not from an inside game of internal critique, but rather through the external pressure of Western governments and protesters.

Liberal Zionism is an anachronism. But non-Zionism preserves its best elements: the refusal to privilege ethnic concerns over universal ones, a commitment to nuance, and moral imagination in the face of occupation’s immorality.

Daniel J. Solomon is a freelance writer based in France.