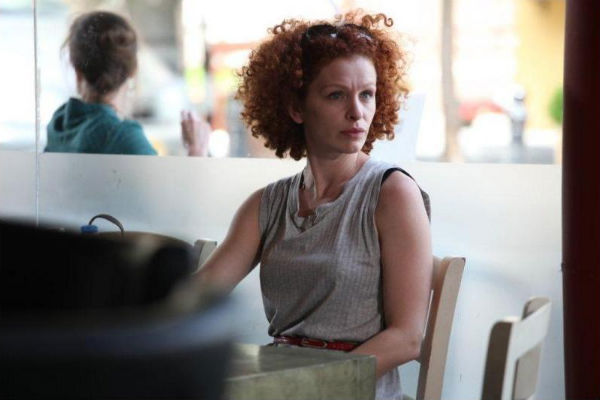 Hila Feldman in Moshe Ivgy's "And on the Third Day"

It’s simply wrong to describe a film’s ending just as it’s being released. There’s no harm in endlessly quoting the last line from “Casablanca” once it’s been around for decades, but doing so to “On the Third Day”, Israeli cinema’s latest offering, and the first film to be written and directed by acclaimed actor Moshe Ivgy, would be a mild offense.

I am about to commit this offense, because that ending is meaningful not only on a cinematic level, so please take my spoiler warning seriously or else just get over caring about endings. After all, “And on the third day”, which is to be screened with English subtitles nationwide, isn’t even plot driven. It’s the sort of film in which every scene and every charecter is a story on its own, from the IRS employee (Alit Krayiz) uncovering corruption at her department to the posh prostitute (Hila Feldman) learning to recite Japanese for a client while her mother is dying in the hospital.

The film’s characters all try to survive in a Tel-Avivian landscape that screams of unrest. This isn’t the political unrest we tend to discuss on this site. The Occupation isn’t present in the film and not one of its charecters is Palestinian, but tension is bred by tension and all violence is the same. Ivgy centers on violence towards women as an emblem of violence in our society. The tax lady is targeted by evaders, the prostitute is hired to fulfill dark fantasies, a young girl from the south (Gal Salomon) who came to the city to track down an elusive lover is harassed by every man she meets except one.

Then, at the very end of the film, violence erupts on men and women alike. It comes from the sky in the shape of bombs. The Tel-Avivians take war more or less for granted. We’ve been waiting for it for such a long time. People are seen running for cover automatically, wordlessly, as if drilled.

A particularly powerful image is that of the Haaretz news desk during the war’s eruption. The young southern girl arrives there at precisely that miserable timing. She must deliver documents incriminating the tax evaders – one of whom is running for prime minister – to one of the reporters (due to the choice of newspaper, this reads like a possible Anat Kamm reference). The desk itself is in a mix of hecticness and shrugged acceptance. Some are rushing to deliver new information, others are having pizza.

It’s a tradition of sorts in films that join several plot lines to end in calamity. Robert Altman’s “Short Cuts”, based on the stories of Raymond Carver, concludes with an earthquake that shatters LA. The many threads of Paul Thomas Anderson’s “Magnolia” are tied by a fantastic rain storm of toads. Such “demonas ex machina” technique isn’t foreign to Israeli cinema. Asi Dayan’s “Life According to Agfa” which introduced diverse Israeli stereotypes in a Tel-Aviv pub environment, culminates in a bloodbath.

Ivgy’s ending isn’t exactly a bloodbath. There is something almost soothing about his rain of fire, which is far less graphically presented than are situations of interpersonal violence. Indeed, the catharsis of regional violence liberates the charecters of their personal violent confrontations and of the highwire tension which took control of their lives. The prostitute and tax lady find themselves freed from their predators, running for shelter on a burning street. They are endangered, yes, but together. An estranged couple return to an embrace. A disavowed father hears himself being called “daddy” for the first time.

This isn’t a fantasy of fire. Ivgy is making a statement of great value. We are trapped in a deeply unhealthy state of constantly impending disaster. It’s so hard to grow, or love or create in such a state. It’s a miracle that we still do. We need to be liberated, preferably not by war, but somehow. “And on the third day” can be read as a cry for help voiced by an entire society. If we’re wise enough to listen to it ourselves and know that our fate is in our hands, the ending to our tale may be different.