Even the most off-hand displays of white supremacism and anti-Semitism — perhaps especially off-hand, “normalized” displays — are not only deplorable in their own right, but directly affect conversation on racism, anti-Semitism and Israel-Palestine.

Reports of anti-semitic incidents in the UK have risen by 11 percent in the first half of 2016, according to a recent report by the Community Security Trust, a UK organization providing security guards to Jewish schools and synagogues. Anti-semitism has figured heavily in headlines over the past year, especially in the context of the Labour party leadership race. The incumbent leader, Jeremy Corbyn, has been accused of being “too soft” on anti-Semitism among his supporters. The controversy has seen the distinction between anti-Zionist and anti-Semitic comments challenged vigorously by figures from the center rightwards, and a mix of soul-searching and recriminations on the Left.

In this context, even the most off-hand displays of white supremacism and anti-Semitism — perhaps especially off-hand, “normalized” displays — are not only deplorable in their own right, but directly affect national conversation on racism, anti-Semitism and Israel-Palestine.

The Tuesday night event, hosted by the local Snow Sports society at the Timepiece nightclub, saw guests use magic markers to scribble slogans and drawings on each other’s uniform white t-shirts. Most scribbles ranged between the bantering and the generically sexist — belaboured innuendos on the word “slope” appear to have been in vogue during the evening — but two rather different slogans stood out: “Don’t speak to me if you’re not white,” and, “The Holocaust was a good time.” 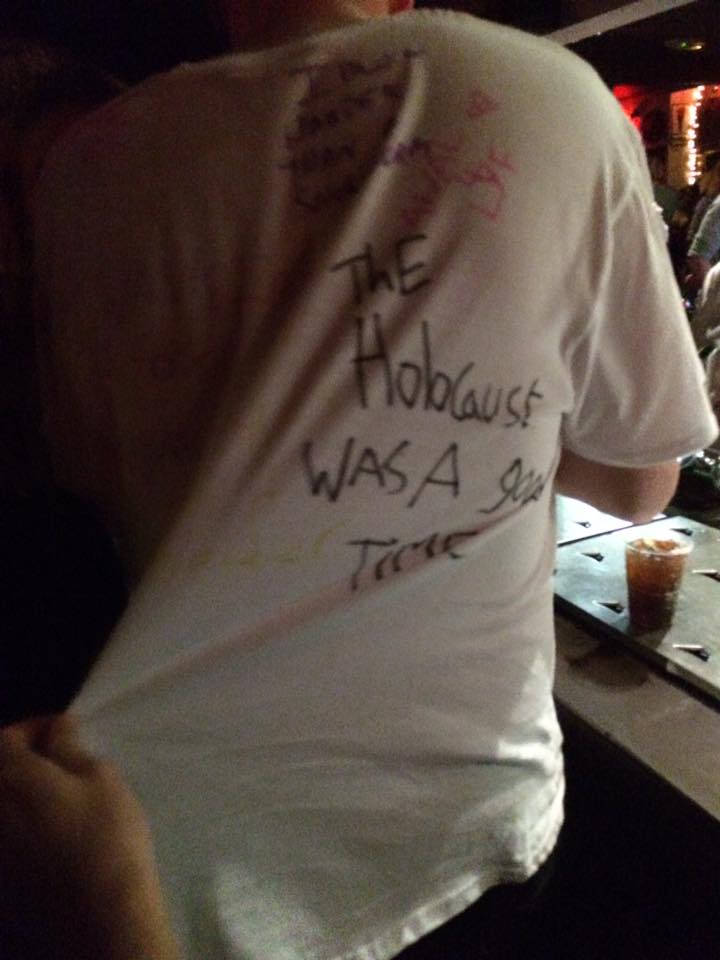 Pictures of the shirts were taken by Palestinian student and posted on Facebook. “Making light of genocide and white privilege is not ‘banter’, you f*** imbeciles,” the student wrote.

She said that the slogans were drawn on the back of the t-shirts, and it’s unclear if the students wearing them were also the ones who wrote the comments.

“They were all wearing theses white t-shirts with stuff written on them,” the student, asked to remain anonymous, told +972. “I asked if I could take the pictures and they didn’t seem to mind.” She added that nobody seemed to be challenging the students about the shirts. Because the photos were taken from the back, the students wearing the shirts could not be positively identified.

Lauren Fry, the president of the Snow Sports society, said she was not aware of the slogans during the event. “Comments like these are not tolerated within our club,” she said. “Unfortunately, as only eight committee members, we can not be responsible for everything written by other students, especially when there is over 1,000 people. Timepiece were asking people to leave or change if they were seen in the venue with any abusive slogans on their t- shirts. As far as I’m aware no complaints were made. We apologise if we offended any one and we feel appropriate action was taken on the night to deal with these type of slogans if they were seen on anyone at our social. Snowsports has a zero tolerance policy for these actions and we will be contacting our members in due course to express this.”

A University of Exeter spokesman said: “The university does not tolerate racist or bigoted behaviour in any form. This is the first we knew of this and shall be launching a full investigation.”