As the death of legendary Israeli singer and actor Arik Einstein became a nationwide event, it became clear that some of his mourners were more interested in lamenting what they saw as the end of Ashkenazi rule in Israel. Tom Pessah talks about the role that someone as great as Einstein can play in creating real change. 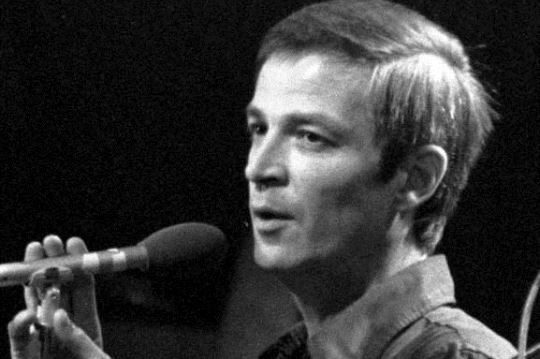 I spent yesterday working on my dissertation at Tel Aviv University. Israeli students can be noisy, even in libraries, but the Sourasky Central Library is generally very quiet. I have my own corner on the first floor where I can hook up my laptop and get a good view of the entire hall, which helps me concentrate.

Five minutes into my work session, I began hearing music coming from outside. It was noon, students were sprawled on the grass between the library and the Gilman building, with loudspeakers blaring Arik Einstein songs. It was the day after his passing. I had only briefly forgotten.

But then, I heard “Crying for You,” the song Einstein performed after Yitzhak Rabin’s assassination, which overnight had become somewhat of an obituary for the singer himself. But the song was not coming from the outside: the library itself had put it on its loudspeakers. I can’t remember anything like this happening through all my many years of study at TAU. Along with the photos of the crowd filling Rabin square (where Einstein’s coffin was exhibited), these were more indications that this was no ordinary death, but rather a national event.

I liked Arik Einstien. But this is not even about liking. Some people are just objectively, self-evidently, great artists. At his peak, Einstein had the gift of combining a Sinatra-esque, nonchalant self-controlled manner, with an emotion that could bring tears to your eyes. Among his earlier materials were genuine protest songs such as “Chocolate Soldier,” whose lyrics were written by the playwright Hanoch Levin, and was banned from the radio for depicting the unnecessary deaths during the War of Attrition between Israel and Egypt. “Prague” was a heartbreaking expression of solidarity with Czechoslovakia after the Soviet invasion. Above all, his rendition of “You and I Will Change the World” will forever remain an anthem of hope to be celebrated by every generation of activists in this country. I even heard it quoted by a Palestinian at a conference on the Right of Return.

You and I Will Change the World:

But Einstein also had another side: he used his unmistakable talent to soften oppression in order to make it cute and palatable for the mainstream. In “Song of the Caravan,” the long caravan is a metaphor for Zionism itself. Accompanied a beautiful Greek melody, Einstein lovingly imitates Prime Minister David Ben-Gurion’s voice, prophesying that the Negev desert will bloom, and promises to “make the ‘old man’ happy” (the “old man” was a nickname given to Ben-Gurion). The Bedouin residents of the “empty” desert were either expelled by Ben-Gurion in 1948 and throughout the 1950s, or are residing in villages still unrecognized by the state – but they are never mentioned.

Einstein was also an actor and a comedian. One famous sketch traces the history of Zionism from its inception through a series of humorous exchanges between locals and each new wave of immigrants. This history lesson glosses over devastating tragedies like the Nakba, or the well-documented massive kidnapping of immigrant Yemenite babies in the 1950s (Hebrew):

Einstein was a supporter of the liberal Zionist peace camp and would never have allowed his funeral to be appropriated by Netanyahu (in 1986 he wrote a song following years of Likud rule entitled “Oh My Country, You’re Going Down the Drain“). But Einstein’s entry into the mainstream can teach us something about the failure of the liberal Zionist camp. Since his death, there has been an outpouring of grief on Facebook, with people connecting Einstein’s humble, laudable character to his noticeably Ashkenazi features. One user wrote: “yesterday a giant base [for our society] was taken away from us, and we will stay here, at this rate, with only the blacks and the Levant, and without the beautiful and charming Israel.”

According to Haaretz (Hebrew), comparisons are being drawn between Einstein and Eyal Golan, another popular Israeli singer. Golan, who is Mizrahi, was recently accused of having sex with a 15-year-old girl. Former Minister Yosef Paritzki of the secular, liberal, Ashkenazi Shinui Party lost no time in distancing himself from Golan’s fanbase, as well as from the soccer fans of Beitar Jerusalem, known to be mostly comprised of Mizrahim: “I am shocked at the thought that their vote in the elections is equal to my vote and that of my friends. Something is screwed up about democracy, is it not?” he wrote on his Facebook page.

How does all this all tie together? Israel’s business and political leadership remains Ashkenazi. When Ashkenazim like Einstein support liberal Zionist peace efforts, they remain identified with this elite, regardless of their personal politics and behavior. As long as we have no alternative politics, based in genuine cross-cutting solidarity between Ashkenazim, Mizrahim, Palestinians and the many other groups that make up this country, nothing will change. General pleas for peace won’t change a thing. And culture, seemingly a-political, could actually play a huge role in that transformation. Especially when we’re talking about a singer as talented as Einstein.

More +972 commentary on the death of Arik Einstein:
In the diaspora, Arik Einstein defined ‘Israeliness’ / By Edo Konrad
Arik Einstein: The iconization of a non-icon / By Noam Sheizaf