“One of the girls is sitting on the bench beside me; an officer places his fist on her head and tells her ‘If you dare speak even a single word, you shall be punished.’ We are screaming and struggling as they take her away, but they shove us back to our seats, yelling ‘Sit down you stinking Arabs,’ and ‘Don’t you move, bitch.’ We can hear the tasers at work in the other room.” 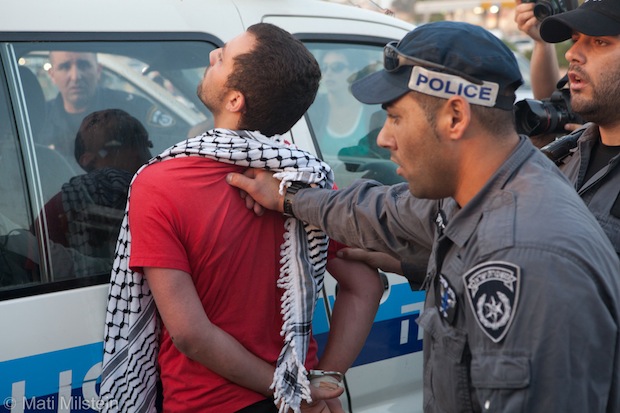 Israeli protesters arrested after a demonstration in solidarity with Palestinian hunger strikers in Ramle on May 3 testified to suffering extreme police violence and abuse while in detention. Their complaints have been filed by Adalah with the Justice Ministry’s department for police investigation. Here is one protesters’ personal testimony.

It is Thursday and we’ve come to protest in front of the Israeli Prison Service hospital in Ramle, in which some of the hunger striking Palestinian prisoners are held. They are held there despite the fact that it’s past time that they were moved to a civil hospital. They are held there despite the fact that the prison hospital can’t provide them with the necessary medical services, which they required. They are held there confined to their beds, highly guarded, as though a person who’s been on hunger strike for over 60 days can try to escape. We come to support them and the others that are fasting against unjust imprisonment in atrocious conditions.

It is very painful, and I’m screaming. Another cop grabs my other hand. Together they manage to pull me out. They make me stand, although my legs feel numb, and drag me to the police van. We are driven to the police station, three of us sitting in the back, four guys squeezed together in a seat made for three, with a cop standing, leaning over them, squeezing them further.

We are sitting at the station leg shackled to one another, waiting to be interrogated, although we were never informed that we are either arrested or detained. There are only two of us girls. The boys are in the other room. We are still kindling hopes of quick release, when we start hearing people yelling and shouting outside, and soon enough they start bringing them in. Several cops carry each one of them, and they are thrown on the floor, kicked and beaten. We are yelling “What are you doing?” and “Stop beating them” and try to reach our friends, who are under the policemen’s boots, but that only earns us our own share of punches and kicks, and we are pushed back to our seats.

One of the girls is sitting on the bench beside me; an officer places his fist on her head and tells her “If you dare speak even a single word, you shall be punished.” We are screaming and struggling as they take her away, but they shove us back to our seats, yelling “Sit down you stinking Arabs,”, and “Don’t you move, bitch.” We can hear the tasers at work in the other room, and there’s nothing we can do. When she is brought back, she can’t stop shaking.

From that point on the threat of the tasers is out there and always present, buzzing in the office next door, or posed as a threat, every once in a while. When they lead me out to be interrogated they turn them on again. I try to run back, to be with my friends, but the policeman gets hold of me, and says that I’m going to come with him now, either willingly, or handcuffed, and he doesn’t really mind either way.

Worse than the physical violence are the humiliations and sexual harassment. They laugh at me for being near-sighted. They tell me that I can’t see, they say that I’m blind. They use it as an excuse to push and shove me whenever they are taking me anywhere. I haven’t fell this way since grade school, and they know exactly how they make me feel. They call us whores and bitches, and threaten to fuck us. When I’m left alone with another girl, a cop comes by to let me know that since I’m Jewish and she is Arab she is “gonna kill you someday.” Then he closes the door and says “I should leave you two alone, blow her,” When it’s her turn to be interrogated they grab her and say “Bring the stinking whore.” I demand to speak

with the head officer in the station, and complain about the harassment(s). I don’t get to talk to him, but I do get handcuffed for three hours.
At long last we are leaving the station. When they take us to the van, they take us out of the station one by one. Outside the station at least half a dozen cops are sitting and waiting, giving each one of us a last round of humiliations before we leave. As we sit and wait inside, they thump the van, throwing stones and insults at it as a farewell.

When we got to Neve Tirtza (all-female prison facility) we are taken to the infirmary. We aren’t examined, only interviewed. The paramedic asks me “Are you feeling alright?” to the puzzeled look I give her she replies with “Given current circumstances, of course.” So I say “No, I’m not feeling alright. I was beaten and sexually harassed all night long,” and the policewomen that was with us in the room said “Well, that’s what the police are for.”

In court they demand to extend our arrest for four more days, allegedly to continue our interrogation. The judge decides on house-arrest instead, and prohibits us from talking to one another, or anyone else that was present in the demonstration, for two weeks. We are released, after we got a glimpse of what Palestinian prisoners experience daily. We are released, but so many remain behind bars, with no trial, and with no hope for justice. We are released, and while we can’t partake in it for a short while, la lucha continua.
_________________

Get Our Weekly Newsletter
Before you go…
A lot of work goes into creating articles like the one you just read. +972 Magazine is nonprofit journalism, owned by many of our writers, editors, and journalists. In order to safeguard that independent voice, we are proud to count you, our readers, as our most important supporters. With your support, we can keep +972 Magazine a strong, independent, and sustainable force helping push the global discourse on Israel/Palestine.
DONATE
More About Adalah