New and old media has gone abuzz with news that a U.S. strike on Syria could come as early as Thursday. And just as Israel’s cabinet ordered a “limited” call up of reservist soldiers, a map outlining all the threats Israel faces suddenly popped up in my social media feed, courtesy of the Israeli embassy in the U.S., and published on BuzzFeed. 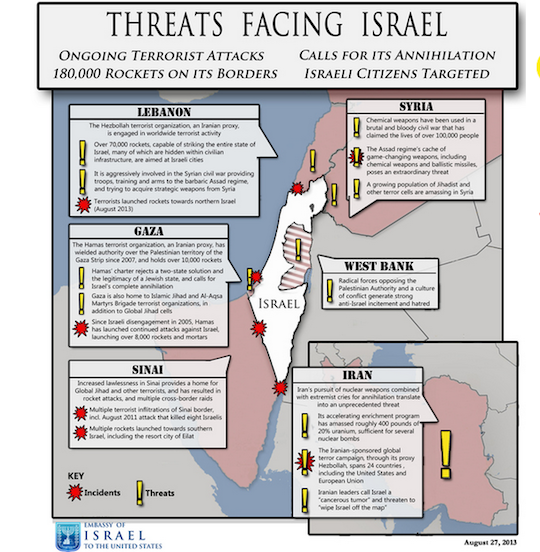 The timing of this alarmist map couldn’t be more strategic. As the U.S. mulls some kind of strike in Syria (with absolutely no convincing arguments about how it will improve the situation for Syrian civilians) Israel is playing up the victim card, emphasizing that it is in a rough neighborhood surrounded by entities that want it destroyed.

Obviously there are real threats of violence: from Hezbollah, extremists in Sinai, and it ain’t easy sharing a border with a country at war – just ask Jordan, which is receiving the most refugees from Syria. I’m sure it can tell you how hard it is. But to say that the West Bank poses a threat to Israel?

According to the Israeli embassy text:

In the West Bank, radical forces opposing the Palestinian Authority and a culture of conflict generate strong anti-Israel incitement and hatred.

First of all, it is ludicrous for Israel to call the West Bank a threat since it controls and occupies it, and it is especially infuriating considering it just shot at unarmed protesters, killing three Palestinian men and wounding over a dozen others in Qalandiya on Monday. Secondly, saying the West Bank is a breeding ground for “a culture of conflict” is incendiary and essentially racist, implying all Palestinians are violent by nature.

At a time when civilians in Egypt, Syria and Lebanon are being killed off indiscriminately, when Palestinians are as ever subject to military dictatorship, the almost half-century-old Israeli occupation is one of the most stable elements in the region. So what could be better for Israeli PR right now than to play up its victimhood in the region, so that it can continue to do as it pleases with impunity? That way it has every excuse it needs to avoid, postpone and thwart progress on a negotiated agreement with the Palestinians.