‘We call on the Israeli government to stop all diplomatic and economic ties with Eritrea, including ending Israeli military presence on Eritrean islands, suspending the sharing of intelligence, and stopping all economic support to the dictatorship.’ 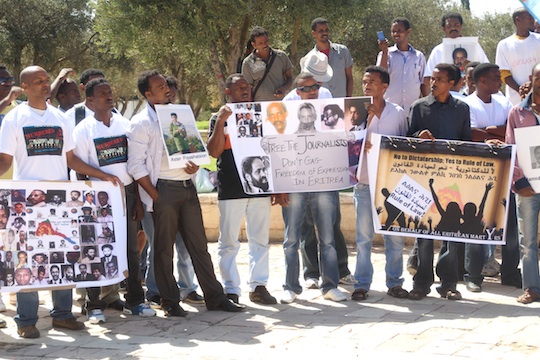 More than 100 Eritrean asylum seekers traveled to Jerusalem by bus on Sunday to hold a demonstration in front of the Ministry of Foreign Affairs. The protesters tolerated the hot weather in order to properly convey their message to the Israeli government.

The slogans of the demonstrations called on Israel to stop supporting the Eritrean dictatorship and halt all relations with it. They also called on the Israel government to work to release political prisoners held in Eritrean prisons.

Ahead of the demonstration, Eritrean asylum seekers worked together to draft a letter on behalf of the community. I read this letter at the protest, and it is printed here in full:

We, the Eritrean asylum seekers in Israel, are calling on the Israeli government to end all relations with the government of Eritrea. We can only go home to Eritrea when our country is safe and right now Israel’s support for the dictatorship is making this dream even farther from reality.

We call on the Israeli government to stop all diplomatic and economic ties with Eritrea, including ending Israeli military presence on the Eritrean islands of Dahlak and Fatma, suspending the sharing of intelligence, and stopping all economic support to the dictatorship.

The vast and grave human rights abuses carried out by the Eritrean regime as well as the Eritrean government’s support for terrorist organizations like the Al Qaeda affiliate Al Shabab have caused the United Nations, United States, European Union, Canada, and Australia to all sanction Eritrea. Israel is a powerful country on the international arena and we believe that Israel should join the rest of the world and call for democracy and human rights to be restored in Eritrea.

Eritrean asylum seekers in Israel want to go home. Right now Israel is part of the reason why we cannot. Stop your relations with Eritrea.

We envision an Eritrea that is peaceful and democratic. Such an Eritrea would be the friend of the world, including good friends with Israel. Having a longstanding relationship with a democratic Eritrea is more in Israel’s interests then supporting an Eritrean dictatorship whose stability in the region is in question.

This week marks the 11th anniversary of the arrest of the G-15, a group of government ministers and other prominent individuals who called for democratic elections in Eritrea. They have never stood trial or heard their charges, many are presumed dead following years of torture in underground chambers. With the thousands of political prisoners suffering in Eritrea in mind, we will use this opportunity to tell you about the dictatorship prison known as Eritrea.

The totalitarian regime in Eritrea uses unlimited conscription to the army as a way to keep control over the people. Men and women soldiers from ages of 18 to their mid-50s are subjected to forced labor; their army service includes farming officer’s agricultural fields and building construction projects not for the benefit of the state but rather to supplement the pockets of those close to the government. Eritreans who oppose their enslavement in the military are put on black lists, tortured, imprisoned in underground dungeons, and many are murdered. Individuals caught deserting their mandatory service are arrested, tortured, and may be killed.

Similarly, Eritrea bans all independent media; anyone thought to be publishing alternative information is summarily tortured and imprisoned. Even those that work for the one state-run television channel are constantly under surveillance as the government seeks out potential dissidents. Eritrea goes as far as to limit freedom of assembly; anyone who wants to gather more than three people must have a government permit.

We would be very happy to meet with you and further discuss these issues and are looking forward to hearing from you soon to arrange a meeting.

Thank you very much.

Isayas Teklebrhan is an Eritrean refugee who has been living in Israel since 2010. He has a degree in physics from the University of Asmara in Eritrea. He left Eritrea after spending seven years in prison for his pro-democracy advocacy.

For more on the issue, see +972′s special coverage on Seeking Asylum in Israel 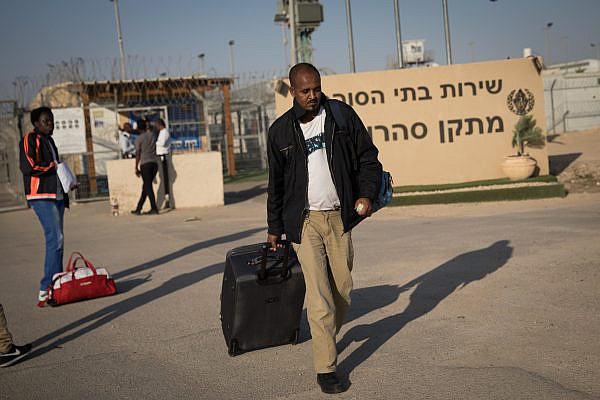 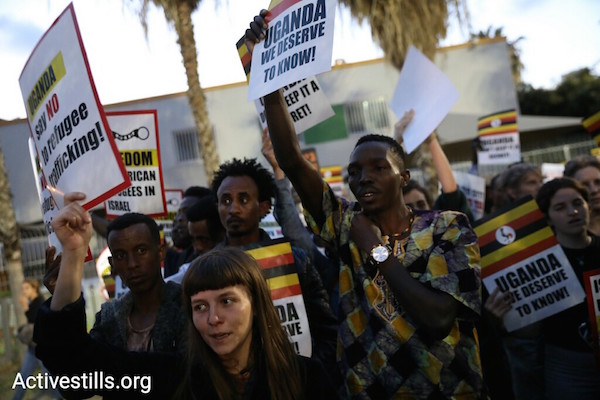