A new report by a refugee organization says the food Israeli prison authorities provide to African asylum seekers being detained in Holot does not meet their nutritional needs. During the Ramadan fast, the many restrictions on food in the ‘open’ facility make life even tougher on Muslim asylum seekers from Darfur. Some detainees say the hardships are intentional, part of a wider policy aimed at pressuring them to leave Israel. 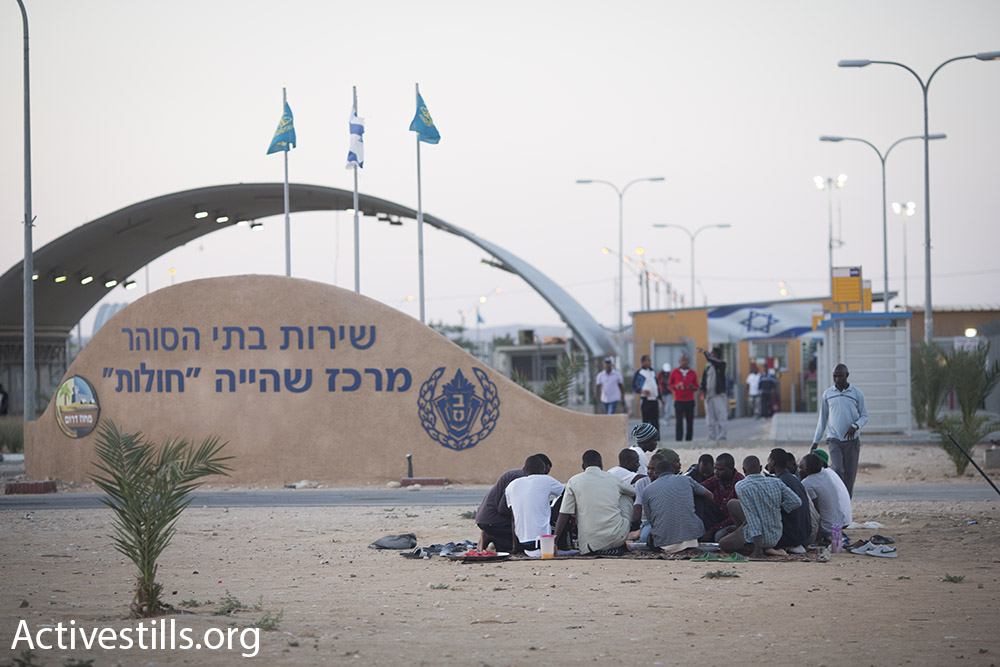 Sudanese asylum seekers sit in groups outside the gates of the Holot detention facility while they wait for the daily Ramadan fast to end, July 2015. (Oren Ziv/Activestills.org)

Just before eight at night, as dinner is being served inside the prison, hundreds of asylum seekers being held in Israel’s Holot “open” detention facility leave through the front gates into the open desert. Some of them head toward the hills in order to prepare meat over an open fire, others make their way to makeshift restaurants along the fence in order to break the daily fast during the Muslim holy month of Ramadan. A large number of the detainees pass on the meals served inside.

According to a new report published by the Hotline for Refugees and Migrants on Wednesday, the food served to detainees in Holot does not meet their basic nutritional needs. “When the Holot facility fails to provide adequate nutrition options, and the detainees are not given enough money to buy food outside of Holot, a very real food insecurity problem is created,” public health researcher Megan Cohen wrote in the report.

The three meals a day Israeli prison authorities provide to detainees in Holot are largely composed of empty carbohydrates like white rice and bread. The only source of protein on most days is a hard-boiled egg and a small packet of cheese. “The food provided by Holot is not enough to meet basic nutritional requirements,” the report says. “Even in emergency contexts where there are limited resources available, international organizations consistently strive to uphold a minimum standard of basic nutrition for the population they are serving. This includes 2,100 calories per person.” 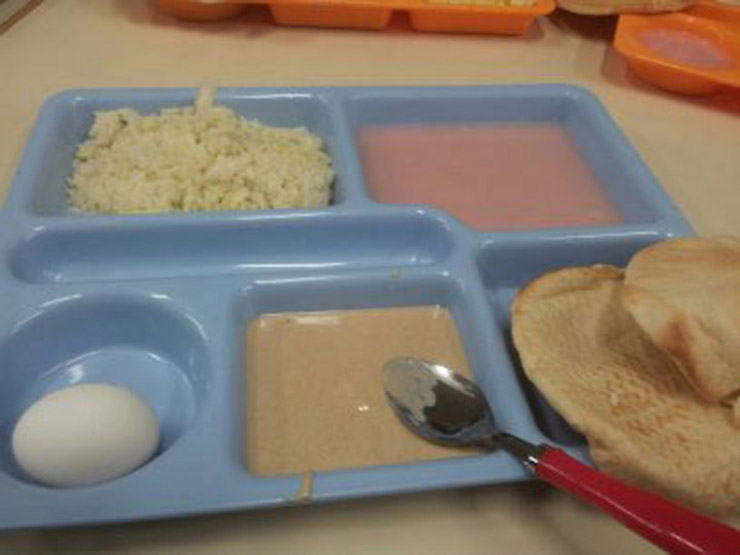 A photo of the food prison authorities serve asylum seekers detained in Holot, provided to Activestills by a detainee in 2014.

The fact that the Israel Prison Service refused to provide nutritional information makes it difficult to form nutrient calculations, Cohen noted, “but the information gathered from testimonies leads me to believe that basic nutrient requirements for an adult male are not being met.”

“The Ramadan fast in Holot is a lot easier,” Jack, an asylum seeker from Sudan and a detainee at the prison facility, says to me with a healthy dose of sarcasm. “When I was [not in prison] I worked all day during Ramadan. Here we sleep most of the day anyway, both on Ramadan and on normal days. So there’s not much of a difference.”

“The restaurants outside [the prison gates] are operating in a special framework because of Ramadan,” Jack explains while he sits outside the prison, having just finished his meal to break the daily fast. “Usually a serving of meat costs 20 shekels, but during Ramadan everyone pays half price and eats however much he wants. The restaurant owners aren’t making any profits, they’re just covering their costs.” 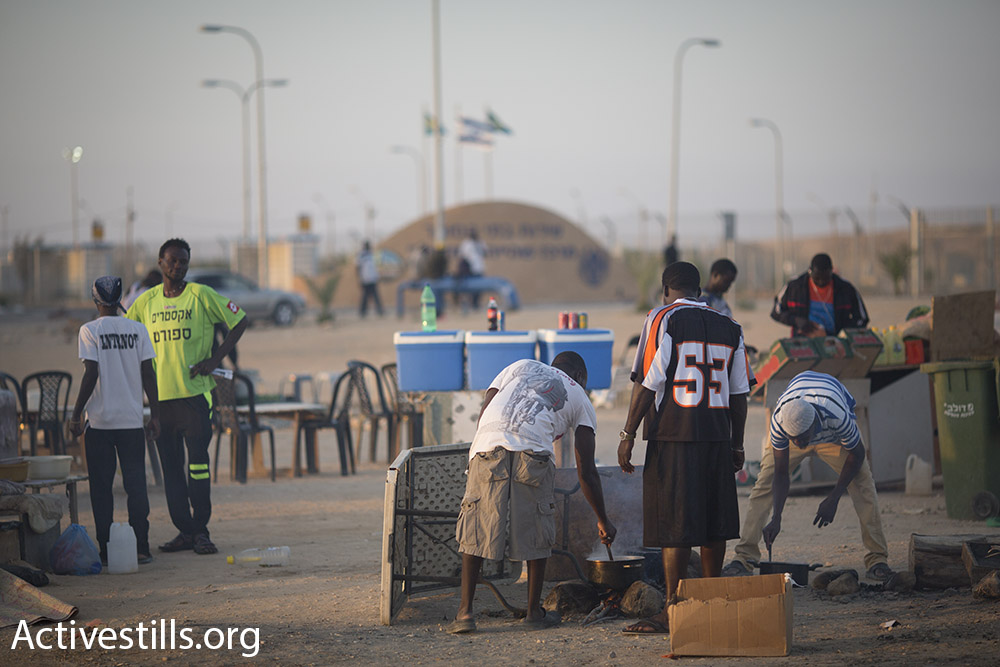 Asylum seekers detainees in Holot have opened some makeshift restaurants outside the prison gates to serve fellow detainees. They are forced to store their supplies in old cars parked nearby because authorities won’t allow them to bring any food inside. (Oren Ziv/Activestills.org) 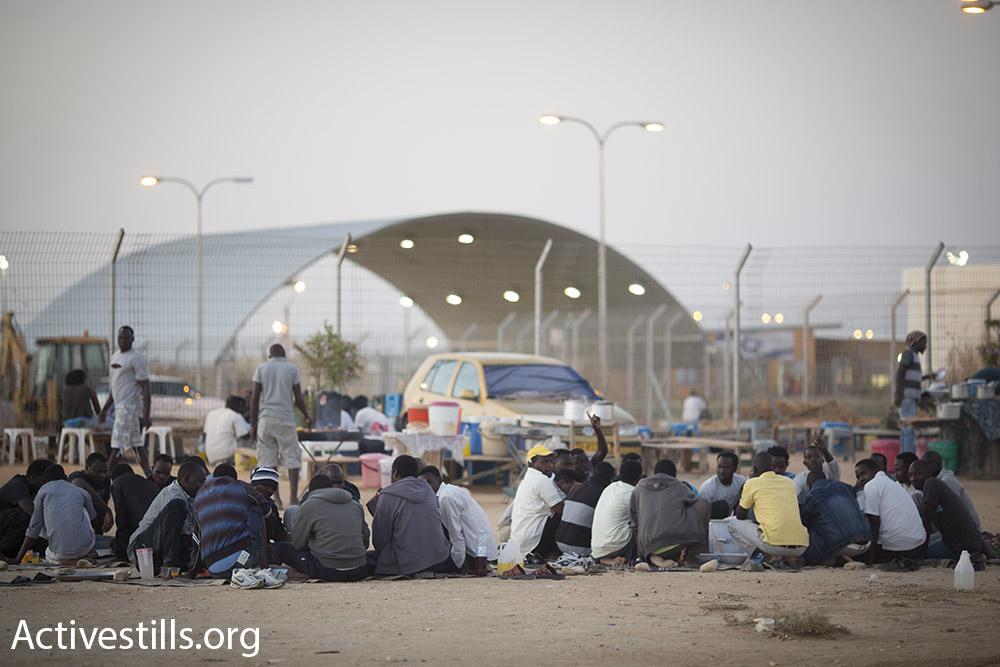 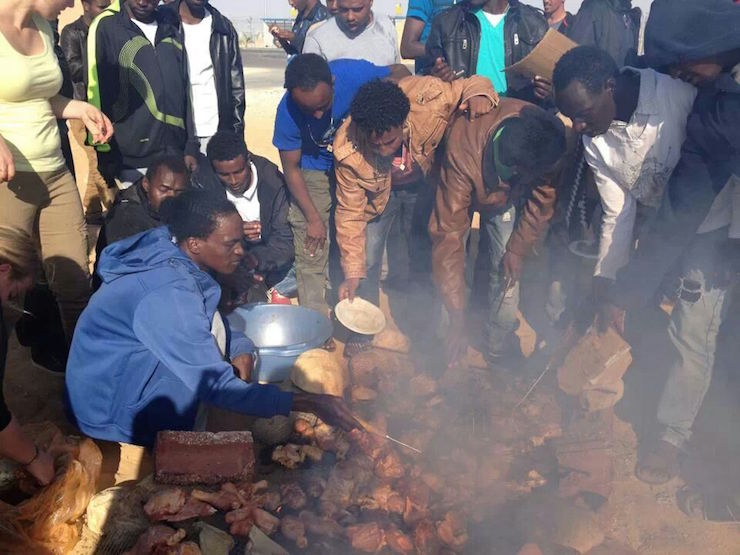 Asylum seekers cook meat outside the prison walls, photo provided to Activestills in 2014.

Hundreds of asylum seekers from Sudan sit in groups on the ground outside the detention facility waiting until a few minutes before 8 p.m. when they can eat. The makeshift restaurants belong to detainees and were established a few months earlier in order to meet the demand for more nutritional and satiating food. They serve traditional Sudanese food.

In the past the detainees built straw huts to sell food out of but prison authorities tore them down. Now the restaurants operate out in the open, with chairs and tables they built from scrap pieces of wood. They keep the food, equipment and rudimentary supplies in old cars they keep parked outside the prison. Authorities will not let them bring any food items inside the detention facility.

After the meal many of the asylum seekers hold prayer services outside the prison and sit with friends smoking water pipes. They have until 10 p.m., when they have to be back inside the facility for a roll call.

Each asylum seeker I spoke to outside Holot this week described the food inside as inedible and not nutritious. Many of them told of undercooked rice, over-salted and entirely tasteless food. The food is much, much better in the actual prison, Sahronim, where actual criminals are held across the road, Jack explains. “If you are hungry in Sahoronim they’ll take care of you. Here, nobody cares if you’re hungry.” 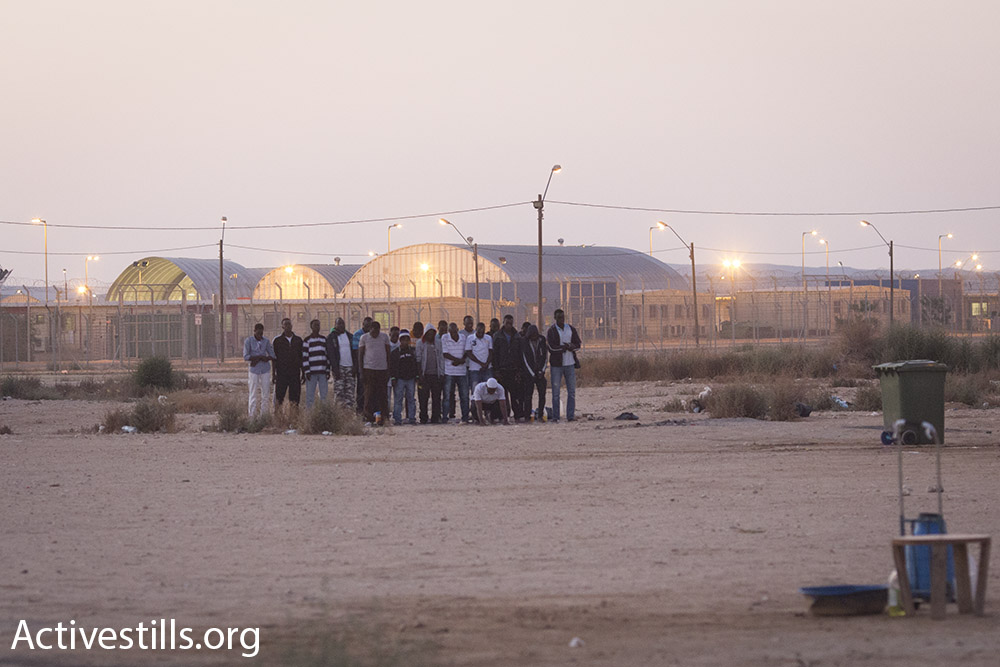 Sudanese asylum seekers pray outside the gates of Holot during the Muslim holy month of Ramadan, July 2015. (Oren Ziv/Activestills.org)

“The food they serve here is part of the overall policy of Holot prison,” Jack continues. “The point is to make us miserable so that we leave. They are scared that if they bring us decent meals that we will survive here for longer, and their goal is to make us leave. If we were able to bring in food from the outside we would be able to to be independent, to improve our own lives.”

But with stipends of NIS 160 ($40) every 10 days, most detainees can’t afford to eat outside of the prison every day, or even to buy their own food. “I eat out only twice a week,” Jack says. “I have to pay for cigarettes, soap, and even mineral water, and of course credit for my cellular phone in order to stay in touch with the outside world and stay updated. But during Ramadan I’ve been eating here every day. If they didn’t organize these meals outside, most people wouldn’t be able to fast this month.”

There are also those who try and find a more optimistic view of their situation. “Last year was harder to fast because we didn’t have air conditioning in our rooms,” says Jamal Yaqoub, an asylum seeker from Sudan. 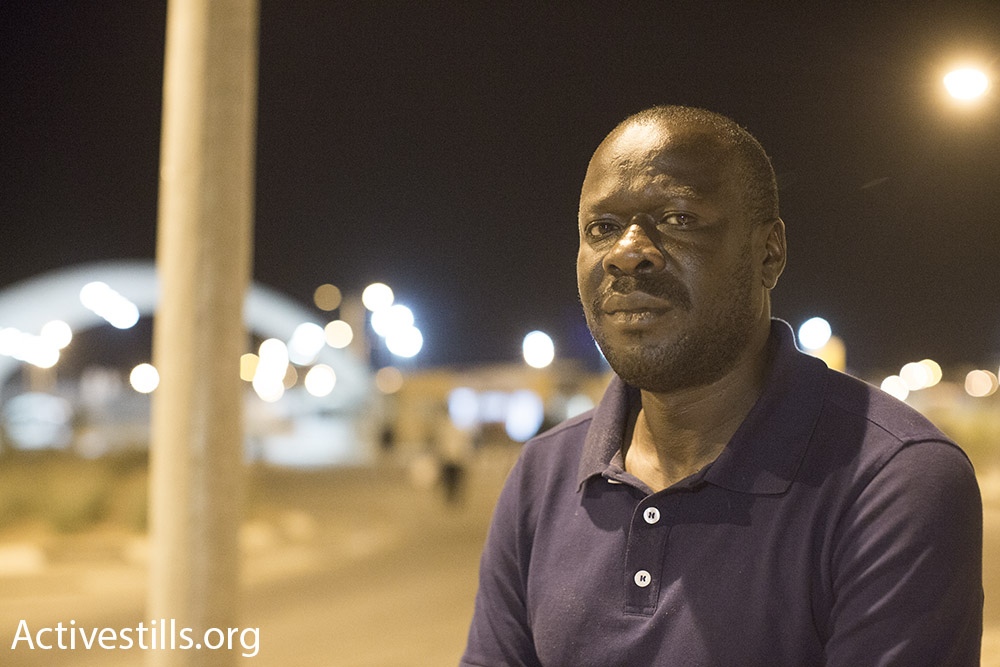 The prison authorities only installed air conditioning and heating following a petition to the High Court of Justice last winter, when the IPS was ordered to install climate control systems in living quarters.

“They won’t even let us bring bottles of water or juice inside,” Jamal continues. “I eat outside [the detention center] once a day. I have lost eight kilos (17.5 pounds) since the holiday started and I feel weak.”

Because detainees have to go back inside the gates at 10 p.m. and they are not allowed to bring any food in, they say they have great difficulty having their morning meal, before the daily fast begins. Authorities serve an early breakfast at 3 a.m. but Jamal asserts that it consists of one container of yogurt for 10 people.

“We’ve had tough lives,” Jamal says. “At the beginning of the war in Darfur they burned everything, the whole village and then there was nothing to eat. After that we were in a refugee camp, there we waited for the UN to bring us food and water, and when they didn’t come we didn’t have anything to eat. It’s the same here in Holot. It’s just the continuation of our ongoing situation, and I hope that we get a solution soon.”

The Hotline for Refugees and Migrants report deals with living conditions for detainees at Holot and the Israeli government’s efforts to pressure them to leave Israel for a third country. More than half of the detainees have been sent — not by judges but by prison authority officials — to the nearby criminal prison for months at a time. Prison authorities also use administer fines as punitive measures, and forbid detainees from bringing in many person items.

The report also discusses a number of Eritrean asylum seekers whose asylum claims have recently been rejected by Israeli authorities. Now, they are facing indefinite detention in the criminal prison if they do not “agree” to leave for a third country where they are not guaranteed any legal status. Israel has not granted refugee status to a single Sudanese refugee.

This past week the state agreed to release a Sudanese asylum seeker from Holot because it had refused to examine his asylum claim. Israeli law stipulates that authorities must examine asylum claims of detainees at Holot within a fixed time period.

The Israel Prison Service said in response that “the food in Holot is based on nutritional tables that were built by a dietician and professionals, like all other IPS facilities. In accordance with orders from doctors at the facility, special food is provided for sick people in Holot (over 40 people each day). Bringing in food [by detainees] is forbidden for reasons of insurance, health and security. All of the nutritional needs are being provided for by us without any shortcomings.”

Regarding the difficulties detainees face during the Ramadan fast and the ban on bringing in outside food, the IPS spokesperson responded: “During the Ramadan period IPS arranges, at all facilities including Holot, to provide food, by increasing the [number of] products and flexibility in the hours of meals in accordance with the hours of the fast.”

emailemailemail
Before you go…
A lot of work goes into creating articles like the one you just read. +972 Magazine is nonprofit journalism, owned by many of our writers, editors, and journalists. In order to safeguard that independent voice, we are proud to count you, our readers, as our most important supporters. With your support, we can keep +972 Magazine a strong, independent, and sustainable force helping push the global discourse on Israel/Palestine.
DONATE
More About Oren Ziv's asylum seeker coverage 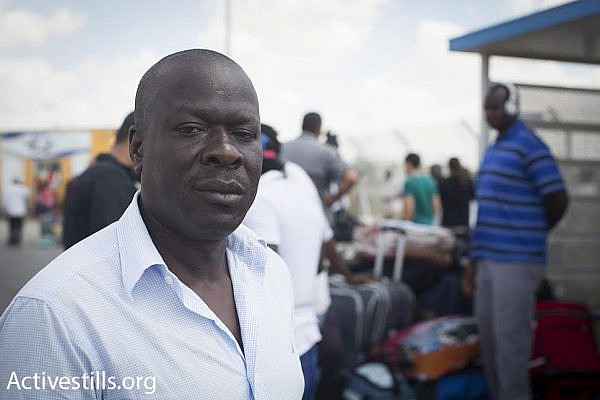 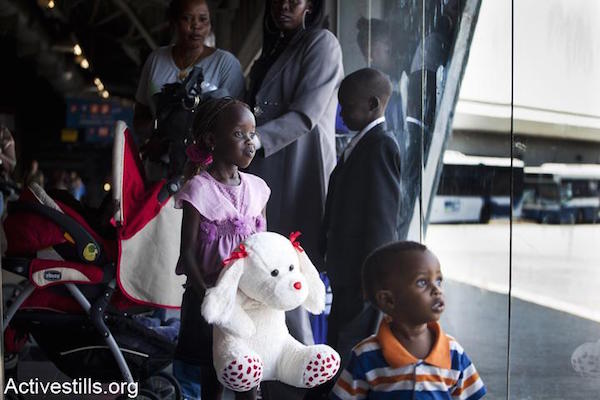 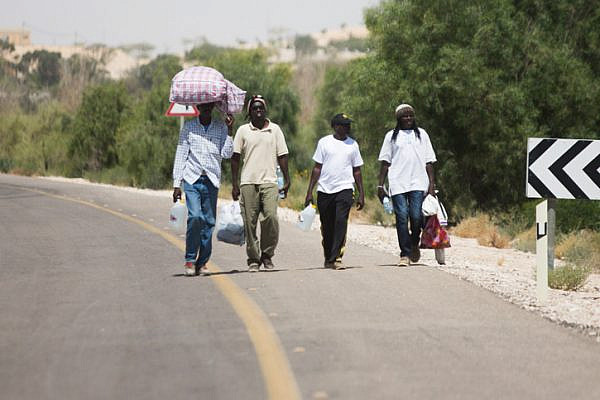