Thousands of Palestinian laborers refused to pass through a West Bank checkpoint in protest of overcrowding and bad treatment from Israeli guards. A day later, their demands were met at the privatized checkpoint, but many believe the improvements won’t last long. 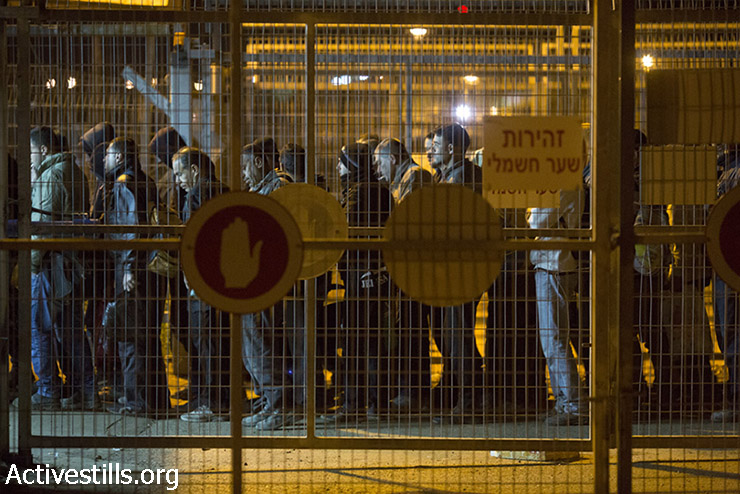 Palestinian laborers arrive at the first of eight metal carousels they must pass through in the Sha’ar Ephraim checkpoint separating the West Bank and Israel, December 22, 2014. (Oren Ziv/Activestills.org)

The Palestinian laborers passing through the “Sha’ar Ephraim” checkpoint in the early morning are a strange sight by any standard. Those passing through before dawn mostly look stressed, busy, tired and retreated into themselves. “The hour or two spent inside the checkpoint are more difficult than an entire work day,” one of the workers told me Monday morning. But that wasn’t the case on Monday.

Following a strike that took place a day earlier, in which thousands of workers from the Tulkarm, Nablus and Jenin areas decided not to cross into Israel in protest of their treatment at the checkpoint, they walked around with smiles and a sense of victory showing on their faces. They said it was as if a magic wand had been waved; their treatment inside the checkpoint suddenly improved. Inspection points were suddenly operating efficiently, and the guards were treating the elderly and women with respect — exactly as they demanded in their strike the day before.

The workers crowded outside the checkpoint — who were waiting for their employers to pick them up or for vans to take them to Tel Aviv and central Israel — were calm and appeared satisfied. “This is all because of the strike,” said one man with whom I spoke. But nobody was rushing to celebrate: “Two weeks, a month, two months — everything will go back to the way it was. Until the next strike,” said A., a resident of Jenin. Others we spoke to expressed similar sentiments.

The Palestinian laborers probably know what they’re talking about. Four or five years ago they struck for a day and refused to return. Thousands of workers lost a day’s worth of low wages in central Israel because they refused to accept the daily humiliation they were forced to endure at the checkpoint. When I spoke with them at the time they thought the improvements would be more permanent. A few years later, the laborers feel that without a strike every once in a while the situation will deteriorate all over again. To the best of my knowledge, it is the only checkpoint at which laborers organized such a strike — certainly two strikes.

“We work hard all day, arrive home in the evening, don’t see our kids, go to sleep, and at two or three in the morning wake up again in order to get in line at the checkpoint. They don’t even let us dream,” said N., a laborer from Tulkarm. Most of those whom we interviewed asked to remain anonymous. A day earlier, a Palestinian from Bethlehem who gave an interview to Israel’s Channel 1 lost his job in Jerusalem. Nobody wants to take that chance.

‘One officer plays with her hair, another gets on the phone’

The Sha’ar Ephraim checkpoint, which is between Taibe and Tulkarm, was privatized in 2006. The checkpoint is under the responsibility of the Israeli Defense Ministry, but in practice is operated by private security guards from a company called “White Snow”. There are 16 inspection points inside the terminal but the Defense Ministry only funds the operation of nine of them. The laborers claim that the security company occasionally tries to squeeze out more profit at their expense by opening only six, five or sometimes even four of the inspection points — which makes the long lines even longer. 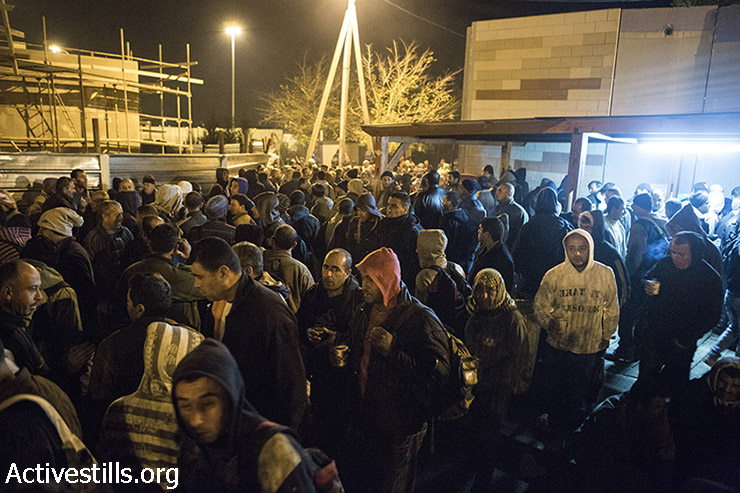 According to a number of the workers and Rachel Afek of ‘Machsom Watch,’ an Israeli organization that visits the checkpoint fairly often, even nine inspection points aren’t enough to deal with the heavy foot traffic of 6,000 to 9,000 people that pass through between four in the morning every day (the checkpoint’s opening hour) and six in the morning. Monday morning the laborers said that between nine and 12 inspection points were operating.

Some 40,000 permitted Palestinian workers enter Israel every day, according to various estimates, and another 40,000 un-permitted workers enter in other less-official ways. The laborers arrive from all over the West Bank, which is ruled in its entirety by Israel. Israeli settlers can enter and exit the West Bank without any difficulty or inspection.

“From our perspective, the problem is that everyone must pass through in a short period of time, and with that pressure comes the bad treatment from the guards,” said S., a Palestinian laborer who has entered Israel almost every day for the past 17 years. “The guards curse elderly people, arbitrarily delay people for an hour, an hour and a half — for no reason. You get to the officer and and then she decides to rearrange her hair, doesn’t speak to you, and you’re stuck. Another one gets on the phone. Suddenly, in the middle of the busiest hours, they have a shift change and everybody has to wait.”

“On Fridays [the checkpoint] only opens at five in the morning, and then the wait is even longer. When you arrive you have no way of knowing how long you’ll be there. People push each other, people are injured. On the other side, (the Palestinian side) ambulances wait and take somebody away at least once a week. A few people have died here in recent years.”

‘Striking is the only option’

Nobody organized the strike on Sunday and nobody expected it. A group of laborers who entered the checkpoint compound, somewhere in between the first two of eight metal carousels through which they must pass, got angry about the delays and spontaneously declared a strike. Thousands of laborers waiting outside joined them. Thousands of people lost a day’s wages and went home at around 7 a.m. after negotiating with representatives from the army and “White Snow,” who promised to improve the conditions.

(The last carousel at the Sha’ar Ephraim checkpoint, December 22, 2014. Video by Oren Ziv/Activstills.org)

“We don’t have a union, we don’t have a leadership, we don’t have a mother or a father to speak to them,” explains S.. “But the moment that some people decided [to strike] everyone agreed with them. And look — today we’re passing through smoothly. If every day was like this I could wake up at four or five in the morning instead of at 3:30. You know what a difference that would make?”

“Everyone joined the strike because they know that it’s the only way to apply pressure on the private company,” said N. from Tulkarm. “If we don’t go through the checkpoint they don’t make money, and therefore, when we refuse together it works very well, at least temporarily. Look, they know that nobody who passes through here wants trouble. The people who come here are laborers, with magnetic identity cards. Anyone who wants to make trouble goes around the fence, not the checkpoint. So why must they treat us this way? When you strangle people it destroys their lives and causes them to get even angrier. When they let people pass through they want to live in peace.”

“You need to remember that everyone who uses this checkpoint has gone through background checks by the Shin Bet in order to get an entry permit. Every day they undergo further checks at the checkpoint: biometric identity verification, bag searches, body searches, everything,” says Rachel Afek of Machsom Watch. “These are people who do this every day in order to make a living. Why can’t they open more inspection points? Why can’t the checkpoint be open all night long?”

It’s still dark outside as we speak to the laborers. They gather around a small cafeteria that sells coffee, tea and pastries. Some of them sit in the checkpoint’s only shelter, far too small to serve the many thousands who pass through each day. Others pray in groups, others still light small fires to stay warm. 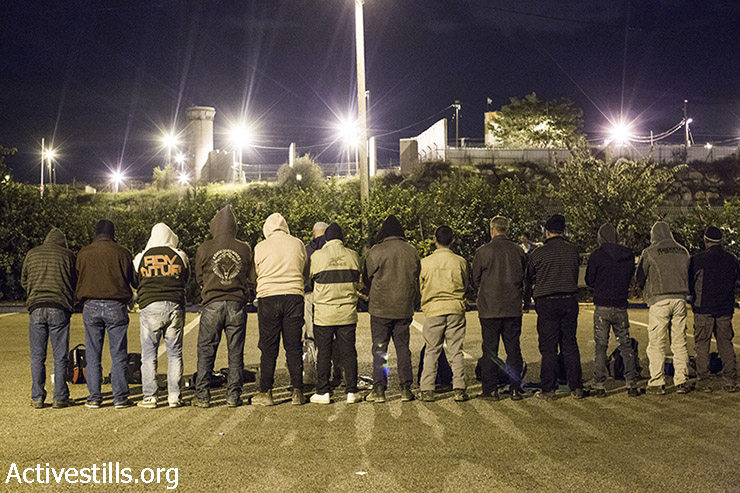 The flow of workers in the checkpoint doesn’t let up for hours, but eventually it starts to thin out. They find their transports to another day of work in Israel’s central cities. The employers don’t wait for anybody. There’s always somebody willing to take the spot of someone who doesn’t make it through. 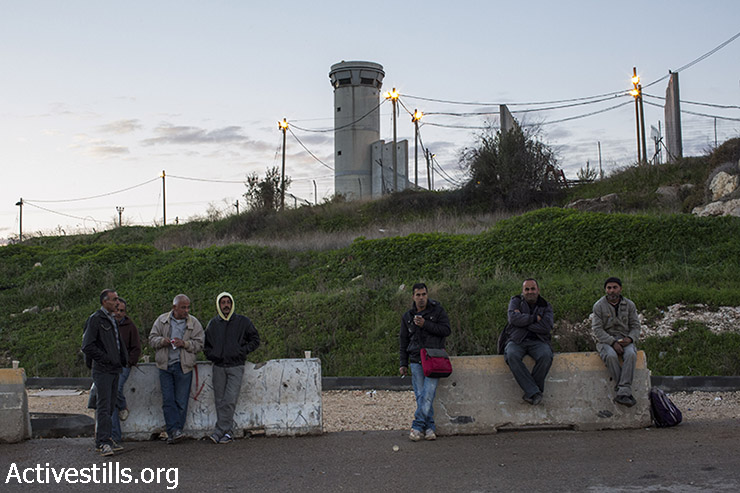 Palestinian laborers wait outside the Sha’ar Ephraim checkpoint separating the West Bank and Israel for their Israeli employers to pick them up, December 22, 2014. (Oren Ziv/Activestills.org)

Monday morning the laborers from Tulkarm, Jenin and Nablus went to work with raised heads and pride about their small victory against the establishment. The only question is how long it will last this time.

“White Snow,” the private security company that operates the checkpoint, declined to answer questions and referred us to the Defense Ministry spokesperson. The Defense Ministry hadn’t responded at the time of publication. Their response will be published here if and when we receive it.