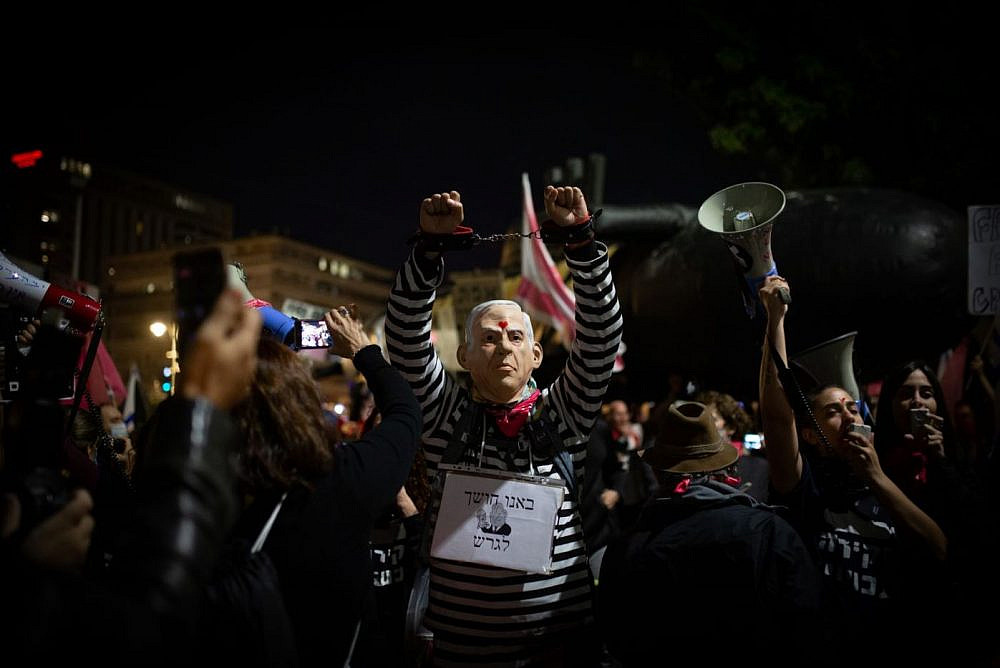 In a recent article published on +972, Meron Rapoport described the anti-Netanyahu protests of 2020 as a success. Their primary goal, he wrote, was to get rid of the prime minister, whose corruption charges and bungling of the COVID-19 crisis deemed him unfit to continue running the country. The fact that the protests had a decisive role in pressuring the government to dissolve, bringing us to another round of elections, is a sign of that achievement.

But if the “Balfour protests” won, then the left in Israel has undoubtedly lost. The upcoming elections, scheduled for March 23, will likely be a contest between various shades of nationalist, racist, and neoliberal parties — with hardly any real challenges to the right-wing’s dominance.

The endless refrain that we have heard in these protests — “anyone but Bibi” — has actually strengthened the Israeli right. If this movement is only interested in Netanyahu, then it no longer matters how criminal the alternative to his rule will be.

Under the guise of “anyone but Bibi,” Benny Gantz, who was touted as Netanyahu’s chief rival over the past two years, launched his political career by bragging about returning Gaza to the stone age. Gideon Sa’ar, who left Likud to found a new political party that mirrors Likud in all but name, boasted about how he deported more African asylum seekers than any other Israeli interior minister.

Is this what success looks like? Perhaps — if you’re not the one paying the price.

The Balfour protest movement has not tried to build new alliances that challenge the growing power of the Israeli right. Aside from several pockets of radical politics that focus on issues like racism, apartheid, climate change, and police brutality, the protests remained well within the bounds of Ashkenazi, Zionist centrism. 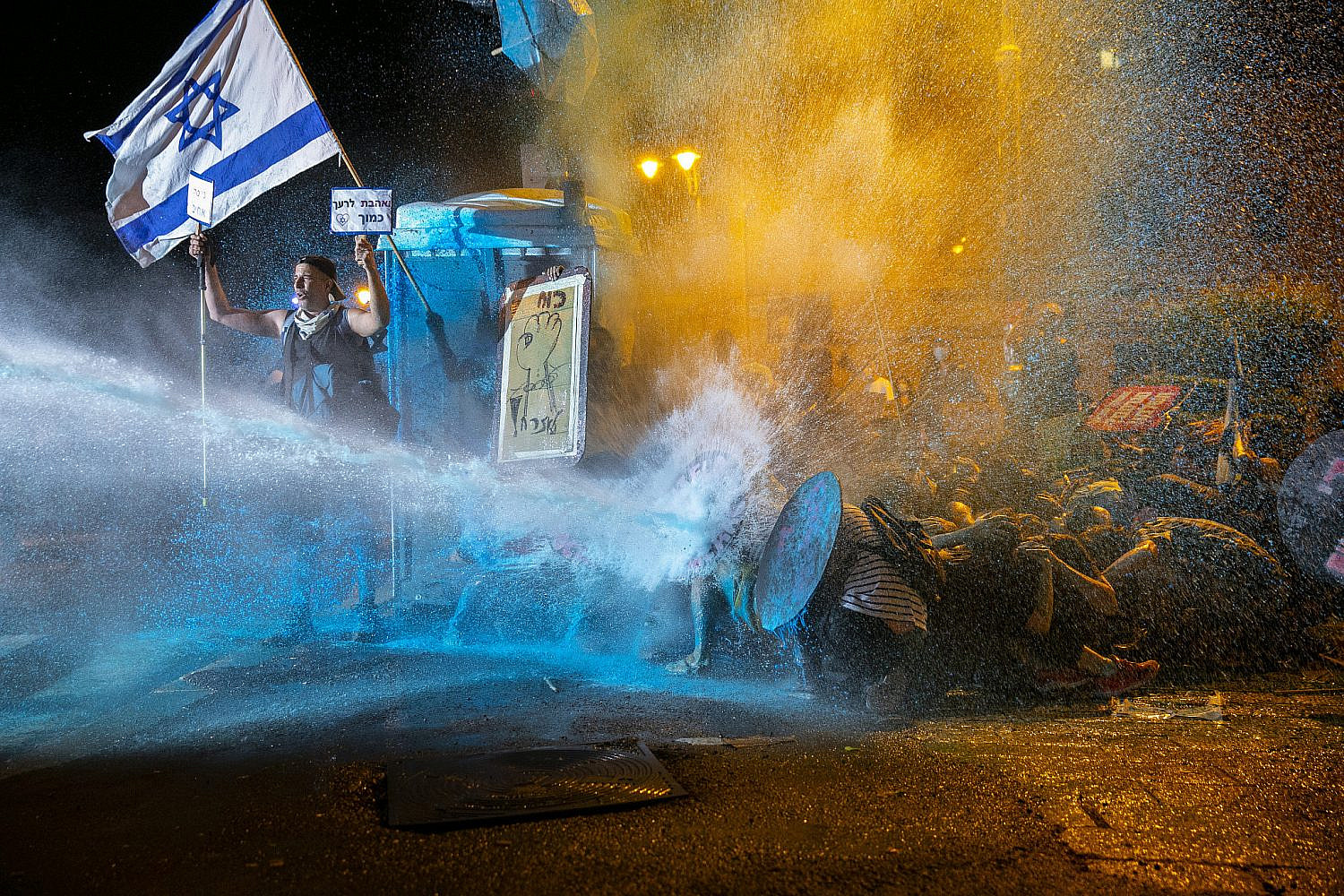 Israeli Police use a water cannon to disperse demonstrators during a protest against Prime Minister Benjamin Netanyahu outside the PM’s residence in Jerusalem, July 25, 2020. (Olivier Fitoussi/Flash90)

When the protests give center stage to veteran IDF officers and much of the crowd comes with Israeli flags, it is clear that the Palestinian public in Israel is not a target audience of the movement. For much of the Palestinian citizenry, Israeli flags and high-ranking officers are a reminder of the Nakba, land expropriations, and two decades of military government during the state’s early years.

Indeed, more than six months into the protest, the demonstrators have yet to ask themselves why Palestinian citizens of Israel, a fifth of the state’s population, are not joining their ranks. Continuing down this path will never lead to real Jewish-Arab partnership.

Even among Israeli Jews, the movement has been a failure: much of the discourse of the demonstrations has reproduced the class and ethnic power relations in Israeli society, while oppressed groups were told to fall in line with, rather than question, the worldview of the protest leaders.

For example, during an anti-Bibi demonstration outside the Prime Minister’s Residence, Amir Haskel, a former Israeli Air Force brigadier general who became one of the most prominent faces of the protests, yelled at an Ethiopian police woman: “I brought your parents from Ethiopia, aren’t you ashamed?” referring to the air force’s past involvement in bringing Ethiopian Jews to Israel. 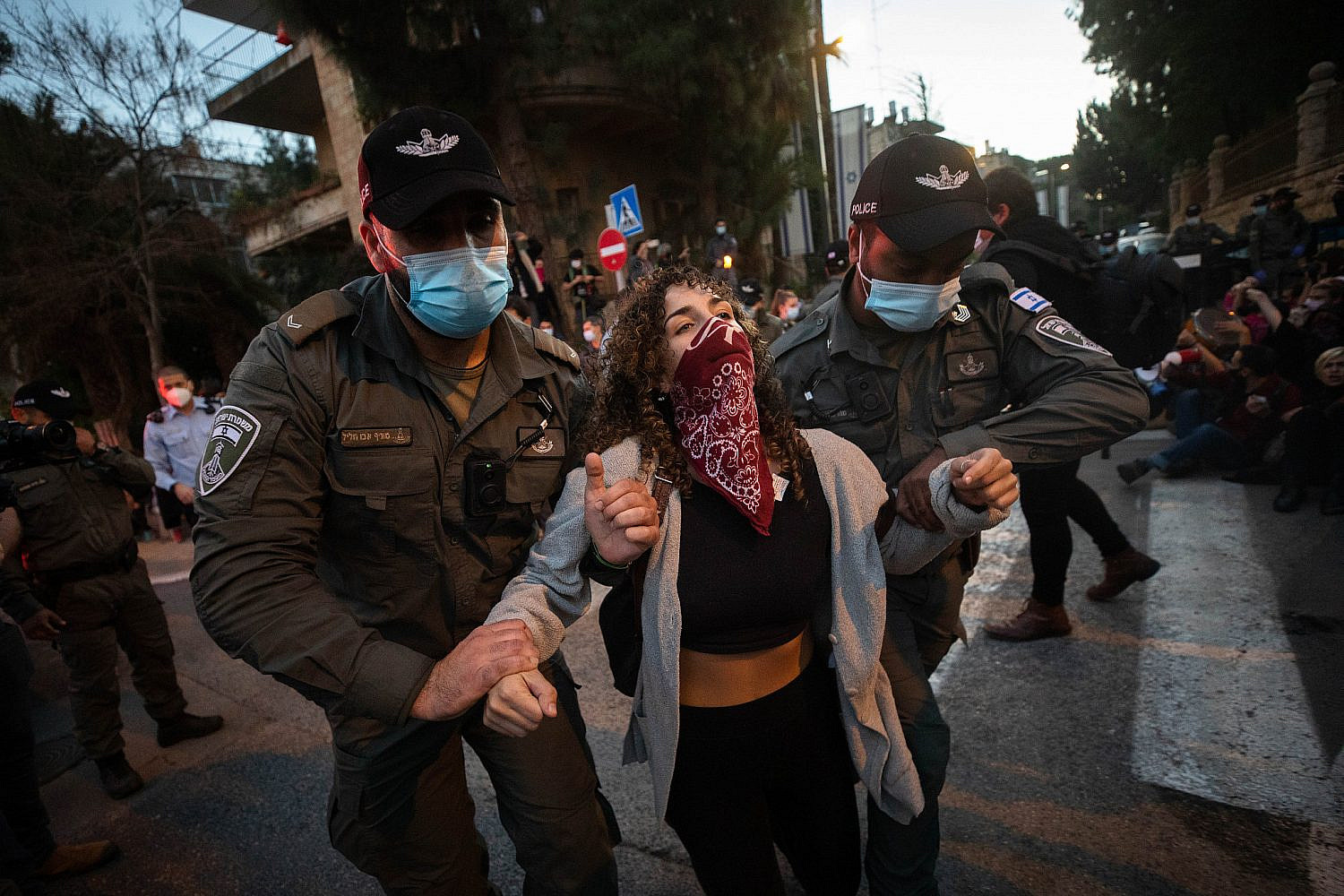 Haskel later apologized for the remarks, but the arrogance of his words are very indicative. How is the Ethiopian public, which faces overwhelming poverty and is regularly subject to police violence, supposed to join a protest movement in which one of its dominant speakers uses this kind of patronizing language?

Mizrahi and social justice activists also found themselves facing the wrath of the anti-Netanyahu protesters. When some of the activists from the Mizrahi development town of Beit She’an brought signs demanding redistributive justice — particularly that a kibbutz in northern Israel open its gates to allow all Israelis access to the Asi River that runs through it, thereby challenging Israel’s ethno-racial pyramid — they were met with racist cursing, had their signs ripped away, and were pushed out. Many of these activists stopped coming to Balfour Street.

No shortcuts through generals

Without the Palestinian public and the Jewish lower classes, there is no way to challenge the Israeli right. From Rapoport’s article, one gets the sense that this issue no longer concerns the left.

Rapoport concludes that there is much to learn from the movement, even if it ends up bringing about an even more right-wing government. This is both problematic and doubtful. Problematic, because not every protest movement that brings about a particular outcome is equivalent to a democratic success; indeed, history teaches us about many protest movements that led to disastrous outcomes. A movement that ends up strengthening figures like Gideon Sa’ar and Naftali Bennett cannot be seen as a positive development for democracy in Israel. 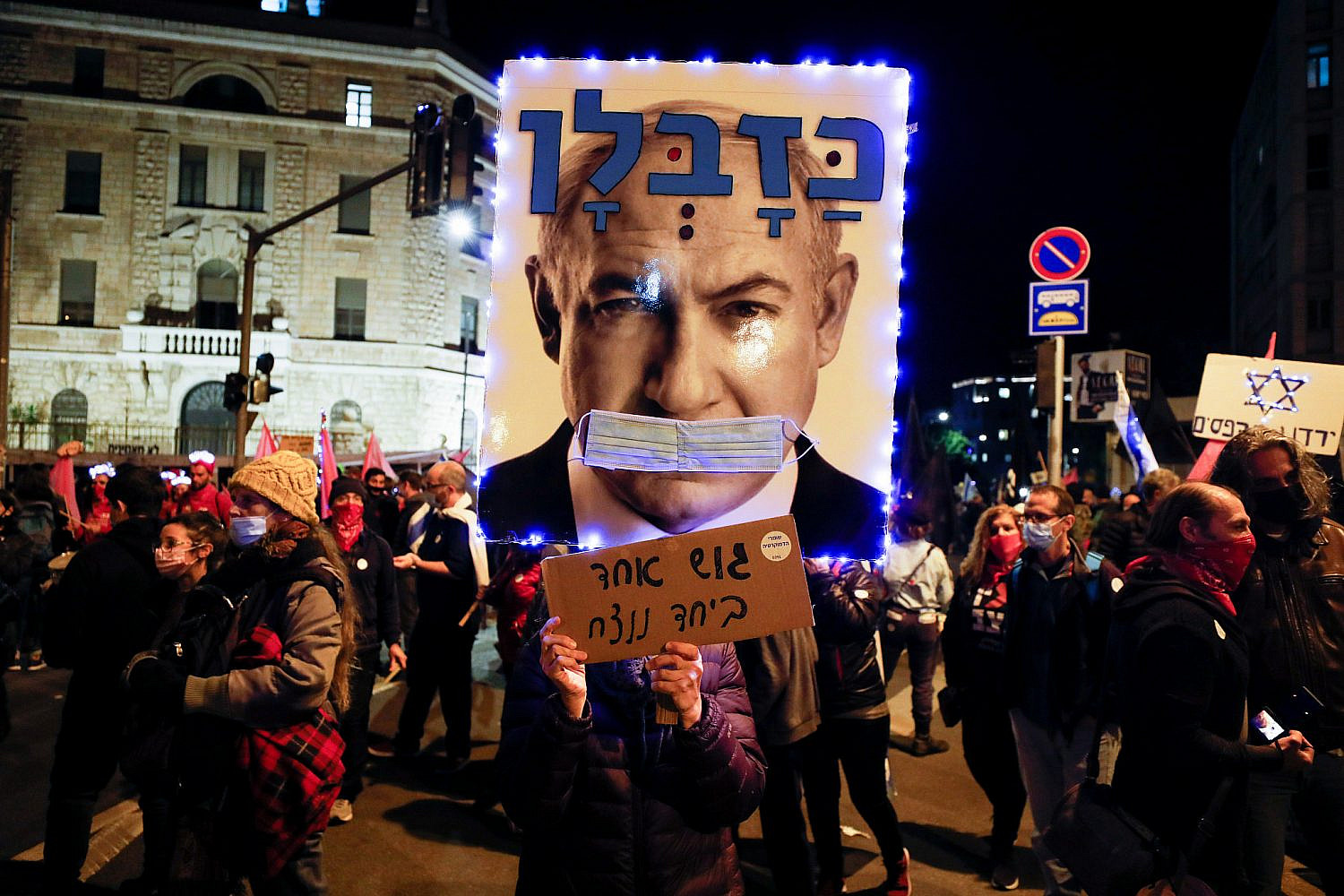 The conclusion is doubtful, because one could easily assume that Netanyahu would have taken us to a fourth election anyway in order to avoid giving Gantz the premiership, as per their rotation agreement. There are also no clear indicators that the upcoming elections will weaken the prime minister.

It is therefore incumbent upon all those who believe in democracy, freedom, and equality in Israel-Palestine to return to and think through the very basics of political action. Rather than pin our hopes on former IDF generals such as Haskel, Ehud Barak, Moshe Ya’alon, or Yair Golan, the goal of the left in Israel should be to establish a new camp — even if initially small — that is uncompromising, stable, and long-lasting.

This camp must put justice and human rights at the forefront of its agenda and work to achieve those goals. There will be no shortcuts or easy solutions in the form of army officials who seek to reproduce Israel’s power relations in gender, nationality, and class.

Politicians and leaders who oppose justice for all cannot be part of a democratic movement. On the contrary, we must view their desire to hold onto power as an inherent part of the problem, and we must challenge it. As long as the left — or whatever is left of it — continues to buy into an elitist and conservative worldview that excludes entire groups, it will never be able to pose a real threat to the rule of the right.

A version of this article first appeared in Hebrew on Haokets. Read it here.

Tom Mehager is the facilitator of Zochrot's "Nakba, Ashkenazim, and Mizrahim" workshop and a member of the Joint Nationality researcher team at the Van Leer Institute. 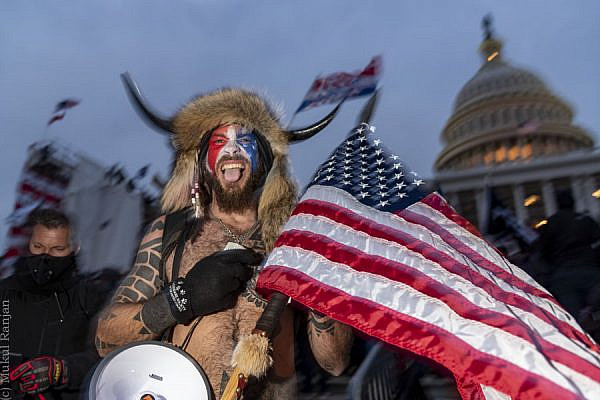 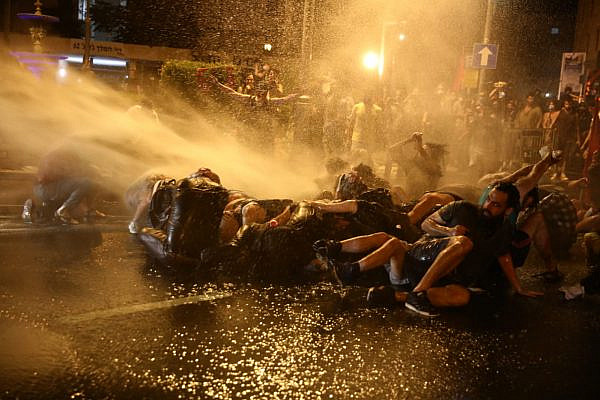