A month after Trump’s election I found myself traveling across the United States. Along the way I met with a 103-year-old Jewish journalist, who reminded me that despite the good will of American Jewry, we live in two separate worlds. 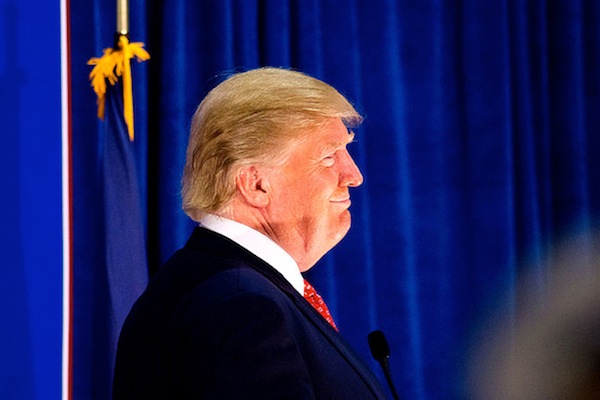 I spent 10 intense days between airports, malls, presentations, and meetings — switching between Hebrew, Arabic, English, and back to Arabic. On the last of my journey to the United States, on behalf of my village, Wahat al-Salam—Neve Shalom, I began losing a sense of time. I felt overwhelmed by the Americans I met, who were only beginning to make sense of Trump’s victory, and who were feeling anxious and helpless as they faced the future. Somehow I found myself crying in the bathroom stall in a fancy retirement home in Florida.

As I made my way to a meeting with veteran journalist Zel Lurie, I was stopped by an old woman who smiled at me and said, “Sorry that I’m stopping you, honey, but I saw you walking around and every time I saw your face I thought my daughter had come for a visit. The same height, the same hair, the same smiling face…but you are not my daughter.”

“I am not your daughter, I am here for a visit,” I responded with a heartbroken smile. She cried in that bathroom, just like I did. We stood next to one another facing the mirror, two women, me in my forties and she in her eighties. Both of us looking for a warm embrace as we faced the cruelty of the world around us.

The person accompanying me didn’t understand why I was crying. “Welcome to America,” he said. “That’s how it is here.”

“They throw your parents into an old folks home? That’s your America?” I asked. He explained that no one “throws” their parents into retirement homes, and that the elderly themselves pay for their stay there, that things are generally nice here, and that the kids spread out across the country, that it’s hard for them to “sustain their parents, you know.”

All of the caretakers at the center were black. The polite man who accompanied me looked at me and without saying anything said, “It’s not what you think! They want to work here.” Yes, sure, they want to work here out of free will. Just like you will hardly find any Jewish caretakers at retirement centers in Israel. Most of them are Arabs or foreign workers — because, of course, that’s what they want. Very quickly he admitted that he had no chance of beating me in an argument over this point, not because I am a better debater, but because I was right.

Israel in the middle

Zel Lurie was one of the first people to donate to Wahat al-Salam—Neve Shalom and its binational school. In honor of his 103rd birthday, the board of directors decided to organize a gathering in his honor at the retirement center where he lives. 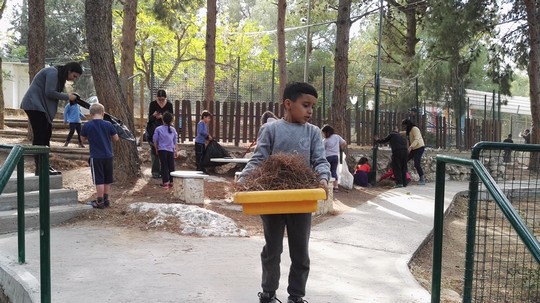 Students from Neve Shalom-Wahat al-Salam clean up the school grounds following a wildfire in the Jewish-Arab village. (Lindsay Stanek)

Lurie was born to a Jewish family in New York in 1913. He witnessed two World Wars, major economic collapses, the Nakba of the Palestinian people, the establishment of the State of Israel, various peace agreements, and many wars. In 1935 he began writing for the Palestine Post, which would eventually become the Jerusalem Post; today he is disappointed by the direction the newspaper has taken in recent years. He has lost nearly all of his eyesight, can barely hear, and speaks slowly and with much difficulty. His assistant reads him the news and opinion pieces on a daily basis, including my articles published on +972.

He was very excited to learn that he is sitting with someone who could write an article about our conversation. “I cannot write anymore, so you write now,” he told me. He is truly addicted to this, I thought as I tried to explain the concept of writing articles for free. I don’t think he understood the concept.

At a fancy dinner held at the end of the day, the board of directors sat around the table and shared stories from the life of a man I had never met before. Throughout my journey I took part in countless heated arguments over Zionism as a racist movement, which contradicts the very principles of democracy that Americans worship. Over those 10 days I used all the English I knew for long discussions on my story, the history and story of the Palestinian people, refugee camps, Gaza, a shared fate of the people in Israel-Palestine, and the crisis of the Left. And suddenly, after I had criticized Zionism from every angle, I found myself celebrating the birthday of a diehard Zionist. Not only that: I found that I wasn’t as angry at him as I expected, even laughing at the fact that he was born on the same day as the Balfour Declaration.

One of the celebrants told that one time he asked Lurie whether he thinks it’s possible to “bring back the hope for peace.” Lurie responded, “Sweetheart, I am 95! I don’t need hope. You do.” During the dinner Zel sat between me and my friend. He heard stories of a young Palestinian who was born in Yemen to a man who was the leader of the Popular Front for the Liberation of Palestine in Gaza, who was expelled from Cairo by Nasser and returned to Gaza during the Sadat years, and whose brother was one of the leaders of the First Intifada.

One his other side was me, a Palestinian from a family of refugees from the village Sajara in the north, who is trying to struggle for Arab women and a shared fate for all living in Israel-Palestine in a state he loves so much — one that does not care for my people. The veteran journalist listened like a small child entranced by fascinating stories and only wants to hear more. When we finished, he spoke: “So I have the Gaza Strip to my right, and Samah is the West Bank to my left, and I’m like Israel — stuck in the middle!” “Watch your metaphors, grandpa,” I responded. “We are two young, opinionated women and you are 103 years old stuck in the middle, you don’t know how this might end.” The entire room erupted in laughter.

At the end of the event Zel invited me to meet him for lunch the following day before my flight to New York. He wanted to hear my thoughts about Democratic Jews in the United States. Of course I came. Trump had won and I could say whatever I wanted about American Jewry. When we met he wanted to hear my life story, about my family and its history, about the village from which we were expelled, about our parents and grandmothers and children. Everything. I told him that my grandmother was buried in the city of Tur’an in northern Israel, but that she was wrapped in soil and stones from our village, according to her will. 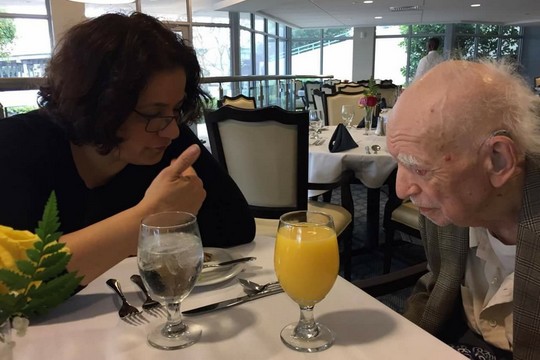 He tried to explain to me what American Jews think about Israel and Palestine, pointing at the houses dotting the shore of the lake before us. “Everyone is Jewish here, but no one cares about the Middle East anymore,” he declared.

“They have grown tired of it?” I asked.

“It’s not a matter of hope and despair. They were never interested in it. Most of the Jews here don’t care what’s happening over there. Those who were already involved have only become more involved and extreme, that’s all.”

And what about Netanyahu? How will we find a leadership that can replace him, I asked.

“Find yourself another Bibi. Build leadership, on both sides. It’s not as hard as you think — people want to be led, and not everyone has an opinion. I parted ways with Lurie, wishing him many more birthday parties.

News that Ahlam Abbas-Ziyadat had been murdered by her husband, who had staged a kidnapping in the West Bank, reached me as I returned to my hotel to pack up and head for the Big Apple.

I shared a video (above) in which Ahlam’s mother describes a single year in the life of the 21 year old. A year of a cruel marriage to a violent, abusive man. Ahlam (Arabic for “dreams”) was attacked when she was 15 by one of her uncles, who dumped acid on her. The life of one woman have included the horrors and oppression of an entire village. The life of a poor family, a single mother, exploitation, threats, bullying, and violence against women. And all this in the face of a systematic failure by the police, the legal system, and the welfare authorities to do their job in these situations.

On one side of the world, the long painful journey of one young women came to an end, alongside all of her dreams. All while an elderly Jewish man still dreams of a different future in Florida.