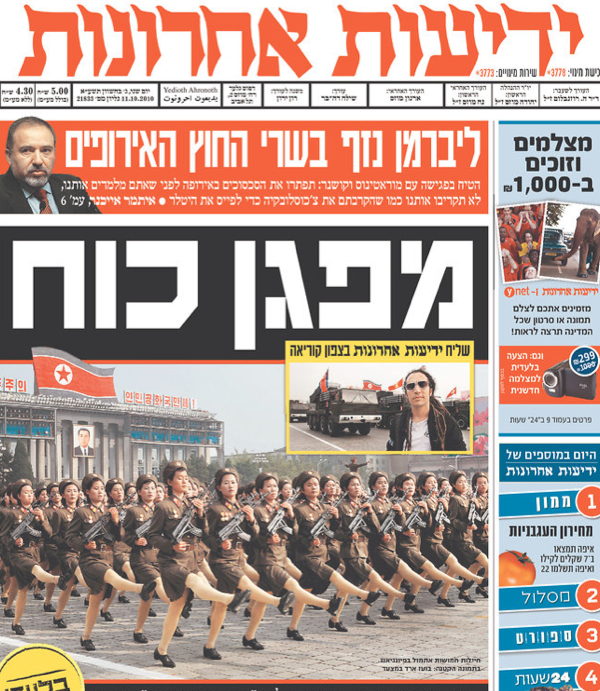 The Headlines: Heading in the wrong direction, fast

> Israelis will soon be allowed to accelerate to 11o kph on some highways. But where will they be going?

> One indication could be the government’s endorsement of a law requiring non-Jewish new citizens to declare loyalty to Israel as a “Jewish and Democratic” state. Some ministers are already planning a law revoking citizenship from those convicted of “’disloyalty”, or requiring all 16-year olds to sign a loyalty oath, if they want to get their ID cards. On the margins, the bizarre machinations of Defense Minister Ehud Barak over this law (he voted against it after his amendment was rejected) may be the final straw that will cost him the leadership of the Labor party (Ma’ariv). Well, to quote Barak himself, in the Middle East, there is no place for the weak (Yedioth).

> Perhaps brilliant diplomacy abroad can compensate for the ugliness of racism at home? Foreign Minister Avigdor Lieberman (Yisrael Beitenu) tells European foreign ministers to solve their own continent’s problems before voicing an opinion on ours. He also explains to them that Israel will not go the way of Czechoslovakia in 1938. They had good diplomats, and look what happened to them!

> F0r some reason, Yedioth thinks a military parade in North Korea is not just front page news, but should take up nearly the entire front page. Why are Israelis so fascinated with a militarized, paranoid state, with nuclear weapons, fortified borders and explosive relations with most neighbors, recently accused of piracy on the high seas, and propped up by a great power, that will support it financially and in the UN no matter what it does?

The Sidelines: The perils of a liberal education

> Israel’s dorms are [Heb] meager, expensive and of poor quality.

> Palestinian high-school students are allowed to study from a book that shows both sides’ view of the conflict. Israeli students are not.

> The extreme right-wing MK, Danny Dannon (Likud) is cynically using his position as chair of the children’s rights committee to hold a hearing on the cynical use of Palestinian children to throw rocks in East Jerusalem (Ma’ariv).

> An East Jerusalem neighborhood, which was left on the Palestinian side of the separation wall, receives little municipal services from the Israeli mayoralty of Jerusalem, to which it nominally belongs.

> Shas takes a strong public stand against the settlement freeze, but it will probably not be the one to foil it, if it comes to that.

> The new treasurer of the Civil Administration (the IDF unit in charge of running the Occupied Territories under Israeli control) has been suspended because she lives in an illegal outpost, partially built on private Palestinian land (Ha’aretz).

> The Palestinian olive harvest is beset, as usual, with settler attacks.

> A right-wing radio station invites listeners to send their own conspiracy theories regarding the murder of Prime Minister Rabin (Labor), assassinated in 1995 by a right-wing gunman over his participation in the Oslo peace process (Ma’ariv).

> Ireland will not purchase bullets from Israel, because of the use of forged Irish passports by Mossad agents during the assassination of a Hamas terrorist in Dubai (Ma’ariv).

> The head of Israel’s central bank has been crowned the “best central banker in the world” (Yisrael Hayom).

The Bottom Lines: Migrants and women at risk

> Israel suffers from a workers’ shortage in several lines of work, but it has to bring in migrant workers because pay is too low and the jobs are insecure (Yisrael Hayom). What happens to migrants when they come here? Well, reports indicate that the children of illegal migrant workers will be deported even if they are only a few days younger than the threshold mandated by the government.

> Ha’aretz’s supplement covers the travails of a single working mom, seeking support for her three children. Might things be improving? A government program will attempt to address the problems of poor women at risk, including single moms, as well as battered wives and prostitutes. (Ma’ariv)

emailemail
Before you go…
A lot of work goes into creating articles like the one you just read. +972 Magazine is nonprofit journalism, owned by many of our writers, editors, and journalists. In order to safeguard that independent voice, we are proud to count you, our readers, as our most important supporters. With your support, we can keep +972 Magazine a strong, independent, and sustainable force helping push the global discourse on Israel/Palestine.
DONATE
More About ehud barak