Joining Bil’in’s weekly demonstration against the wall after not attending for a while exposes the little differences in the routine of occupation and resistance.

It’s been a couple of months since my last visit to Bil’in. Not too long, but long enough to suddenly notice those small changes that occur in every living environment, the changes that people can sometimes miss if you’re watching from within.

It started on the way from Tel Aviv. Passing by the settlement of Hashmonaim I was surprised to suddenly realize that there was one less fence in sight – and this in a region where fences and walls tend to multiply, not disappear. The fence in question used to separate olive groves belonging to the nearby village of Ni’ilin from the main highway that serves mostly settlers. After several years of construction, the separation wall in Ni’ilin has been completed and these groves are now unreachable for most villagers; someone must have realized that the fence was no longer needed to protect the highway. The view, naturally, is much nicer when not seen through a metal net, but realizing that the rational behind its removal was linking Palestinian land to settler roads and continuing its detachment from the village made things a bit grimmer. 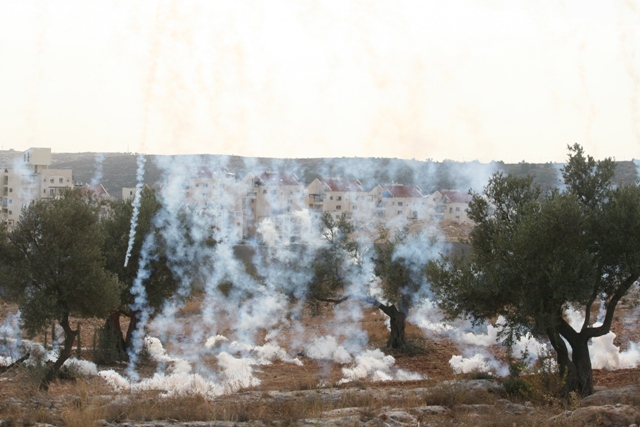 Next we got to the Ni’ilin checkpoint, or I should say, the place formally known as Ni’ilin checkpoint. Apparently, the entire army base that comprised the checkpoint was recently privatized and is now run by a security company (the name of which was nowhere to be found) and its name changed to the much easier-on-the-ear, “Hashmonaim Crossing.” Not a border crossing, mind you, as it isn’t located on the internationally recognized border and there are still settlers and the army on the other side of it. It’s just a “crossing.” 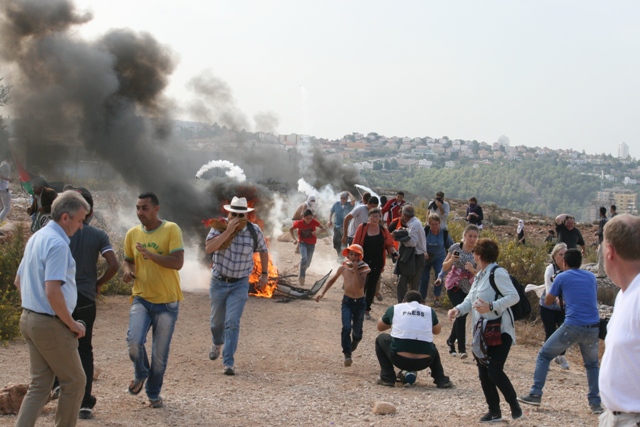 And then on to Bil’in. This week’s protest was dedicated to Yasser Arafat, following findings earlier in the week that indicate the possibility the former PLO leader was poisoned to death. About 200 Palestinians, Israeli and international activists drove together almost as far as the wall, going the last kilometer or so on foot.

Nearing the wall I noticed how lively the earth around me seemed to be. After several years during which access to this part of the village’s agricultural land had been prohibited, villagers have been working hard to bring it back to life and the results are starting to show. New olive trees are taking root, a new vineyard has been planted, several huts serving farmers while they work the fields have been built and a new football field was flattened near the recreational forest “Abu Lemon,” just at the foot of the wall. Resistance through the reclaiming of land. 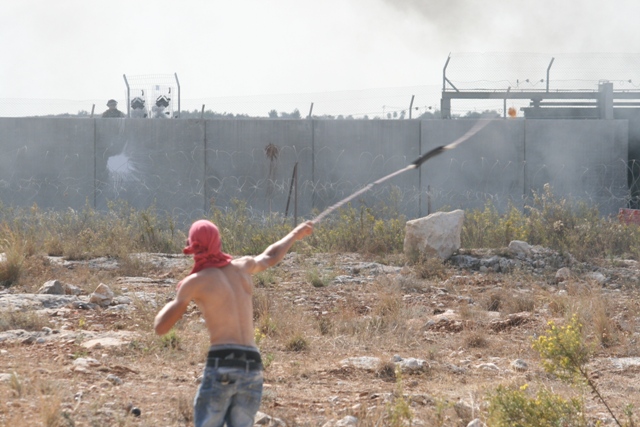 The soldiers were quick to open fire on the demonstration but seeing as the wind was working against them, their tear gas had little effect. After about two hours of protest, with the occasional dodging of another tear gas canister (or a dozen) and with several local youth throwing stones at the soldiers behind the wall, we made our way back to the village.

Last week things were not this easy. Activists reported that three demonstrators were wounded from rubber-coated metal bullets, and a fourth from live, 0.22mm bullets, which the IDF itself has said is illegal for use as a means of crowd control.

On the route of the old fence, which was taken down on orders from the High Court, a monument for local martyr Bassem Abu Rahme has grown. Bassem’s family members gathered dozens of spent tear gas canisters, not dissimilar to the one that killed him four and a half years ago, and planted flowers inside them, turning the monument into what might possibly be the world’s first tear gas canister garden. The local popular committee added a large metal sign telling Bassem’s story. It is now a touching, humane and beautiful spot in the rocky terrain which is the heart of the West Bank. 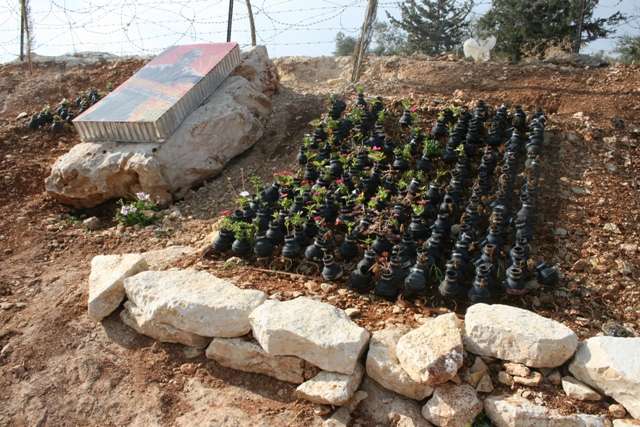 Demonstrations have been taking place in Bil’in at least once a week for nearly nine years now. Two have been killed and countless wounded or arrested so far, but strong political alliances and friendships were also struck here. And as settlements expand, a checkpoint is privatized and land regained, the occupation is still omnipresent and it doesn’t seem to be going anywhere. Bil’in’s struggle, it would seem, will have to continue into its tenth year.

emailemailemail
Before you go…
A lot of work goes into creating articles like the one you just read. +972 Magazine is nonprofit journalism, owned by many of our writers, editors, and journalists. In order to safeguard that independent voice, we are proud to count you, our readers, as our most important supporters. With your support, we can keep +972 Magazine a strong, independent, and sustainable force helping push the global discourse on Israel/Palestine.
DONATE
More About Activism