It’s always so nice to come home to Israel. It was a successful trip away; I fell in love with my new nephew, and I gained some deep insights into my American Jewish community, caught up with family and friends.

After a freezing few weeks, I was thrilled to catch the last of the soft gray rainstorms of Tel Aviv, which are more cozy than they are cold. In fact, spring has almost arrived. And among the joys of coming home was that first beautiful jog along the sea.

The broken running paths of Tel Aviv have been marvelously renovated in recent years, stretching south to the Old Jaffa port, which has also been rebuilt. It has a sleek and understated grace, with nostalgic wooden floor planks (soft for runners), flanked by low hangars of steel and glass, hosting hip, creative art exhibits.

Round the old fishing depots that coexist with the tony nightclubs, through a small parking lot, and the running trail picks up again. Here the path is brand new, an elegantly curved line tracing manicured slopes of grass, with spot-lighting from the ground for the dusk-runners like me. Pale beams of setting winter sun lit up the bottom of the rain clouds as I ran, making the water glow, and my heart ached imagining what Turner would have done with that horizon.

J.M.W.Turner: The Fighting Téméraire tugged to her last Berth to be broken (Photo: Wikipedia, copyright expired)

Inspired, I began to dream of running the Tel Aviv marathon in five weeks, and these thoughts, together with the breathtaking nightfall over Jaffa, kept me going for around 15 km.

Today, I read this arresting opening paragraph in Haaretz:

Gaza runner Bahaa al-Farra treads carefully, braving the elements and potholed roads ravaged by years of conflict between Palestinian militants and the Israeli army, as he prepares to race at the London Olympics.

I wanted to shake this article from my personal horizon. Please, just keep my running pristine, it’s about the only thing still not tainted with the pain of politics.

But the article’s frank almost feel-good tale, devoid of political manipulation, was unrelenting for me. An unassuming paragraph close to the end read:

Abu Maraheel [Farra’s coach, ds] treasures the trainers he wore in Atlanta and says he rescued them along with other trophies and mementos when his home was hit during Operation Cast Lead three years ago. “The house was hit … and we escaped, but I made sure I took the shoes with me”, he said.

How can I run now? How can I run to the horizon with rhythmic long-distance bliss, when this person had to salvage his shoes from a house bombed in a conflict with us? How can I outrun my cares towards daily freedom, when my country blackens their daily lives?

Someone is sure to dismiss this as sentimental, bleeding-heart guilt. So be it. Someone else is sure to say but there are so many other dire problems right here inside Israel – why the obsession with the occupation that can’t be solved? Yes, Israel has its problems. But Israel is inflicting this systematic political stranglehold on others and therefore I do have to think, always, about how to solve it. So how?

I wondered if I should boycott the marathon as a statement. But I realized that no one would listen. And here’s the truth: I couldn’t stand to sacrifice this personal pleasure, a slice of joy within long days of work. Quickly, I found my own justification and I believe it too: sitting out the marathon would have denied myself something that gives me personal strength to undertake my professional and political activity.

Once, my friend Sari Bashi (who, unlike me, is a serious runner – of ultra-marathons – and a human rights lawyer defending Palestinian freedom of movement), and I got the idea of holding a Peace Marathon along the pristine Gaza coastline, about 41 kilometers (25 miles) long. It was only a year or two ago, but the climate here is far too bitter and non-peaceful to imagine that now.

No, this year’s Tel Aviv marathon won’t become the next victim of boycott nor a personal statement of non-normalization of Israeli life. At best it will give me (and at least one other +972 colleague) a boost of energy to keep our spirits up as we make ourselves ever-more unpopular by criticizing what we think is wrong.

But I’ll be thinking before, during and after the race, about effective ways to renovate Israel’s broken paths, straighten its crooked timber.

And I’ll think of 19-year old Bahaa al Farra making the Olympics  – an international arena of political protest – for the political statement, and for the medal. 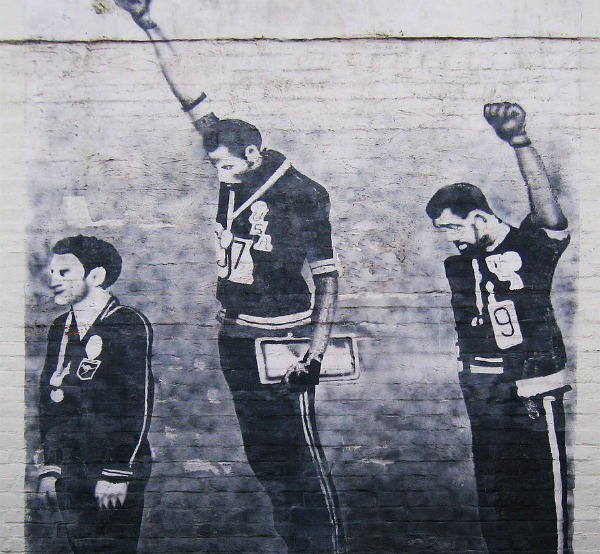