Wafaa takes me back to the pile of rubble, but this time, not to show me the destruction. She points to a small shrub at the rubble’s edge, battered, but clearly alive. ‘Ibrahim’s tree,’ she says of the living reminder of her son. 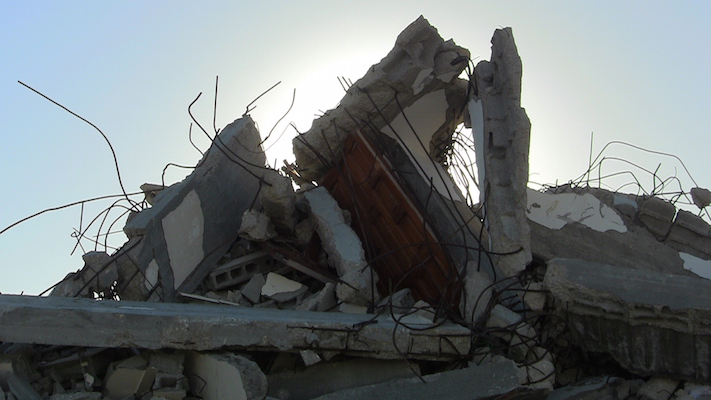 The Awajah family home was destroyed in the 2009 Gaza war, rebuilt and destroyed again in the 2014 war. (Photo by Jen Marlowe)

Wafaa Awajah’s family had scarcely taken their seats in a circle of plastic chairs when her brother hitched up his pants to show me the scars on his leg from where he had been injured by an Israeli soldier. Another brother had also sustained injuries from the army; he, too, showed me his wounds. As Wafaa passed around a tray of chilled soft drinks and bowls of nuts and sweets (as is customary during the Eid celebration) a third brother told me of how years ago a settler had hit him with his car–intentionally, he believed–as he was riding his bike on the side of road. A fourth brother had been imprisoned on two occasions, not by the Israeli army, but by Hamas. “For speaking too much,” he told me with a grin, when I asked him why.

I had arrived to the caravans where the Awajah family now lives in Beit Lahiya, Gaza a few hours earlier, in the midst of the flurry of excitement accompanying the preparation for Eid il-Fitr, the three-day holiday marking the end of Ramadan. The children were running around, brushing their hair, putting on their new Eid clothes. Meters away from us was the rubble of their home, destroyed in the 2009 war, finally rebuilt in 2013, and destroyed again in the 2014 war.

The two days I spent with the family were joyful, yet still penetrated by the horror that this family (and so many families in Gaza) have experienced. Little Ibrahim, at the age of three, is obsessed with playing Hamas and soldiers. “Hold the fire! Hold the fire!” his battery operated toy gun barks in scratchy English as the little boy crouches in the sand, taking aim at imaginary Israeli soldiers. His sister pointed to the small statue mounted on the toy gun; it was a soldier in a tank. “That’s the Israelis, not Hamas,” she said. “Only the Israelis have those weapons.” But Ibrahim stubbornly insisted that, tank or no tank, he and his gun were Hamas.

That afternoon, 17-year-old Omsiyat and 13-year-old Hala and I lay on a mattress atop the rubble of their home. The caravans were stifling but here, under a cloth canopy, the breeze eased some of the punishing heat. I wished, not for the first time, that my Arabic was better. I was able to get the gist of what Omsiyat and Hala were telling me, pointing out which section of the rubble represented their bedroom, what their experiences had been during the war, what they think will happen in the future… but so many important details were lost in my lack of Arabic fluency. I don’t know how often these girls process their experiences about the war aloud. I don’t know if there was some benefit to them of vocalizing it, regardless of whether or not I could understand all of it.

“Do you have the film of me crying on top of the wreckage of the home? Can I see it?” Wafaa asked me later that evening. I plugged in my external drive with the footage I had shot six months earlier, when Wafaa had first led me on top of the rubble of their home. 7-year-old Zikriyat sat on her mother’s lap as we watched the unedited footage together. I wasn’t sure how much Zikriyat was understanding of what her mother was saying on the video, words expressing despair and hopelessness. But when Wafaa (on the video) began to cry, Zikriyat burst into tears and buried her face in her mother’s lap. Moments later, Zikriyat pushed herself out of her mother’s arms and ran into the caravan, unable to watch or to hear anymore. “It was because I was crying,” Wafaa said. Wafaa almost never cried; Zikriyat may have never seen her mother’s tears before.

Wafaa took me back to the pile of rubble, but this time, not to show me the destruction. She pointed to a small shrub at the rubble’s edge, battered, but clearly alive. “Ibrahim’s tree,” she said to me. “I couldn’t believe it when Sobhi (her eldest son) found it, after we had cleared away some of the rubble.” 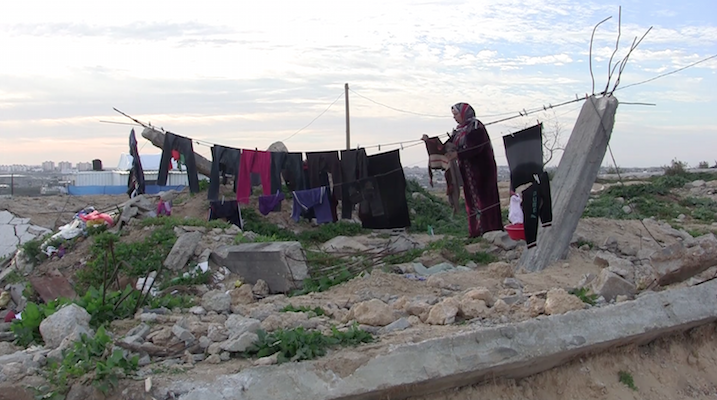 Wafaa Awajah hangs laundry from rubble on what was once her family home, destroyed during the 2014 war. (Photo by Jen Marlowe)

The olive tree had been planted by Awajah’s son Ibrahim, who would have been 15 years now old had he not been shot and killed by an Israeli soldier during the 2009 Gaza assault. (Three-year-old Ibrahim, born in 2011, was named for his brother.) The family had taken shelter under this tree when their first home was destroyed, just hours before the first Ibrahim was killed. When they rebuilt the home, they made sure that Ibrahim’s tree would be exactly next to it. A few days into the 2014 war, the family fled the dangerous border-area in which they lived, and took shelter in Gaza City. They returned at the war’s end, only to find their newly rebuilt home completely demolished. “When I was looking around the rubble, I went to Ibrahim’s tree. When I did not see it, something from inside me fell on the ground,” Wafaa told me on the video 6 months ago. “This is a memory, I left it for Ibrahim. It wasn’t there anymore, they disconnected any tie to Ibrahim with this area.”

But, as the family discovered only recently, a small piece of the tree had survived the demolition, and, though trapped under the rubble for almost a year, had still survived. The physical connection between the Awajah’s slain son and his home had not been totally severed after all. 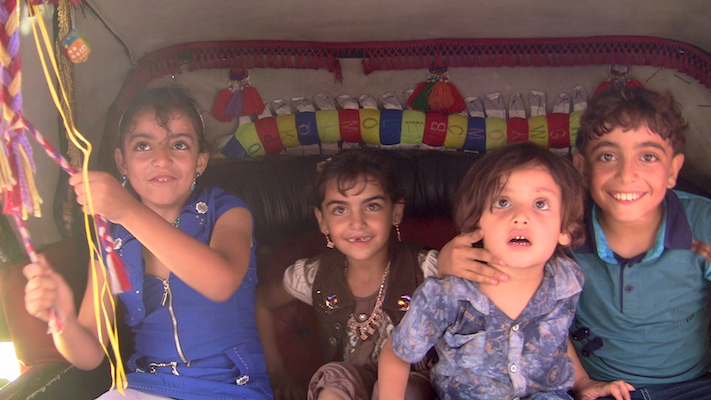 The Awajah chlldren enjoying a horse-and-buggy ride in Gaza City to celebrate the Eid holiday. (Photo by Jen Marlowe)

The next day, Kamal (the father) took the kids and me to a restaurant in Gaza city to celebrate the 2nd day of the Eid, and then to the Unknown Soldier park in the center of Gaza City. There were children’s rides at the park, rickety and precarious, but rides nonetheless. The younger Awajah kids scrambled up on swings that (via manual power) circled around, and then rode on toy trains, and danced and sang during a horse-and-buggy ride we all took together around the perimeter of the park.

Kamal smiled to see his kids happy, playing. “You see? Ibrahim has forgotten all about Hamas and the Israelis,” he said to me with relief, watching his three-year old laugh and kick his legs gleefully as the swing lifted him in the air and carried him around in a circle.

Jen Marlowe is the Communications Associate for Just Vision and an independent filmmaker, journalist, author, and human rights activist. She is the author of “The Hour of Sunlight: One Palestinian’s Journey from Prisoner to Peacemaker” and made the short award-winning film “One Family in Gaza.” Follow her on Twitter: @donkeysaddleorg.