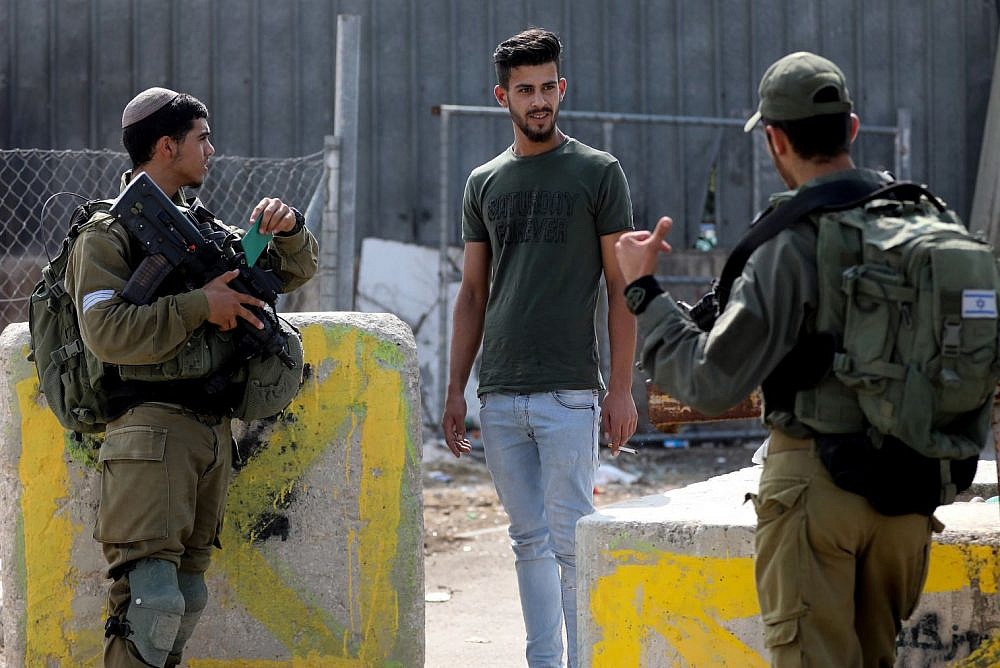 Years ago, a Palestinian based in Ramallah — let’s call him “Ahmad” — scheduled a visa interview at the U.S. consulate in Jerusalem.

An avid runner, Ahmad wanted to travel to the United States to participate in a major marathon. But in order to attend his interview, he needed an Israeli-issued permit to enter occupied East Jerusalem. Had it not been for Israel’s military checkpoints and separation wall, the consulate would have been only a few minutes’ drive away from his home.

Sadly, Ahmad’s permit request was denied by the Israeli authorities. So, another friend, who we’ll call “Tamer,” decided to help him out — with a bit of a cheeky plan.

On the day of the interview, Tamer washed his car, picked up Ahmad and another friend — a female foreigner we’ll call “Maria” — and drove to the Hizma checkpoint just outside Jerusalem. As they had orchestrated, Maria sat in the front seat next to Tamer, wearing a tank top and with her blonde hair down, while Ahmad sat quietly in the back.

As they approached the checkpoint, Tamer smiled at the Israeli soldier standing guard and waved his hand confidently, as if he were greeting a neighbor. He could hear Ahmad behind him anxiously reciting as many prayers as he could under his breath.

The soldier took one glance at the passengers and, instead of stopping them to check their IDs, waved the car through. 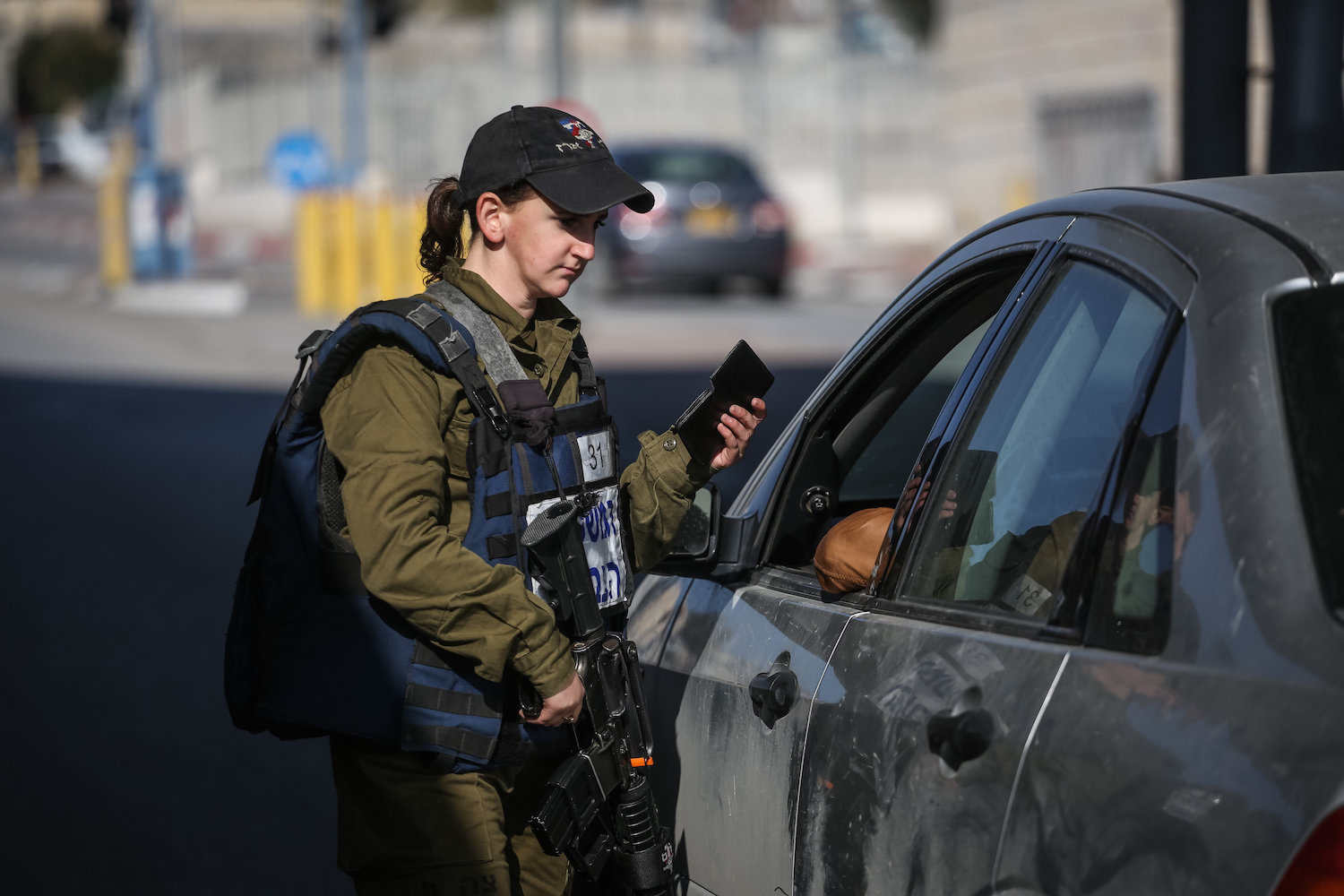 An Israeli soldier checks IDs of Palestinians at the Shu’fat Refugee Camp checkpoint in East Jerusalem, on December 22, 2015. (Hadas Parush/Flash90)

Ahmad would eventually receive his U.S. visa and, later that year, he completed his race in excellent form and even qualified for another major marathon. His friends were thrilled for him, but they were also pleased that they had found a way to trick the checkpoint system: by using Israelis’ own racism against them.

Not all Palestinians have the “privilege” to cross an Israeli checkpoint to enter occupied East Jerusalem or Israel. Indeed, many have never been to the “other side” because they were never granted a permit or even a chance to request a permit. Some 2 million Palestinians in Gaza, for example, who have been under siege since 2007, are barred from leaving the strip, including to other parts of the occupied territories, except in exceptional humanitarian circumstances.

The Palestinians with the most mobility across the so-called “Green Line” are those holding Israeli citizenship with blue IDs, and those with East Jerusalem residency and red IDs. While making their trips from the West Bank into Israel, these Palestinians have two options: either cross through airport terminal-style checkpoints or use what are called “bypass” checkpoints.

The airport-style checkpoints feature both pedestrian and car lanes. Palestinians from the West Bank with permits are only allowed to cross into Israel through these checkpoints. The car lanes are usually slow and busy, but they are the only option if Palestinians holding different IDs are traveling in the same car. For example, if you had a Palestinian couple in which one person held a Jerusalem residency, and the other a West Bank ID with a permit, the latter would have to cross alone by foot while the former would remain in the car and meet their partner on the other side. 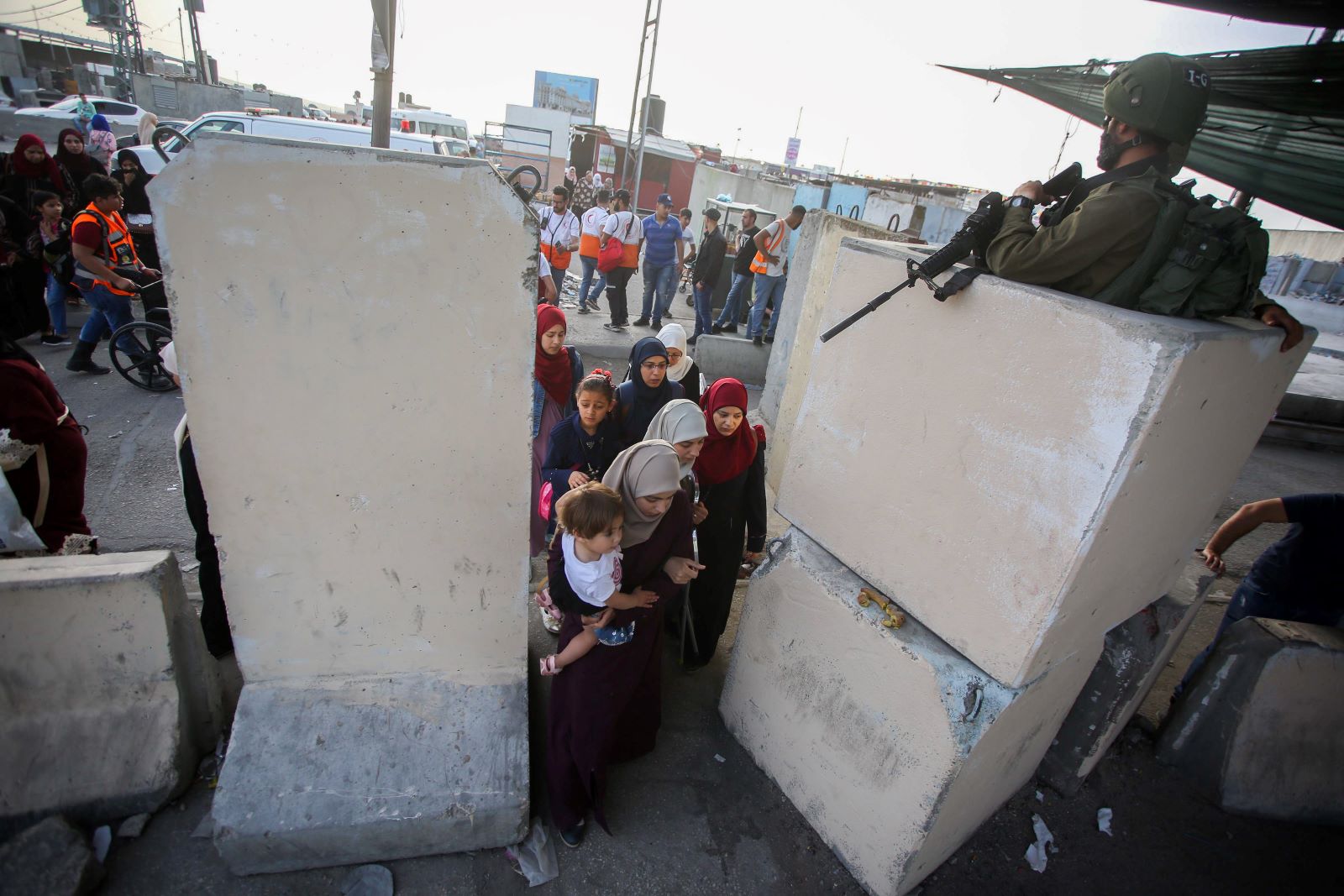 Palestinians make their way through the Qalandia checkpoint during the holy fasting month of Ramadan to Jerusalem’s Al-Aqsa mosque, near the West Bank city of Ramallah, May 24, 2019. (Flash90)

The bypass checkpoints are much trickier as the crossings do not only service Arabs; they are largely designed to connect Israeli settlers in the West Bank with the rest of Israel. Crossing these checkpoints is a very different experience that feels more like going through a toll booth. Israeli soldiers stand on the sides of each terminal trying to identify who are the “threats” — Palestinians — to pull aside for more invasive searches.

How to look ‘non-Arab’

What has become common knowledge among Palestinians is how to cross these bypass checkpoints in the most efficient way possible. The trick, put simply, is to approach the crossing as a “non-Arab.”

After all, the struggle for Israeli soldiers is very real: many of them must be bored standing in the sun all day, filtering through the racial profiling checklist to ease their jobs. It must also be hard sometimes to distinguish between an Arab and an Israeli Jew from their appearance alone — we do look an awful lot alike.

And so, in order not to trouble our oppressors too much, I have put together a 10-step guide to help Palestinians hide or tone down their “Arab-ness”:

1) Have you considered raising a pet? If not, start owning one now and take them out often. Israeli soldiers don’t think that Arabs are cool enough to have pets. Cats are okay, but I would recommend dogs as they are much bigger and more visible in cars. Avoid getting a cute dog because you don’t want to tempt the soldiers to stop the car to play with them. 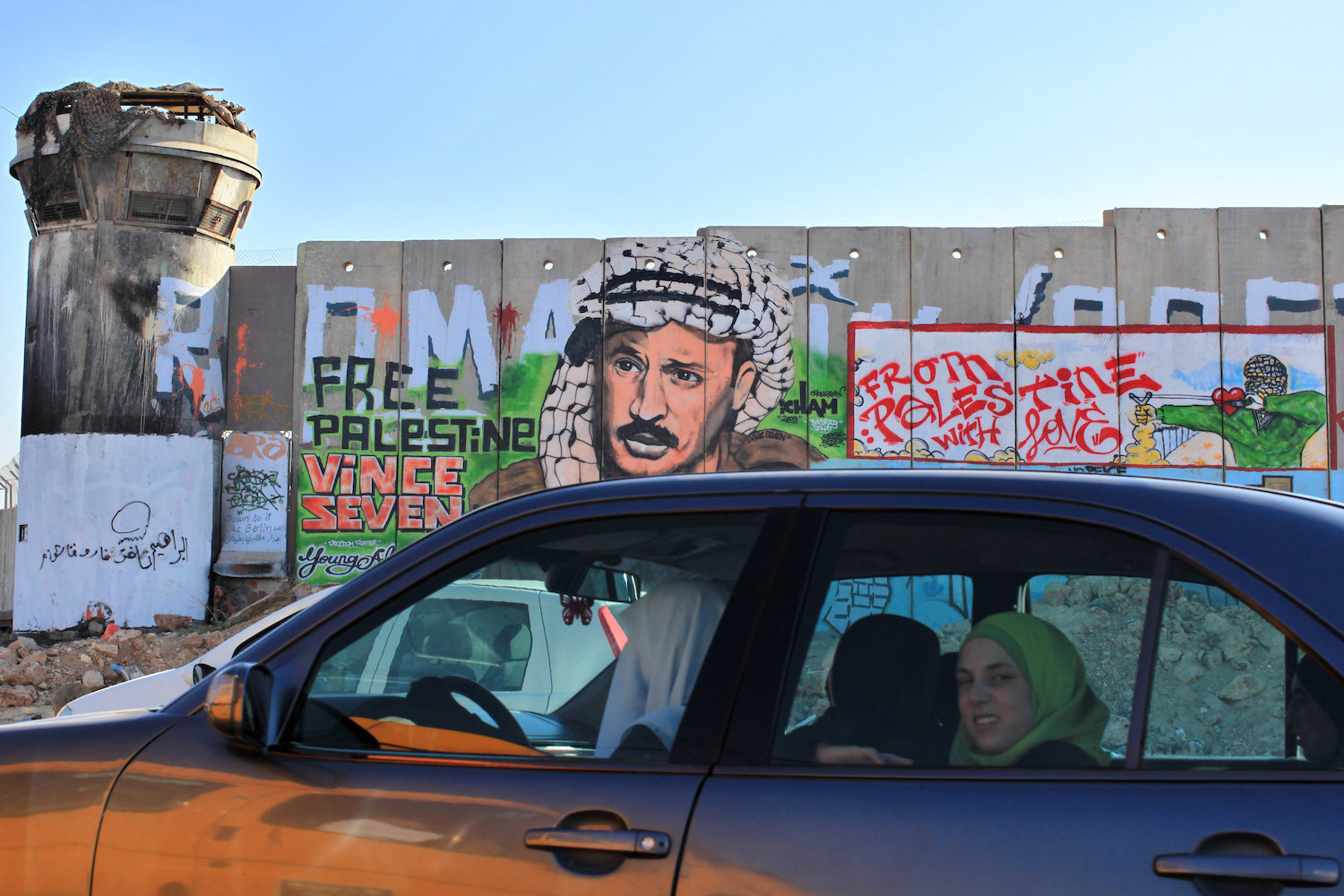 Palestinians in a car pass the separation wall at the Qalandiya checkpoint between the West Bank city of Ramallah and Jerusalem, on Aug 18, 2009. (Kobi Gideon/Flash90)

2) Tattoos, piercings, and other body accessories come in very handy. For Israeli soldiers, Arab men aren’t cool enough to wear earrings; so, men drivers, if you don’t already wear them, make sure to keep a magnetic earring in the car. For women drivers, I’d encourage you to get henna tattoos; they’re affordable and easily removed, just make sure they are clearly visible. Plus, using henna means that you can revive Palestinian culture while easing your journey through the checkpoint.

3) Close the car windows while you are crossing. Arabs have a habit of hanging their hands outside the window. This practice is useful when you’re driving in a Palestinian town and have to wave at 50 people you know on the street, but at a checkpoint, it is just asking for trouble.

4) Clean your car daily — it is a sign of prosperity. Dirty cars or tissue boxes with Arabic writing on them are a bad idea.

5) Die your hair blonde. It’s both trendy and convenient; the more white-passing the passengers, the fewer reasons the soldiers will have to stop the car. The probability of a blonde Arab, some Israelis believe, is very low and, accordingly, soldiers will not be inclined to pull you over.

6) Work hard so you can continuously afford to upgrade your car. For Israeli soldiers, old cars are a sign of backwardness and imply that the driver has only recently moved on from riding camels to work. Avoid getting a Mercedes though — apparently Arabs are known to prefer that brand. Yes, it’s a great car, but not for this purpose. 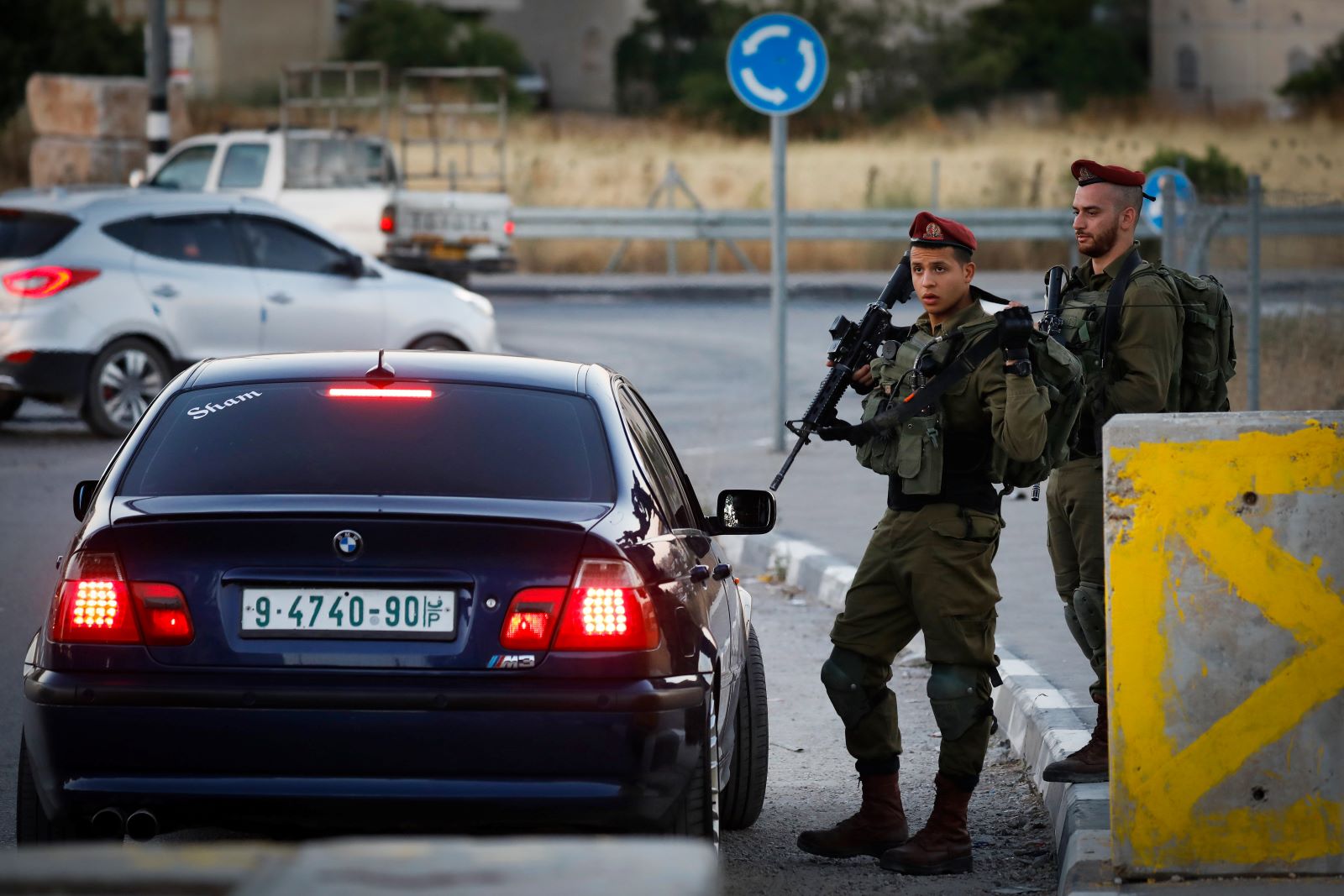 Israeli soldiers check IDs of Palestinian drivers at a checkpoint at the entrance of the West Bank city of Hebron, July 2, 2019. (Wisam Hashlamoun/Flash90)

7) Driving with women who smoke has also proven to reduce the chances of being stopped by soldiers; they think Palestinian women aren’t allowed to smoke. Of course, I do care about the overall health of Palestinian women, so I won’t encourage Palestinian women to smoke every time they cross a checkpoint — but just keep it in mind.

8) Men, you must be very careful with the beard; it can really go either way in helping or harming you. You want to make sure to keep up with the most contemporary hipster styles, otherwise it will just look like a religious practice and it will backfire.

9) Show your support for the LGBTQ community — Israeli soldiers think that all Palestinians are homophobic.

10) Listening to music in Hebrew while crossing the checkpoint has proven to work for some people. Mizrahi music can be a good middle ground for combining Arabic melodies with Hebrew words. But be careful because this tactic has become overused.

The above guide remains your best bet to get to work or events on time as a Palestinian. In a just world, we should not have to reduce our “Arab-ness” in order to freely move from one place to another. But many of us have become too numb to even feel the pain and humiliation of these checkpoints anymore. Until our right to movement is fulfilled, it may be the only tactic we have under the rule of the “only democracy in the Middle East.”