Photos and text by Samar Hazboun 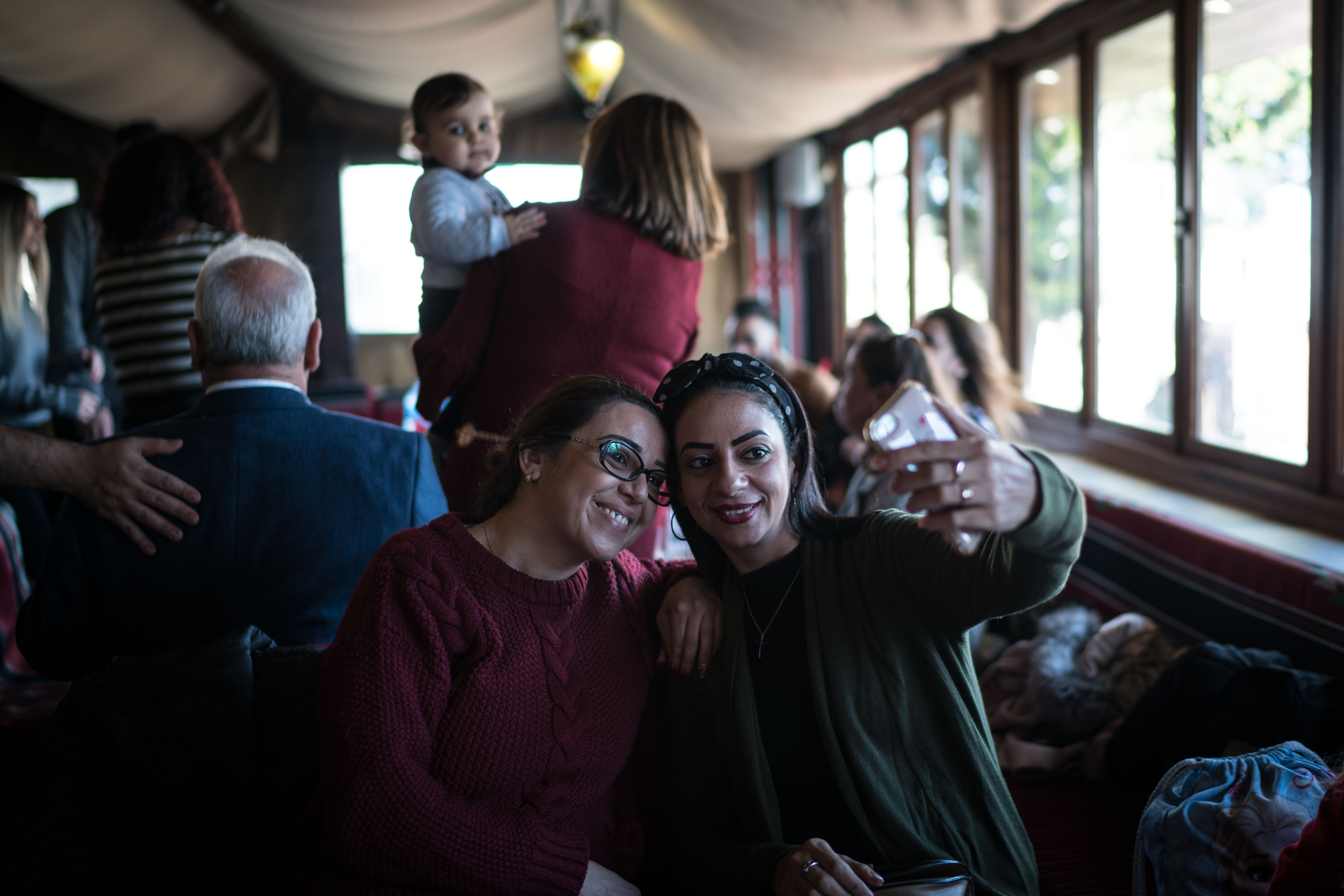 Nisreen Antone takes a selfie with her sister whom she hadn’t seen for three years, during their Christmas lunch in Bethlehem on December 25, 2018.

Nisreen Antone (right) lives in Gaza. She celebrated Christmas in Bethlehem this year, with her sister, whom she hadn’t seen for three years.

Nisreen and her family are among 590 Palestinians from Gaza who were issued permits to travel to east Jerusalem and the West Bank by COGAT, the branch of the Israeli military that administers the occupation. (Last year, the permit quota announced for Christmas was 700.)

There are an estimated 400,000 Palestinian Christians worldwide: most live outside Palestine and Israel, around 123,000 are citizens of Israel, and about 50,000 live in the occupied Palestinian territories, including Gaza.

“Just because we are Christian doesn’t mean we get to leave the strip,” says Nisreen.

The quotas, which Israel considers as “goodwill gestures,” tend to be arbitrary, and are often used as another means of applying pressure on Palestinians living under occupation. Sometimes, only Palestinians who meet certain age limits are authorized to travel. Often, some members of a family receive permits while others are denied, splitting families apart for the holidays.

Photographer Samar Hazboun accompanied Palestinians from Gaza who celebrated Christmas in Bethlehem this year. Images of people celebrating the holiday around the world tend to look colorful, abundant and clearly festive. In the photos below, Hazboun tells a slightly different story, of the subtle, intimate moments that Palestinians share while celebrating Christmas under siege and occupation. 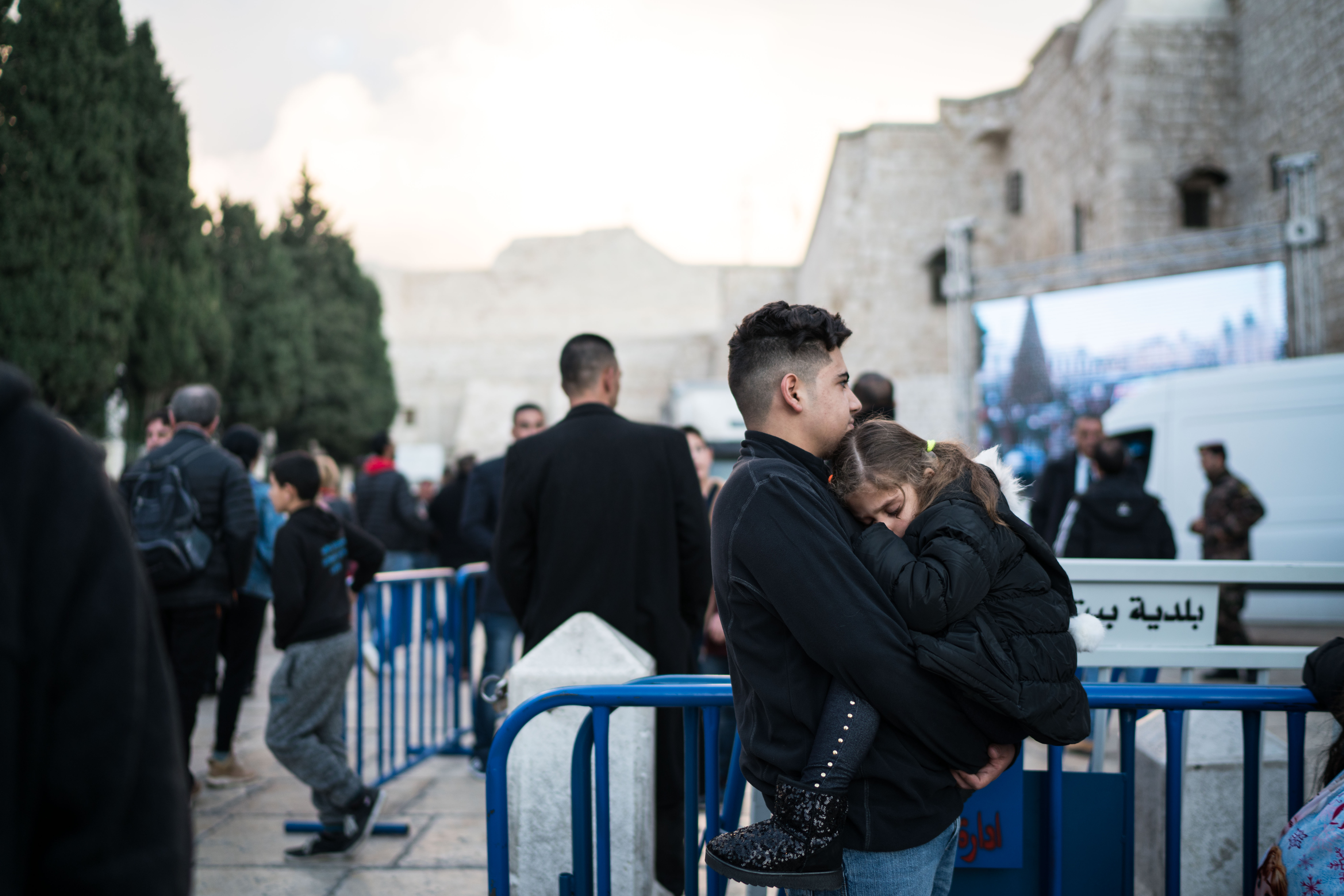 Salim carries his cousin, whom he hasn’t seen for three years, outside the Church of the Nativity in Bethlehem on December 24, 2018.

The Antone family left Gaza on December 24. It took them just over two hours to make the 74-kilometer journey from Gaza to Bethlehem, although sometimes it can take longer.

Since it’s forbidden to bring anything through the Erez crossing — even water bottles, baby food, and phone chargers — the Antones gave their young children water and took them to the toilet ahead of the trip. 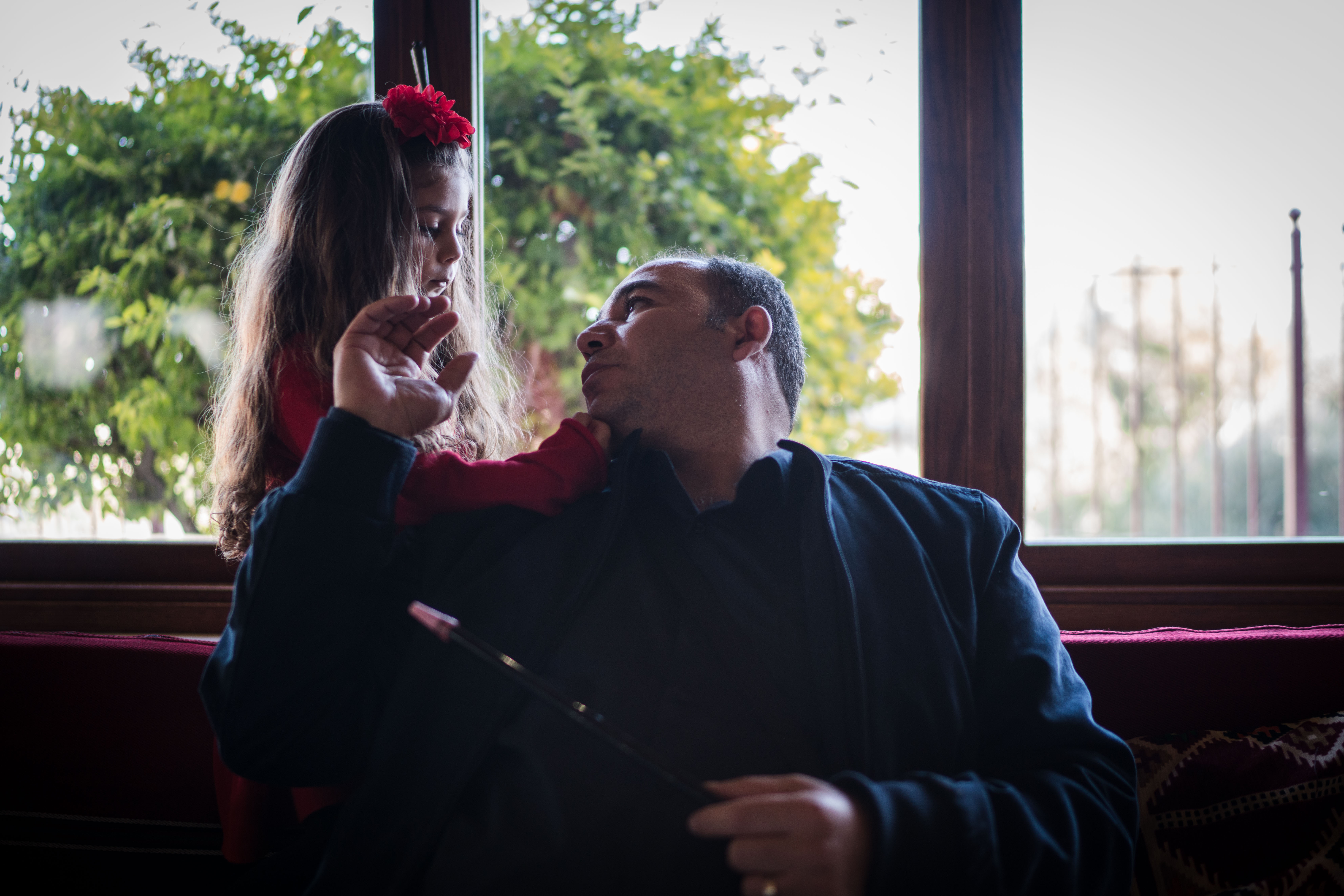 George Antone shares a moment with his daughter during their Christmas lunch in Bethlehem on December 25, 2018.

“It is important that my children come to Bethlehem on Christmas,” says George Antone, Nisreen’s spouse. “Life is very difficult in the Gaza Strip and there’s very few things for children to do there. They also need to see their relatives who live outside of Gaza.”

“People need to stop referring to us as the ‘Christian community.’ We are not a community, we are a religious group which is part of Palestinian society,” George continues. “The war machine doesn’t distinguish a Palestinian by his religious beliefs.” 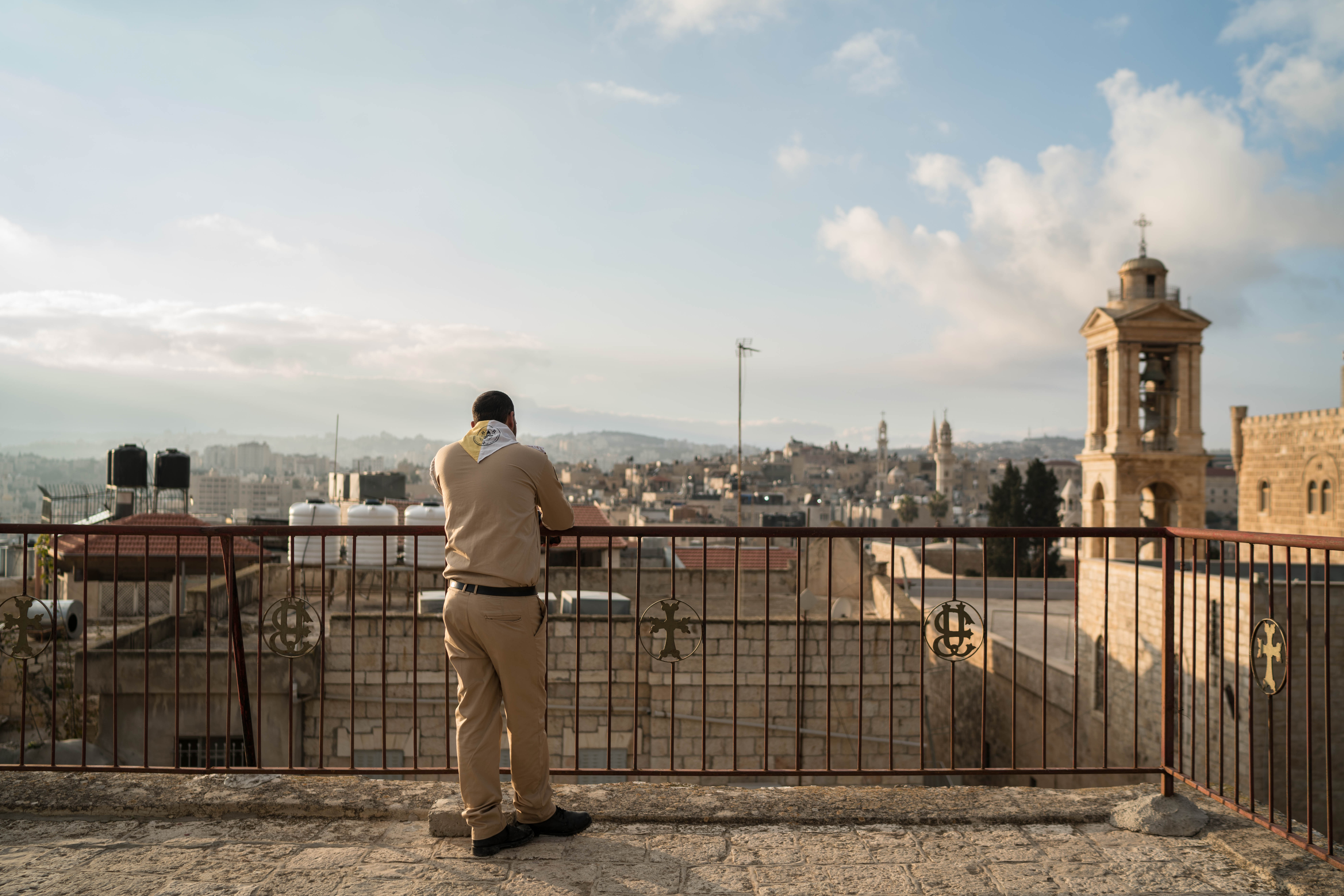 Yousef Tarazi, dressed in his scouts uniform, looks over the city of Bethlehem on December 24, 2018.

Yousef Tarazi made the journey from Gaza to Bethlehem alone, as his parents were refused a permit. On Christmas Eve, the Palestinian scouts movement held a festive procession in Bethlehem, and Tarazi decided to wear his scouts uniform that day as well.

“I wish Palestinians would make peace with each other and solve the conflict with Israel too. We deserve to live and to have our rights,” says Yousef. 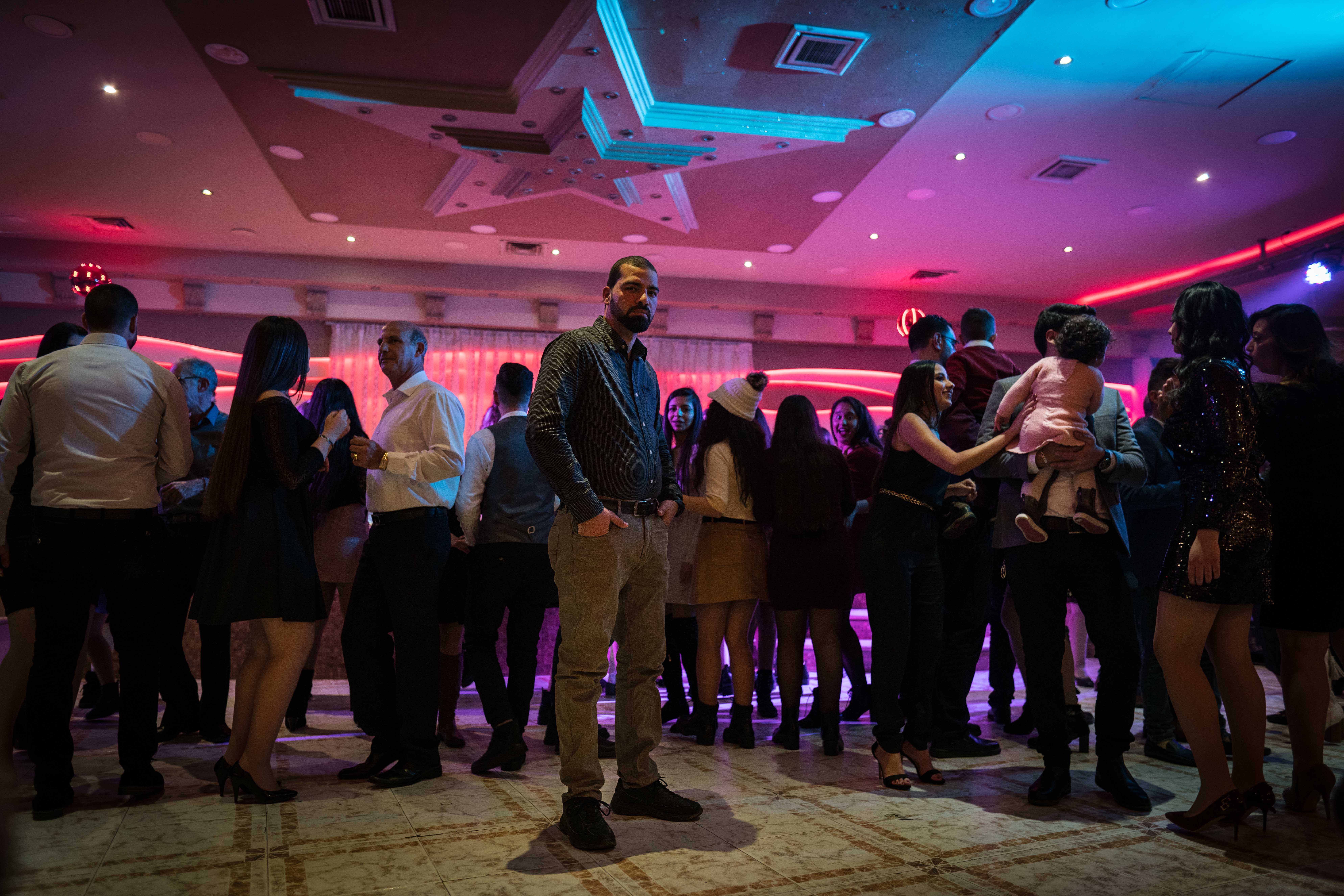 Yousef Tarazi from Gaza stands amid a crowd during a Christmas party in Bethlehem on December 25, 2018.

On December 25, Yousef attended a Christmas party organized by the Terra Sancta Scout Troop in Bethlehem.

“I’m happy to be here, in the birthplace of Jesus, and to connect with the Christian community, but I feel alone without my family, who couldn’t come from Gaza,” says Yousef. 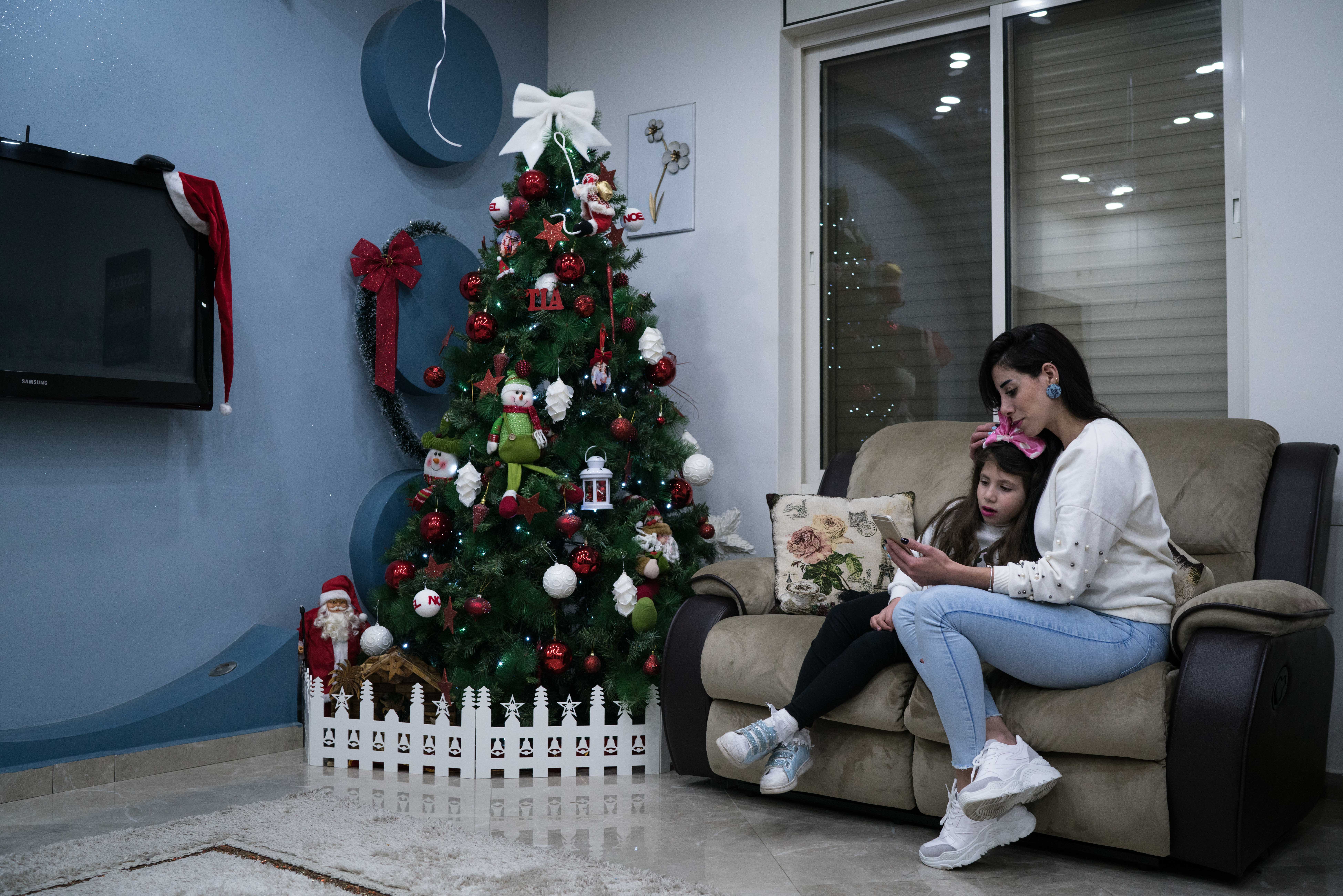 Ruba Jahshan embraces her daughter as they video call her parents in Gaza from her home in Bethlehem on December 26, 2018.

Ruba Jahshan is originally from Gaza. She moved to Bethlehem nine years ago, after marrying a Palestinian from the West Bank. This Christmas, Ruba and her 7-year-old daughter Tia were looking forward to celebrating with the grandparents, who still live in Gaza but received travel permits for the holidays. Christmas Eve also happens to be Tia’s birthday.

On December 24, with Ruba’s parents at the Erez crossing, ready to make the hours-long journey to Bethlehem, Israeli authorities turned them down and sent them back to Gaza. Both Ruba and her daughter were disappointed. It had been a year since Ruba had seen her parents — last year, she was given a one-week permit to visit them in Gaza.

Instead, the family exchanged Christmas and birthday greetings over a video call — a form of communication they’ve become accustomed to.

“Christmas is my favorite time of the year and I love celebrating it with my family. I’m still hoping my parents will be able to come from Gaza!” says Ruba.

Samar Hazboun centers her main body of work around human rights, with a particular focus on the Middle East. Born in Jerusalem and raised in Bethlehem, Palestine, Hazboun first explored photography while pursuing a degree in International Relations in Prague. Hazboun worked as Middle East and North Africa Photo Editor for Agence France Presse (AFP) for four years, she was selected by the World Press Photo for the JSM 2018, is a recipient of the Arab Documentary Photography Program grant by Magnum Foundation and AFAC, and the Culture in Defiance grant by the Prince Claus Fund, alongside an award by the Khalil Al-Sakakini centre for her Hush project.