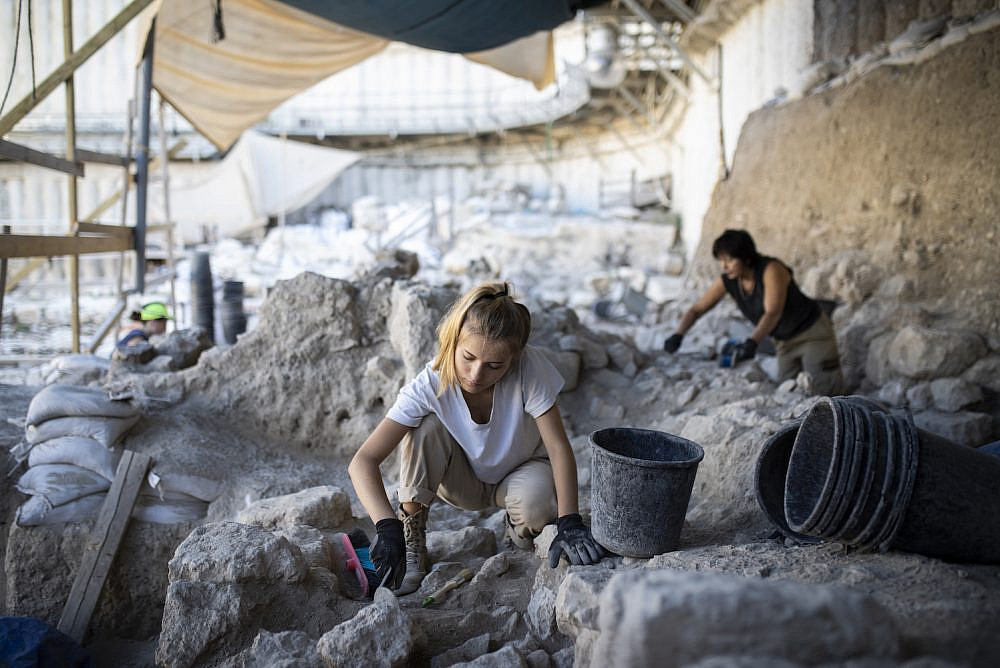 Workers at the City of David archaeological site, near Jerusalem's Old City, on July 22, 2019. (Hadas Parush/Flash90)

The news that the Jewish National Fund has for decades collaborated with settler group Elad in East Jerusalem, revealed on +972 Magazine this week, may have come as a surprise to some abroad. The JNF is revered in the Jewish diaspora for its tree-planting campaigns and for lending its name to parks across Israel. Elad, on the other hand, is known for seizing homes in the Palestinian neighborhood of Silwan in East Jerusalem, close to the Old City.

Yet the cooperation between the two entities is hardly aberrant. For decades, the JNF has played a central role in erasing evidence of Palestinian localities depopulated since the 1948 and 1967 wars, acquiring property in the occupied West Bank, and facilitating the settlement project. All these activities have served, in one way or another, to advance the longstanding Zionist imperative of “maximum land, minimum Arabs” — the same goal that drives Elad’s efforts to, in its own words, “Judaize” East Jerusalem.

The two organizations also share a common approach: using Zionism’s conception of the Jewish relationship to the land to present their activities as natural, almost predestined, realizations of a national dream. While the JNF’s methods involved buying up land and creating green spaces, Elad has, since the early 1990s, set its sights on controlling archaeological excavations in East Jerusalem.

Elad’s method, however, is arguably more sophisticated and far-reaching: it harnesses not only the land, but what lies (or doesn’t) beneath it, in order to revise and excise segments of the region’s past in service of a reductive vision of its future. And while historical revisionism has always been central to Israeli nation-building, it has, under increasingly right-wing governments over the past few decades, become ever-more brazen and broad in its scope.

Accordingly, Israeli archaeology — which has long served as a staple of Zionist consciousness-making — has become increasingly subject to the ministrations of state and settler factions. These groups are determined to present the narrative of Jewish presence in the land as one of irrefutable millennial ownership, interrupted by an interim period of exile before being restored with the State of Israel’s establishment.

In the course of this instrumentalization, archaeology is used to counter the narrative of occupation — and of the Nakba — through action as well as symbolism. Few entities have been as central to this politicization of archaeology as Elad, most notably through its flagship project, the City of David park.

Located in the heart of Silwan, the City of David (“Ir David”) national park is one of the most sensitive archaeological sites in the country. It is steps away from the walls of the Old City, and its significance as the supposed seat of power of King David (a narrative that has yet to be conclusively proven) has made it one of Israel’s archeological holy grails. For this reason, it has been the site of almost continuous Israeli excavation since the late 1970s, which until the early 2000s was exclusively under the auspices of government agencies. The Israel Antiquities Authority (IAA) oversaw the excavations, while the Nature and Parks Authority (NPA) ran the national park around it. 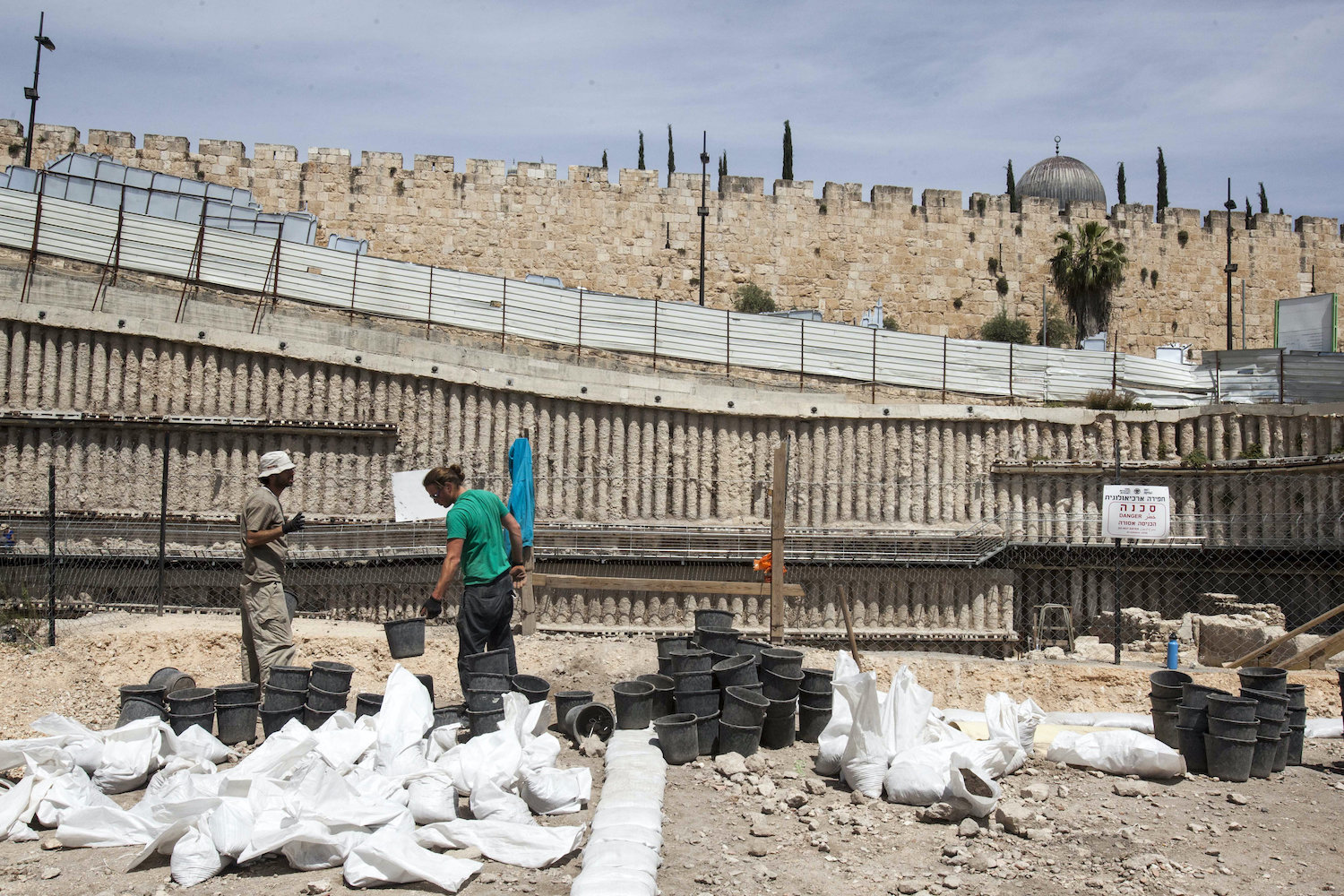 Workers at the City of David archaeological site, near the Palestinian village of Silwan and across the street from Jerusalem’s Old City, April 7, 2013. (Uri Lenz/Flash90)

In the late 1990s, however, the crosswinds of decreasing public funds for the IAA and an increasingly right-wing bent in both national and local politics saw the government transfer responsibility for the City of David park to Elad — which, in 1994, had also begun underwriting digs on behalf of the cash-strapped IAA. Despite its public protestations, the IAA was only able to slow down the site’s eventual handover from the NPA to Elad. By 2002, five years after the government elected to grant Elad the keys to the park, the settlers had the City of David in their hands.

The park, one of Jerusalem’s leading tourist sites, is Elad’s most potent territorial, political, and symbolic weapon. The organization has presented excavation findings in a manner that entirely befits their ideological mission: visitors to the City of David will encounter a narrative centered on the biblical era, while eliding the multiplicity of other histories buried beneath Silwan’s streets.

Equally, Elad’s functional role as underwriter of the IAA’s digs has provided it with profound influence over the execution of the digs themselves. Many of the excavation tunnels under Silwan have, according to the NGO Emek Shaveh, been dug in contravention of archaeological best practice. Rather than tunneling vertically, excavators have dug horizontally, thereby sabotaging the integrity of any archaeological discoveries.

Moreover, these tunnels have extended underneath local Palestinian homes, causing some of them to become so structurally unsound that their residents have had to leave. Yet meters away, in the biblical diorama of the City of David, visitors are left entirely in the dark about the present-day status and story of Silwan, as well as the history of its Palestinian residents. They are instead presented with a story of Israeli-Jewish redemption — a people returned to its home and to history after millennia in the wilderness.

It is not just Elad’s vision of East Jerusalem that the JNF has declined to repudiate: it is also the group’s reductive version of history.

For Elad — and the right-wing, religious-nationalist ideology to which its associates subscribe — archaeological discoveries are a means to fulfill Zionism’s teleological axis of antiquity-exile-return. This framework is not exclusive to the religious right; as the late sociologist Michael Feige observed, Israeli archaeology has always performed a dual function in the national narrative: “one, to show the ancient unity of the Jewish people, in contrast to its fragmentation in exile; and two, to show that people’s ancient rights to the Land of Israel.” 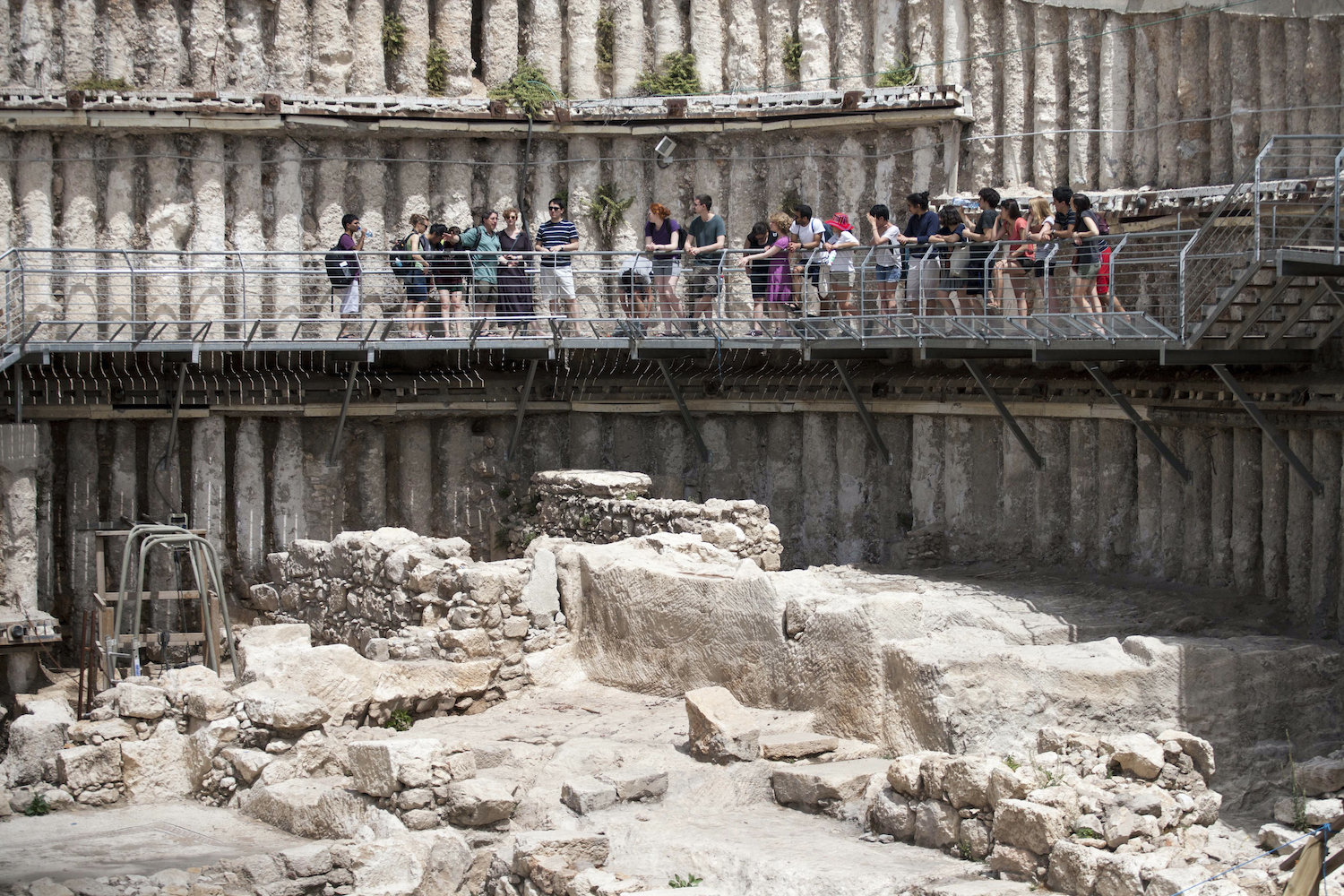 The foundation of the State of Israel, as Feige explained, subsequently birthed a duel over narratives which ultimately privileged an interrupted, highly-selective history of Jewish presence in the ancient homeland over the history of the diaspora — effectively erasing the latter’s past.

What Elad is determined to present, then, are the supposed glory days of the Jewish people during the Davidic and Second Temple periods — a prelapsarian past before the ignominy of exile (and the implied accompanying shame of non-Jewish presence in, and possession of, the Holy Land).

Elad’s archaeological pursuit of this narrative therefore perpetrates a dual erasure: not only is the diaspora’s history liquidated along with its communities (which become superfluous since ‘return’ to the homeland has been realized), but so is the interim history of other nations in the Holy Land during that period of exile. Two sets of history — as far as the Jewish-Israeli imaginary is concerned — are snapped shut.

Elad has, along with their governmental and non-governmental backers, gone beyond rhetoric and storytelling with this historical framework: they have made it a central pillar in their project of Judaizing East Jerusalem as a whole. Practically speaking, the excavations at the City of David have served to make the Palestinians invisible in the neighborhood, whether by taking over their homes, digging under them, or removing their public spaces.

Symbolically speaking, however, Elad’s archaeological activities are a means of not only permitting Israeli settlers to evict Palestinians or keep them locked under proliferating layers of security, but also granting them the ethical right to do so. If, as the kernel of Zionist ideology suggests, the return of Jews to their ancient homeland is a moral, historical, and religious right, then in the eyes of a group wishing to take that belief to its ultimate conclusion, expelling Palestinians and replacing them with Jews is more than a divinely-ordained and politically legitimate act: it is a duty.

This logic is at the heart of Elad’s use of archaeology and its belief that it has the right to act as a landlord in Silwan. It is this political vision that the JNF elected to align itself with — a fact that no amount of “greenwashing” and tree-planting can change.