The secretary general of the CPI, Muhammad Naffa, stands by his support of the Assad regime – and turns out to be a hardline Stalinist

I’ve covered recently the strange behaviour of the secretary general of the Communist Party of Israel, Muhammad Naffa, who participated in a rally supporting the Assad regime.

If anyone thought, however, that criticism following this rally – and there has been criticism aplenty – will make Naffa change his mind, they are in for a disappointment. In an aggressive article in the CPI’s Arabic newspaper, Al Ithihad (translated into Hebrew here), Naffa openly proclaims support for the Assad regime, stating that this is the position of the rest of the communist parties, and blames his opponents of breaking rank with them.

Of interest is the fact that Naffa comes out as a supporter of Stalin, possibly the deadliest tyrant in history. He attacks Khrushchev, who exposed Stalin’s crimes, and reverts to a claim that Stalin may “have erred” but that he was nevertheless a great Communist leader.

Shockingly, as an afterthought, Naffa says that “five years ago, the group of Zionist doctors in the Soviet Union admitted that it, in fact, attempted to poison Stalin.” Naffa is referring here to the Doctors’ Plot, Stalin’s last planned show trial, in which he intended to blame Soviet Jews of being a part of a global Zionist plot, culminating in an attempt by his Jewish doctors to murder him. There is reason to believe Stalin planned to either exterminate or expel Soviet Jewry into the gulag system.

The plot was utter nonsense, though it had a beneficial effect: Since Stalin’s doctors were in prison, they were not at hand to heal him when he suffered a deadly stroke in early 1953, and so, after causing untold suffering for 28 years, he finally croaked. A month after Stalin’s death, the Soviet Union released the detained doctors, admitting their confessions (there were, of course, confessions) were coerced out of them.

The plot, with all its absurdity, caused a break within the Israeli left at the time. It appears almost incomprehensible sixty years later that the leader of the Israeli communist party can believe in a plot the Soviet Union itself denounced, but that seems to be the case. There are still a few dimwit supporters of Stalin. One does not expect them to lead responsible political parties. 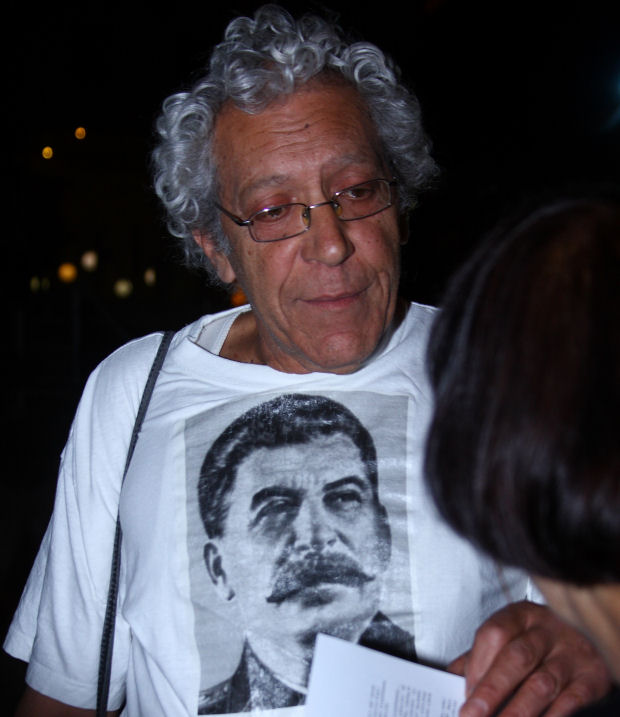 There are still some deluded Stalinists around. Generally, however, not as party leaders. (Photo: Yossi Gurvitz)

Aside from that, Naffa’s rhetoric is unbelievably stale, reeking of 1950s Communist propaganda – you know, the one which claimed to be anti-imperialistic yet never said anything about the Soviet occupation of eastern Europe, the Ukraine, and central Asia. This is ironic, considering that Hadash has managed to market itself to Hebrew speakers as the model of a hip party.

I guess there’s a reason they don’t translate Naffa into Hebrew on their own. I guess the old Stalinists still don’t understand how the web works, and think they can use the usual doublespeak without fear. That age is over, and if the CPI wants to keep its Jewish voters, it had better realize this, and fast – and get itself through a seriously-needed purge.