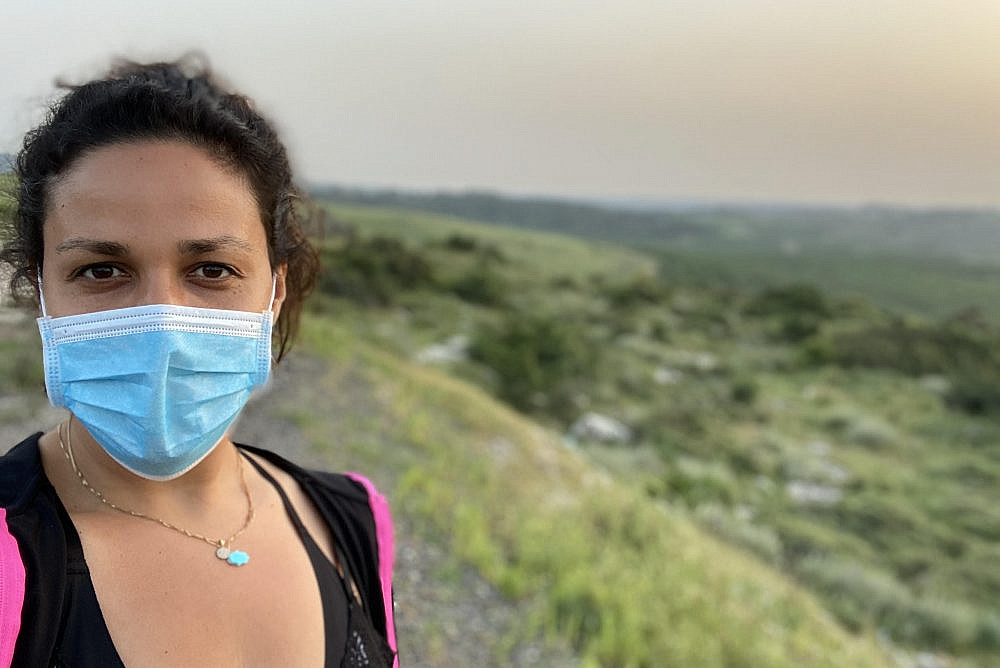 Noam Shuster upon her release from the Dan Hotel in Jerusalem, where she was quarantined with other recovering COVID-19 patients, April 20, 2020. (Courtesy of Noam Shuster)

In August last year, I packed my bags for a one-year fellowship at Harvard University to work on my one-woman comedy show called “Coexistence My Ass.”

I grew up in Wahat al-Salam/Neve Shalom, the only community in Israel where Palestinians and Jews intentionally live together. Growing up among progressive members of both societies, speaking both Hebrew and Arabic, I was supposed to become the poster child of a peace that is possible. Instead, I became highly critical of the ways “coexistence” was being used to avoid addressing the root problems, and became immune to the empty slogan of “give peace a chance.”

My year in the United States was going extremely well. I performed all over the country alongside renowned Iranian-American comedian Maz Jobrani. I was set to premiere my show this coming May at the Kennedy Center, one of the most prominent performing arts spaces in America.

But then the new coronavirus broke out, and it changed my life — all our lives — forever.

My inbox began looking like a cancellation festival, and the president of the university announced that the campus was shutting down. I knew I had to make a decision: do I stay in Boston, or fly back home to Israel-Palestine? I chose to take the risk and go home, to be close to my family, even if it meant I would have to be quarantined for two weeks upon my return.

My journey started with a canceled flight that was meant to take me from Boston to New York. Determined, I hopped on a train to an eerily empty New York City, then took an Uber to John F. Kennedy International Airport, where I spent 12 hours waiting for my flight to Tel Aviv. I believed if I were careful enough, I could avoid catching the coronavirus along the way.

I was so wrong.

Four days after I arrived home, I started developing COVID-19 symptoms — all of them, including fever, shivers, muscle pain, severe exhaustion, and loss of appetite. I couldn’t smell or taste anything. I knew I had the disease even before I tested positive.

It didn’t feel like the flu. It felt like my body was on fire, burning from the inside. The pain was so intense that it caused me to faint one night. I don’t remember picking up the phone and calling the ambulance. My parents couldn’t come near me to help, even though they were quarantined in a separate room just steps away. The feeling of powerlessness was just as traumatic for them as it was for me.

The ambulance took me to Hadassah Hospital in Jerusalem, where doctors put me on oxygen support for 24 hours. It helped immensely. I’m 33 years old and healthy — I can’t imagine what people who are more vulnerable to this disease go through. It’s nasty, potent, and cruel. 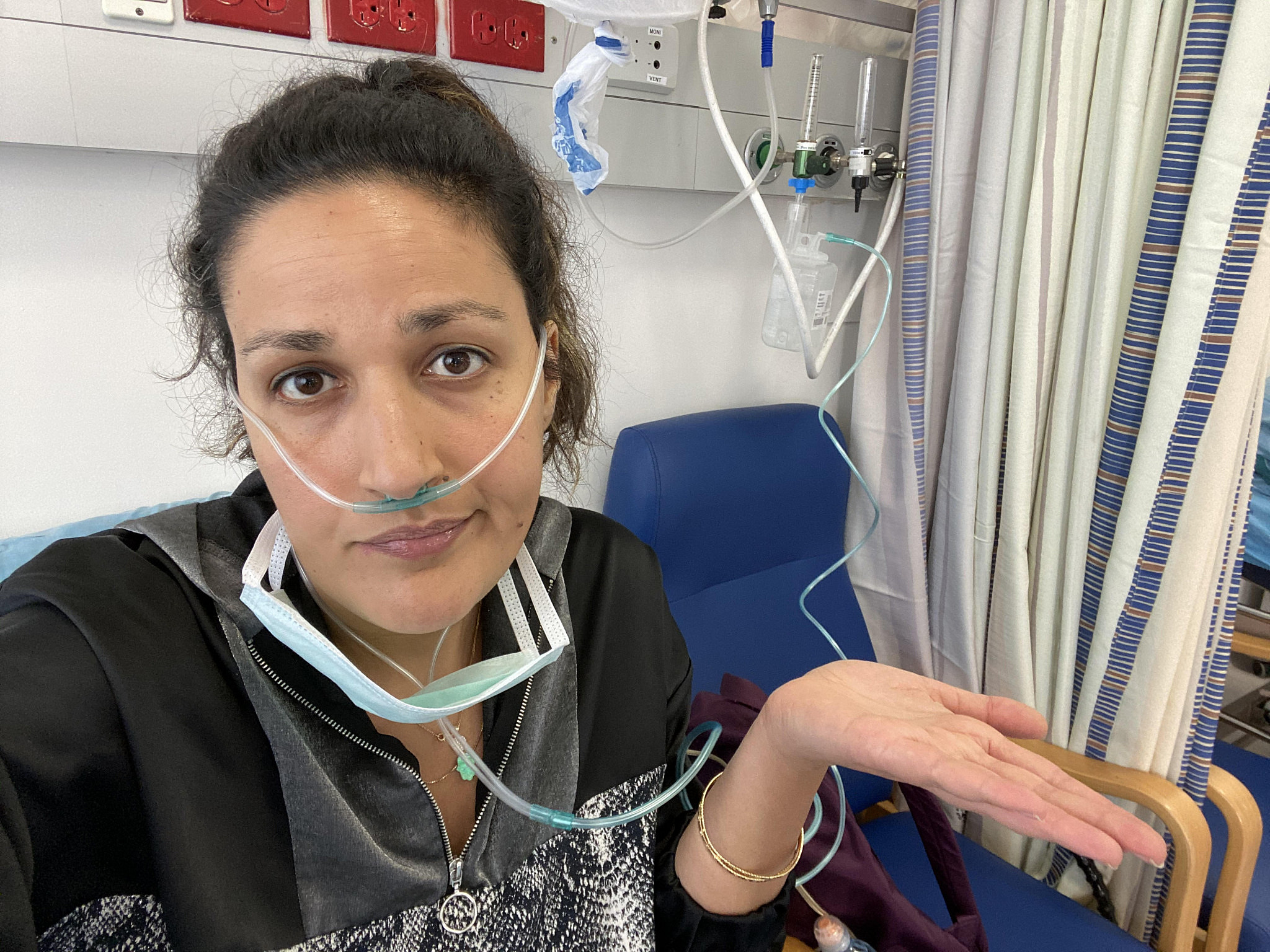 Upon my release from the hospital two weeks ago, I was taken to the Dan Hotel in Jerusalem to continue recovering alongside other COVID-19 patients. I’ve found this “coronavirus hotel” to be one of the weirdest places in the world. It became a shelter to the most diverse, unexpected group of people I’ve ever known; Israelis and Palestinians from all walks of life, healing together. As the world practices social distancing and learns to cope with an alien, counter-intuitive sense of isolation, we are all cooped up together, caring for each other, socializing — even hugging.

If I was going to be stuck there sick for some time, I thought, the least I could do was try and turn things around. And so, I performed to a crowd of about 150 people at the hotel lobby. I couldn’t help but think to myself how only days ago, I was pursuing my big comedy dreams in America, and now, here I was, telling jokes to a bunch of coughing Arabs and Jews under lockdown.

Because I grew up with both cultures, I’m used to navigating between the two groups in a way that recognizes that power dynamics are always present. I had hoped to use this shared quarantine experience to come up with new material for my shows. But the lack of tension in the hotel was anti-climactic. Shocking, even.

In the outside world, Palestinians are perceived as scary and suspicious. They constantly have to prove that they deserve to be treated as equals, socially and politically, while Jewish Israelis — especially those of European descent — enjoy unchecked privilege. And yet, at the hotel, something about this extreme situation brought out different sides of people that I had never witnessed before.

One day, as I was walking around the hotel lobby, I heard snippets of a conversation between two young men, a religious Jew and a Palestinian. I could only make sense of a few words at first: “1948,” “Palestine,” “Ashkenazim.” Intrigued, I moved closer, just in time to hear the religious Jew tell the Palestinian how, before the European immigrants came to Israel, there was no separation between Arab Jews (Mizrahim) and Palestinians, who were accustomed to sharing this space.

Palestinians and Jews would gather in the lobby every night to chat and play games, the playlist alternating between Mizrahi music and Arabic classics. Was I going crazy? How can this be? Why did it have to take a global pandemic for us to treat each other with such radical compassion? Why is it that only with this shared external threat, we are able to show accountability for each other’s freedoms and well-being?

To be clear, the systemic injustices outside have not suddenly disappeared. Just last week, Israeli police raided a COVID-19 testing clinic in the Palestinian neighborhood of Silwan in East Jerusalem because it was run by the Palestinian Authority.

But something about the pain and tragedy of this moment made me realize that, sometimes, it’s okay to embrace the good; to notice it, and amplify it. I hope we’ll take some of it with us when this is all over. I know I will.

Noam Shuster (@ShusterNoam on Twitter) is a freelance comedian, performer, peace builder and activist. She grew up in Neve Shalom Wahat Al Salam. She performs in three languages: Hebrew, Arabic and English. In 2018, she was named the “New Jewish Comedian of the Year” in London. The same year, she was also the first Jewish performer in the Palestine Comedy Festival, and her content went viral in the Arab media. Noam was at Harvard University developing her one-woman show before the COVID-19 crisis began.