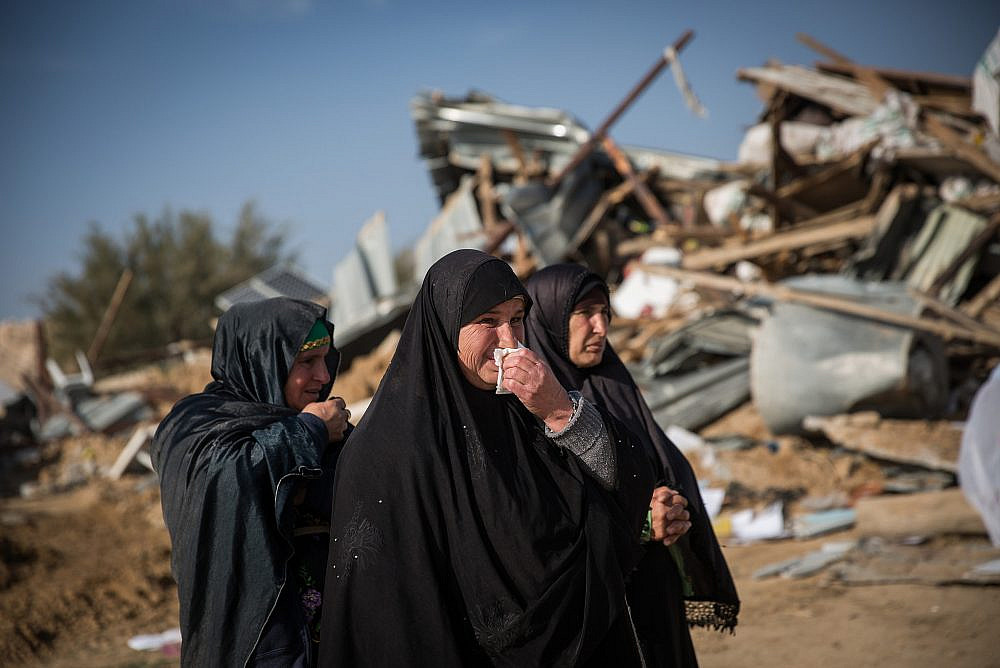 Bedouin women collect their belongings from the ruins of their demolished homes in the unrecognized village of Umm al-Hiran in the Negev desert, in the in the Southern Israel, January 18, 2017. (Hadas Parush/Flash90)

The unrecognized Bedouin villages in the Naqab/Negev in southern Israel are facing a crisis in the shadow of the coronavirus pandemic, say residents and activists. Due to the lack of infrastructure and health services, the communities are unable to follow the guidance set out by the Israeli Health Ministry.

Attiah al-Aasem, chair of the Regional Council of Unrecognized Villages in the Naqab, warns that “the coronavirus will worsen the day-to-day problems in the villages.” In the absence of utilities such as water, sewage, and garbage collection, residents are having to do their best to look after themselves, al-Aasem adds.

“The Naqab is liable to become like northern Italy,” says Salame Alatrash, head of the Al-Kasom Regional Council.

“People are living in highly crowded conditions here. A 50-meter shack can house between seven to twelve people,” he says. “The government knows about the severe crowding and the lack of infrastructure. And what have they done all these years? We warned them it was going to lead to disaster.”

One resident of an unrecognized village says that there have been no preparations and that no personal protective equipment is available. “We’re aware [of the situation], but how will we protect ourselves?” he says. “We’re afraid, but we have to go to the grocery store.”

‘We are living in fear and panic’

Around 150,000 people live in the Naqab’s 37 unrecognized villages. Due to the Israeli government’s decades-long refusal to grant them legal status, these villages are denied basic utilities such as water, a sewage system, or garbage collection, and are in constant battles to resist home demolitions and forced transfer. Their relative isolation from urban centers has helped to keep the pandemic at bay for the time being, but residents fear that the lack of infrastructure will cause a mass outbreak once the virus does arrive.

“This crisis is revealing a reality that goes unnoticed in normal times,” says Sari Arraf, a lawyer with the Palestinian human rights organization Adalah. “It’s highlighting the inequality faced by the unrecognized villages. If the requests we had made for the villages to be connected to basic infrastructure had been fulfilled, we wouldn’t be in a situation that is endangering not only residents of the unrecognized villages, but also the entire population of the Naqab.”

“We are living in fear and panic,” says Aziz Abu Mdeghem, a resident of Al-Araqib, which Israeli authorities have demolished 175 times over the past 10 years. “We have no way of protecting ourselves from the coronavirus. We cannot store food, and there is nowhere nearby where we can wash our hands all the time, because there’s no running water.” 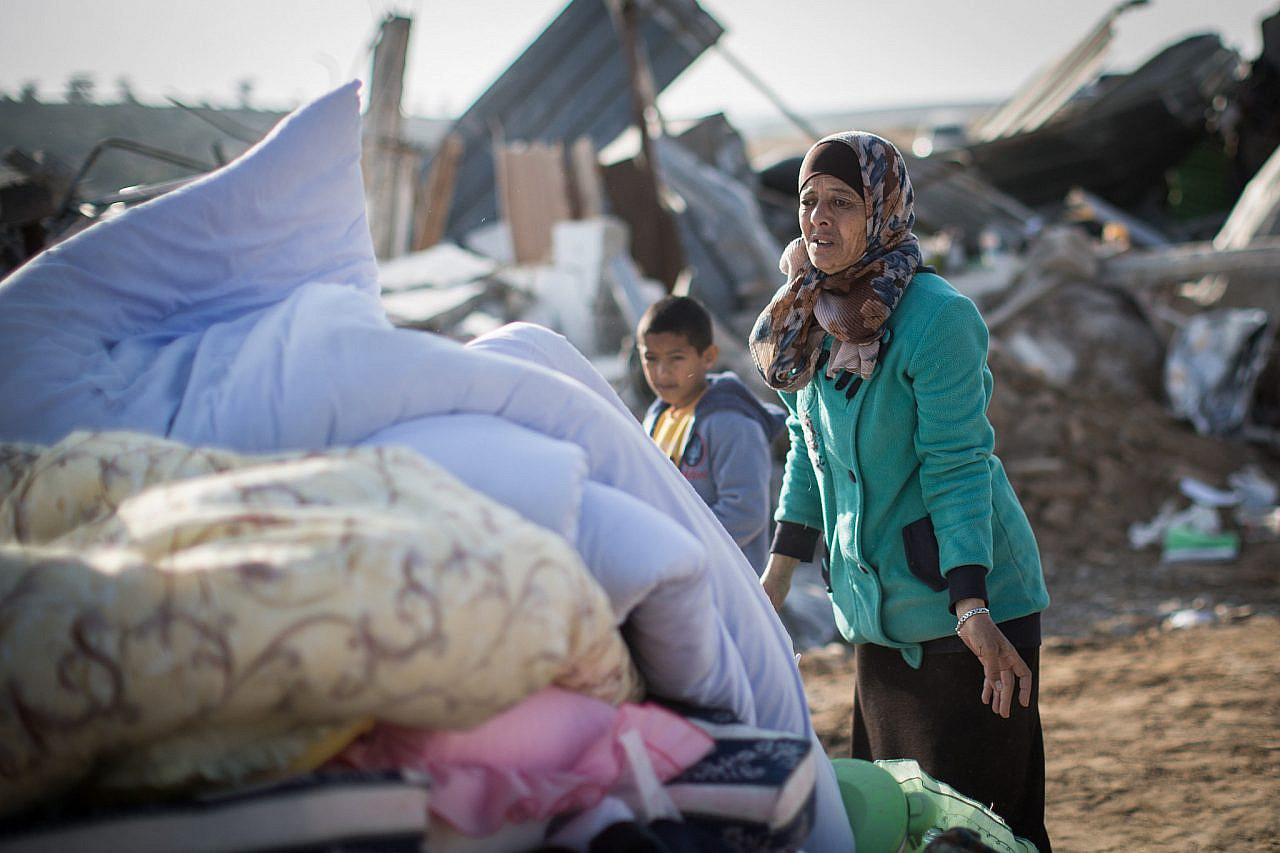 Bedouin collect their belongings from the ruins of their demolished homes in the unrecognized village of Umm al-Hiran in the Negev desert, in the in the Southern Israel, January 18, 2017. (Hadas Parush/Flash90)

Residents are afraid to leave the village to buy food, and fear the day when one of their neighbors may have to go into self-isolation — because the village is not set up to enable such distancing.

Alatrash, the Al-Kasom council head, flagged the same concern to the Health Ministry, asking them several weeks ago for permission to turn schools in his district into isolation centers. He has yet to receive approval.

While Al-Araqib has no running water whatsoever, other unrecognized villages are able to make use of solitary water supply points set up by Israel’s national water company, which the villagers pay for. These access points can be miles away from the villages, and do not provide enough water for the communities.

“The villages receive the minimum amount of water at maximum cost,” says Arraf. The pricing is based on two tariffs — the sales quantity, and the consumption-above-sales quality. Regular users of water pay for a set amount, above which they pay extra. The Bedouin villagers “pay double for the first drop of water, which makes it expensive to comply with Health Ministry guidelines. It’s absurd,” Arraf adds. Moreover, because residents have had to build their own water networks using long above-ground pipes inside their villages, problems with water pressure and quality often arise.

The lack of infrastructure also means that even in normal times, ambulances cannot reach the villages due to the absence of paved roads. It is therefore unclear how medical assistance could arrive if coronavirus victims require urgent evacuation.

“We are all in crisis here,” says Alatrash. “This is not a normal situation, and there’s no distinction between Jews and Arabs — we need to work together.”

‘Everything has been canceled, except for demolitions’

The Israeli government’s measures to combat the pandemic are likely to have severe economic consequences for many of the unrecognized villages. “There are thousands of Bedouins who are temporary workers earning NIS 150-200 per day in agriculture, restaurants, hotels, and washing cars,” says Alatrash. “They aren’t entitled to unemployment, and if this crisis continues, they’ll need support that we can’t provide.”

Meanwhile, as of last Monday, Israeli authorities were still carrying out home demolitions and destroying crops belonging to unrecognized Bedouin villages, despite the state of emergency. The primary concern of Al-Araqib’s residents remains the threat of losing their homes, although the authorities have torn down their shacks just once since the virus outbreak began — as opposed to every other week, as is usual. “Home demolitions are our coronavirus,” says Abu Mdeghem.

On Sunday, building planners and inspectors from the Finance Ministry arrived in Rahma village and distributed demolition notices for buildings that had been refurbished after being damaged by flooding two weeks earlier. Residents noted that the authorities arrived without any personal protective equipment and entered their homes in a group of eight, without keeping any distance between themselves.

“Everything has been canceled, except for demolitions against Bedouins,” says al-Aasam. “This is what the state is worrying about — someone putting up a piece of tin or hammering in a nail. Distributing [demolition] orders is an excuse — they want to exploit the opportunity to hurt people, who now have no time to build because they’re busy worrying about the coronavirus.”

The inspectors’ visits are liable to endanger the residents, al-Aasem adds. “Maybe one of them has the virus, because it has spread across the whole country.”

Following the inspectors’ visit, a number of rights groups appealed to the government to stop all demolition activity against the homes and lands of the unrecognized villages, especially as the pandemic continues — pointing out that such operations jeopardize not only the health of the village residents, but also efforts to turn the tide on the coronavirus outbreak. They have yet to receive a response.

Despite the persistence of demolition operations, however, there are signs that the government is starting to adjust its activities in the unrecognized villages, amid an understanding of the potential for catastrophe. On March 22, for the first time since the establishment of the Authority for Bedouin Development and Settlement in the Negev (often called “the Bedouin Authority”), the Agriculture Ministry decided that the body would lead government aid efforts for the unrecognized villages, in cooperation with various ministries.

Normally, the Bedouin Authority is responsible for the so-called “regularization” of unrecognized villages, and carries out enforcement, demolitions, and evictions. In recent days, however, the body has sent employees to distribute Arabic-language materials on how to deal with the pandemic. According to the Authority, its staff were tasked with identifying the needs of the Bedouin population.

The unrecognized village of Atir (Activestills.org)

The head of the Bedouin Authority, Yair Maayan, told Local Call that all its activities have been frozen, including demolitions, and that “all employees are working with the population in order to try and prevent illness.” In a highly unusual move, Maayan wrote to the Finance Ministry after its inspectors handed out demolition notices in one of the villages, asking them to halt all such activity. Rather than carrying out demolitions and evictions, he wrote, the department should instead “focus on raising awareness and reducing coronavirus infections.”

Nonetheless, Haia Noach, executive director of the Negev Coexistence Forum — one of the groups that called on the state to stop demolitions — says that while the Bedouin Authority understands demolitions, it knows nothing about public health. “It’s an abandonment of the community to let these people [in the Authority] deal with the situation,” she says.

Early on in the crisis, Israeli schools shuttered and the Education Ministry set up national online broadcasts so that students could learn from home. But the plan clearly did not take the Arabic-speaking population into account, says Dr. Sharaf Hassan, who heads a committee that assesses Arab education. “They didn’t think about the gaps between Jews and Arabs. Around a third of Arab students don’t have the technology needed to access the lessons.”

About half of Palestinian-Arab students in Israel are not taking part in distance learning, and half live below the poverty line, according to Hassan. Moreover, he adds, not all families have access to a computer, let alone reliable electricity or internet.

“The lack of preparedness for an emergency situation is down to long-term discrimination,” Hassan says. In the event that distance learning needs to continue for an extended period, the government needs to ensure that students with no internet access can still receive an education, by providing them with routers and computers.

Access to information about the pandemic has also been an issue. “It took a while for people to realize that the school cancelations were not due to a holiday,” says Huda Abu Obeid, an activist and resident of the Naqab. “There wasn’t enough information in Arabic. Medical organizations began distributing guidelines themselves, out of a sense of duty. It’s worrying.”

“We need a task force that includes doctors who know the community and will come up with solutions,” says Noach. “The state needs to take responsibility.”

Meanwhile, al-Aasem proposes rapid provision of essential services, such as a medical clinic, even if only temporary. “If they recognized the villages and provided them with basic infrastructure, we’d be able to prevent this disaster,” he says.