Cote d’Ivoire’s president, Alassane Ouattara arrived in Israel late on Saturday evening, his first official visit to the country as leader of the West African nation. Ouattara’s visit comes exactly 50 years after independent Cote d’Ivoire’s first president, Félix Houphouët-Boigny, visited the country. But it also comes just as Israel launches a major crackdown on African nationals, including Ivorians, it says are illegally living in the country.

During his four-day trip, Ouattara is due to meet key officials, including Prime Minister Benjamin Netanyahu and Defense Minister Ehud Barak, before attending later this week President Shimon Peres’ annual Presidential Conference, where he will be the keynote speaker. On Sunday, Ouattara was welcomed at the President’s Residence by Peres, fresh off the heels of a trip to Washington where he received the highest medal of honor possible from U.S. President Barack Obama. 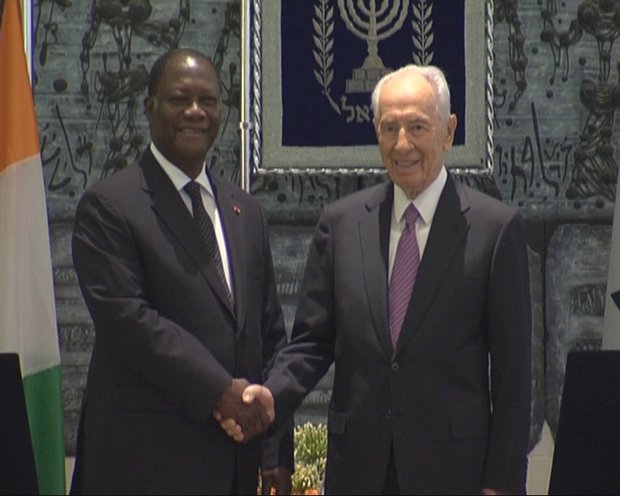 Speaking alongside Peres, Ouattara highlighted what he called the long-standing relations between the two countries:

We have the ambition and the intention to reinforce fifty years of cooperation.  And we expect a lot from Israel, that it will help us accelerate the growth and development of our country.

Also on Sunday, Ouattara and his delegation toured Israel’s national Holocaust museum, Yad Vashem, commemorating the murder in Europe of some six million Jews more than half a century ago. 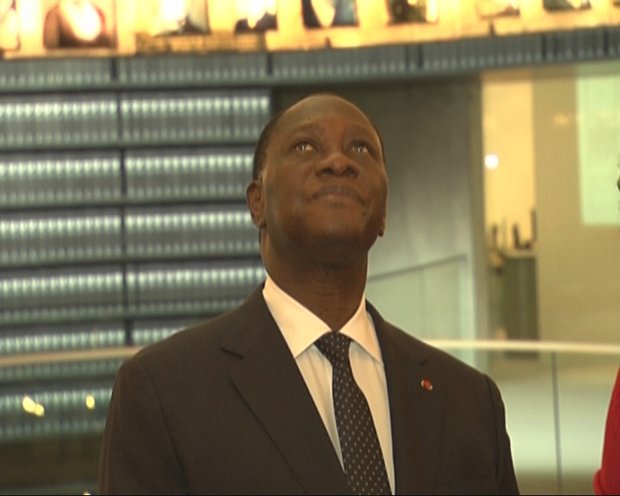 Ouattara declined an interview request, but his travelling press officer noted the leader was feeling emotionally overwhelmed by the tour.  It is protocol for visiting heads states to receive such tours, commemorating Europe’s bloodiest genocide in modern history and honoring those who died. But some say Ouattara’s biggest challenge back home will be doing more to protect those who are trying to stay alive.

People like Bernard Abet, who left Cote d’Ivoire 15 years ago, and has been in Israel since.

After the election, one of my brother was killed, and I don’t even know which party killed him.  My mom and sister ran away and I’m still looking for them. I went to the Red Cross, but they told me to ask for assistance from Magen David Adom.

Question: Do you feel safe to go home?

Yes, if he, if President Ouattara, does more. Ya, of course. And I know that he will do more so that the country will be safe. 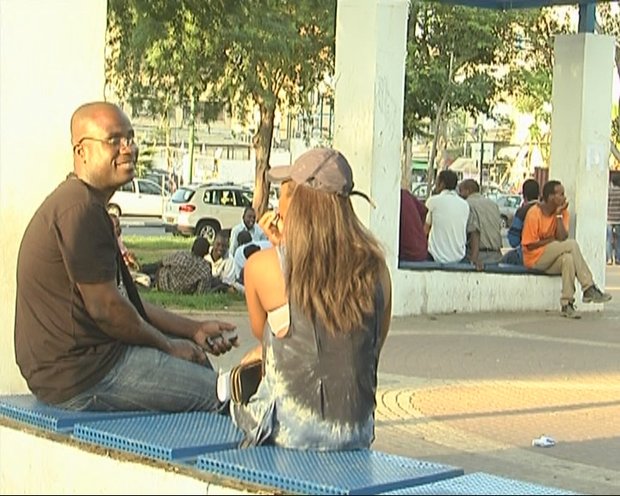 Abet has four daughters and a wife, whom he has not seen in more than a year. They, too, were in Israel, but have since gone to Ghana, where he says they are currently living. He hopes to join them soon. He says he appreciates the Israeli people and respects the Israeli government. He understands why it is carrying out the deportations, but does not support the way it has gone about doing it. According to Abet, in recent days, one woman from his community was arrested, along with her 4-year old child who was pulled out of school.

I don’t want to stay here forever. I never did. I want to go back to Cote d’Ivoire. But we need a little more time to see if the situation remains stable. So they should give us more time, and treat us right. Doing that to people, to children, treating them in that way, like criminals, that’s not right.

Abet’s friend Sheif, strolling through the park with his 2-year old son, isn’t waiting.  He’s been in Israel for 17 years, speaks fluent Hebrew, French and English, but says he won’t expose his son to that sort of pyschological trauma:

I don’t want him to experience that, to have him cut out of my arms like they did to that lady, to have him yell, ‘Abba! Abba!’ No, I’ll pack my things and leave before that.

But for some, like Abi, leaving is not an option.  She came to Israel only seven years ago. Entering on a tourist visa to attend a business management course in Haifa, she stayed when her brother was killed back in Cote d’Ivoire amid the violence. She starts talking about him, then stops:

I prefer to keep that there. Over there. I prefer not to think about it. No, I can’t go back. I can’t.

Bernand, Sheif and Abi are but three out of some 800 nationals of Cote d’Ivoire currently in Israel. The government last year lifted the collective protection it had granted them during the war in their country. And on Tuesday, Ouattara is due to meet many of them.  Bernard, who is very excited to see Ouattara and “his French Jewish wife,” intends to ask him to pressure Israel to allow them to stay longer. But ironically, Ouattara’s visit comes just as Israel for the first time began deporting African nationals back to their countries, starting with South Sudan. 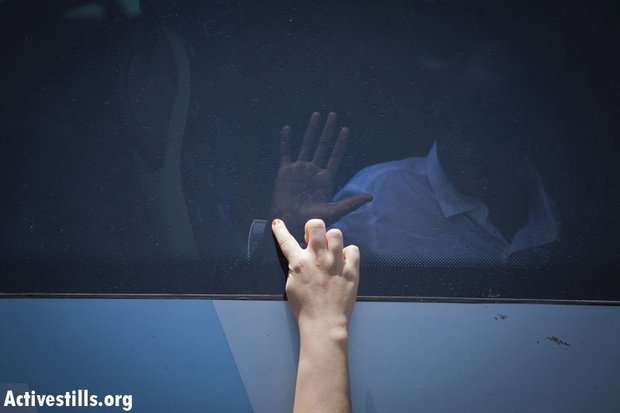 Ouattara’s arrival in Israel marks is his first official visit following a lengthy and internationally publicized power struggle for the presidency. Israel for years supported Ouattara’s predecessor and rival, Laurent Gbagbo, a self-declared Evangelical Christian with strong ties to the Jewish State. To the dismay of France, such support, like the supplying of unmanned drones – some say – elongated Cote d’Ivoire’s internal ethnic conflict, which left thousands dead, some half a million displaced, and much of the necessary infrastructure destroyed. Those who visited to Israel along with President Ouattara hope Israel’s high-tech entrepreneurship and agricultural know-how could help change that, at least according to the chairman of Cote d’Ivoire’s Chamber of Commerce, Jean-Louis Billon:

Our country is a country with a great potential, and the technological level of Israel in agriculture, in technology, in communication, in security, in all aspects of the economic life is important for us to gain and to learn from.

In a sign that the economy of Cote d’Ivoire may be recovering, Ouattara announced just days ago the resumption of payment on Eurobonds, halted when post-election violence slashed cocoa exports and drained the government of tax revenues. When leaving Israel, it’s expected he and his delegation will take back home millions of dollar’s worth of new contracts, part of his government’s plan to stabilize and strengthen the country.  Some say that’s promising, so long as Ouattara can keep the violence from flaring up again.

Last week, officials in the commercial capital Abidjian said they failed a coup attempt by pro-Gbabgo military exiles. If he wants his countrymen currently in Israel to return back home, he is going to have to show them that its safe. To do so, he’ll have to stay alive, and lead by example.