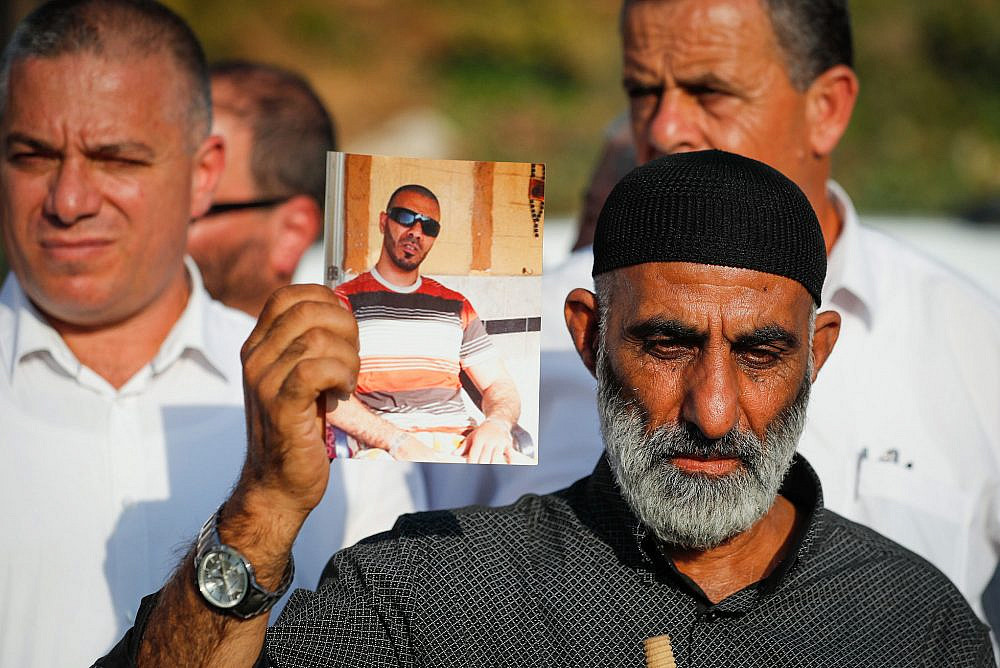 Palestinian citizens of Israel protest outside the Prime Minister's Office in Jerusalem against gun violence and organized crime in their communities, October 10, 2019. (Yonatan Sindel/Flash90)

Four years ago, in early September, I woke up in the middle of the night in Umm al-Fahem to the sound of machine guns. Afraid and baffled, not knowing where the shots were coming from or who they were being fired at, I called the police to report a crime. It took the officers two hours to make their way from the police station, which is a 15-minute drive away. When they finally arrived, they collected the ammunition in a clear plastic bag, and waved it in front of children looking on at the scene.

These kinds of incidents have persisted despite the Israeli government introducing several programs over the years to help eradicate crime across the country. In many Palestinian cities and towns in Israel, citizens still go to sleep to the sound of gun shots.

In a response to a freedom of information request received in November by Gun Free Kitchen Tables, a coalition of organizations seeking to restrict arms proliferation in Israel, the Israeli police stated they do not have official statistics on how many citizens have been killed or wounded by guns, indicating that the issue is not a high priority for law enforcement. But based on data gathered by Palestinian civil society groups and local press, an estimated 82 to 89 Palestinian citizens of Israel have been killed in violent criminal incidents this year alone, up to 15 of whom were women.

In the wake of these killings, Palestinian citizens and community leaders have been pressing the government to take action. Subsequently, the Special Committee on Eradicating Crime in Arab Society, chaired by Palestinian MK Mansour Abbas of the Joint List, was tasked with promoting a plan to flatten the crime rates in Palestinian society.

An inter-ministerial task force, created in October 2019 by the Prime Minister’s Office, presented Abbas and the National Council of Arab Mayors with a policy proposal in August, which suggested curbing criminal activity by improving the state’s relationship with Palestinian citizens. It included recommendations such as increasing surveillance, and recruiting more Muslim Palestinian men into the police force and national service, an alternative to military service.

Abbas has since spoken in support of the plan, describing it as a “good starting off point” and urging Prime Minister Benjamin Netanyahu to adopt it. But despite Abbas’s praise, the proposal is, in fact, severely flawed. Rather than investing in social services and offering original solutions that center rehabilitation in Palestinian society, it lists outdated recommendations that are merely tools by which the state can tighten its grip on Palestinian citizens under its colonial rule.

The document denies the state’s role in the escalation of violence and crime in Palestinian communities, ignoring its discriminatory economic and social policies and mechanisms of enforcement. Instead, it places most of the blame on the victims themselves, treating the problem as intrinsic to Arab society. 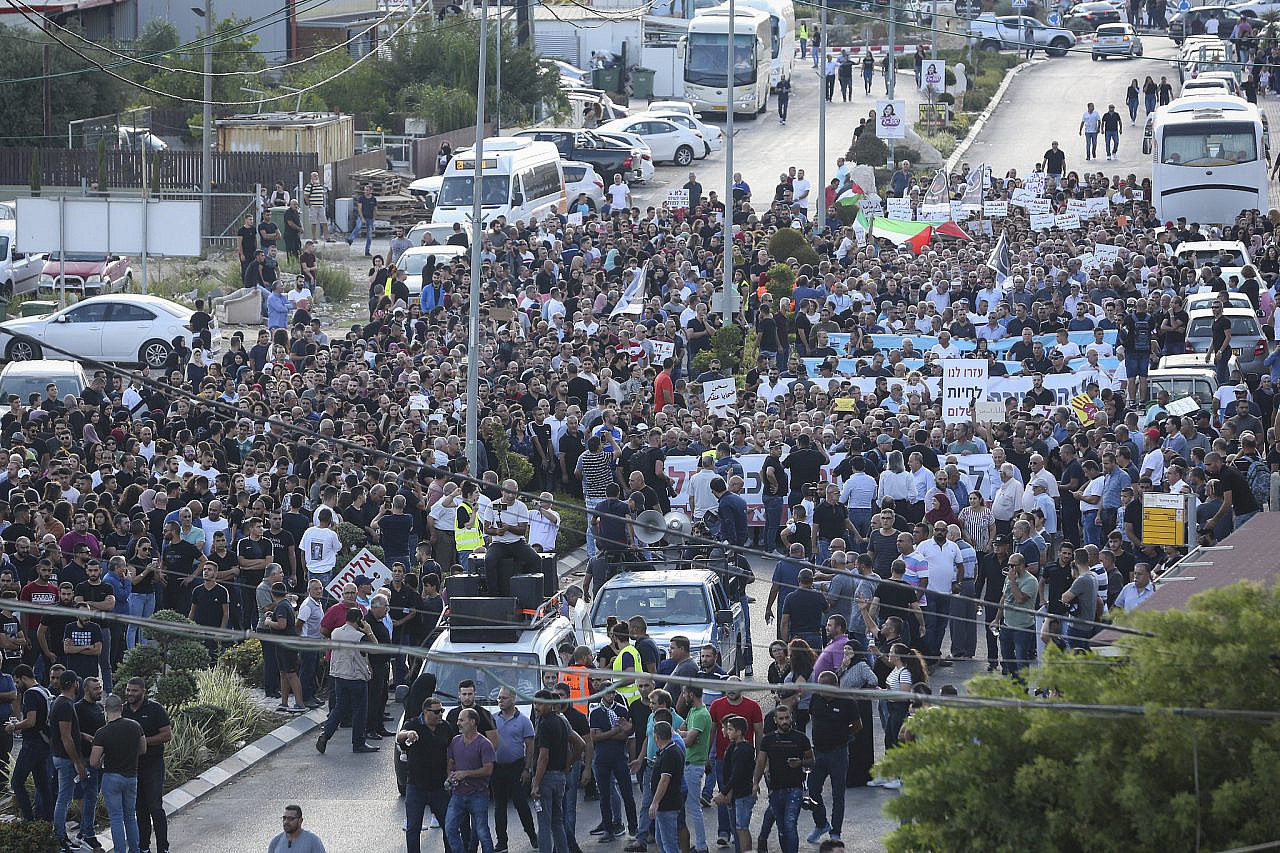 Thousands of Palestinian citizens of Israel protest against gun violence and organized crime in their communities, in the Palestinian town of Majd al-Krum in northern Israel, October 3, 2019. (David Cohen/Flash90)

Although the report claims to be innovative, stressing throughout that it does not intend to do “more of the same,” it adopts methods and recommendations from previous plans that have proven to be a failure both in Israel and globally, such as opening more police stations and increasing surveillance. Moreover, evidence from within Israel shows that the idea that more police leads to less crime is a myth.

In the past decade, Israel has established 14 police stations in Arab townships and 13 police posts, four of which are intended to be expanded into stations. However, a recent report by the Palestinian youth organization Baladna shows that the number of homicides per year in Palestinian townships had in fact multiplied by about 1.5 between 2011 and 2019. Perhaps the most striking finding of the Baladna research is the rate of unsolved murders among Palestinian citizens: between 2014 and 2017, less than a third of murders in the community were solved.

The only “novel” suggestion the new government plan introduces is to use home demolitions as a means of deterring crime organizations — a controversial measure that Israel also implements across the occupied territories to forcibly transfer Palestinians. This practice has already been adopted by the Lydd municipality, which announced in October that it will now work to expel families involved in criminal activity from the city. According to its statement, “gun violence among the city’s Arab sector is one of the leading reasons for negative migration.” In other words, the municipality is concerned about a decrease in the city’s Jewish population, and its solution for ensuring Jewish dominance is to simply remove the deviant Palestinians.

After Israel’s establishment in 1948, Palestinians who remained within its borders were placed under military rule for almost 20 years. Though they were recognized as citizens, the state has treated them as “enemies” from within ever since. This classification intensified during the Second Intifada in 2000, when police killed 13 Palestinians in Israel with impunity and wounded hundreds more. Not a single officer was put on trial. 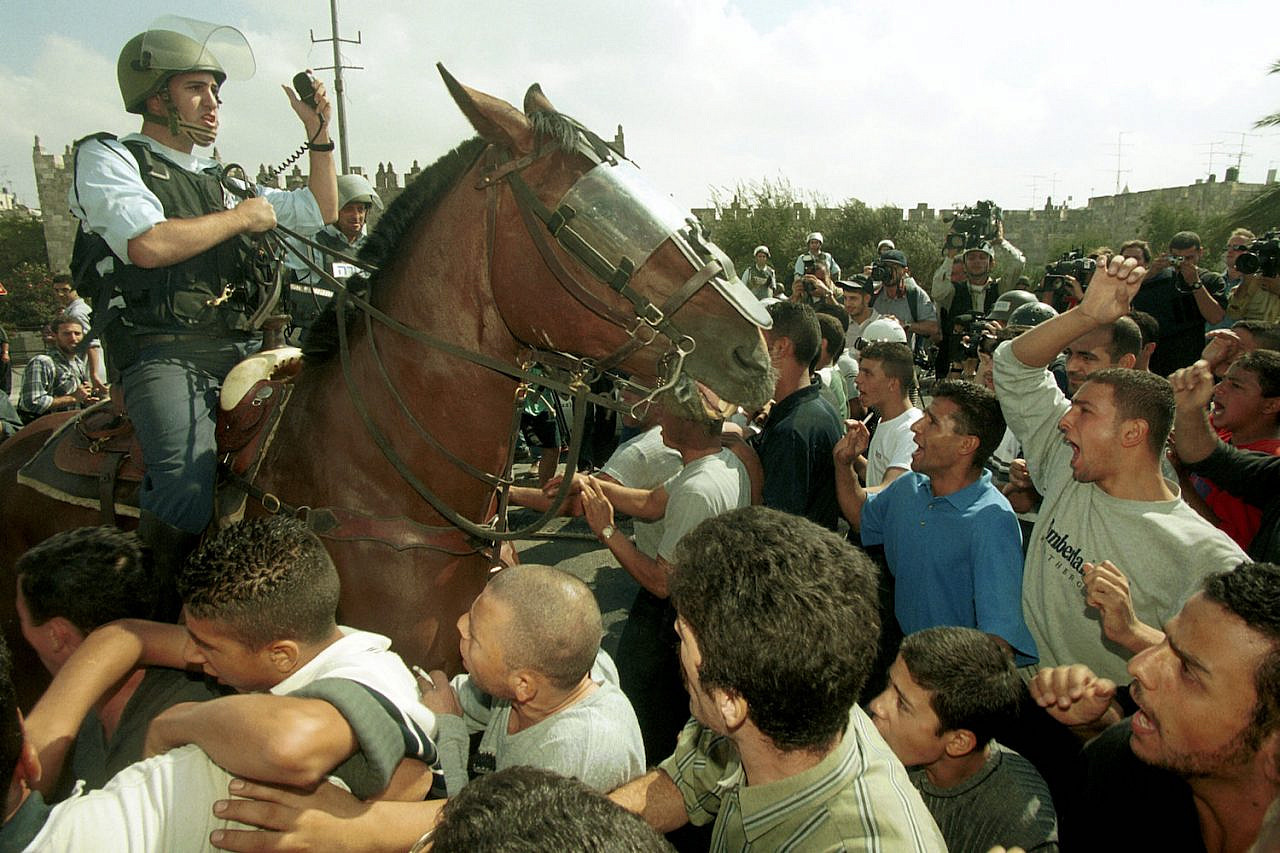 An Israeli police officer on horseback rams into Palestinians citizens at a protest during the first days of the Second Intifada, October 20, 2000. (Flash90)

In the aftermath of this pivotal tragedy, the government tasked the Or Commission with investigating the killings, known as the events of October 2000. The commission’s final report, released in September 2003, lists a series of recommendations for improving relations between Israeli police and Palestinian citizens.

At the same time, reeling from the Second Intifada, the state — and by extension the police — made it a priority to quash future political uprisings among Palestinian citizens. This led the authorities to neglect law enforcement against criminal offenses, which in turn allowed “lawless” zones to fester in Palestinian townships. Although some community initiatives tried to fill the enforcement vacuum, they were largely unsuccessful.

As a result, crime and violence increased in Palestinian communities, especially those involving guns and unlicensed arms trade; according to Aman, the Arab Center for Safe Society, 1,466 Palestinian citizens were killed between January 2000 and July 2020. Now, the state is using these lawless zones as an excuse to expand police presence in Palestinian townships. 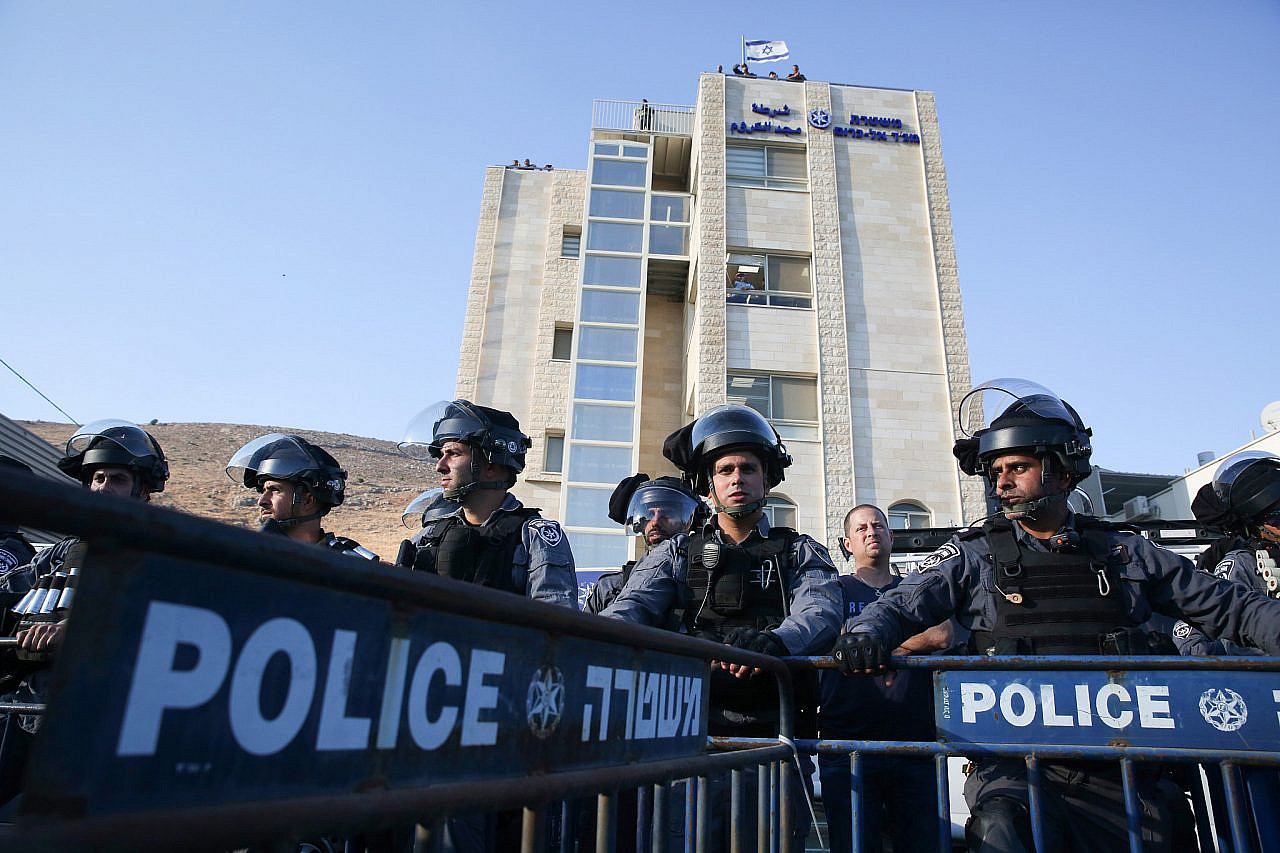 Israeli police at a protest attended by thousands of Palestinian citizens of Israel protesting against gun violence and organized crime in their communities, in the Palestinian town of Majd al-Krum in northern Israel, October 3, 2019. (David Cohen/Flash90)

In lieu of the Or Commission’s goals, the government enacted various plans to integrate Palestinian citizens into Israeli security institutions. Government Resolution 922, initiated in 2015, is meant to reduce inequality between Jewish and Palestinian communities through economic investment; the program has recently been extended through the end of 2021. Another program called “City Without Violence” specifically focuses on eradicating crime across the country, and has been implemented in 10 Arab localities, including in big cities like Umm al-Fahem, Nazareth, and Rahat. Government Resolution 1402 from 2016 calls for expanding and reinforcing police presence in Palestinian locales.

As part of these efforts, Israeli authorities have tirelessly attempted to normalize the voluntary recruitment of Palestinian citizens into law enforcement as a way of “integrating” them into Israeli society. Since Palestinian citizens are not drafted into the Israeli army, the government began encouraging Arab youth to join the national service. Today, the program is overseen by the National Service Administration, a body under the Prime Minister’s Office. The program assigns recruits to work for 40 hours a week in hospitals, nursing homes, and other public institutions, as well as in some security roles. Israel has especially been encouraging Palestinian Christians to enlist in the military and police — a blatant attempt to divide the Palestinian community by creating a hierarchy of status based on religion, rather than national identity.

The tactics Israel has been using to recruit Palestinian citizens to the national service revolve around two key elements: public security and economic empowerment. The first has been especially evident in the police’s response to the coronavirus crisis — it has been trying to whitewash its history as a violent and militarized authority by appearing as a friendly force that ensures community safety across Palestinian cities and towns. 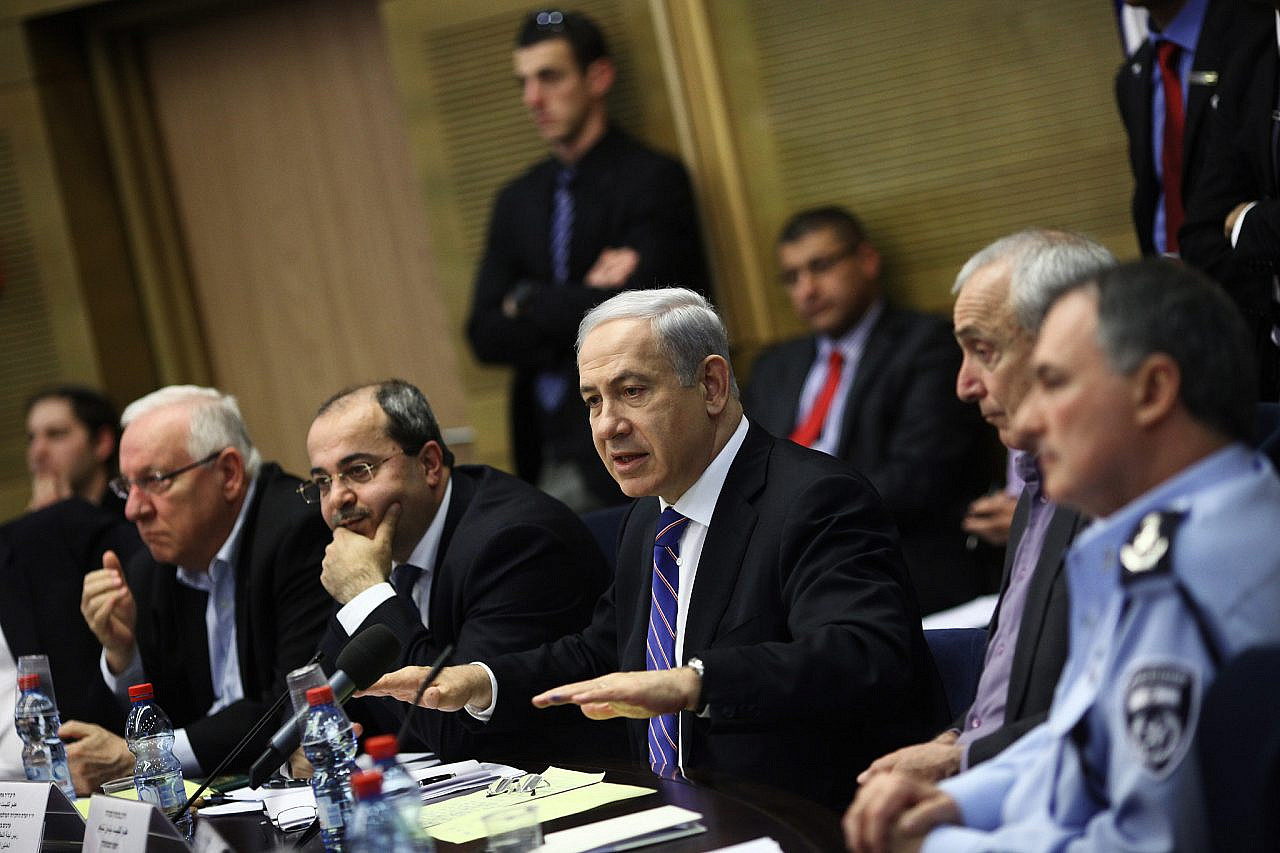 Israel’s Prime Minister Benjamin Netanyahu attends a parliamentary committee of inquiry session devoted to the problem of criminal violence in Palestinian communities in Israel, at the Knesset in Jerusalem, February 13, 2012. (Kobi Gideon/Flash90)

In terms of economic gains, the state is using national service as a way to make up for its systemic neglect, offering individual employment opportunities to Palestinian youth for up to NIS 770.55 a month in compensation, with the promise of benefits upon the end of their service, while the average monthly wage in Israel as of May is NIS 11,459, and the minimum wage stands at NIS 5,300. According to Israel’s Labor Ministry, unemployment levels among Palestinian citizens have reached 30 percent since the coronavirus outbreak in March, and the National Insurance Institute estimates that the percentage of Arab families who live below the poverty line has risen from 37 to 42 percent under COVID-19 (this is after considering income from unemployment benefits and other government grants due to the pandemic).

More of the same is a losing game

The crime rate among Palestinians citizens of Israel is about 8 times higher than that of Jewish Israelis, and 5 times greater than among Palestinians in the West Bank. Despite the increase in crime and gun violence in Palestinian townships, it seems that the authorities are not interested in combating these types of crimes.

Apart from a few external consultants, the latest proposal presented to the government did not include any input from Palestinian professionals. And although the drafting of the proposal took about a year, Palestinian political representatives were given only a few months to discuss its recommendations. This exclusion of the Palestinian community from a plan that primarily affects their everyday life is just another example of how the state dismisses the legitimacy and agency of its Palestinian subjects.

Two decades ago, the Or Commission sought to depoliticize Palestinian citizens by integrating them into law enforcement and government services. Today, the state is operating with the same political agenda in mind when trying to combat criminal violence. Rather than address injustice at its root by investing in Palestinian communities, demilitarizing society, and ending police violence, Israel is merely attempting to eradicate unlicensed gun crime through the licensed use of violence.

Shahrazad Odeh is a human rights lawyer and researcher whose work focuses on gender ramifications within legal systems. She is involved with various research and activist groups focusing on demilitarization and eradication of gun violence in Palestinian townships.