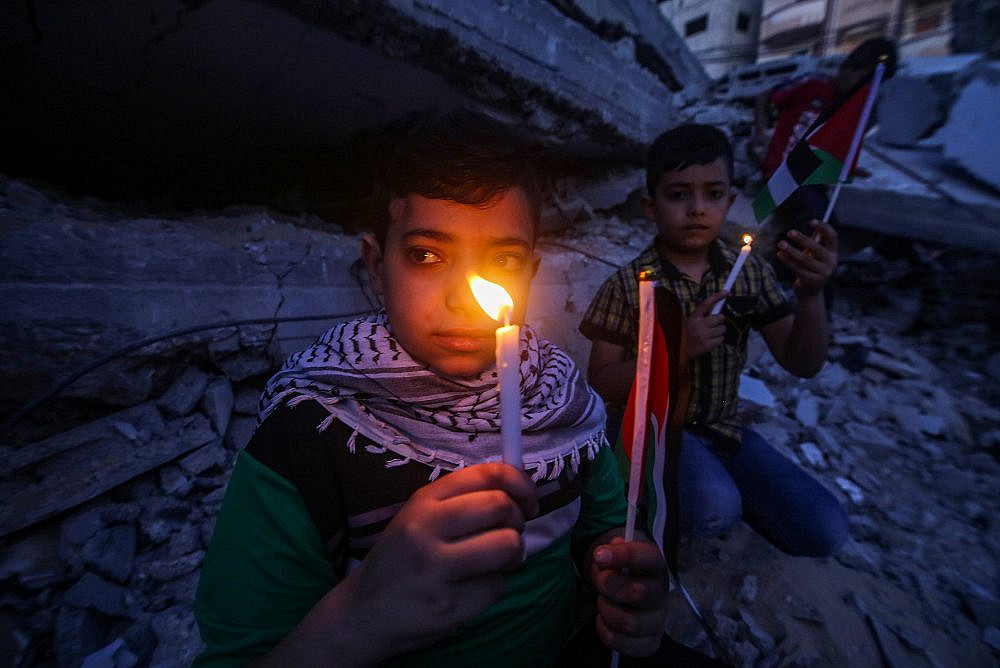 Palestinian children light candles during a protest near destroyed buildings in the southern Gaza Strip city of Rafah, May 25, 2021. (Abed Rahim Khatib/Flash90)

This year was unlike any other I can remember from my decades of defending Palestinian children’s rights. Israel’s bombardment of the Gaza Strip in May, amidst a mass youth-led uprising across historic Palestine, sparked an outcry around the world, with more people than ever demanding Israel be held accountable for its violence toward Palestinians and calling for an end to its apartheid regime. It felt like our movement for justice, accountability, and liberation was finally in the world’s spotlight.

As of December 14, 86 Palestinian children have been killed in the occupied West Bank, including East Jerusalem, and the Gaza Strip, according to documentation collected by Defense for Children International – Palestine, where I serve as General Director. Israeli forces and armed Israeli civilians killed 78 of those Palestinian children. 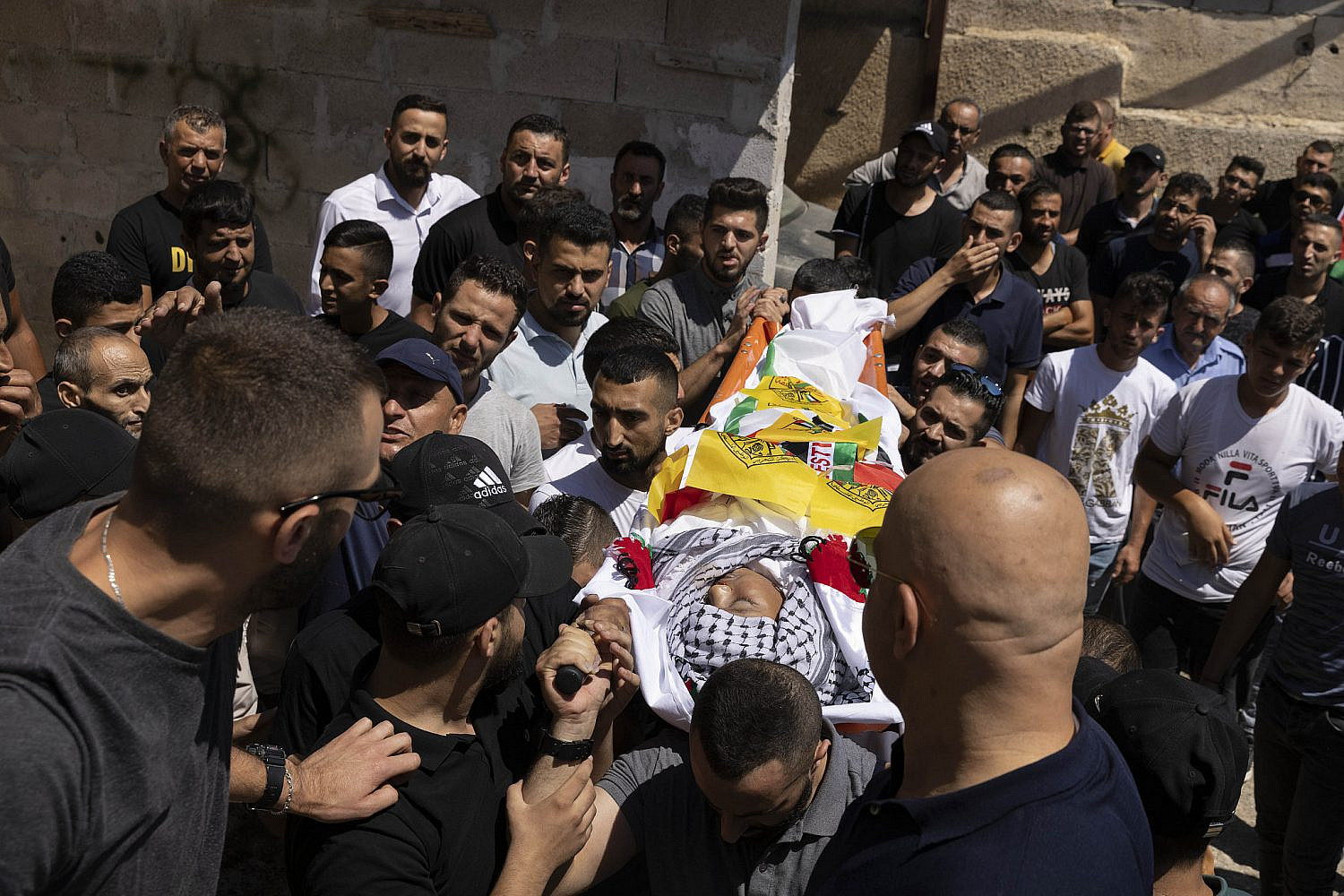 Funeral of 12-year-old Mohammed al Alami, in the village of Beit Ummar, north of Hebron. Alami was shot by Israeli soldiers while sitting in the passenger side of his family’s car as he and his father returned from buying vegetables. July 29, 2021. (Oren Ziv/Activestills)

Under international law, intentional lethal force is only justified in circumstances where there is a direct threat to life or a threat of serious injury. However, evidence collected in DCIP’s investigations suggests that Israeli forces regularly use lethal force against Palestinian children in a manner that may amount to extrajudicial or wilful killings.

One of these children whose life was stolen by an Israeli bullet is Obaida Jawabra, who was killed at the mere age of 17. Obaida is recognizable to thousands of people around the world because in 2019, DCIP produced a short film about his experience in Israeli military detention. By the time he was 15, Israeli forces had already arrested and imprisoned Obaida twice: first when he was 14 years old, and again the following year. Like the overwhelming majority of Palestinian children arrested by Israeli forces in the West Bank, Obaida was accused of stone-throwing.

Israeli soldiers shot dead Obaida with live ammunition in Al-Arroub refugee camp, near Hebron, on May 17. He sustained a gunshot wound to his chest during a demonstration at the entrance of the camp located near Route 60, the main Israeli highway that cuts through the West Bank to connect illegal Israeli settlements from Hebron to Jerusalem. A soldier standing about 70 meters (230 feet) away from Obadia fired the fatal shot, according to eyewitnesses interviewed by DCIP.

Obaida was set to graduate the following month from a vocational cooking course at the Talitha Kumi Community College in Beit Jala. And he was just three weeks shy of his 18th birthday.

This year marks DCIP’s 30th anniversary of promoting and defending Palestinian children’s rights. For me, this work is deeply personal. I decided to study law after visiting my older brother, who had been arrested by the Israeli military, in prison; I was 14 at the time. When I met him there with my parents, the Israeli guards forbade us from touching him; only my brother’s lawyer was allowed to get close to him, while I sat there wanting nothing more than to hug my brother. That was the moment I knew I would become a lawyer dedicated to helping Palestinians — like my brother — in Israel’s military courts.

As DCIP’s General Director, I believe we have a lot to be proud of. For three decades, we have defended Palestinian children in the Israeli military court system, connected them with psychological support after their release, trained children to document rights violations in their communities, worked with duty bearers to create child-friendly support systems and environments, advocated on the national and international stages, and more. 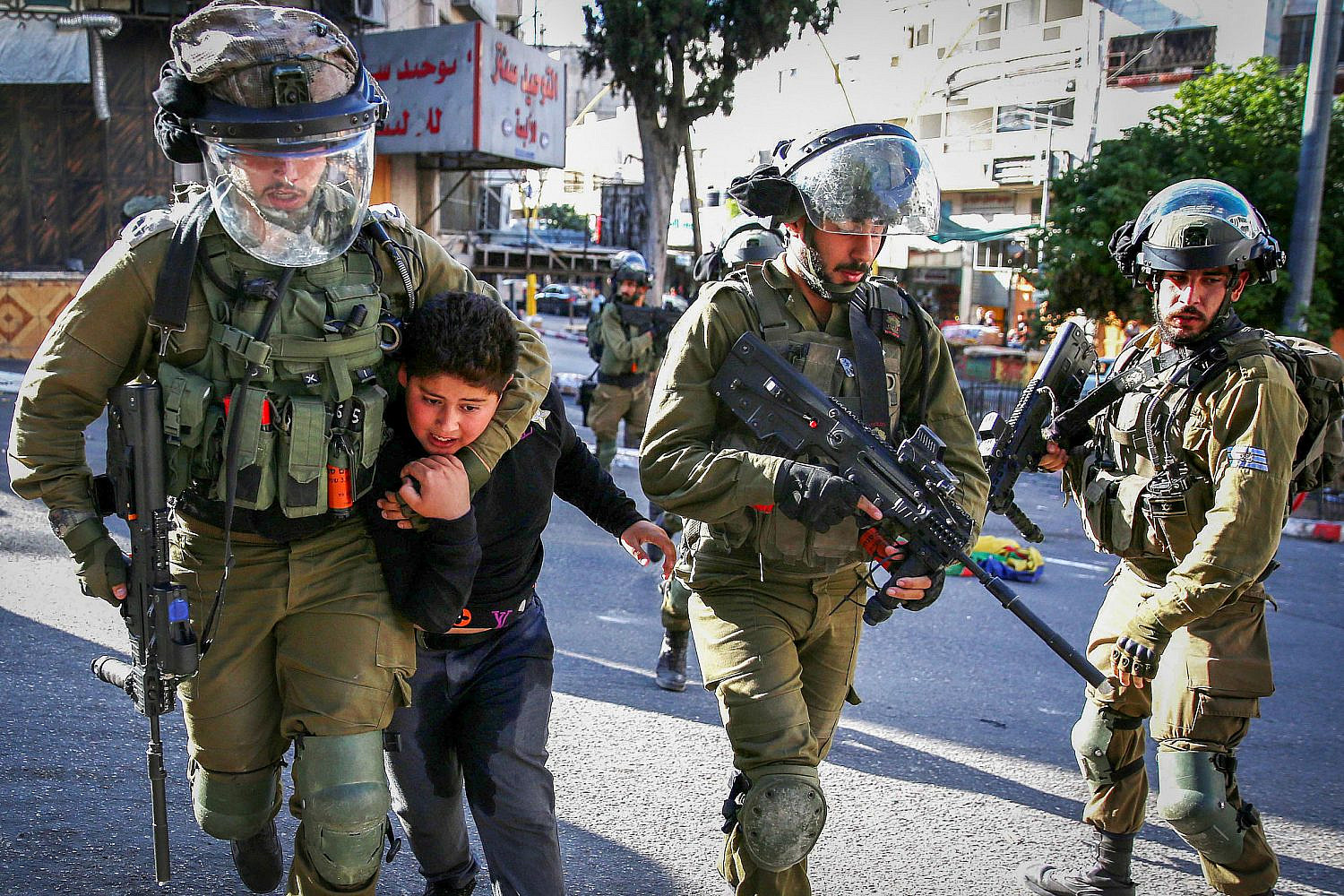 Israeli soldiers arrest a Palestinian boy as Jew-Israelis tour in the West Bank city of Hebron, during the Jewish holiday of Sukkot, September 23, 2021. (Wisam Hashlamoun/Flash90)

And yet, as I reflect on the deadly nature of this past year, I can’t help but sit with a disturbing number in my mind. Since 2000, the year the Second Intifada began, our team has documented the killings of 2,206 Palestinian children. That’s 2,206 Palestinian children, all with lives and stories as rich as Obaida’s, all with families that loved them, all that are deeply missed by their communities. More than 2,200 children who will never grow up to live in a liberated Palestine.

In those two decades, almost no Israeli officer or settler has been held accountable for these children’s deaths. Yesh Din, an Israeli human rights organization, reports that the chances that a complaint filed by Palestinians to Israeli authorities over alleged harms or violence by soldiers will lead to an indictment is 0.7 percent.

Meanwhile, instead of holding their forces accountable for the killing of Palestinian children, Israeli authorities have decided to criminalize the kind of work that DCIP leads. For years, a network of pro-Israel civil society organizations, with the support of the Israeli Foreign Affairs Ministry and other government agencies, has pursued a relentless campaign of delegitimization and disinformation against DCIP, claiming that our work to protect children according to international law amounts to “terrorism” or “antisemitism.”

While such attacks are nothing new to us, the Israeli government has now designated DCIP and five other Palestinian civil society organizations as “terror groups” — a clear escalation that makes our work for Palestinian children’s rights not just more difficult, but extremely dangerous for our staff and the communities we represent. 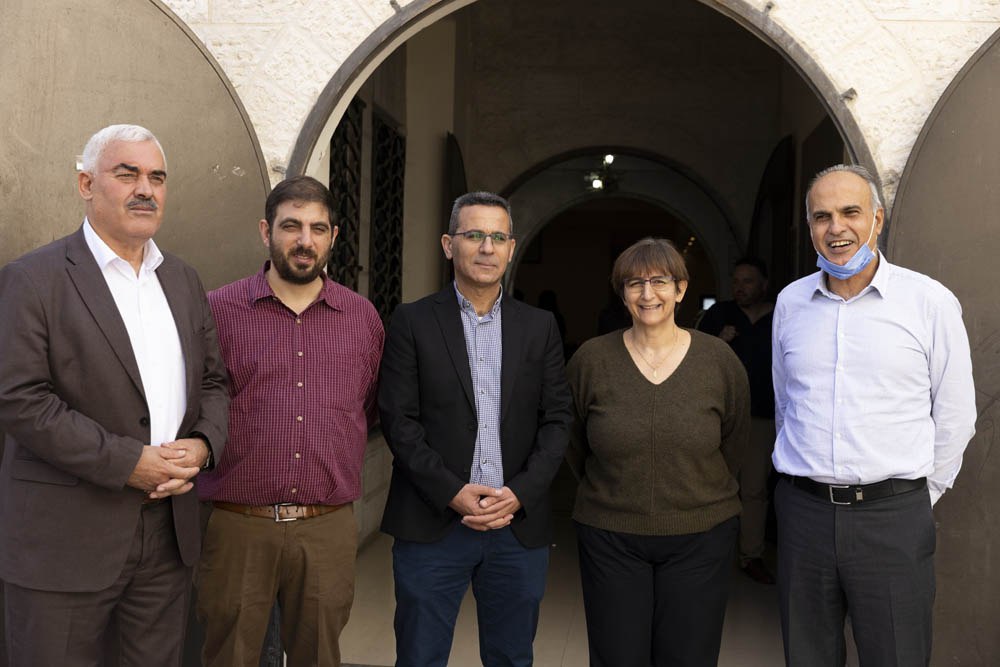 While Israel’s allegations are unsubstantiated and distort critical factual and legal elements of our work, its actions are nonetheless negatively impacting the ability of organizations like ours to deliver critical assistance to Palestinians and to advocate for their rights. And as long as the international community allows Israeli authorities to act with such impunity, it is unlikely that any Palestinian, least of all children, will find justice for the harms perpetrated against them.

This is why we need the international community to use all available means to hold Israeli authorities accountable for their targeted attacks and repression of Palestinian civil society organizations like ours, and to act to end international complicity and support to Israel’s apartheid regime.

Khaled Quzmar is the General Director of Defense for Children International - Palestine.