Regarding the controversy over Mairav Zonszein’s ‘New York Times’ op-ed: An ongoing climate of fear and suspicion is not conducive to ‘vibrant democracy.’ It is unfriendly to left-wing protest over security matters.

Since my colleague Mairav Zonszein published her ballbuster op-ed “How Israel Silences Dissent” in the New York Times several days ago, there’s been – what a surprise – a backlash. There was one substantive counterpoint to the article, though, by self-described leftist Noah Efron in Haaretz, who wrote that the instances mentioned by Zonszein of threats, sanctions and violence against opponents of the Gaza war also disturbed him deeply, then he added:

Good point. So what’s the story – does Israel silence dissent or not?

It does. Not all dissent, of course, and Zonszein never argued such a thing, but what Israel does is prevent dissent from reaching the mainstream. The government in Jerusalem doesn’t do it directly – it doesn’t have to. The deed is done mainly by mainstream economic entities and the mainstream media acting on behalf of their customers, the Israeli Jewish public, which supports every last thing the government does in the name of security, such as Operation Protective Edge.

To illustrate: On August 22, a week before the war ended, “7 Nights,” the weekend entertainment magazine in Israel’s leading newspaper, Yedioth Ahronoth, ran a cover story titled “Prisoners of War” about the same subject Zonszein wrote about, but as a long feature article based on interviews, and with a lot more examples of silencing. An anonymous “senior figure in the [Israeli] entertainment world” said:

“Whoever understands marketing in the Israeli music business knows that today the big money comes from [contracts to perform for] municipalities, state-owned companies, cultural bodies funded by the government and by Mifal Hapayis [the national lottery] whose director is identified with the government. Any expression that is extreme or that contradicts the government’s official position is liable to lead to the cancellation of dozens of performances a year – at cultural events, municipal festivals, Independence Day celebrations, summer concerts and so on. …

Whoever understands is afraid, and whoever doesn’t understand – his managers are afraid. The people around the performer don’t leave him on his own – they brief him: which messages to put across when you’re a guest on [talk shows hosted by] Yael Dan or Dan Shilon, what to say when you’re doing an appearance at a hospital [for wounded soldiers or civilians], or when you perform for the soldiers. The general atmosphere is one of, ’We take you into our hearts and we’re not going to express our opinions now, and probably won’t express them ever.’

Here was a recent cover story in a very widely-read publication talking about how Israeli entertainers are pressured economically into toeing the government line, especially during wartime, as described by a source who spoke off the record obviously because he’s under the same pressure. So the silencing of dissent is being exposed for all to see – but does that mean the silencing doesn’t go on? It damn sure does, exposure or not.

What’s allowed and what isn’t

As Efron wrote, the mainstream Israeli media do report, and report critically, on violence and threats of violence against left-wing protesters, and on economic sanctions leveled against outspoken celebrities. Furthermore, as he also wrote, Haaretz, +972 and other relatively small left-wing media, as well as commenters on Facebook (except a few radical Israeli Arabs), are free to oppose the government and its wars to their heart’s content. So in these two ways, Israel does not silence dissent.

The way it does, though, is by prohibiting powerful moral criticism of the government’s “security” policy from reaching the mainstream. Gideon Levy got death threats and was hounded wherever he went not because of his columns in Haaretz, but because of his interview on the Channel 2 news while standing on a street in Ashkelon, where bystanders starting yelling at him on camera while one of the guest panelists in the TV studio threatened to walk out. Levy can slam away in Haaretz and live a peaceful life, but once he spoke his mind on Channel 2, the king of Israeli TV, he needed a bodyguard. 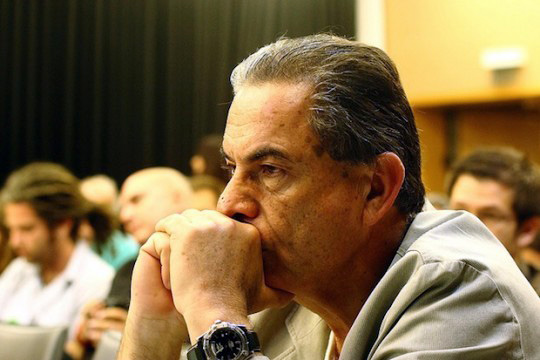 Watching Channel 2 news during the war was like watching “Salute to the IDF,” with the forlorn, muted exception of one regular panelist, leftist Amnon Abramovitch. Still, Abramovitch’s milder-than-usual sarcasm was too much for the right-wingers who shouted “terrorist” and “traitor” at him one night at the entrance of Channel 2’s studio, until a police officer put him in the car and drove him out of there.

It was the same experience listening to the radio, or reading Yedioth Ahronoth, not to mention the newspapers to its right (which is every newspaper but Haaretz). There were occasional, cautious voices against the extent of Israel’s bombing and the civilian casualties in Gaza, but there were none I’m aware of, except for that one abortive appearance by Levy, who were saying or even suggesting that the war was wrong, immoral, from its inception. And if there was such a voice I’m not aware of, or even two or three, I can almost guarantee that the host made it clear to his or her listeners that the speaker’s message was ridiculous if not disgraceful.

All this, of course, didn’t start with Operation Protective Edge. For some reason, right-wingers think Yonit Levy, Channel 2’s star anchor, is a leftist; during Operation Cast Lead in Gaza at the turn of 2009, she caught a lot of flak for supposedly doing something with her eyebrows that signaled disloyalty. I never saw it; what I did see, a year and a half later, was Yonit Levy wincing in unmistakable disapproval when thanking Judge Richard Goldstone for coming on the show to answer her questions about his just-released report.

I also remember driving back from the Gaza border during Cast Lead and hearing somebody on the radio giving a monologue about how the whole world was against Israel for defending itself, etc. etc. The voice sounded like that of hugely popular singer Shlomo Artzi, Mr. Sensitive Israeli Male, a noted mourner of the Rabin assassination. I checked, and it was Shlomo Artzi alright.

You can criticize Netanyahu, you can criticize the settlements, but when the cannons are roaring and you’re talking to Mr. and Mrs. Israeli Consensus, you don’t criticize, you endorse, or you will pay a price, as the few Israeli public figures who’ve challenged that rule have found out.

So yes, Israel silences dissent. The United States did the same thing in the years after 9/11, until the war in Iraq went bad. In mid-2004, country-rock singer Linda Ronstadt lauded Michael Moore’s anti-war, anti-Bush film “Fahrenheit 9/11” during a show in Las Vegas, and people in the audience started booing, throwing glasses and tearing up her posters, and in the end the owner kicked Ronstadt out of the hotel for “spoil[ing] a wonderful evening for our guests.” During that same time, Elton John said:

There’s an atmosphere of fear in America right now that is deadly. Everyone is too career-conscious. … There was a moment about a year ago when you couldn’t say a word about anything in this country for fear of your career being shot down by people saying you are un-American.

Things have changed a lot in America since then. But in Israel, the 9/11 atmosphere has become a more or less continuous thing, with wars every couple of years and a lengthening parade of so-called existential threats in between. An ongoing climate of fear and suspicion is not conducive to “vibrant democracy.” It is unfriendly to protest. In Israel, the political climate keeps protest safely on the margins.

And if any more proof is needed, remember the celebrated “town square test” conceived by national hero Natan Sharansky:

If a person cannot walk into the middle of the town square and express his or her views without fear of arrest, imprisonment, or physical harm, then that person is living in a fear society, not a free society. We cannot rest until every person living in a ‘fear society’ has finally won their freedom.

Think of Gideon Levy, Orna Banai or Amnon Abramovitch, think of most of the writers at Haaretz and all of us at +972, think of Ahmed Tibi, Haneen Zoabi or Richard Goldstone walking into a public square in this country and expressing his or her views, and ask yourself if, according to Sharansky’s celebrated standard, Israel is a free society or a fear society. Ask yourself if Israel silences dissent.