Attack comes just days after a number of Jewish extremists were served with administrative restraining orders barring them from the West Bank. 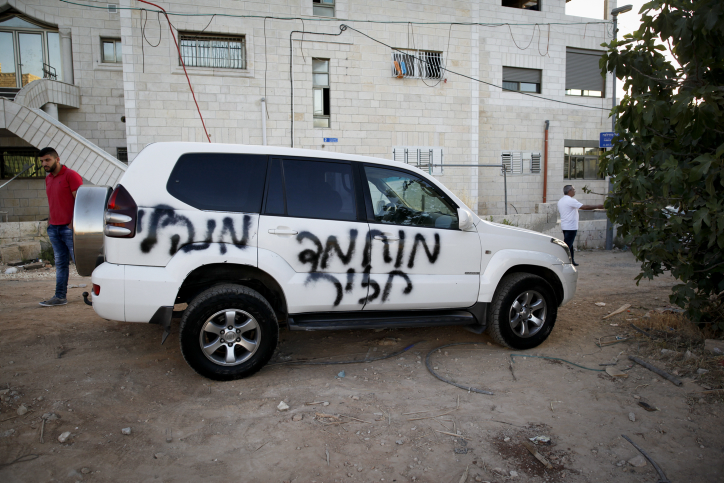 A Palestinian vehicle is vandalized in a ‘price tag’ attack by Jewish extremists in East Jerusalem, May 9, 2017. (Sliman Khader/Flash90)

Nearly 30 Palestinian vehicles were vandalized overnight Tuesday in East Jerusalem in an apparent “price tag” attack. The attack comes a few days after a number of Jewish extremists were served with administrative restraining orders barring them from the West Bank.

The attack took place between the Palestinian village of Shuafat and the Jewish neighborhood Ramat Shlomo in the northern part of the city. Some of the cars had their tires slashed, while others were spray-painted with graffiti reading “administrative price tag” or “Pikar the King” referencing Elkana Pikar, a settler who was recently served with a four-month administrative restraining order.

Over a dozen restraining orders barring Israeli citizens from the West Bank have been issued in recent weeks.

Two buildings in the northern Arab village of Na’ura were also vandalized overnight, with the words “administrative revenge” and “administrative price tag” spray-painted on them. Israeli police opened an investigation into both attacks.

While price tag attacks — a doctrine that targets Palestinians, religious minorities, and Israeli leftists in order to deter Israeli authorities from taking action against settlements — have been a staple for much of the past decade, few perpetrators have been brought to justice. Attacks began in 2008, when extremist settlers began uprooting olive trees, vandalizing cars, arson attacks against mosques and churches, and culminated in the murder of 16-year-old Muhammad Abu Khdeir in 2014 and the Dawabshe family in 2016.