Outsiders who wish for a return of the dictators are pushing against the inevitable tide of history. And Israelis who express a preference for Mubarak only contribute to the perception, widely held in Egypt, that the dictator was able to survive because he was supported by ‘the Zionists.’ 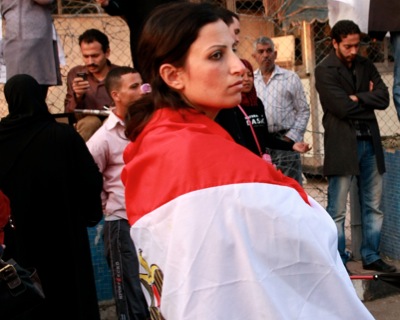 The Egyptian election results are in, and two-thirds of the vote went to the Islamist parties. According to the New York Times, 47 percent of the votes went to the Freedom and Justice party, representing the 84-year-old Muslim Brotherhood, which invented political Islam; and 25 percent to the Nour party, representing the fundamentalist Salafists. My colleague Larry Derfner writes that if he had known what the results of this first post-Mubarak election would be, he would not have supported the revolutionaries. He describes Islamist parties’ victory as a “demoralizing defeat” for “we liberals” and concludes that the Middle East has taken a “giant leap backward.”

Well. “We liberals” are citizens of the democratic state of Israel, which freely elected, as the largest faction in its governing coalition after the Likud, the quasi-fascist Yisrael Beitenu party. The head of that party, Avigdor Lieberman, is now the foreign minister. He cozies up to Vladimir Putin and once said that Israel should bomb the Aswan Dam. In our Knesset, we also have Kahanists and a large contingent from Shas, which is quite similar to the Nour party. So I don’t think we have all that much credibility when it comes to commenting on the election results of our neighbours.

More to the point, we have no say in the Egyptian revolution. Israel is not part of the discourse about the Arab world – by choice and by default. We removed ourselves from the discussion by tacitly supporting oppressive dictators like Mubarak, who crushed civil society in his country over a period of thirty years, and by refusing to end the military occupation of the Palestinian territories.

Who killed the liberal opposition parties of Egypt? Mubarak did – by jailing their members and refusing to allow them to run for parliament. The Muslim Brotherhood did sit in parliament, although it was subjected to periodic crackdowns by the secret police, so it understands the political system. In terms of votes, it benefits from being a known entity. The Brotherhood has nearly a century of experience in political organization. It has money, it is organized and it represents stability to millions of Egyptians who, while they were probably happy to see Mubarak gone, were tired of the revolutionary chaos. Beyond Tahrir, for most Egyptians, the army is a respected institution that also represents stability – much as the IDF is a respected institution for most Israelis.  Most Egyptians still believe that the army is with the people, despite all the evidence to the contrary. And so the fact that the Muslim Brotherhood and the ruling military junta struck a deal to cooperate also worked to the benefit of the Freedom and Justice party.

The Salafists, who surprised and shocked so many with their electoral success, benefited from both focused organization and a huge cash infusion from Saudi Arabia.

Then there was the liberal political coalition. They had no financial support from foreign governments, no long-established parties and no candidates with face recognition. They had five months to prepare for elections – to form parties from scratch, choose candidates, articulate a platform and then go out and campaign, while the chaos of the revolution continued. Egyptian blogger Sarah Naguib describes in this blog post some of the Herculean challenges the liberals faced going into these elections; in this podcast, Mahmoud Salem (aka the Sandmonkey), who ran as an independent candidate, describes the obstacles he experienced and voting irregularities he witnessed.

And yet, despite all these difficulties, the liberal parties won 30 percent of the vote.

Revolutions are messy, violent and protracted. The French revolution and the American revolution took years to achieve, and both were violent, chaotic affairs. The Egyptian revolution is only one year old and the situation will probably get worse before it gets better. But outsiders who wish for a return of the dictators are pushing against the inevitable tide of history. And Israelis who express a preference for Mubarak only contribute to the perception, widely held in Egypt, that the dictator who destroyed their civil society, impoverished them, spied on them, tortured them and humiliated them was able to survive because he was supported by ‘the Zionists.’

Hosni Mubarak is gone. He is not coming back. The Islamist parties have won a majority of seats in a rubber stamp parliament. The real power is still held by the military and this will continue to be the case for some time – a fact that might comfort Israelis who fear the Islamists. But if we’re going to assess reasons to fear for the Middle East, we Israelis don’t have to look very far. The danger is not with the Islamist parties. They have no love for Israel, but they have neither the power nor the will to express their dislike by mobilizing for war. The danger is with the Israeli governing coalition, which is passing anti-democratic legislation at home and behaving increasingly like non-rational players in the diplomatic arena.

In 1991, the Algerian military cracked down on the Islamists when they were poised to make a strong showing in the national elections. The result was a civil war that cost an estimated 200,000 lives. Surely no liberal – Israeli or otherwise – would wish for the Egyptian military to spark a civil war with a similar crackdown on the Muslim Brotherhood and Salafists.

One liberal Arab friend told me, “You Israelis have enough problems at home. You should mind your own fucking business.” And no liberal should think that 250 million Arabs are going to put their revolutions on hold because 7 million Israelis are worried about their security. We all need to get over Tehran Trauma: There is no Egyptian version of the Ayatollah Khomeini waiting in Paris for the right moment to fly to Cairo and co-opt the revolution.

When I was in Cairo last spring, I met a prominent Egyptian journalist – a liberal – who displayed an impressive knowledge of Israeli society and politics. He told me two things that I won’t forget. He said that there was not a single Israeli journalist who evidenced any true insight or deep knowledge of the Arab world. And he said that the Arab uprising was unstoppable.