I went to the weekly demo against the Wall in the Palestinian village Bil’in yesterday, after several months that I haven’t visited the West Bank at all (I try not to travel beyond the Green Line when it’s not for work). A colleague visiting from the U.S. joined me, and we arrived at the village shortly after noon.

Some internationals and a few Israelis gathered in the streets, and when the prayer ended we started walking towards the wall, a march which has become much longer since the army moved the route of the barrier closer to the ultra-Orthodox settlement Modi’in Ilit – the largest city in the West Bank – and returned the village some of its land. Beyond the wall lies “Green Park,” one of the two eastern neighbourhoods of Modi’in Ilit, also on farm land that belonged to Bil’in before it was confiscated by Israel in order to solve the housing crisis for the ultra-Orthodox population of Tel Aviv and Jerusalem.

Even if Israel were to agree to leave the West Bank, Green Park would not be evacuated. Even Palestinian negotiators agreed to have it annexed to Israel in exchange for equal territory elsewhere. Thus, the Palestinian people might one day be compensated for the land that was taken from Bil’in, but the people of the village – its owners – will not. This fact also highlights the paradox of the settlements: on one hand, Israel claims that settlements do not affect the final status agreement and can be evacuated at any time – a notion recently backed by U.S. President Barack Obama’s decision to give up the demand for a settlement freeze – yet in every round of negotiations, the Israeli government presents new facts on the ground as fait accompli, and demands that the proposed solution be adjusted to accommodate them. 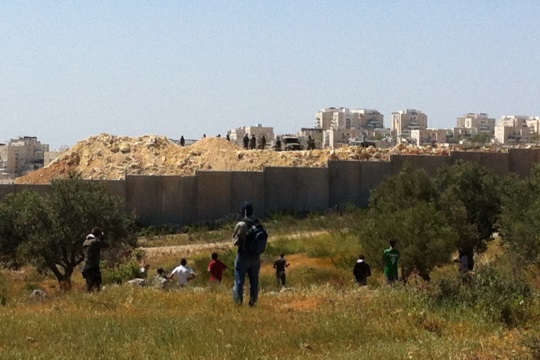 Palestinian protesters and IDF soldiers at the beginning of the weekly protest near Bil’in. The apartment buildings of Modi’in Ilit can be seen in the distance. March 29, 2013 (photo: Noam Sheizaf)

Nothings seems further away from the diplomatic game than a walk through the hills surrounding Bil’in under a surprisingly bright sun. It wasn’t the State Department or the European Union that rescued some of the village’s land, only the struggle of the local farmers, which entered its ninth year this month. Two of the village’s residents – a brother and sister – have been killed, hundreds wounded, arrested and imprisoned. But the people of Bil’in did what almost nobody else could – they stopped the growth of a settlement and pushed the wall closer to the Green Line.

On Fridays, there is an almost tangible awareness of village’s history in the air, whether it’s the number of international activists and visitors – at least two dozen this week — or the shop selling Palestinian flags and scarves in the center of the village. Right next to the wall, almost a mile from the edge of the village, there is a playground for kids, new and brightly collored, undoubtedly a “fact on the ground,” that is meant to demonstrate the village’s connection to those hills. I also noticed new terraces and plantations, while the root of the old barrier, which once separated Bil’in from its land, is gradually fading, now no more than a dirt road.

The protest itself is like most I’ve seen – a peaceful march to the wall, some singing and waving of flags, and a few dozen meters away, some shabab (youths) throwing stones at soldiers on the other side of the road. The army sprays the infamous putrid ‘skunk’ liquid across the wall in the general direction of the protesters. Further east, on a tiny ramp beyond the wall, a group of ultra-Orthodox teenagers gather to watch the action. This has also become a kind of ritual.

After several stones get closer to the soldiers, the army starts shooting tear gas at the protesters, which spread across the field. Later, a convoy of several army vehicle pass through a gate in the wall, and some soldiers start chasing the shabab. More tear gas is shot, and a grenade lands right next to where I’m standing with my friend. The gas is unpleasant.

I am told that the army hasn’t crossed to the other side of the wall in a long time. The shabab are blocking the road with stones as army jeeps pass by the playground – now engulfed in tear gas – and drive over the newly-formed plantations, as if to insult the locals’ efforts to reclaim their land. We recover from the effect of the gas and head back towards the village.

The drive back to Tel Aviv takes 20 minutes. Entering the city with its Friday morning crowd packing into cafes and promenades used to be the most shaking part of the trip to the protests, but this effect is fading too. 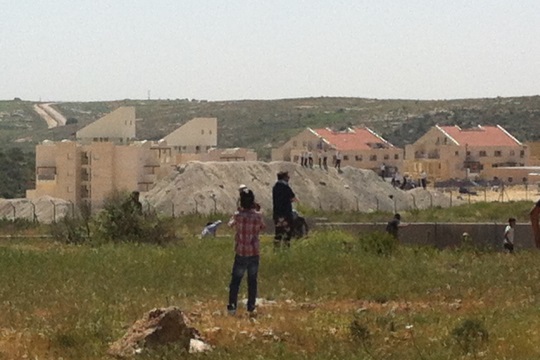 Ultra-Orthodox teens (in the distance) from Modi’in Ilit watch over the weekly protest in Bil’in, March 29, 2013 (photo: Noam Sheizaf)

Stories by +972 writers on Bil’in
A promise: My first time in Bil’in will not be my last
Among tear gas and injuries, Bil’in celebrates victory
Standing where Bil’in fence stood, change begins to sink in
Testimony: Soldier fired directly at Bil’in demonstrator killed in 2009
IDF on Bil’in: spins, half-truths and lies 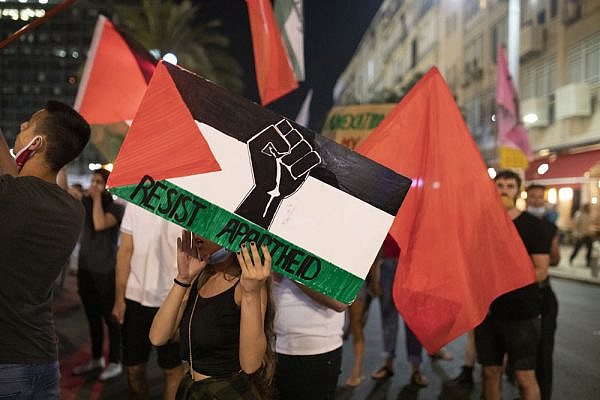