On the holiday of Shavuot in 1941, Iraq’s Jews experienced a pogrom that claimed over 180 lives and ended in mass looting. But there’s another story from the Farhud that often goes undiscussed: the bravery of Muslims during the crisis.

“The Farhud” / Foreword By Orit Bashkin (translated by Asaf Shalev)

Silently but not without some noise, a blessed thing is happening in Israel right now. The general category of “Mizrahiness” is falling apart into the stories of specific communities, cities, places, languages and memories: Iraq and Morocco, Aleppo and Oran, Ladino and Aramaic. All of them are asking to tell the stories of their Jewish communities. As part of this beautiful centrifugal process – which is being led by novelists, poets, historians, folklorists, literary and musical artists – the history of the Jewish community of Iraq is also crystallizing. This magnificent community has sprouted an amazing literature written by Jews in Arabic. In Iraq, the European education of community members did not prevent them from falling in love with Arab literature and culture, which were taught in the Jewish schools (both public and private). The love was preserved here in Israel as well. In Iraq, they also used the term Arab Jews, at times politically (to express support for the Palestinians) and at times culturally to connote Jews that love Arabic and Arab culture.

This love and the desire to integrate into modern Iraqi society were challenged starting in 1939. Part of the nationalistic Arab elites – and I stress, only part – sought to cooperate with Germany, as an enemy of England (as did anti-British forces in the liberation movements of India, in the Irish liberation army, and even in the Lehi, or Stern Gang). In April and May of 1941, Iraq experienced a military coup, led by Rashid Ali al-Gaylani. When the British forces were about to enter Baghdad (on the first and second of June), with the defeat of Rashid Ali’s forces, a terrible slaughter against the Jews of Iraq took place. A mob of discharged soldiers, military youth groups, corrupt cops, city dwellers – and on the second day, poor robbers and looters – took the lives of at least 180 Jews. The British forces could have entered the city earlier and saved the Jews but they decided to not get involved. The Farhud is at the center of a number of studies, but more importantly, it is rooted in the memories of members of the community. But what do we know about the Farhud? Unfortunately, most Israelis that are not Iraqi have never heard of this tragedy (except from the popular satirical show that recently made an ugly mockery of the event) because Iraq – despite its Westernized Jewish elites with ties to the global economic system through trade, banking and oil – is not part of the “Europe” that Israelis conceived of. There are pogroms and then there are pogroms. 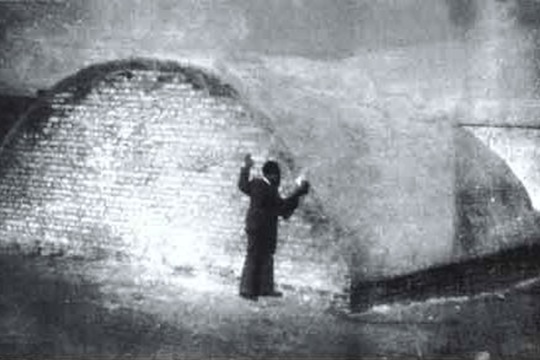 Mass grave of victims of the Farhud, 1941. (photo: Ministry of Education and the Ben – Zvi, Jerusalem)

In the collective memory of the Iraqi Jewish community, the Farhud is seen as a failure of the Arab-Jewish idea and as a moment in the penetration of Nazis into the Middle East through the influence of Haj Amin al-Husseini who took refuge in Baghdad for a while. But even here, the story is not complete, since portraying the Farhud as a pogrom against helpless Jews ignores the fact that Jews in Iraq fought against the Nazis and their influence. They wrote articles – in Arabic – about the crimes of the Nazis in Germany and of the Fascists in Italy. They collaborated with anti-Nazi Arab liberals and socialists. They voiced their opposition against teachers who spread Nazi propaganda at school and demanded they be fired. Germany was not able to screen propaganda films in Baghdad because the movie theaters – which were owned by Jews – refused to screen them. Jews resisted during the days of the Farhud as well. They poured hot oil on the rioters, threw stones, and hopped from rooftop to rooftop to save their lives.

And there’s another story from the Farhud that deserves telling: the bravery of Muslims during the crisis. The wealthy Jewish neighborhoods were not targeted in the onslaught. Those who were hurt were the poor Jewish neighborhoods. Those who were saved lived in mixed neighborhoods – often because their Muslim neighbors risked their lives to save them. Recollections of Jews, letters by Zionist emissaries, and police reports praise those neighbors and friends. A 70-year-old woman who called on all her Jewish neighbors to stay with her; Muslims who pretended to live in Jewish homes to protect Jewish property; a neighborhood hoodlum who not only hid Jews but also forced the grocer to bring them food; Iraqis who bribed rioters and threatened them with weapons – all in order to rebuff the mob. The stories show the Farhud was not only characterized by looting, murder and incitement but also by the keeping of certain social norms by which Jewish friends and neighbors were seen a precious family members, as well as by heroic and touching stories of rescue. Another story, exposed by my colleague Esther Meir, who has long worked on the Farhud and its memory, is that the Jews of Iraq did not want to immigrate to Israel after the danger subsided. Some of the younger generation, however, turned to more radical avenues – communism and Zionism.

It is a great honor to write a foreword to the recollections of the father of Oshra Shaib Lerer, Avner Izak Shaib. His voice expresses the culture, politics and neighborly relations of the community. I hope Israeli students will learn the history of the Farhud from multiple perspectives – and that they’ll remember not only the marauders and exploiters but also the neighbors and friends, from the Christian community party leader who after the looting in Basra implored the government not to harm the Jews, to the Shi’ite looter who came to steal Jewish property but pleaded with another looter not to stab a Jew and was stabbed herself. And I hope that the Farhud will not be the only story students will get to hear. I hope they also learn about the Arab-Jewish writers, the wonderful musicians, the communists and Zionists, and about the ways this culture was preserved in Israel, in the face of a state that forces assimilation and Westernization.

“The Farhud, ” As My Father Told It to Me / Oshra Shaib Lerer

I was four years old when the Six Day War broke out, the war that brought with it the hubris, the arrogance, and the “shufuni,” or “everyone, look at me.”

The books were the path back to his native language, which he so loved: Arabic. With the books came the stories of the city that just can’t be forgotten: Baghdad. The markets where he sold his merchandise. Skipping ahead a couple grades at the Muslim and Jewish school. The rooftops they climbed to sleep on sweltering nights. The alleyways and the bridge. The Zionist underground and the communist underground. And many more.

My father longed for the words and, to borrow a wonderful expression coined by Dudi Busi, rolled them on his tongue like he was asking to touch them and not just one more time – to touch them through the Arabic radio stations, the television programs, the prayers from the Qur’an during Ramadan and through the books.

Mostly, he came back to those three days of slaughter, robbery and looting that happened to the Jews of Iraq. Three days that are the microcosm of the complexity of being a Jew in Iraq on Shavuot of 1941. This week he recounted the story to his granddaughter:

In 1941, about a month ahead of the Shavuot holiday, the rule of the British Mandate in Iraq was toppled by al-Gaylani. On Shavuot eve, rumors spread that the Iraqi army was defeated and that English had returned to rule Iraq. The Jews celebrated the holiday and the victory in the streets and in the synagogues. Baghdad was in a state of anarchy as the English had yet take power and Nazi rule was crumbling. The poor people living on the other side of the Tigris took advantage of the situation and crossed the river and to rob, pillage and murder Jews. As news of the slaughter reached out neighborhood, we began to barricade our homes and prepare for self-defense: hot oil, stones, reinforcing the gates to the homes and more. Some of the Arabs, which I call “Righteous Among the Nations” protected Jews while risking their own lives.

My father returned that day from the market, told us about the terrible killing happening throughout the city in the Jewish neighborhoods, and said we must defend ourselves. We, who lived in the heart of the Muslim Arab neighborhood, climbed up on the roof and cried out for help. The aid came from our Muslim neighbor. With his encouragement, we jumped from our roof to his. As this was happening, the neighbor threatened his mother with a gun that if she will turn us in instead of helping, he will shoot her. We stayed at the neighbor’s house for two days of horror and he protected us and provided us with water and food until the rage faded away. Our house was pillaged but we were saved.

The regime in Iraq always knew how to strike a balance and protect the Jews throughout Iraq and the same happened this time.

I was only 12 years old then but the event led me to later join the Jewish communist underground, believing that this movement and its ways will improve our lot. Later on, I joined the Zionist underground.

In the Zionist underground I was given the name Avner, which I have kept to this day. I immigrated to Israel under a false identity because I was wanted in Iraq. If there is one thing I learned from the days of the Farhud is gratitude to the Righteous Among the Nations that saved us and the self defense by Jews who would not surrender.

This is my father who called himself an “Arab Jew” before it became a political statement, out of love and appreciation for the Arab culture in which he grew up. It was a love he tried to pass on to us, his children.

To my father, Avner Izak Shaib, who taught me pride and wisdom, I dedicated the song “No, It Is Not I Who Would Cry” by Mohamad Abdel Wahab.

Read this article in Hebrew on Café Gibraltar.