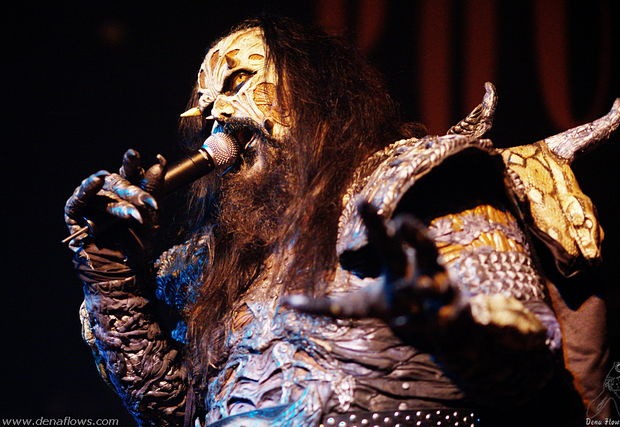 Last week, during the recent flare up with Hamas and the barrage of rockets from Gaza, Barak said that “anyone who came to Israel in order to build his national home here after 2,000 years also has to know how to withstand tests. Anyone who wants absolute quiet should go to Finland.”

Upon hearing the comments, Lordi held a press conference to address the issue. Mr. Lordi, the band’s lead singer and costume designer, seemed to be the angriest. “Barak has obviously never heard of Lordi and our music. We’ve rocked buildings so hard in downtown Helsinki that they’ve issued tsunami warnings in the fjords of Scandinavia”.

Another band member, apparently called “OX”, but who could not be recognized due to 3.6 tonnes of makeup, said that “I find it rich that Barak has the nerve to call Finland ‘quiet’ when he sends Dana International to the upcoming Eurovision contest with a song called ‘Ding Dong’. Maybe the Israeli Defense Minister should practice what he preaches before taking the piss out of Finland!”

When asked what the band will do next, Mr. Lordi said they are considering joining the BDS movement (Boycott, Divestment and Sanctions). “Due to our skin troubles as a result of our humongous amounts of makeup, Lordi is actually the largest consumer of Ahava Dead Sea products after the U.S. and Britain. I’m sure Ahava will really feel this in their pockets.”

Mr. Lordi also promised to hike up the volume at their next concerts and assured all fans of permanent damage to their hearing, after which he proceeded to roar into the microphone and sip blood out of an empty animal horn.