Hundreds protest the murder of a woman before her children’s eyes. While some of the male demonstrators preferred to focus on police inaction and racism, the women demanded to speak about what is actually happening inside Arab society.

By Haggai Matar and Hagar Shezaf 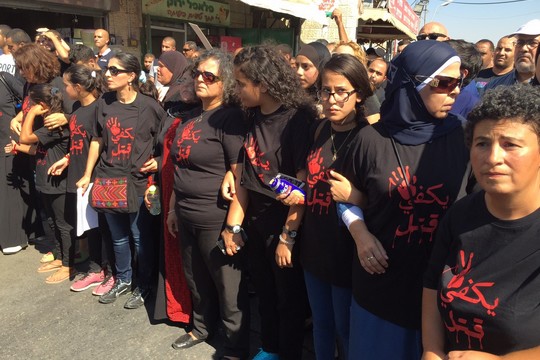 MK Aida Tuma-Sliman stands alongside the family of Dua’a Abu Sharkh, who was murdered last week in front of her children, in Lod, Friday, September 30, 2016. (Haggai Matar)

Around 500 women and men marched Friday afternoon in the city of Lod to protest the gender violence and murder of women in Arab society.

The march, which began in Lod’s old city and ended in a vigil outside the old municipality building, marked a week since the murder of Dua’a Abu Sharkh — a murder that sparked the largest-ever women’s protest movement, what Samah Salaime termed a “women’s intifada.” Both the protest and the vigil mark the height of the community involvement in Lod in the struggle against gender violence in Arab society, the result of the hard work of local women’s organization, Na’am.

The daughters and family members of murder victims marched while wearing shirts with the names of the dead printed on their shirt, along with the sentence: “The murderer roams free.” Joint List MKs Aida Touma-Sliman, Haneen Zoabi, Bassel Ghattas and Osama Sa’adi all marched, along with hundreds of other supporters, alongside the family members. The demonstrators shouted slogans against police inaction, blaming them for solving crimes committed against Jews only.

Dua’a Abu Sharkh, a mother of four who was 32 at the time her death, was murdered last Friday while in her car. She was shot while returning her children to her husband, from whom she was divorced. The family claims that he had threatened Dua’a in the past. The demonstrators have been holding daily protests outside Lod’s police station, demanding that the police take action and catch the killer.

“Usually the media and the police claim the murder was an ‘honor killing,’ but people today came to say that they reject this line of thinking, one that we have been hearing for years,” said Fida Shahada, one of the demonstrators. “We do not accept this message, and we demand that the real killer is found, as well as all the killers who are walking free. We ask that the media stop using the term ‘honor killing.’

“We see how the police catches people who steal phones and leak privates photos. But it’s impossible for them to solve a murder?” added Shayma Abu Sharkh, Dua’a’s sister. “A telephone is more important than a human being? This is very painful. This demonstration is not only for Dua’a — it could potentially prevent the next murder.”

“There are those who claim that Arab women do not complain, but this is not true,” MK Touma-Sliman says. “Arab women do complain to the police, but the cases are very often closed. The police does not take seriously their complaints. I am tracking several cases in which a woman who was facing danger came and complained, and the police simply closed the case — one of those cases were closed 15 minutes after the complaint was filed. The police have the responsibility to protect citizens.”

Murderers among the protesters?

But even during the women-led protest, women were resigned to fight for their place, as well as over the messaging of the demonstration. +972 and Local Call blogger Samah Salaime, who heads Na’am, and was one of the organizers of the event, called it a “war on all fronts.” 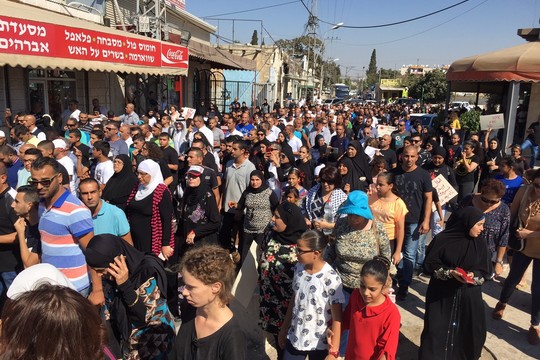 Even at the early stages of the march, a number of men took over the microphone, stood at the head of the march, and decided that they are in charge of the messaging. Their slogans included religious themes (“there is no God but Allah”), while putting emphasis solely on police responsibility and discrimination against the Arab public. “We, on the other hand, want to remind people of the names of the dead and talk about our internal responsibility,” Salaime says. “Slowly we managed to take control of the microphone, to break through the men, reach the front row, and call out our slogans, such as ‘Arab women are free,’ ‘we won’t rest until the weapons disappear,’ and ‘the killer is among us — the responsibility is ours.'”

The last slogan refers to a small protest that erupted inside the demonstration, when one of the women recognized a protester as the brother of someone who murdered one of her relatives. “We have the responsibility to protect women, especially because we recognize that the welfare system does not do its job, and because we have no trust in the police, Touma-Sliman said. “As long as we call on women to stand in the back during protests — women will continue to be murdered. As long as a woman says her husband hit her and she is told that it is okay because he is her husband, women will continue to be murdered. Even at this protest there may be people who murdered or who knew about a murder and kept quiet. We cannot forgive this, we cannot accept murderers, and our society must get up and condemn them and their protectors. Anyone who calls for violence of any kind has no place among us or on our stages.”

“This is a large protest and there are a large number of women here who participate and fight to be in the front of the demonstration, they will take the microphone by force if needed,” added Maha Saqallah-Tli, a social worker and activist. “This movement arises as a result of desperation. If we don’t bring about change, it won’t happen by itself.”

Hagar Shezaf is a Jaffa-based freelance journalist. This article was first published in Hebrew on Local Call. Read it here.