A call for a general strike on both sides of the Green Line, in solidarity with Gaza, prompts a range of responses and dilemmas among Palestinian workers in Jerusalem.

Heeding calls from Palestinian leaders on both sides of the Green Line, Palestinians across Israel and the West Bank observed both a general strike and day of mourning Monday, in solidarity with residents of the Gaza Strip.

The strike, which is to last three days in the West Bank and the Old City of Jerusalem, ground business to a halt and brought to the streets a diverse group of protesters in Ramallah. In Nazareth, a protest drew some 20,000 participants from around the country. In East and West Jerusalem, however, many Palestinian businesses remained open, with many workers arriving for work.

Throughout the city, Palestinians who chose not participate in the strike expressed a range of emotions on the efficacy and feasibility of such protests. Abdullah, a cab driver from Silwan, explained his decision to work Monday as resulting from steadfastness in the face of political turmoil, “Even during the Second Intifada, Palestinian cabbies still worked,” he proudly proclaimed. 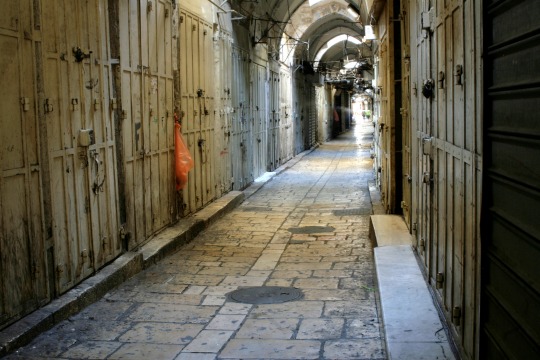 Palestinian-owned stores in Jerusalem’s Old City are shuttered in honor of a three-day strike across Jerusalem and the West Bank. (photo: Bilha Calderon)

Amir, a receptionist for an ear doctor in Bab Al-Zahra in East Jerusalem criticized this approach, attributing them to a lack of nationalism. “In Jerusalem everyone stays open,” Amir, who lives Ramallah, told me. “Go to Ramallah, go to Bethlehem—everyone is closed there.”

Others working near the Old City explained that grocery stores, bakeries, pharmacies and doctors’ offices have to stay open to allow people to run last minute errands during Ramadan, or to provide those fasting with medical attention. If he didn’t work in the medical profession, Amir told me, he’d have stayed in Ramallah and gone to the protests that took place there.

As we were talking, a friend of his who works at a shoe store on Salah ad-Din Street popped in to say good morning.

“Where are you off to?” Amir asked his friend, winking at me. “To open up,” his friend replied. “You see?”

Abdullah dismissed such accusations as baseless, citing instead the long-term risk of taking one day off in protest. “Are the Israelis going to give me anything if I don’t work today, if I lose my job?” he yelled, turning down his radio, as we snaked along a mostly empty Salah ad-Din street en route to French Hill just before noon on Monday. That the strike is occurring during Ramadan is an added stress, with families buying gifts and updating household wares and appliances. “Its just not possible for me right now.”

Read +972′s full coverage of the war in Gaza

At Café Malha in French Hill, employees and customers offered an entirely different take on the strike.

Abu Omar lives in the Old City and took the day off as part of the strike. An older man in a brown button-down shirt and neatly pressed slacks, he came to French Hill to play the lotto and catch up with some friends. A one-day strike, he told me, won’t affect the economy, and it won’t change Israeli leaders’ strategic calculation. The move, he explained, is largely symbolic.

“Efforts like these are aimed at achieving a unity in spirit for all Palestinians,” he explained as an employee looked on. “Striking is to remind us that while we aren’t being attacked the way they are in Gaza, we are still a part of the same struggle.”

At Q’s, a burger and wings restaurant located a floor above Café Malha, Ismail, the lone employee there that afternoon, criticized the strike as a subtle form of escalation – one that will be met with backlash from Israeli Jews. Foreign Minister Avigdor Liberman, for example, called for Israelis to boycott businesses that closed in solidarity with Gazans. “The strike is an error. Its like throwing stones,” Ismail argued waving to pedestrians from his empty, air-conditioned restaurant. “Do people think there won’t be an equal, or heavier response?”

“The person under the lash is not the same as the one counting the lashes from a distance,” Abdullah opined to me, quoting Emile Habibi, a Palestinian poet and politician, in response to criticisms throughout the Arab world on his accepting the 1992 Israel Prize.

Who is under the lash, and who is counting from a distance, however, is not clear.

Just before 4 p.m., a group of construction workers in the Nahlaot neighborhood filled out time cards and called their families to tell them they were leaving work to return home. Some sat in the van they used to travel to and from work, others meandered around the construction site, cracking jokes.

“If we don’t work,” the foreman told me as he collected time cards from employees boarding a van to return them to East Jerusalem and the West Bank, “[Jewish employers] will find [other Palestinians] who will—that’s all there is to it.”

Related:
PHOTOS: A Gaza funeral for 26 members of one family
Mourning death wherever it strikes
Why Palestinians continue to support Hamas