How Israeli authorities avoid their duty to indict settlers who build illegally on other people’s land. 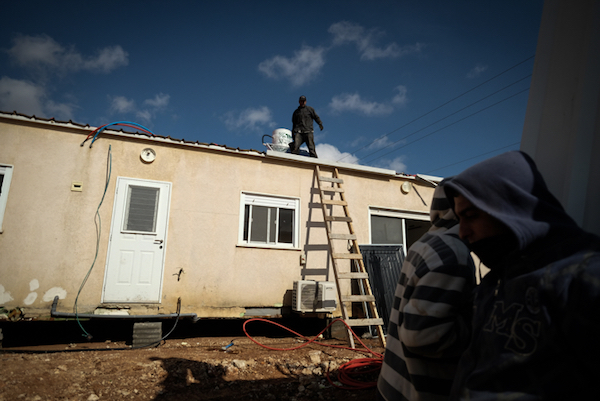 In August 2009, the residents of Kfar Aqeb, a Palestinian village near Ramallah, noticed 12 illegal structures being built on their land near the settlement of Kochav Ya’akov. The residents urgently petitioned the High Court of Justice, assisted by Yesh Din, demanding the court order an immediate halt to the construction. What happened next is a microcosm of the behavior of the law enforcement apparatus in the occupied Palestinian territories.

The IDF’s Civil Administration issued work stoppage orders on August 4th, and on August 16th also issued a closed military zone order, prohibiting Israeli civilians from entering the area. The state informed the court of those orders on September 2nd. But just one day prior, on September 1st, the Mateh Binyamin Regional Council informed the court that all of the buildings were already populated by olim hadashim (new Jewish immigrants) and were already connected to infrastructure. Israel’s enforcement policy automatically refuses to enforce demolition orders against residential buildings if they are already populated.

Given the regional council’s statement, the justices prohibited both further construction as well as connecting the buildings to other facilities. They assumed no one would dare to lie to the High Court.

How do we know? Because the police had no choice but to open an investigation into the suspected violation of Civil Administration orders. After they closed the case, Yesh Din asked for the file. Our office has quite a few people who have seen just about every dirty trick in the book. But this time, even their jaws dropped.

A simple examination of the case file showed that two of the residents – olim hadashim – arrived in Israel on September 10th, i.e. over a month after the work stoppage orders were issued, three weeks after the closed military zone order, and a week after the High Court issued an interim order prohibiting further construction. And oh, yes, about 10 days after the regional council informed the court that the houses were populated. And just so there is no misunderstanding, the contract with the new residents was signed on the day they entered the apartments – nine days after the regional council provided the court with a statement containing clearly inaccurate details. One resident, an oleh hadash, only landed in Israel on August 26th, i.e. 10 days after the closed military zone order was issued.

In short, the houses were populated contrary to judicial orders. That was enough to warrant an indictment against those involved in violating the order and presenting the court with a false statement. We appealed the closing of the criminal case; the prosecution closed the investigative case a second time. We reviewed the case a second time, and found that the police didn’t even bother to interrogate the architect who signed the incorrect statement to the High Court, according to which the buildings were populated. The police did not seize documents in the settlement or in the Mateh Binyamin Regional Council. And it interrogated no one regarding the question of coaxing olim hadashim to enter the building in violation of court orders.

That is to say that the prosecution – the body entrusted with law enforcement in Israel – decided that serving the High Court with a false statement (a felony) was not something to be overly concerned with, and closed the case citing lack of evidence, even though no proper attempt to locate any evidence was made. Its message was heard loud and clear.

Yesh Din recently published a new position paper, Crime Without Punishment, documenting the serial dereliction of duty by the law enforcement apparatus – beginning with the police, the prosecution and the courts – when it comes to enforcing the laws vis-a-vis Israeli construction felons in the West Bank. The Kfar Aqeb case is one of a series of cases examined in the document, and is perhaps the simplest and most deplorable, but there is no shortage of deplorable cases.

An important distinction has to be made. The report deals not with the administrative side of the issue – the enforcement of demolition orders against illegal construction – but with its criminal side. Illegal construction is a criminal felony, even more so when the construction involves trespassing on the land of another. Ignoring judicial orders and making false statements to the courts are also criminal felonies. Once the police are informed of a felony, they are required to investigate it.

The problem is that everyone knows how things are done, and that such an investigation will bring the investigator nothing.

The meaning is clear. The felons – often local authorities and those who hold public office – know that nothing will happen to them. They know the police will not investigate, that the prosecution will not prosecute, that the judges who will have to deal with the petition against the decision of the prosecution will sigh and say “this is inconceivable!” before closing the case with a verbal slap on the wrist. In a single word, the felons enjoy impunity.

The prosecution’s part in all this is critical. It is supposed to oversee the work of the police, to hasten it when needed, to demand from it further investigations when it doesn’t do a good job, and to take the felons to court. Then it presents the crime in the sharpest way possible, and demands a deterring punishment. Legally speaking, behind that big word, “the state,” that illusionist masquerading as the great Wizard of Oz, stands the prosecution. And it betrays its duty time and again.

A few words must be dedicated to the person at the head of the pyramid, the attorney general. In another case described in the position paper, the Ofra sewage treatment facility, former Attorney General Weinstein decided – after putting off the issue until 18 months after the investigation ended – not to indict the two heads of the Mateh Binyamin Regional Council at the time, saying that such indictments would serve as a precedent. Weinstein’s decision is a perpetuum mobile of outlawry: every felon could argue that law must not be enforced in his case, as this would provide a precedent.

This is not how things are done in Israel. According to a lawyer specializing in building and planning laws, in Israel proper, anyone who builds even an illegal porch will be slapped with an indictment. If he does not comply with the verdict, he will be indicted for violating  a judicial order. Even when demolition orders are not enforced, the felons are still convicted and fined a hefty sum. On the other side of the Green Line, you can build entire buildings under much more severe circumstances (the felon builds on land he does not own), and even so, at the courtesy of the prosecution, nothing is done.

“Crime Without Punishment” describes a vicious circle: Israelis build illegally, the Civil Administration issues orders but does not enforce them, the police are sometimes forced to open an investigation, and they, along with the prosecution, drag their feet. Then the prosecution refrains from issuing indictments and denies appeals, while defending the felons in court – a defense that were we not familiar with, we would term paradoxical.

The problem is that this vicious cycle goes both ways: because the prosecution denies appeals and protects the felons, the police know there is no point in conducting the investigation and no reason to hasten it; and since they do not investigate and the prosecution does not indict, the Civil Administration official knows there is no point in insisting that his orders are implemented; and the felon knows he will get away scot-free.