In many countries, if asylum seekers are engaged in legal proceedings, their deportation is automatically delayed, in light of the implications of deporting an individual to a country where he or she faces danger. In Israel, this principle does not exist. 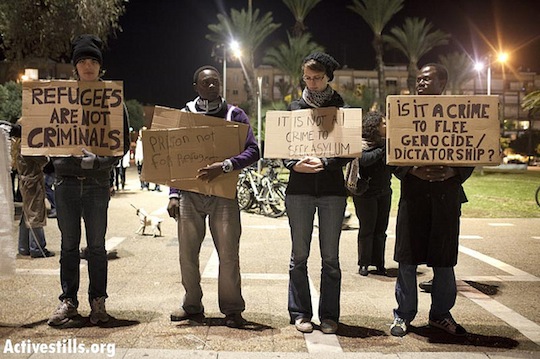 We have discussed elsewhere how the rights of “foreigners” in Israel are considered through the prism of the rights and interests of Israelis.  The likelihood of the court granting a “foreigner” relief in the country improves considerably if an Israeli citizen’s rights and interest are positively affected. However, when seeking legal status in Israel in order to improve their own individual rights, “foreigners’” chances of gaining the court’s support are minimized.

The Supreme Court last week handed down four decisions clearly demonstrating this point. It should be noted that the decisions were handed down by three different judges, and it is unclear how they would have fared had all of the rulings been issued by the same judge.

The four decisions were handed down in response to requests by “foreigners” to delay their deportations from Israel until the conclusion of legal proceedings dealing with their individual status in Israel. Two criteria are reviewed in these instances: the likelihood that the court will accept the petition or appeal, and the “balance of convenience,” which is the ratio between the harm and benefit of their delayed deportation. In many countries, if asylum seekers are engaged in legal proceedings, their deportation is automatically delayed, in light of the harsh implications of deporting an individual to a country where, in hindsight, he or she will face danger.

This principle does not exist in Israel.

We ask readers to ask themselves in which of the following four cases would more harm be inflicted on the deportee if the court eventually accepted his or her petition or appeal, even if he or she is allowed to return to Israel:  A Colombian national, who is lesbian, who will be deported to a country where she claims her life is in danger if, following the deportation, legal proceedings conclude that lesbians are indeed persecuted in Colombia; a Philippine national conducting legal proceedings to prove his paternity of a Filipino boy who was granted legal status in Israel if, after his deportation and several months away from his son, he is indeed found to be the father and is granted the right to stay with his son in Israel; a Chinese citizen, whose claim of being a Falung Gong practitioner is denied by the Interior Ministry, and the court determines after her deportation that she is indeed an activist and that her life is in danger in China; or a Philippine national who has resided in Israel for many years without a permit and is a caregiver for an autistic Israeli boy.

The first three cases pertain to the rights of the “foreigner.” In the fourth scenario, deporting the caregiver prior to a final verdict on the petition would affect the Israeli boy. The fourth was the only case among those described in which the Supreme Court determined that the deportation should be delayed until a verdict on the appeal is reached – because an Israeli boy’s life would be affected.

In the first three cases, the Supreme Court determined that the chances of siding with the appellants were low (this decision was made prior to the full proceedings, during which all of the claims and the entirety of the material on which the appeals were based would be presented), and that the deportations should go ahead without the need to wait for a verdict. In the fourth case, the court determined that it would not address the legal proceedings, as the “balance of convenience” is sufficient to delay the caregiver’s deportation, due to the harm that her deportation would inflict on the Israeli boy.

As any rational person should know by now, the asylum system in Israel is unfair and defective; it grants a false sense of administrative proceedings, the results of which are pre-determined. The “foreigners” appealing are all liars, they’re all economic migrants, no one is a refugee. As the United Nations High Commissioner for Refugees has noted, the rate of refugee recognition in Israel is the lowest in the western world; in fact, in the three years since the Interior Ministry began independently reviewing asylum requests, only one person has been recognized as a refugee. Whoever deals with refugee issues in the world, in practice or in academia, already knows that Israel’s asylum system is an international joke,  despite the fact that it takes itself very seriously.

Sadly, the court system does not recognize this.