This week: more holes in the separation wall, protests against the Prawer-Begin Plan, tear gas in Nabi Saleh, a Palestinian passport for a Palestinian citizen, soldier protect settler activists, solidarity with Palestine at the UN, marching against violence against women, Greenpeace targets GMOs in Israeli supermarkets, and clashes after Israeli forces kill three Palestinian militants. 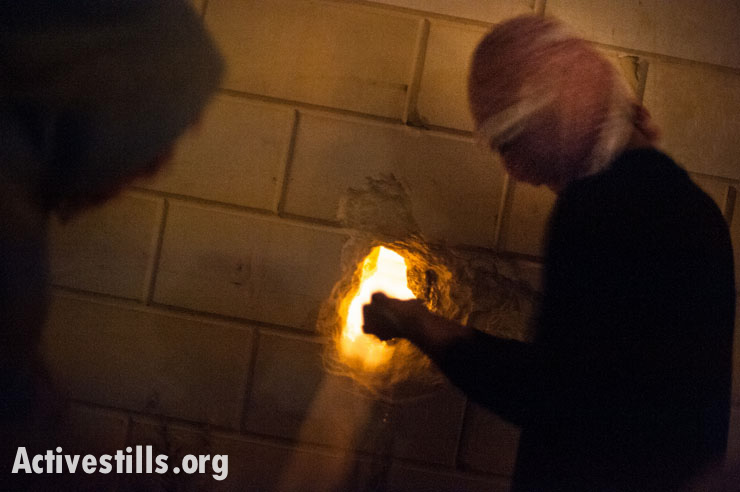 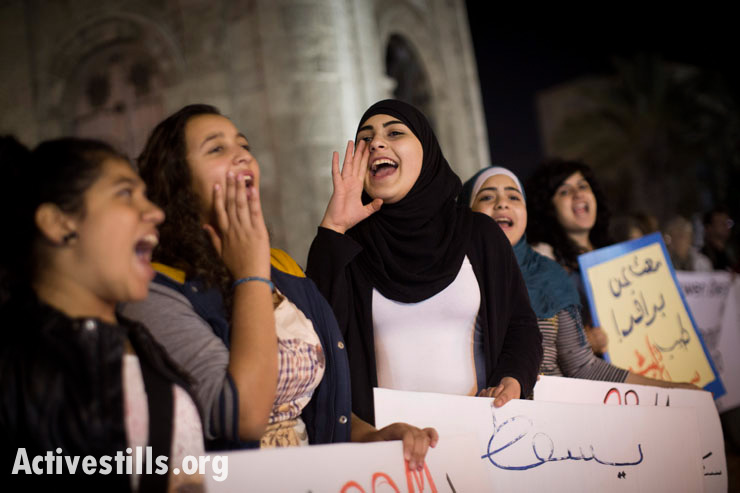 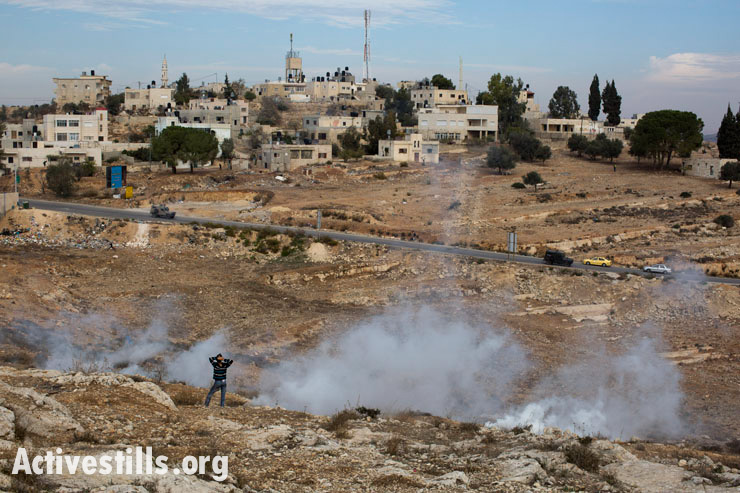 A boy stands next to tear gas canisters shot by the Israeli army during the weekly demonstration against the occupation in the West Bank village of Nabi Saleh, November 22, 2013. (photo: Keren Manor/Activestills.org) 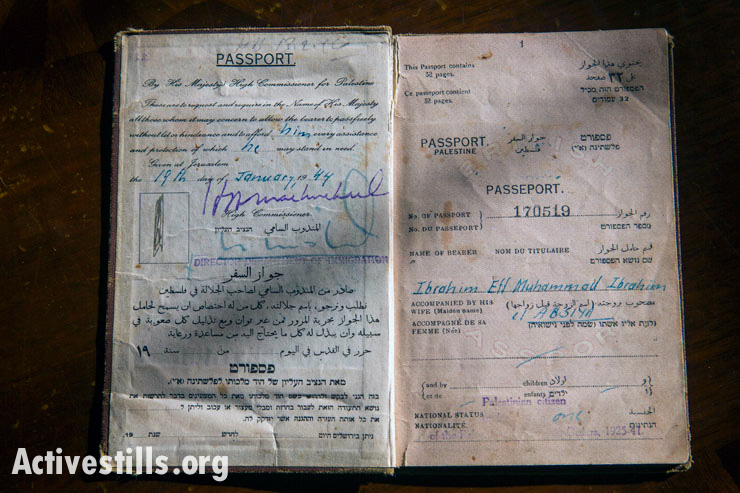 A Palestinian passport issued during the British Mandate, belonging to a Palestinian resident from Al Walaja and his wife, Absiya Jafari, who is more than 100 years old, Al Walaja, West Bank, November 23, 2013. The original village of Al Walaja was completely destroyed in 1948 during the Nakba and all villagers were forced to leave and became refugees. 75 percent of the village’s original 17,793 dunums of land was lost in 1948. Many went to Jordan, Lebanon, and Bethlehem areas. After some time; a new village was built beyond the Green Line. The separation wall is currently being built all around the village and residents will be cut off from most of their land. (photo: Anne Paq/Activestills.org) 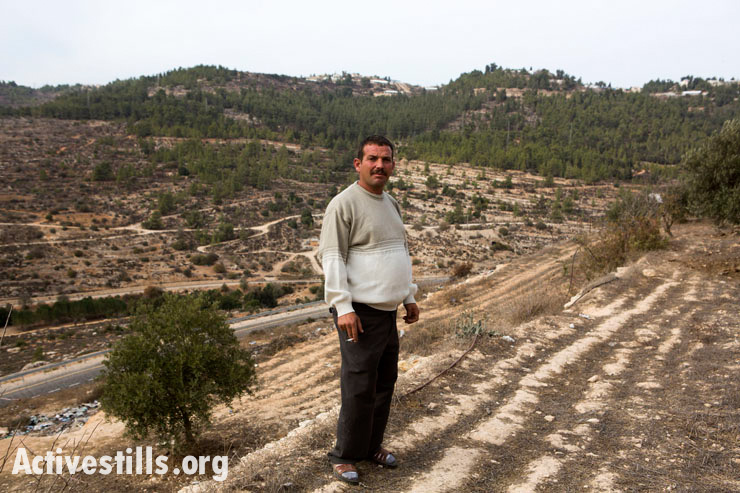 Nael Khalil Hajali, near the route of the separation wall, on his land in Al Walaja, West Bank, November 23, 2013. Nael owns around 30 dunams on the other side of the Wall, and dozens of his olive trees were uprooted during its construction. Once completed, the wall will surround the Al Walaja village completely (360 degrees), and residents will be cut off from most of their land. In June 2013, the Jerusalem Planning and Building Committee approved the establishment of a national park on 1,200 dunams of land located between the Separation Wall and the Green Line belonging to Al Walaja. (photo: Anne Paq/Activestills.org) 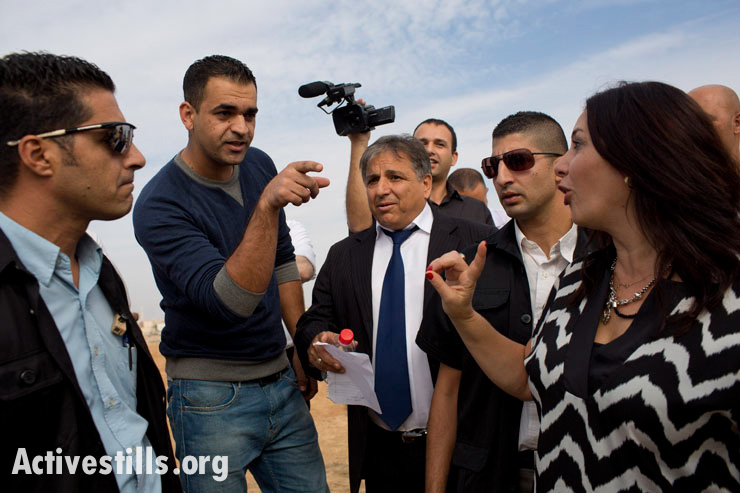 A Bedouin activist argues with MK Miri Regev, during a tour by the Israeli Knesset Internal Affairs Committee in the Negev regarding the Prawer-Begin plan, Rahat, Israel, November 24, 2013. (photo: Oren Ziv/Activestills.org) 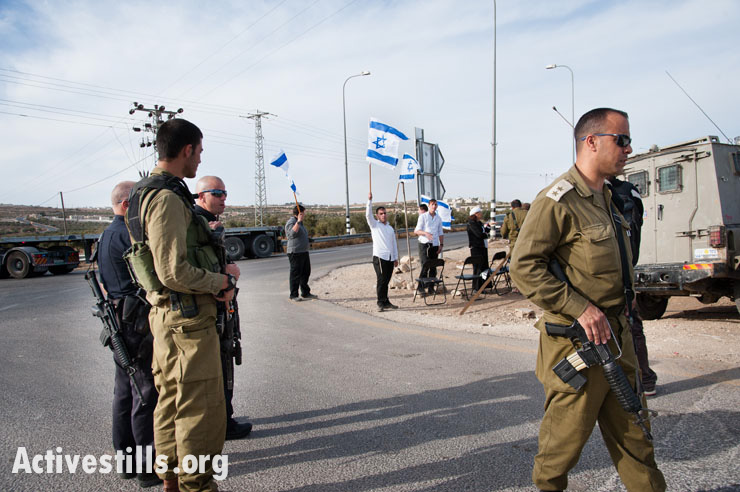 Israeli soldiers protect settler activists demonstrating near the West Bank village of Tuqu’, November 25, 2013. Nearby, some 60 trees were damaged or destroyed by Israelis accompanied by soldiers. In an act of collective punishment, illegal under international law, Israeli authorities then ordered the Palestinian landowners to cut the branches from five rows of trees for 500 meters along the road because of recent attacks on settler vehicles in that area. Residents are now seeking legal means to block the order. (photo: Ryan Rodrick Beiler/Activestills.org) 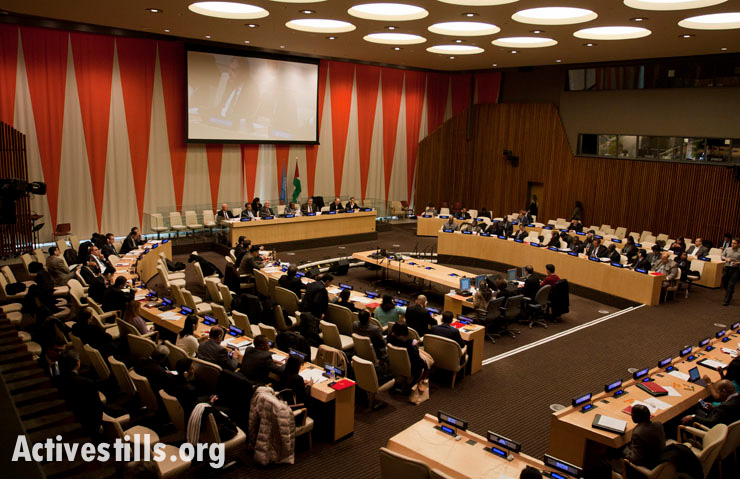 The International Day of Solidarity with the Palestinian People in the ECOSOC (Economic and Social Council), at the United Nations headquarters in New York City, USA, November 25, 2013. (Photo: Mustafa Bader/Activestills.org) 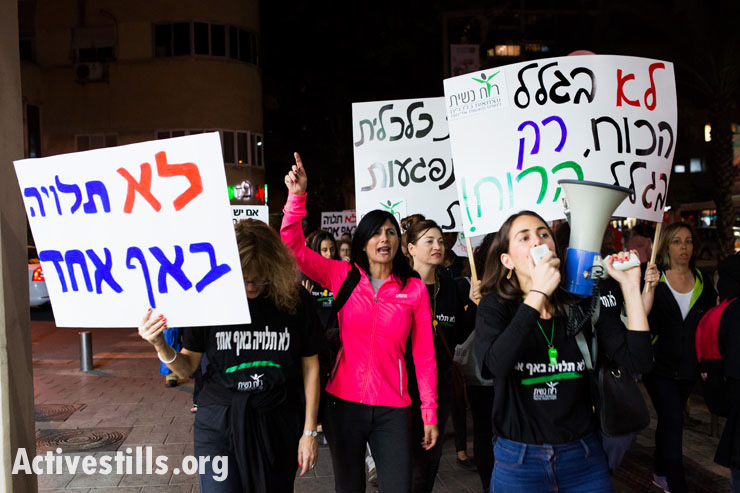 Hundreds of people marched in the streets of Tel Aviv to mark the International Day to End Violence Against Women, November 25, 2013. (photo: Yotam Ronen/Activestills.org) 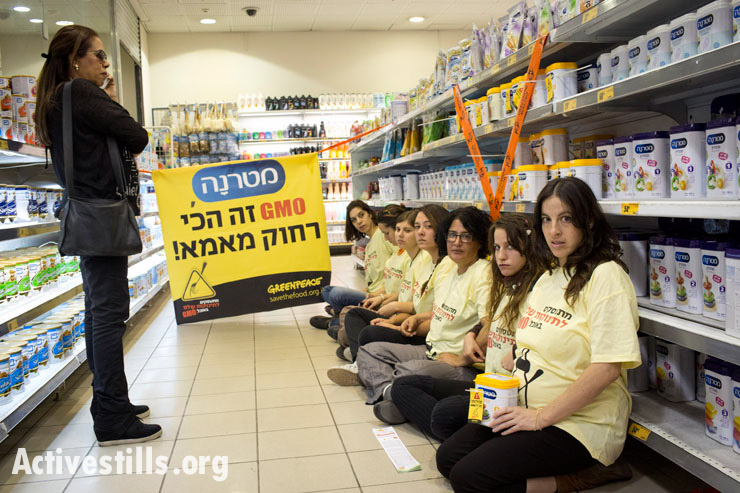 Greenpeace activists protest inside a supermarket in the city of Holon, demanding the labeling of baby formulas that contain genetically modified organisms (GMO), November 26, 2103. The activists labeled baby formulas that contain genetically modified products, and blocked an area i the supermarket for several hours. Greenpeace claims that the “Materna” baby food company misleads the public by claiming on the packaging that the food is “GMO free” when in fact laboratory tests have proved the opposite. (photo: Oren Ziv/Activestills.org) 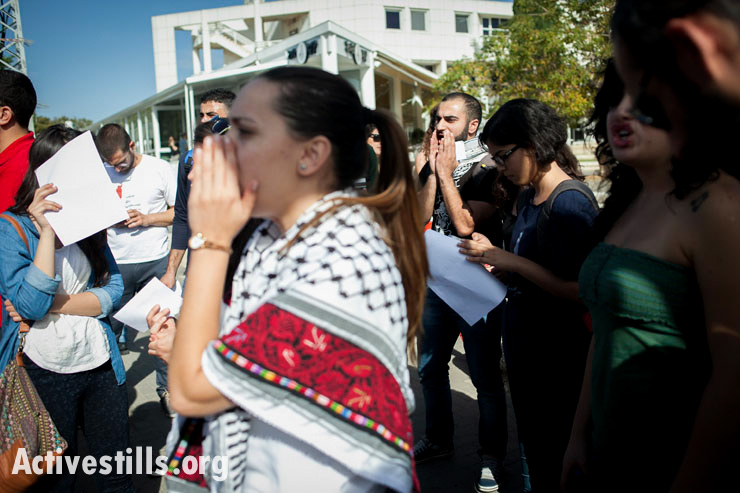 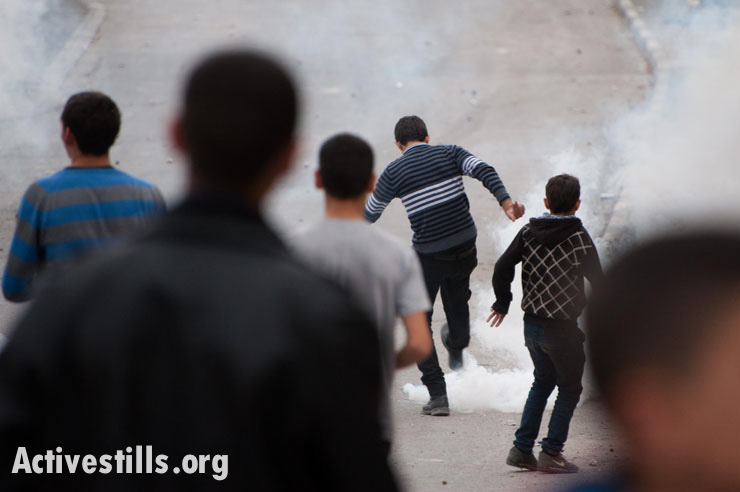 A Palestinian youth kicks away a tear gas grenade during clashes with Israeli forces in Aida Refugee Camp in the West Bank town of Bethlehem, November 27, 2013. The clashes were in response to the killing of three Palestinian militants by Israeli forces the previous day in Yatta. (photo: Ryan Rodrick Beiler/Activestills.org) 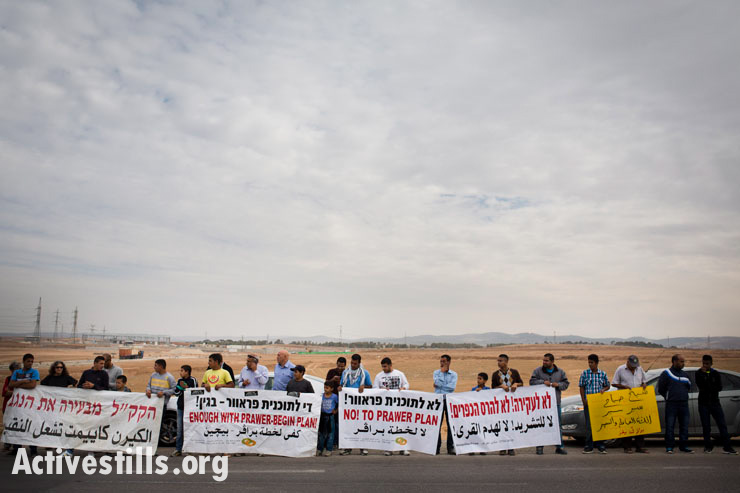 Activists and Bedouin residents protest against the Israeli Knesset Internal Affairs Committee tour in the Negev regarding the Prawer-Begin Plan, in the Bedouin village of Rahat, November 24, 2013. (photo: Yotam Ronen/Activestills.org)
Get Our Weekly Newsletter 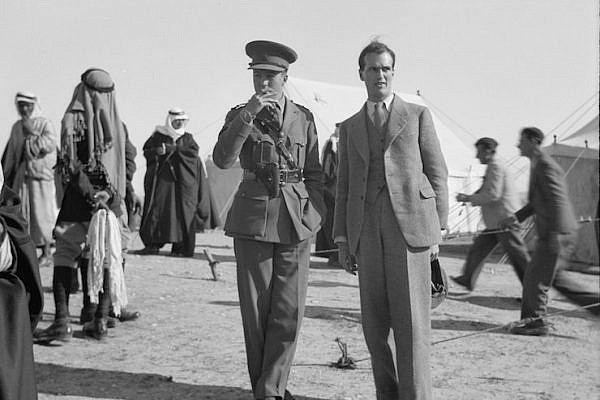 A century later, Trump’s deal for Palestine is no better than Britain’s
The British left Palestine in 1948 with their tail between their legs, having laid the groundwork for 100 years of conflict. With people like Trump and Kushner leading the way, we should expect nothing better for our own century. By Jonathan Adler The White House revealed last weekend that the “Deal of the Century,” the administration’s plan…
By +972 Magazine May 28, 2019 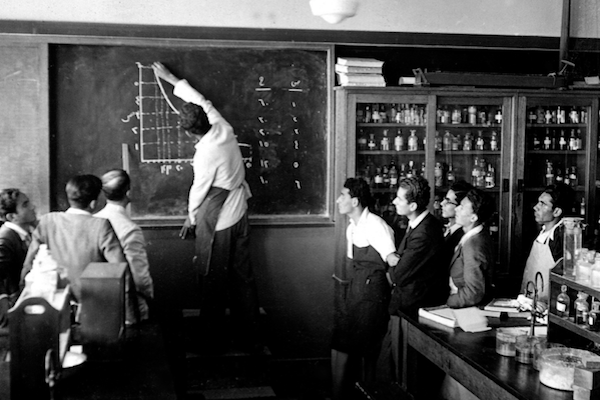 The unknown history of the Palestinian school funded by an Iraqi Jew
Ellis Kadoorie hoped that by establishing an agricultural school in Tulkarm, he would be helping to educate and improve the conditions of Palestinians and Jews alike. Little did he know it would become a microcosm of the Israeli-Palestinian conflict. By Tamar Novick and Arie M. Dubnov The Kadoorie Agricultural School holds a special place in Israeli…
By Haokets February 25, 2017 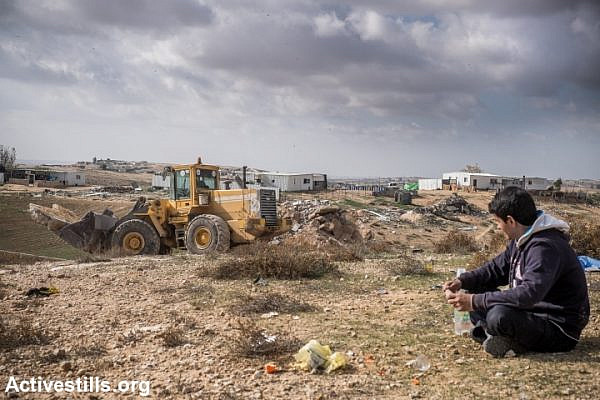 Negev Bedouin are now demolishing their own homes out of despair
After losing a lengthy legal battle against the state, residents of the unrecognized Bedouin village Sawa decided that demolishing their own homes is preferable to seeing the authorities do it. By Michal Rotem On Tuesday of last week, the residents of Sawa, an unrecognized Bedouin village in the Negev Desert, used their own money to…
By +972 Magazine December 26, 2014