Palestinians mourn youth killed by Israeli forces, activists resist house demolitions in the West Bank and separation wall construction in Jerusalem, and life goes on in Gaza. Activestills photographers present the stories of the week from their unique perspective. 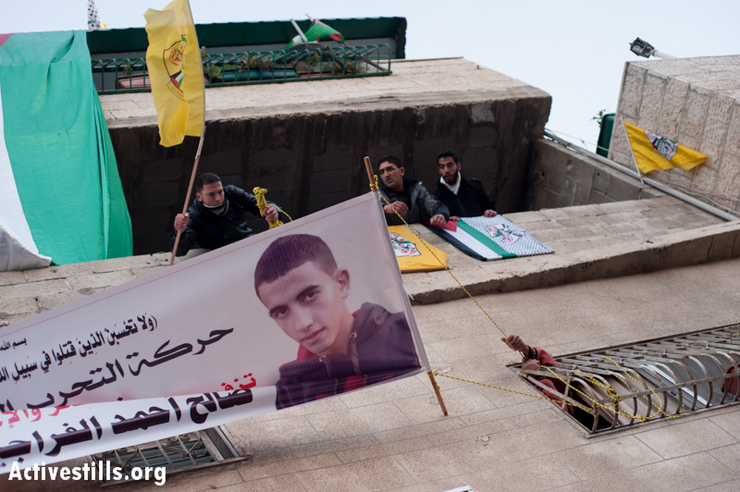 A banner with the portrait of Salih al-Amarin, age 15, hangs from his home in Azza Refugee Camp in anticipation of his funeral, January 23, 2013. Salih al-Amarin was shot in the head with live ammunition by Israeli forces on January 18, 2013 during clashes in Bethlehem’s nearby Aida refugee camp. The exact time of his death is in dispute. (Photo by: Ryan Rodrick Beiler/Activestills.org) 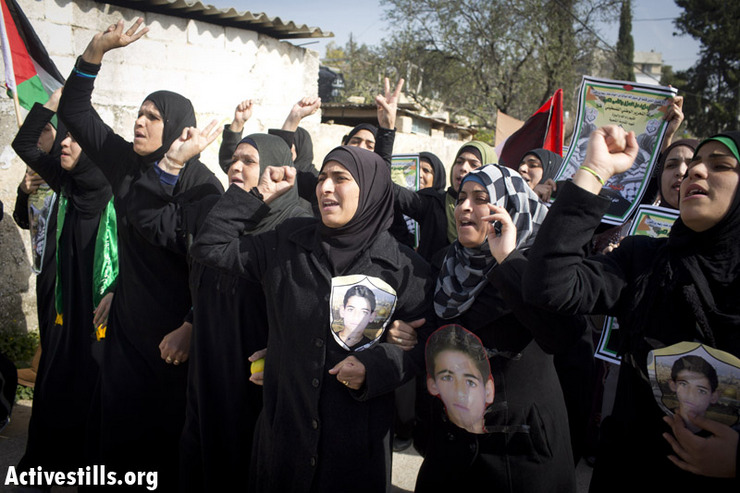 Palestinian women holding pictures of Sameer Awad, during a protest against the occupation, Budrus, Januay 18, 2013. Sameer Awad was killed by two bullets to the chest and two in the legs that were fired by Israeli forces near the Separation Wall in his village, Budrus, on January 15, 2013. (Photo by: Oren Ziv/Activestills.org) 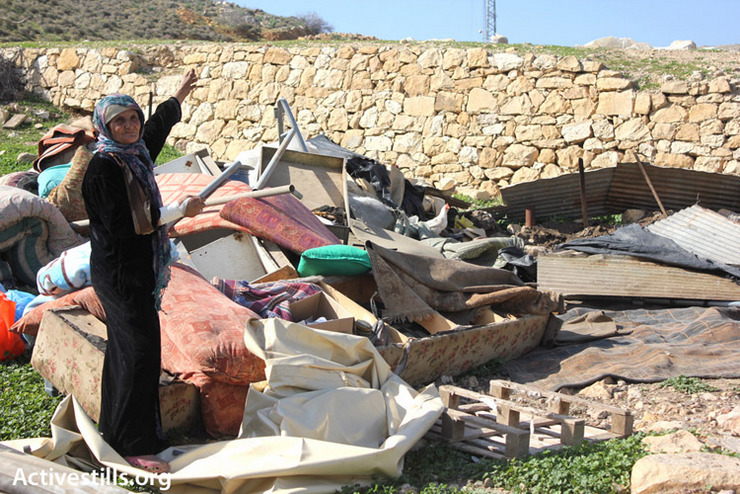 Bulldozers accompanied by Israeli soldiers demolished around 70 structures, among them: residential structures, animal sheds and other shelters in the area of Al Maleh and Al Mayta in the northern part of the Jordan Valley, West Bank, January 17, 2013. (Photo by: Ahmad Al-Bazz/ Activestills.org) 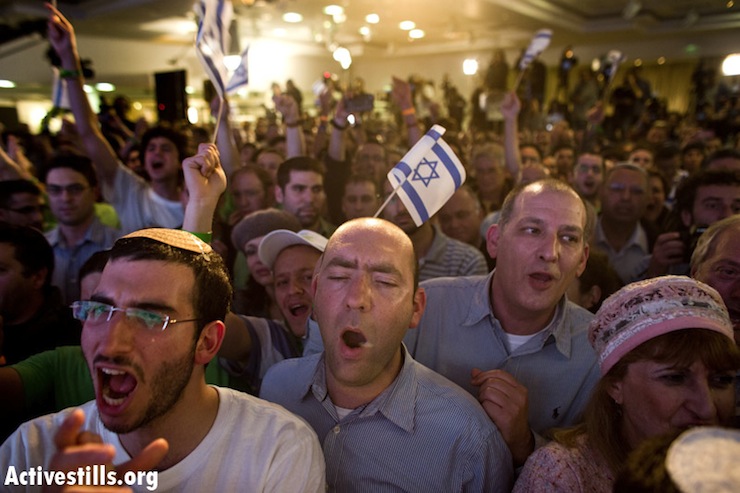 Supporters of Naftali Bennett’s Jewish Home gather at the party headquarters at the end of election day, January 23 2013. Jewish Home was able to capture 12 seats, and will likely be one of the more influential parties in the next coalition. (photo: Oren Ziv) 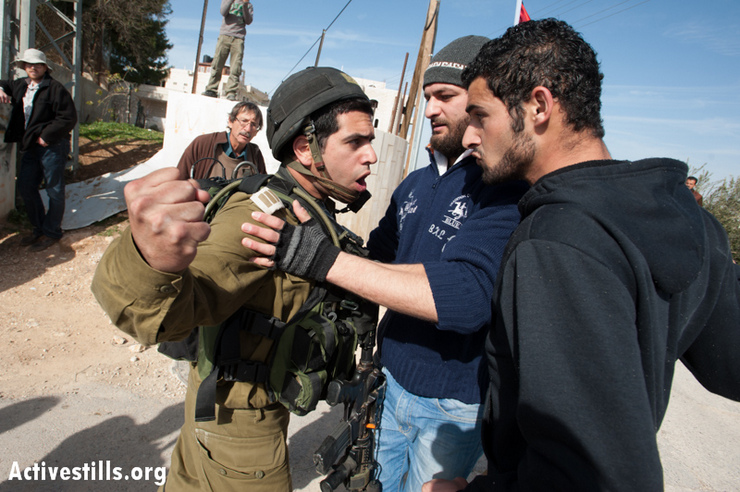 An Israeli soldier threatens to punch a Palestinian activist during a weekly nonviolent demonstration against the Israeli separation barrier, Al Ma’sara, West Bank, January 18, 2013. If completed as planned, the wall would cut off the village from its agricultural lands. (Photo by: Ryan Rodrick Beiler/Activestills.org) 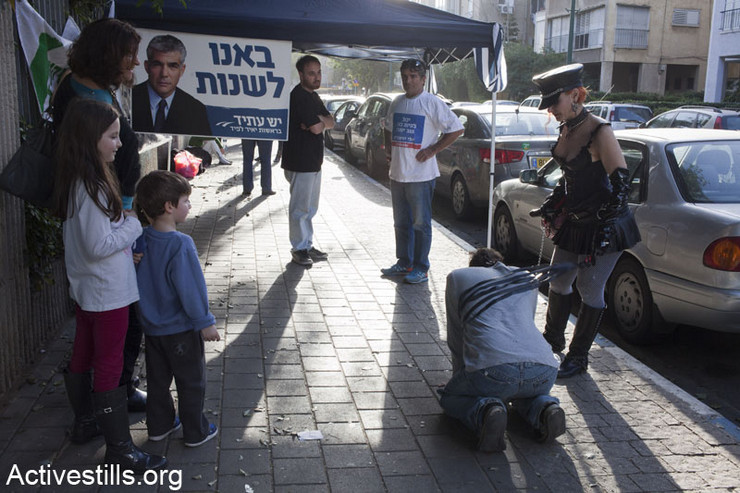 On election day in Israel, a live interactive performance challenges the concept of democracy and the legislative structure. The performance/intervention was conducted outside polls in Be’er Sheva and Tel Aviv and involved the general public. January 22, 2013. (Photo by: Keren Manor/Activestills.org) 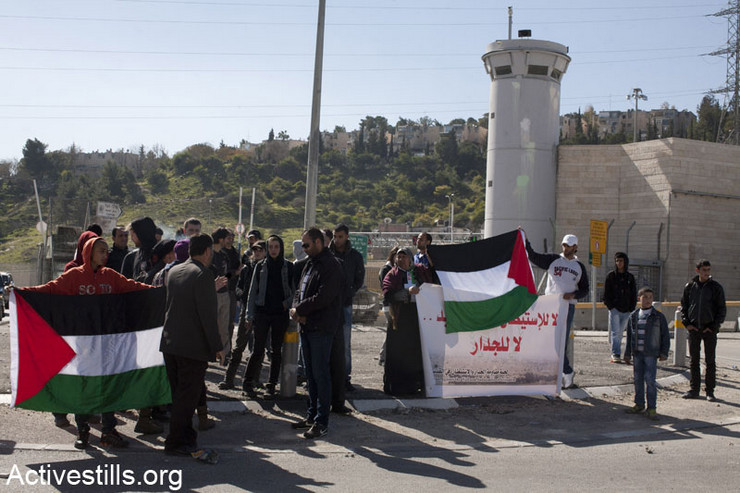 Next to the Israeli military terminal at the entrance to Shuafat refugee camp, a group of Palestinians and Israelis protest against the separation wall and the new permanent military terminal that divide more than 20,000 Palestinian Jerusalem residents from East Jerusalem. (Photo by: Keren Manor/Activestills.org) 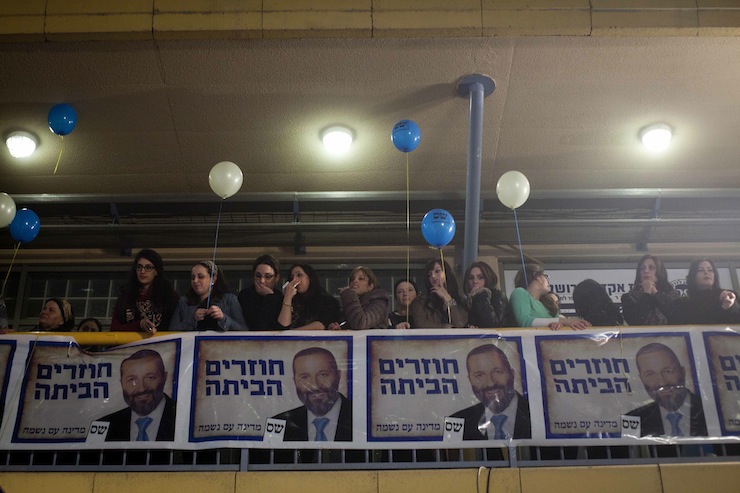 Female Shas supporters look on during the party’s post-election celebration. Shas managed to capture 12 seats in the upcoming Knesset, two more than in the previous election. (photo: Oren Ziv) 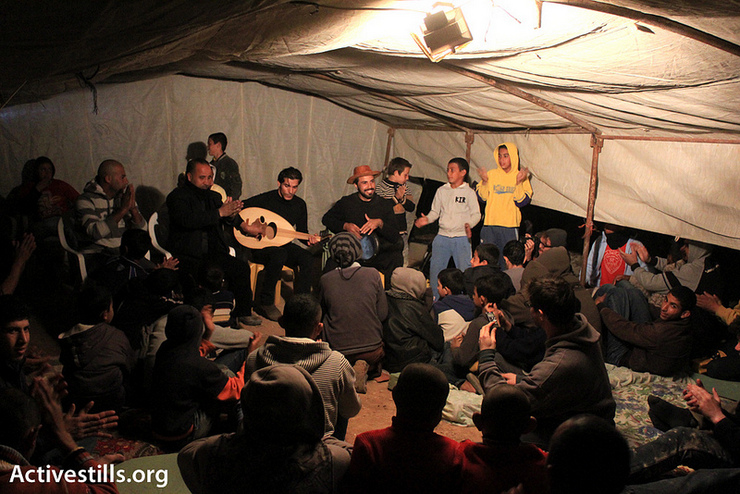 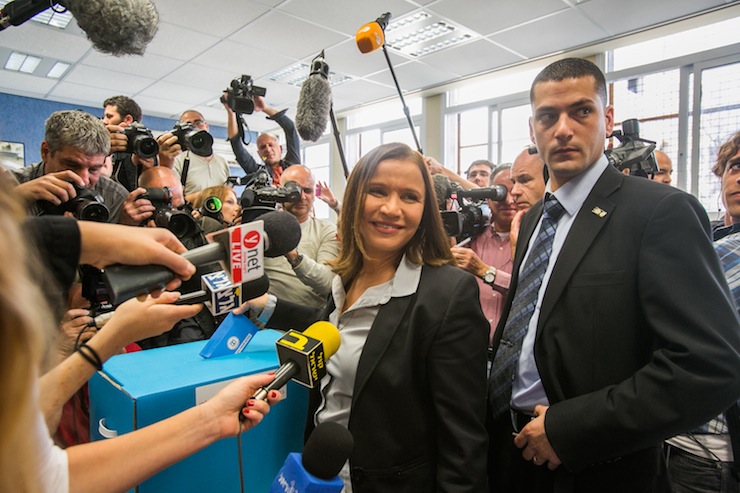 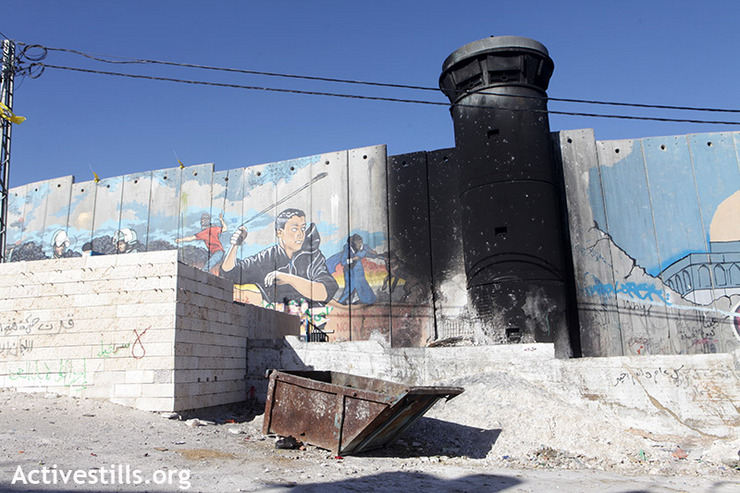 View of the Separation Wall and an Israeli military tower, burned a few days before during clashes between Palestinian youth and the Israeli army, Aida refugee camp, Bethlehem, January 19, 2013. The previous day, Salih al-Amarin, 15, was critically injured when he was shot in the head by the Israeli army in the camp. He later died of his injuries. (Photo by: Anne Paq/Activestills.org) 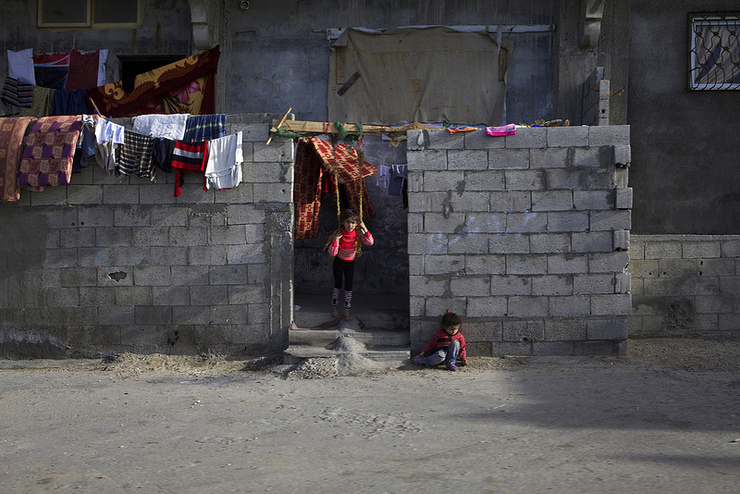