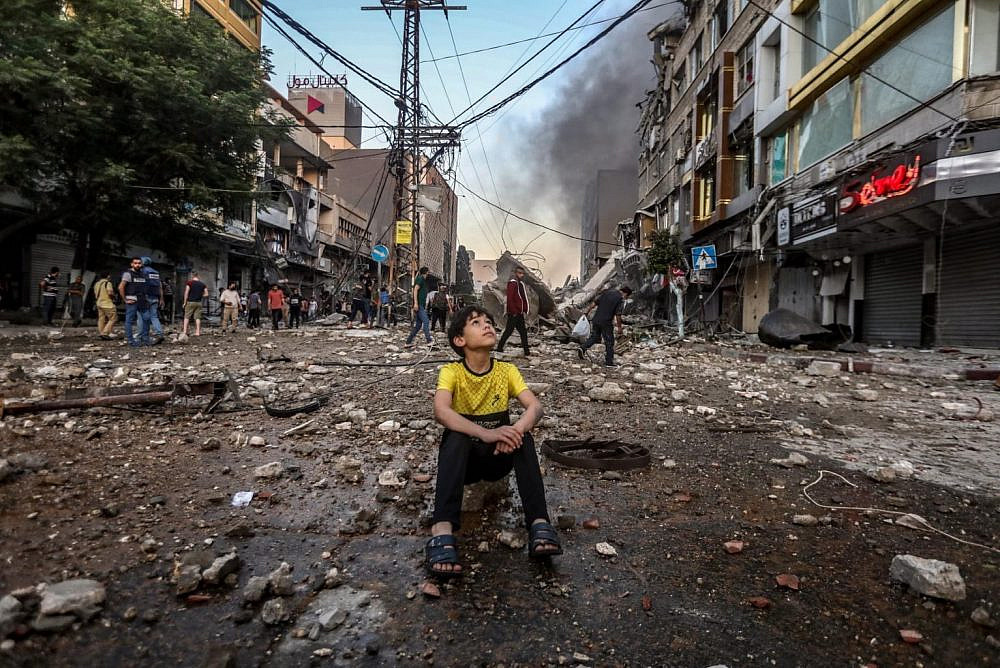 A Palestinian child seen in the wreckage of a neighborhood in Gaza following an Israeli airstrike, May 12, 2012. (Mohammed Zaanoun)

GAZA — Around 10 p.m. on Monday, I went to a friend’s cafe with a certain hesitation. It’s a small shop that offers some food and has 30 computers for customers to use. Children were sitting at some of them playing a combat video game.

I went to the cafe to buy letter stickers for my keyboard. This place is always packed during Ramadan, especially after iftar, the meal that breaks the fast. It was no different yesterday — there were lots of children around.

A friend was fixing the internet after it disconnected, and I decided to eavesdrop on a conversation between two children in elementary school. They were staring at their computer screens and playing the video game when one told the other, jokingly: “Don’t worry, Israel will wake all of us up for suhoor [the meal before the fast begins].” He meant from the sound of the bombs Israel was dropping.

His friend replied, cynically: “Ramadan is almost over, I think they want to send their blessings ahead of Eid.” They proceeded to stare at their screens and play.

Half an hour later, a man came into the cafe, his face red with anger. He began yelling at his son, one of the children from the earlier conversation. “Go home immediately!” he said. “How are you here playing your video game when the security situation is so dangerous?”

My friend, the owner, tried to calm things down, but the father — you could see the fear in his eyes — cursed at him. “What’s wrong with you, leaving your business open during times like this? And for children, no less?!” the father exclaimed. “You have no empathy for other people.”

The owner replied: “I have empathy for my family. I have three children to feed, and I, too, need something to live on. This place is my only source of income. If I close down, we will die. What do you suggest I do?”

They kept arguing while, outside, the shelling thundered. But this exchange tells a deeper story about the current reality in Gaza, and the two types of death that exist here: immediate, and slow. 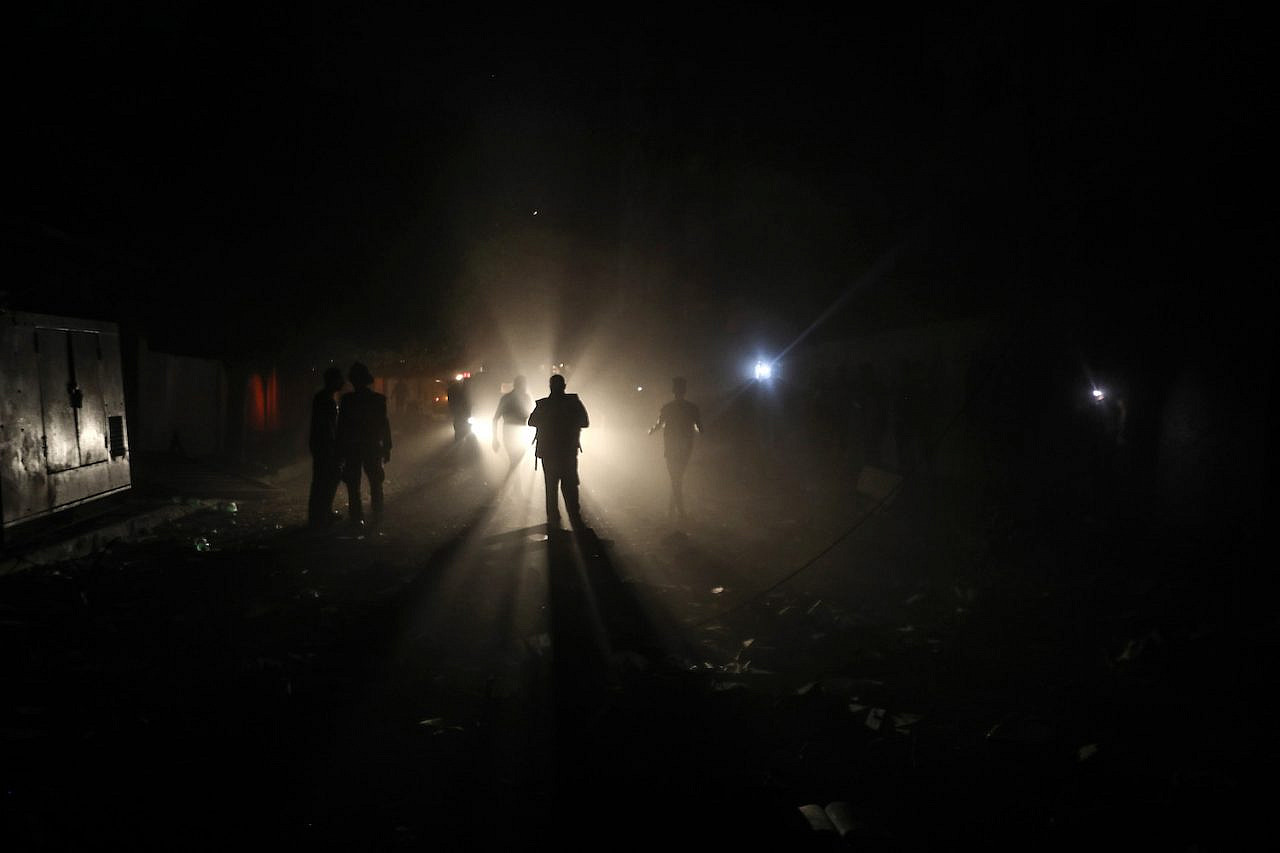 Palestinians inspect the site of a collapsed building after it was hit by an Israeli airstrike, Gaza, May 11, 2021. (Mohammed Zaanoun/Activestills)

The situation is deteriorating, perhaps toward an all-out military operation, which nobody is interested in. Back at home, the notifications keep coming, and the sounds of loud explosions are endless. In the news, they report on 25 victims so far, mostly civilians, including nine children. Who has anything to gain from this? No one.

As if the slow, silent war Israel has been waging against Gaza for years isn’t enough. Yes, the slow war: the ongoing air, sea, and land blockade in Gaza, and the settler takeover of Palestinian land, dunam after dunam, in the West Bank and Jerusalem.

For weeks, Palestinians in Gaza have been furious at Israel’s imminent expulsion of families in Jerusalem’s Sheikh Jarrah neighborhood. Everyone is talking about it, they are outraged. I don’t know if you, Israelis, are aware of the significance of Jerusalem for the residents of Gaza, and for all Palestinians.

It’s not only a religious connection. Palestinians see Jerusalem as an inseparable part of their national identity and their history. Over the past few days, hundreds of Palestinians in Gaza took to the streets, chanted, demonstrated, and burned tires to express their anger at what is happening in Jerusalem and Sheikh Jarrah.

A few days ago, in one of the protests, I was speaking with my friend Afaf. She is a 19-year-old English language student at university here. “Jerusalem is important to me,” she said, “it is the only place I feel a genuine connection and sense of belonging to as a Palestinian.”

What will happen now?

I kept thinking about what Afaf had told me. In all honesty, this strong connection to Jerusalem isn’t totally clear to me. I don’t fully understand it, but I know it runs deep. Over the last weeks, as I watched the Israeli forces in Jerusalem, the families in Sheikh Jarrah, the beatings, stun grenades and live shots, I felt helpless. As if someone had just hit one of my parents in front of my own eyes.

It’s a feeling. And we Palestinians are fragmented after all. We are scattered all around the world, and the occupation is the reason for this division, and for our ongoing exile. Our people are also torn politically, ideologically, and religiously. But when it comes to Jerusalem, we are all one. In a reality of absolute segregation between different Palestinian communities, this city is the last fragment of our unity. This, too, is what fed into the anger in Gaza toward what’s happening in Sheikh Jarrah, Damascus Gate, and the Al-Aqsa Mosque.

At home, I think to myself: What will happen now? It doesn’t look like it’s going to end well. Everyone is furious, and Palestinians in Gaza are already enduring a situation nobody would wish upon themselves. None of the residents here really wants a war, believe me. A war in which Israel will demonstrate its immense military might, flex its muscles, and wound thousands. I do not miss the sights of horror and bloodshed in our streets. Nobody does. 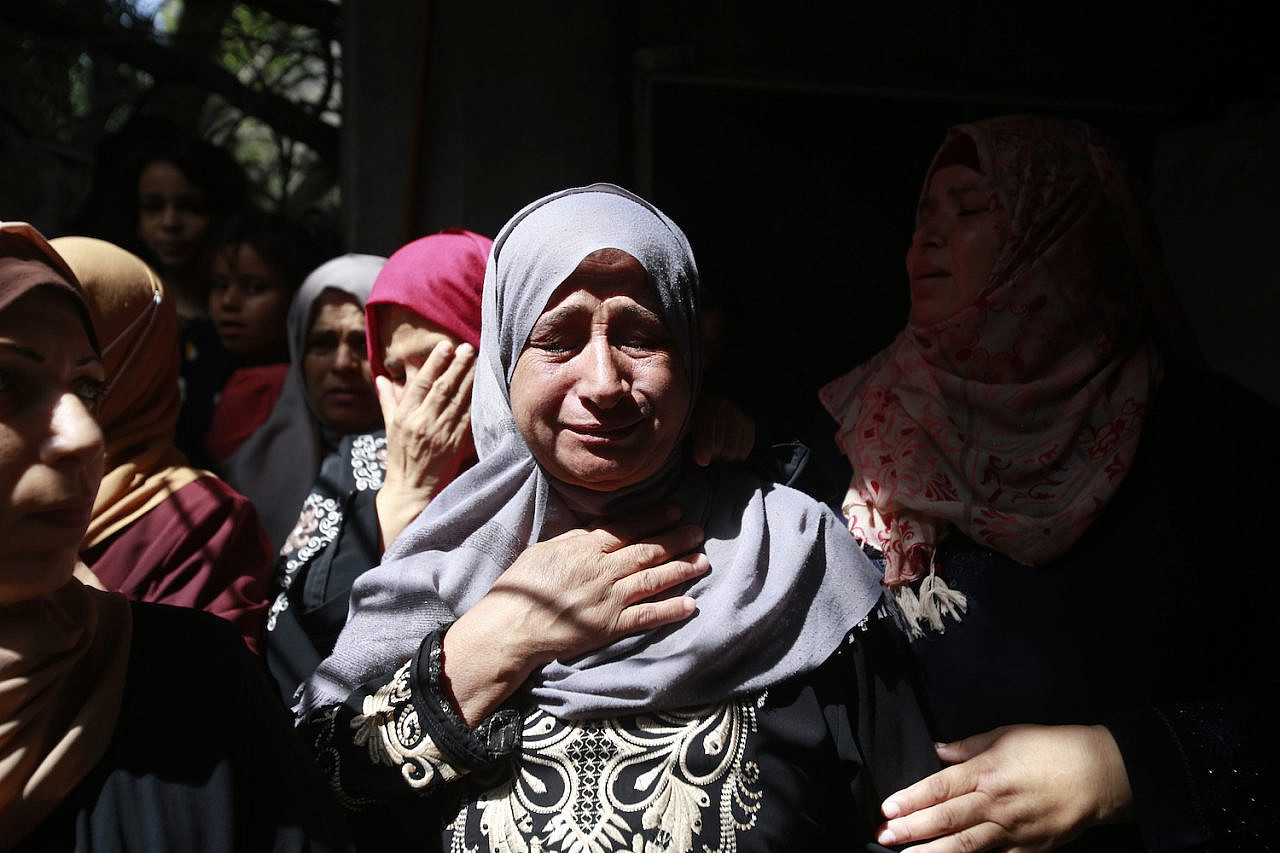 Palestinians mourn the killing of 11-year-old Hussain Hamad, who was killed in an Israeli air strike in Beit Hanoun, northern Gaza Strip, May 11, 2021. (Atia Mohammed/Flash90)

But here is what I want you to understand: we are bleeding here, anyway. Bleeding silently, all the time. Regardless of this or that war. And what is Israel doing about it? Why do I, why do we, have to choose between a quick death during a time of war, or a silent death under blockade?

You know, many of my friends in Gaza say: “Maybe it’s better to die than keep living this way, totally suffocated? What do we have to lose?” And though I understand them, I disagree. We do have something to lose. Our parents, our loved ones, and even ourselves — we might lose them all in these attacks.

Israelis, too, have something to lose. In front of the cameras, in front of the world, I heard representatives of the Israeli government say they want peace, that they seek to live together, shoulder to shoulder with Palestinians. But in fact, for years, they have been promoting a policy that is the opposite of peace. The Gaza blockade crushes any opportunity for peace.

I am worried about my family. People around me are extremely concerned now. At home, on the streets, everywhere — we are all afraid that the bombardments will escalate into an all-out war.

My brother and his wife, who live abroad, call us every five minutes to check if we are okay. All they can do is pray. My mother is severely anxious. She just ordered my younger siblings to stay at home. “What do you think, mom, that Israel can’t bomb our house?” my brother asked. “Yes, Israel can, but if we die, I want us to die together, all of us,” she replied.

I don’t want anyone to die. God, I feel so much despair right now, and I don’t know what to do.

A version of this article was first published on “Words Beyond,” an independent media website covering Gaza. It was also published on Local Call. Read it here.

Ismail is a pseudonym for a 27-year-old journalist from Gaza who asked to remain anonymous for fear of reprisal.